Veteran Disney Imagineer and artist John Hench passed away on February 5, at the age of 95. Hench had an intuitive understanding of how to use color and architecture to create an immersive experience both in film and theme park design. He was also well liked by many during his long career at the Walt Disney Company and known for his enthusiasm he brought daily to his work. 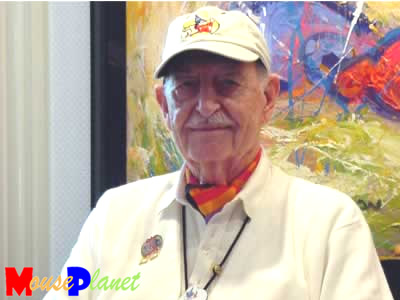 “Talk to anyone who has worked at WED/WDI [Walt Disney Imagineering] and they will say John Hench was always accessible. It mattered not your position; John was there to share his knowledge, of which we all benefited tremendously over the years.

“In my first weeks at WED, I remember being told, possibly by Roger Broggie, to 'go see John Hench.' I was somewhat intimidated by John's position, his office being next to Dick Irvine's. But I proceeded, wary of meeting the Art Director whom I had heard Walt liked to have beside him at meetings.

“I can't remember the assignment he gave me, but remember well his friendliness and willingness to involve this new, very green employee in a project. Returning to my office, I remarked to Bob Gurr how approachable John was. Bob said, 'That's just the way John is.'”

Hench was born June 29, 1908, in Cedar Rapids, Iowa, and grew up in Southern California. After completing his schooling and art training, he worked at various film jobs until coming to work at the Disney studios on Hyperion Avenue in 1939 as a sketch artist on Fantasia.

Hench was involved in all aspects of film creation—he worked variously as a background painter, layout artist, story editor, art editor, colorist and stylist on many of Disney's animated and live action classic films.

In 1954, Hench was asked by Walt Disney to join a team of artists and designers working on the plans for Disneyland. Working initially on the design of Tomorrowland, he was responsible for the distinctive “futuristic” feel of the land, especially in guiding the design of the Moonliner, and later, the design of Space Mountain.

After Walt Disney's death in 1966, Hench spent much of the remainder of his career overseeing the creation of all the Walt Disney Company's theme parks around the world, as well as Hong Kong Disneyland, now under construction. His final job title was Senior Vice President at Walt Disney Imagineering after 60 years of service at Disney. Up until the last few weeks before his death, Hench came into work every day without fail.

Because of his resemblance to Disney, he was often mistaken for Disney and would sign autographs for park visitors who thought they were meeting Walt Disney himself.

Because Hench was so intimately involved in the design and supervision of Disneyland, he spent a lot of time there along with other Disney executives. He, along with Walt, felt that it was important to experience the park in exactly the same way regular park visitors did. Because of his resemblance to Disney, he was often mistaken for Disney and would sign autographs for park visitors who thought they were meeting Walt Disney himself. 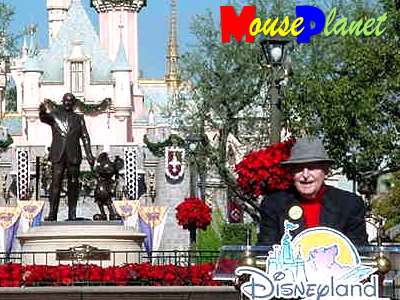 But the resemblance to Walt didn't end just there. He also had the same philosophy as Walt on how to operate Disneyland—not everything had to make money. He would point out that a popcorn wagon by itself would not make money, but in the long run, it would all even out. It was all about “show,” about creating an environment that when the sum of its parts was totaled up, would create a richer and more satisfying experience for visitors.

Hench was a master of the “Art of the Show,” a philosophy that demanded that every design element contributed to the story or helped to create a natural visual segue from one themed land to another. His philosophy was that the parks were like movies, and the designer must provide transitions between one “scene” to another; gradual changes in color and design helped to avoid making the changes abrupt. He did this most often through his legendary gift of color sense.

Hench felt that color could be effectively used to establish mood and atmosphere. In one famous anecdote, he was working on the design of an Epcot attraction with the CEO of a sponsoring corporation. The CEO insisted that the walls be white. Hench replied, “Well, I have 34 shades of white. Which one do you want?”

Hench also was a master in utilizing cultural icons in theme park design. He understood how to use images and colors that people see on a daily basis to create an instant comfort and immediate understanding of the design elements in the parks. One of his earliest successes was the design of the Moonliner. In the 1950s, people had seen various images, both real and imaginary, of spacecraft. His job was to incorporate all the images seen before into the design of the Moonliner, which would be new in design but that when people saw it, they would instantly “recognize” it. 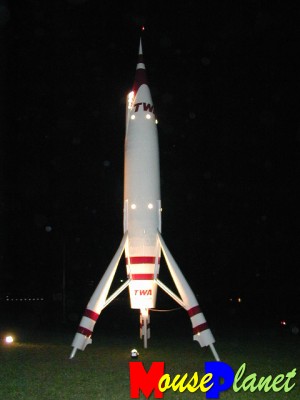 A duplicate of the original Moonliner in Disneyland, owned and restored by Disney historian and author Dan Viets, is exhibited in Marceline, Missouri during the town's celebration of Walt Disney's 100th birthday in 2001. File photo by Alex Stroup.

Another example illustrating Hench's ability to utilize cultural icons was the pylons installed at the exterior of Disneyland's Space Mountain attraction built in 1977. Reaching high into the sky, the pylons represented man's exploration of the skies above.

One of Hench's more notable accomplishments was his career as Mickey Mouse's “Official Portrait Artist.” Hench completed portraits for Mickey in 1953 (25th anniversary), 1978 (50th), 1988 (60th) and 1998 (70th). Hench often felt that Mickey's success came from the use of a series of round shapes. In Hench's book, Designing Disney: Imagineering and the Art of the Show, he stated:

“As a graphic representation, Mickey is a symbol of life. He is a series of round shapes that have a distinctive relationship characterized by the flow of one curve into another, creating lines that relate to each other in the musculature of a human being. Curves typically indicate movement typical of the living human figure. I see Mickey as a record of dynamic movement.”

Hench was also instrumental in pioneering the use of vehicles guided on a track to transport guests through an attraction. This revolutionary concept came about as a result of the initial design of the Ford Motor Company's “Magic Skyway” attraction at the 1964 World's Fair. Ford had wanted guests to actually ride real Ford convertibles, a concept that eventually turned into the Omnimover system used today in Disney theme parks and elsewhere.

It was said that because Hench was so talented, his drawings were indistinguishable from Dali's.

In 2003, Hench finally completed the work he began with Salvador Dali in the 1940s on the animated short, “Destino,” which received a nomination for Best Short Animated Film at the 2004 Academy Awards. Back in the 1940s, he worked with Dali to turn Dali's inspirations into workable animation. It was said that because Hench was so talented, his drawings were indistinguishable from Dali's. Through the backing of Roy E. Disney, the greenlight was finally given to complete the project after sitting on the shelf for almost 60 years.

Hench received many important awards throughout his career. In 1954, he won an Academy Award for special effects on 20,000 Leagues Under the Sea. In 1990, he was the recipient of the prestigious Disney Legends Award. In 1998, he received the Lifetime Achievement Award from the Themed Entertainment Association (THEA) for his 60 years of outstanding contributions at Disney.

Tributes to Hench can also be seen at both Disneyland and the Magic Kingdom at Walt Disney World in Florida. At Disneyland, Hench has a window on Main Street, located above the Main Street Photo Supply Company. The inscription reads “Plaza School of Art – Instructors Herbert Ryman, John Hench, Peter Ellenshaw.”

At the Magic Kingdom, a caricature of Hench used to be part of the mosaic mural at Cinderella's Castle before the mural had been modified to its current display. He could be spotted (wearing a red tunic with black and gold trim) in the panel depicting Cinderella trying on the glass slipper. 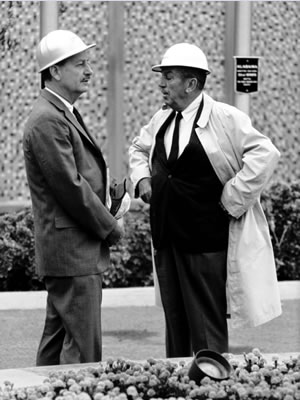 The next time you're at Disneyland or the Magic Kingdom, make sure to pause at either of those tributes to honor him for all he did to create the magic in the “magic kingdoms.” He was a true artist in every sense of the word, and next to Walt, he was the embodiment of the Disney ideal of entertainment through design, story and respect for the viewer.