For decades, Disney films dominated the animation industry. Known for quality and innovation, the Disney animation unit was revered and much copied. And Frank Thomas was one of the key individuals who spearheaded this quest for excellence. 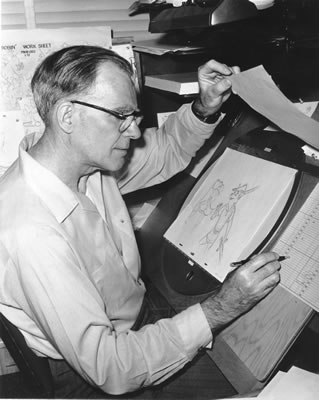 Frank Thomas died on September 8, 2004 at the age of 92, leaving behind not only his wife of 48 years, Jeannette, and his four children, Theodore, Doug, Gregg and Ann, but also longtime friend and colleague, Ollie Johnston, who is now the last of the famed Nine Old Men of Disney animation still alive.

The story of Frank Thomas and why he is considered a giant in animation cannot be told without the telling of the story of Disney animation, for these two stories are inextricably intertwined.

Born in Santa Monica, California in 1912, his family soon moved to Fresno. After high school, Thomas enrolled in Fresno State College, where he wrote and directed a short film spoofing college life. It received some success and spurred Thomas to consider a career in the arts.

Transferring to Stanford, he majored in art and while there, met Ollie Johnston, who was also enrolled in the Art Department. They were lifelong friends thereafter.

After graduating from Stanford, Thomas moved back to Los Angeles and enrolled in a local art college. A fellow student suggested Thomas apply at the Disney studios for a position as an “in-betweener,” creating the transitional drawings that show a character changing from one position to another. Thomas got the job, and in 1934 started his 43-year career with Disney.

The studio was an exciting place to be in the 1920s and '30s. The techniques of animation were just being developed and Walt Disney was struggling to raise the quality of his films. Disney was never satisfied with just being good enough; he expected his artists to do animation scenes over and over until it met his level of expectations.

At that point in the animation industry, most artists just didn't have the time to try to create realistic portrayals of humans or animals. Animated characters were not drawn accurately; there was no feeling of underlying muscle movement or weight to them. Characters would float up and down as they moved across the screen, and arms would magically grow long or legs bow unnaturally. The animators were constantly under pressure to come up with funny gags that would please an audience, which didn't leave much time to perfect their craft. And, many of the more experienced animators guarded their secrets, leaving beginners to figure out the tricks and shortcuts on their own.

However at the Disney studios, things were different. Walt encouraged his artists to share their work with each other, leading to an open atmosphere of learning from each other, which in turn led to innovation after innovation.

By the early 1930s, a series of 12 animation rules were developed that would give animated films that special Disney touch. These principles of animation transformed how characters looked and moved on screen. Ideas such as “anticipation”—depicting a specific action that cues an audience that a major event is about to occur—and “squash and stretch”—showing change in the shape of a living object as the character moves—revolutionized animation.

When Thomas joined the Disney studios in 1934, he began learning these principles and worked under the guidance of by-then veteran animator Fred Moore. During the 1930s and early '40s, Thomas first worked on animated shorts like “Mickey's Elephant,” but gained prominence as one of eight artists working on animation of the dwarfs in Snow White, most notably the scene in which the dwarfs mourn the loss of Snow White while she lays upon her bier. 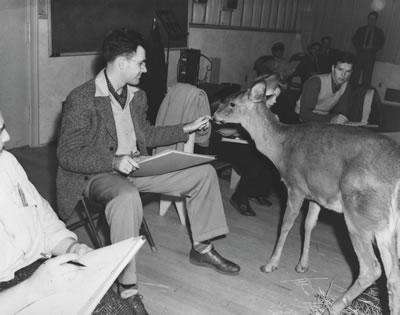 Frank Thomas sketching a live deer as model for the film Bambi. The studio often brought in animals for the artists to sketch and study. Photo courtesy Walt Disney Company.

Thomas animated the “I've Got No Strings” sequence in Pinocchio, plus worked on Fantasia, Dumbo, Bambi, Melody Time and The Three Caballeros. In the late '40s, Thomas was promoted to the key position of directing animator and supervised the films The Adventures of Ichabod and Mr. Toad, Cinderella, Alice in Wonderland, Peter Pan, Lady and the Tramp, The Legend of Sleepy Hollow, and Sleeping Beauty.

Thomas was famed for his characterizations of Lady Tremaine in Cinderella, Captain Hook in Peter Pan, the Queen of Hearts in Alice in Wonderland, and the beloved scene in Lady and the Tramp where the two dogs share a romantic dinner at Tony's. His most notable trademark was the ability to create believable characters, whether heroic or villainous.

During the 1930s and early '40s, there were many attempts to try to organize and improve the operations of the studio, but it usually resulted in the creation of factions and a feeling of divisiveness and isolation amongst the artists. Walt Disney tried to counteract this by creating an animation board in 1940 to oversee the division of work at the studio, and by 1950, the board was permanently set to consist of nine veteran animators.

Thomas and Johnson joked about this title in their book, The Illusion of Life – Disney Animation:

“We never thought of ourselves as some elite group, and the only time it even crossed our minds was when Walt made a kidding remark about his Nine Old Men being over the hill, or getting too decrepit to work, or losing all their old zip.”

Along with the finalization of the membership of the Animation Board, an important change occurred in how animation jobs were assigned. Previously, many animators would work on the same character, depending on who was available at the time. Although efficient scheduling-wise, it meant that there never would be true continuity for any character. By assigning one animator to work on one character, it guaranteed that that animator could fully explore the character's personality and emotions, resulting in a higher quality of realism.

As the 1950s, '60s and '70s rolled by, Thomas worked on 101 Dalmations, The Sword in the Stone, Mary Poppins, The Jungle Book, the three Winnie the Pooh films, Robin Hood, and The Rescuers. Thomas' final work was on The Fox and the Hound before retiring in 1978.

It wasn't all work though. Thomas was a pianist too, and in 1950 during his lunch hours, he joined up with Ward Kimball and others to play jazz music. The ensemble was named The Firehouse Five Plus Two, and for 25 years, the Disney artists recorded albums and made appearances on radio and television.

Upon his retirement, Thomas and Ollie Johnston embarked on an ambitious project: detailing the creation of animation at the Disney studios in their definitive work, The Illusion of Life – Disney Animation.

In the book, Thomas and Johnston outlined the history of animation, and more importantly what the rules and principles were that helped shape the Disney style. The phrase “illusion of life” applied not just to what the principal animator created with his own pencil; it encompassed the entire process, wherein each task enhanced and sustained the overall effect. From the background artists, the in-betweeners, the layout artists and colorists to the musicians and sound effects specialists, it was a collaborative effort.

As Thomas and Johnston stated in the book:

“The animators at the Disney studio have created many great characters over some fifty years of picture-making, characters that have motivated stories, brought sequences to life, and endeared themselves to audiences around the world. There is something of magic in the whole process that comes from the very act of creativity, individually and collectively, that transcends the single steps of production. It is more than a drawing and more than an idea. Possibly it is the love we feel for characters so heroic, so tender and funny and exciting—all of them entertaining, yet each different, each thinking his own thoughts, and experiencing his own emotions. That is what makes them so real, and that is what makes them so memorable. It is also what gives them the astounding illusion of life.”

Thomas was well respected by his fellow colleagues, and revered by those who were mentored by him and followed in his footsteps. Thomas even received an animated cameo in the film, Iron Giant, and also received an on-screen animated nod in the upcoming Pixar film, The Incredibles.

In 1995, Thomas and Johnston were the subjects of a documentary, Frank and Ollie, written and directed by Thomas's son, Ted, and is an entertaining look at these two giants of animation. [Kevin Krock's review of the DVD will run tomorrow.]

Additionally, Thomas and Johnston also have an Internet presence at FrankandOllie.com, which includes a listing of all of the films they've worked on, biographies, animation tips, plus several downloadable Quicktime movies where they discuss Disney animation.

Out of the nine animators, only Marc Davis ever received any official recognition at any of the Disney theme parks because of his direct contributions to the design and creation of Disneyland and Walt Disney World. However, much of Thomas's efforts can be easily seen at any of the parks.

Pinocchio's Daring Journey at Disneyland, the delights of an Italian dinner at Tony's Town Square Restaurant at the Magic Kingdom in Florida, or many of the other attractions based on Disney animated films would not be possible without Frank Thomas.

With his passing, another chapter in the saga of Disney animation closes. Will there ever be another golden era of filmmaking as there was at the Disney studios in the mid-1900s? Only time will tell, but certainly Thomas's legacy will continue to inspire future generations of animators and artists.

No funeral is planned; details regarding a life celebration are pending. The Thomas family has requested that in lieu of flowers, donations be made in Frank's name to the Character Animation Program at CalArts (California Institute of the Arts) in Santa Clarita, California.