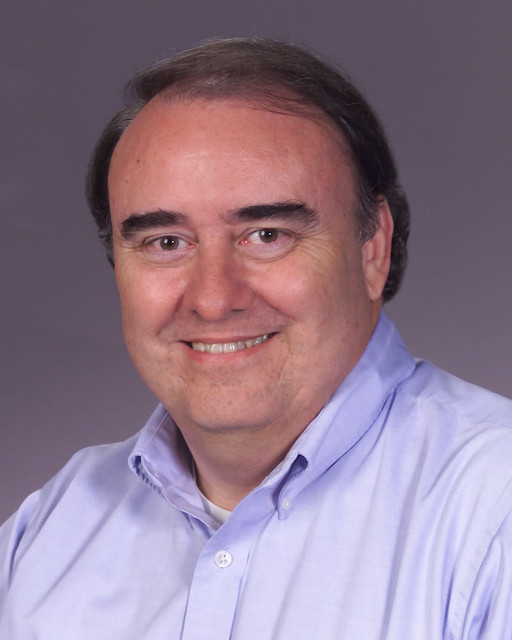 When Bruce Gordon was a young boy, he had big dreams—dreams about Walt Disney's new theme park, Disneyland. His imagination was fired up by family visits to Disneyland, inspiring him to re-create a miniature replica of Disneyland attractions in his parents' garage.

You could just picture him daydreaming about working for Disney himself as he fashioned a scale model of the Jungle Cruise. As he was working on the model, he'd be thinking that some day, if he got really lucky, those dreams could come true. Because of Gordon's dreams, the world of Disney was made the better for it. And because of his recent passing, it is now the worse for it.

Gordon was born on April 18, 1951 in Windsor, Ontario, Canada, and grew up in Palo Alto and Fullerton, California. In addition to frequently visiting Disneyland, Gordon became an avid collector of Disneyana as well. In 1980, Gordon was hired on by Walt Disney Imagineering (WDI) to work on projects at Epcot in Florida, including the Journey Into Imagination attraction in Future World. Impressed by Gordon's work, WDI assigned him to the New Fantasyland Team at Disneyland during the 1983 redo of that land. 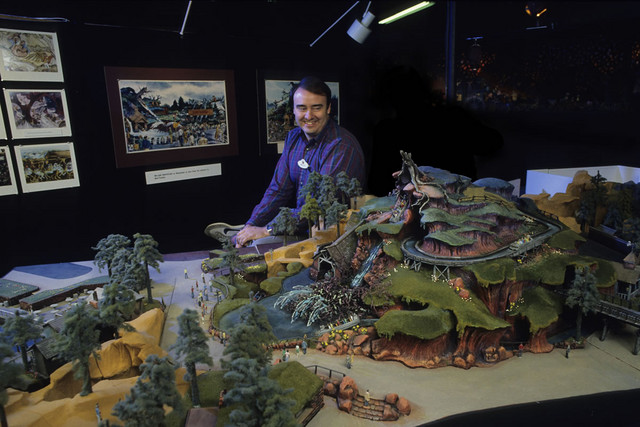 Gordon and a scale model of Disneyland's Splash Mountain attraction. Photo by Disney.

In the late 1990s, Disneyland park management began shutting down some of the older attractions that were rapidly becoming maintenance problems. Rumored for demolition was the original Submarine Voyage attraction because of the ride's aging infrastructure. Gordon joined forces with Imagineer Tony Baxter to try and persuade upper management not to shut down the ride. At one point, they even quietly installed a sign in the middle of the Sub Lagoon that read "Atlantis Expedition Imagineering Preparation Base." Although the sign was taken down fairly quickly, rumors rapidly spread across the many Disney fan sites that the Subs would be re-imaged after the Disney animated movie Atlantis: The Lost Empire. This publicity helped Baxter and Gordon delay (and finally restore) the Subs to a working attraction instead of a paved-over parking lot.

During Gordon's WDI career, Gordon met fellow Imagineer David Mumford and discovered that they not only both collected Disneyland souvenir postcards but lived only a few blocks away from each other during the same five-year period when they were young.

The two decided to collaborate on a book about Disney history based on their extensive postcard collections. Gathering anecdotes and stories from longtime Disney employees, they put together what is considered one of the ultimate reference books, Disneyland: The Nickel Tour, published in 1995 (with an updated second edition released in 2000).

Continuing their collaboration, they wrote and produced Walt's Time in 1998, a history of Robert and Richard Sherman's long career with Disney, Walt Disney Imagineering: A Behind-The-Dreams Look At Making The Magic Real (along with Kevin Rafferty, also published in 1998), and A Brush With Disney (published in 2000), which featured the art of Herb Ryman along with Ryman's notes and thoughts on his life. Their final collaboration was the tribute to artist Peter Ellenshaw, entitled Ellenshaw Under Glass (published in 2003). Mumford passed away from non-Hodgkins lymphoma before completion of the book.

According to those who knew him, although sometimes one's first impression upon meeting Gordon was that he was gruff and aloof, he actually was a very kind-hearted person and a natural born entertainer who would often tell, without much prompting, anecdotes about Disney lore and—more often than not—self-deprecating stories about himself.

During his time at WDI, Gordon made frequent appearances with Mumford at various Disneyana conventions and meetings (nicknamed the "Bruce and Dave Show"). Mumford and Gordon would give fun-filled presentations about Disney history and trivia, often marked by their throwing of Disney trinkets and even toilet paper into the audience. They would show video clips they put together about the Disney theme parks and even "home movies" about their trials in getting their books published.

Gordon wasn't just a Disney fan; he was keenly interested in other things as well. Gordon was an avid early adopter of new technology, whether it was taking along his brand new Sony AIBO toy dog to various Disney events, or being the first in line to buy one of the just-released TiVo digital video recorders. He strongly believed that keeping up with technology would keep his mind sharp and current. Another one of his areas of interest was the Back To The Future movie series. Gordon even wrote several articles on the problem of time travel and the paradox of "too many Martys" for Starlog magazine, copies of which can still be found on the Internet.

After Mumford's death, Gordon went on to write Disneyland: Then, Now and Forever (with co-author Tim O'Day, 2005) and The Art of Disneyland (with co-author Jeff Kurtti, 2005). Other publishing contributions included The Imagineering Workbook (author Peggy Van Pelt, with design and layout by Gordon, 2005), The Imagineering Way (authors "The Disney Imagineers," with design and layout by Gordon, 2005), and the six-CD boxed collectors set, The Sounds of Disneyland (accompanying commemorative book text by Stacia Martin, design by Gordon, 2005).

Gordon was also well-known for editing and/or writing many feature articles on Disney for both Disney publications and national magazines.

Books co-authored by Gordon and scheduled to be released in 2008 include:

Gordon was actively working on several other projects as well. He was serving as show producer and creative consultant for The Walt Disney Family Museum in San Francisco. Gordon was also working with songwriter Richard Sherman (and collaborator Milt Larsen) writing the book for a new musical Pazazz! Additionally, he was a co-producer on The Boys, a feature-length documentary about the Sherman Brothers and had also recently worked with Disneyland "Golden Horseshoe" performer Wally Boag on Boag's autobiography, The Clown Prince of Disneyland (expected to be published in 2008).

Gordon passed away on November 6, 2007 of undetermined causes, and is survived by his father, Walter E. Gordon, and his sister, Nancy M. Gordon.

Bruce Gordon will be warmly remembered for his Imagineering efforts and his many books documenting the Disney creative empire. He was a man who championed quality and strived for excellence in whatever project he took on. He will most definitely be missed.