The Hitchhiker's Guide to the Galaxy

I should fit the target audience for The Hitchhiker's Guide to the Galaxy: I'm a science geek who loves Monty Python. However, I must confess that I never read the novel. There is no dog-eared copy resting on my bookshelf that has been read and reread throughout the years. Watching this movie with that lack of familiarity, I now understand why some people greet the quoting of Monty Python lines with a blank stare. I'm not totally unfamiliar with Douglas Adams' writing style, having read books not contained in the Hitchhiker's series, and I did play the Infocom game back in the day, but a lot of the inside jokes were lost on me. For a full review of the theatrical release, see Alex Stroup's take here (link). 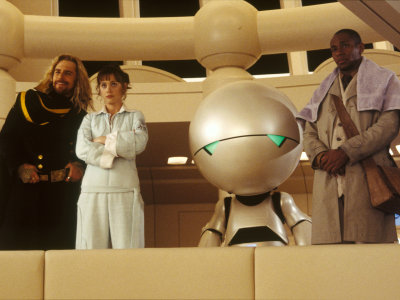 For a single disc version, Disney packed a good amount of extra material into this release. There are two audio commentary tracks. The first commentary involves actors Martin Freeman (Arthur Dent) and Bill Nighy (Slartibartfast), director Garth Jennings, and producer Nick Goldsmith. This commentary revolves around discussion of what it was like to film the movie, and all involved have a good rapport, making for an interesting viewing. There are several amusing anecdotes involving Mos Def's penchant for falling asleep between takes, even while strapped to a post with rubber bands. Mos also appears to have a strange way of running that was a great source of amusement on set, getting a mention in this commentary and the next.

The second commentary is with executive producer Robbie Stamp and Stan Solle, who was a colleague of Douglas Adams. There are many interesting insights into Adams' creative process, and discussion of how the Hitchhiker's world came about. The pair also point out references to the previous incarnations of the material as radio program, book and TV series. The second commentary provides information to those less familiar with the book, but is much less boisterous than the previous track.

The behind-the-scenes segment is very short, coming in at just under nine minutes. There are interviews with all of the actors who portray the main characters in the film, as well as insight from the director, producer and Warwick Davis (“Willow”), who was the actor inside Marvin. I would have loved to have seen more behind-the-scenes details, especially from the Henson Creature Shop creative team.

The deleted scenes don't have any commentary or context as to why they were deleted. I didn't get anything out of them. The really deleted scenes on the other hand, were the source of some amusement. They're listed on the back of the package as “fake” deleted scenes, and are made to look like outtakes from the film. 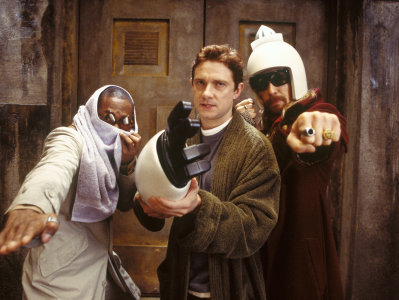 Marvin's Hangman game might amuse younger children, but it wasn't all that entertaining for me. You guess letters one at a time to try and ascertain the word that Marvin is thinking of, accompanied by appropriate comments from Marvin.

Finally, the sing-along song allows viewers to follow the flipping dolphin as you sing “So Long and Thanks for All the Fish.” This bit is essentially the opening scene of the film, with the words along the bottom of the screen so that everyone can sing along karaoke-style. It is a catchy tune, so be careful or you might have it stuck in your head for a day.

The interface and menus are designed to emulate the graphics used for the Hitchhiker's Guide in the film. Each page also has an Improbability Drive button that when pressed, sends the viewer to a seemingly random point in the DVD, to view snippets from the bonus materials. There's even one segment that shows the cartoon Deep Thought was watching.

The audio is excellent. All of the dialogue is clear and understandable and the music and special effects come through well in the Dolby surround sound presentation—you can even hear the sound of pansies impacting the ground.

This DVD will definitely appeal to longtime Hitchhiker's fans, although most of them will likely have already purchased it. It may also appeal to those not familiar with the book, but who enjoy quirky comedy or science fiction. There's nothing objectionable in the film, and the PG rating makes it safe to view as a family, although some kids might be puzzled and/or bored by the seemingly random nature of the story. For those unsure if they will enjoy the film, it might be better to rent first rather than investing the money only to discover that it all just seems too improbable for you.