I had relatively high hopes for this movie. First of all, it was directed by Mark Dindal and produced by Randy Fullmer, the same duo that helped shape The Emporer's New Groove into a quirky movie that I find particularly humorous and enjoyable. Second, the voice cast looked to be quite a powerhouse, with big names like Zach Braff (Chicken Little), Garry Marshall (Buck Cluck), Joan Cusack (Abby Mallard), Harry Shearer (Dog Announcer), Don Knotts (Mayor Turkey Lurkey), Patrick Stewart (Mr. Woolensworth), Wallace Shawn (Principal Fetchit), Fred Willard (Melvin, the Alien Dad), Catherine O'Hara (Tina, the Alien Mom), Patrick Warburton (Alien Cop), and Adam West (Ace, the Hollywood Chicken Little). Third, the animation generally looked pretty good from the clips that I had seen in ads and online, and given the competition, top-notch CGI animation is a reasonable expectation from Disney. Finally, our own Alex Stroup said in his review (link) that Chicken Little, "is not a bad movie," which carries a certain amount of weight, particularly if you know Alex. So, the potential certainly seemed to be there for this movie, and I was very interested to see how it would stack up against the Pixar gold standards. 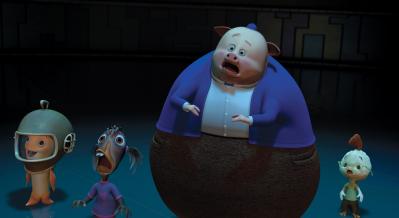 Well, the movie does indeed have the Dindal/Fullmer feel to it, so while it has the anticipated host of visual and verbal common-cultural-reference jokes that easily connect with both adults and children. However, several gags feel very familiar, and to a certain degree, it seemed like I was watching Chicken Little's New Groove. While the jokes worked quite well with my 7-year-old and 5-year-old, several parts of the movie just felt too rehashed and borrowed to me. Then, as Alex mentions in his review, the voice cast seems rather underutilized, and several of the characters listed above do not really have more than a few lines. Garry Marshall does a great job as the dad, and everyone else is right on target with their characters. It was almost as if the voice cast was too strong across the board, and I ended up wanting to hear more from folks like Don Knotts, Patrick Stewart, and Catherine O'Hara.

For the most part, the characters are interesting, and the animation is quite colorful and lively. With regards to the CGI animation, though, nothing particularly jumped out and wowed me, as is my expectation with Pixar films. It looks like Disney was simply using available CGI technology rather than trying to push it, and that may contribute a bit to the rather "average" feel and look to this film. When I think of the animation in Pixar films, I instantly think of scenes like the snowstorm and door vault in Monsters, Inc., the luggage conveyors in Toy Story 2, the wonderful textures and grass animation in A Bug's Life, and much of Finding Nemo and The Incredibles. Unfortunately, nothing like those come to mind with Chicken Little, and more importantly, nothing in the story seemed compelling enough to utilize or require groundbreaking animation. 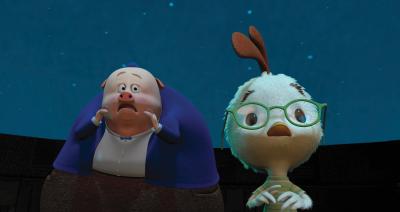 In the end, my young children definitely enjoy the movie more than my wife and I do, and I completely agree with Alex that, while not a bad movie, it is just not particularly memorable and does not quite stand up against Pixar's filmography. In the long run, like many of Disney's recent theatrical releases, it will most likely be relegated to an extra challenging MouseAdventure trivia question along the lines of, "What 'Little' Disney computer animated feature film was released in 2005?" Don't worry, we'll try to make it easier than that...

As has been the disappointing trend with Disney's DVD releases over the last couple of years, their focus has been less on special editions and cool bonus material and more on the sheer quantity of movies released. When I look back over what bonus material Disney used to put on DVDs, even Lady and the Tramp 2, a so-so direct to video release, has more bonus material than the Chicken Little DVD. Besides the rather mundane set-top game and music videos, there are only two other compelling bonus items.

The first is a series of deleted scenes, including three alternate openings for the movie. Some of the deleted scenes are almost completely animated, showing just how late in the process some of these were cut, but it is rather clear why they were cut. As is typical with deleted scenes, some are more interesting than others, but I always find it interesting to see the directions the story took before it was finalized. It is a nice little addition to the disc. 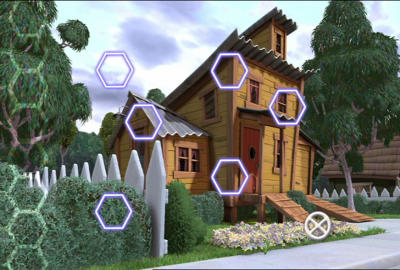 The second goody is an 18-minute "Making of" featurette that does a nice job of summarizing the entire production process, from story development to a day in the life of the director. It is presented in a relatively straight forward manner, with only a little of the wackiness exhibited in the Emperor's New Groove bonus material, but both young and old should find the featurette interesting. I have also found that many "Making of" featurettes do a decent job of clarifying or explaining why certain decisions were made during the production, and in some cases, the improved appreciation for the process helps you enjoy the movie a bit more. It did in my case, and I hope Disney makes a more concerted effort to plus-up their DVDs with this kind of material, just like they did only a couple of years ago.

While the overall volume of goodies has decreased on Disney DVDs over the years, at least the quality of the audio and video transfers for recent theatrical releases has remained consistent, and generally, Disney DVDs present the main content with pleasing anamorphic widescreen video and impressive Dolby Digital 5.1 surround soundtracks. This is certainly true of Chicken Little, and there really are no significant presentation issues that would distract anyone from enjoying the movie. Even the interface is well themed and right on target. It is a very nice presentation package, and it will look and sound good on any home theater system.

This one falls squarely into my "take-it-or-rent-it" category. It is a great presentation of an average Disney movie, so if you loved the movie in the theater and will be watching it repeatedly, then you will enjoy the DVD and will probably find it worth picking up for your video library. However, if you or your children found it mildly entertaining or were looking for a bonus laden DVD, then you may still want to at least rent this one for a family movie night.