For anyone living under a rock the past 17 years, The Little Mermaid follows the story of Ariel (Jodi Benson), the fun-loving daughter of King Triton (Kenneth Mars), the ruler of the seas. Disregarding her father's order to stay away from the world above the sea, she swims to the surface and rescues the prince of her dreams. Longing to be human, she strikes a bargain with the sea witch Ursula (Pat Carroll) and trades her fins and beautiful voice for legs. According to the witch's contract Ariel has three days to persuade the prince to kiss her and earn her legs for good. Of course, love conquers all in this film that began a renaissance in Disney animation and virtually saved the whole animation department from probable extinction in 1989. It grossed almost $180 million domestically, and went on to become one of the top 10 best-selling animated films of all time on VHS.

The importance of The Little Mermaid to the Disney company cannot be underestimated. The company's previous releases were 1985's Black Cauldron, 1986's The Great Mouse Detective and 1988's Oliver & Company. All did lackluster box office and were critical disasters. The animators had been moved to trailers on another part of the Disney property and a huge management change had taken place. New executives Jeffrey Katzenberg and Michael Eisner, along with Roy Disney and Frank Wells encouraged/goaded the animators to find new stories and ways of telling them. 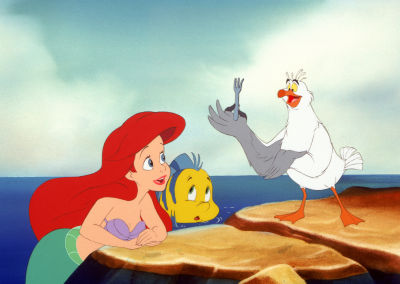 All those changes mixed together to form a creative environment that hadn't been felt at the studios in years. Then along came Howard Ashman to put the spark to the mix. The entire Little Mermaid Platinum Edition DVD is basically a tribute to Ashman, who passed away in 1991; almost everyone who is filmed or recorded commenting on the film acknowledges that The Little Mermaid could not have been made without him. Almost every aspect of the film bears his fingerprints; from casting and coaching the vocal performances, rewriting dialogue and entire scenes that were not working, consulting with animators to develop the look of the film, to creating unforgettable lyrics. The partnership of Disney and Howard Ashman seemed unlikely on the surface, but was exactly what the company needed to infuse fresh ideas and life into the foundering division.

One expects quality bonus features on a platinum DVD and The Little Mermaid does not disappoint. Disc 1, besides the film, contains "Kiss the Girl" music video (3:30) by Ashley Tisdale, Disney Song Selection, and audio commentary by co-writers Ron Clements and John Musker, and composer Alan Menken. The music video is self-explanatory, but the song selection option is a nice feature that allows you to go straight to your favorite song in the film and add lyrics to the bottom of the screen if you wish.

The audio commentary is well done; not too technical or dry, and not too jokey or gimmicky. Though the writers and Menken are pretty low-key, they have a gold mine of insights to every aspect of the film and impart some fascinating trivia along the way. I did not know that Ariel originally had another sidekick—Breaker the dolphin—until the writers decided to infuse Ariel with some of Breaker's characteristics and leave the dolphin on the drawing board. A very nice touch is the addition of audio interviews with Howard Ashman talking about various scenes and characters as they appear in the film. Another nice touch is each of the commentators introducing himself as he makes a comment—and not just at the beginning of the film—throughout the commentary. I usually get distracted trying to guess who is speaking at any given time during a commentary.

Disc 2 contains the bulk of the goodies and bonus features. Among them:

Under the Sea Adventure: a Virtual Ride Inspired by Walt Disney Imagineering (4:20) – This is an amazing look at an attraction that never made it past the drawing boards and scale models of Disney Imagineers. Animators have taken the models and proposed story boards and created the attraction from the point of view of a guest boarding a sea shell vehicle and heading right into the virtual ride. One can then revisit the ride with narration by Tony Baxter (5:15), who explains the various scenes in each room and the reasoning behind each effect. Finally, viewers can experience the attraction in concept, model or animated form with a click of the menu keys (5:55). It's a bonus feature especially interesting for fans of the Disney theme parks, and one wonders why such a brilliant concept never was green-lighted ( because, seriously—who one would miss Pinocchio?)

DisneyPedia: Life Under the Sea (8:25) – Nothing spectacular here, but an interesting featurette about some of the sea creatures that inspired the animators of the film.

Treasures Untold: The Making of The Little Mermaid (45:25) – This is a brand new feature about the development of The Little Mermaid, and this bonus feature is worth the price of the DVD alone. What I appreciated most about this feature is that it did not white-wash the truth about the problems in Disney's animation department before The Little Mermaid, and brought in all the key players to comment on the making of the film and it's ultimate success—even those who have left the company and gone on to other projects. Most surprising is the appearance of Jeffrey Katzenberg, who is not only given a lot of screen time but is also given a lot of credit for shaking up the department and bringing a fresh creative spark to the company.

I guess the old adage is true—time heals all wounds; though I wonder if Katzenberg would have as much visibility on the DVD if Michael Eisner were still in power. Either way, it's great to see almost all the contributors assembled. In addition to Katzenberg, many others make appearances and comments, including John Waters, Nora Ephron, Frank Oz, Jodi Benson, Pat Carroll, Glen Keane, Roy Disney, and Alan Menken. Here again, Howard Ashman is given much of the credit for the success of the film; in one instance, voice actors Pat Carroll and Jodi Benson recount how they lifted all of Ashman's expressions and tones from the demo recording he would make of the songs. This is truly a rich and satisfying bonus feature for those of us who have been starved on direct-to-DVD remote video games and music videos.

Deleted scenes and Alternate Ending (24:30) – Each of the deleted scenes are introduced by John Musker, co-writer of The Little Mermaid. Most of the deleted scenes are minor and never made it past preliminary sketches and crude animation, and many of them are just longer versions of songs that made it into the final cut of the film. The alternate ending begins with the climactic scene of the battle with Ursula at sea leading to the eventual wedding of Ariel and Eric; nothing earth-shattering in the changes that were made, but the writers felt a different pacing and tweaking was needed with the relationship between Ariel and Triton.

The Little Match Girl (7:10) – The Lion King co-director Roger Allers directed this animated short which was originally intended for Fantasia 2006, a project that was scrapped. Hans Christian Anderson is given the writing credit, and the film is not edited to give a feel-good ending as The Little Mermaid was. All I can say is have the tissue box handy; this is one of the most beautiful and moving Disney films I've ever seen, all seven minutes of it.

Storm Warning: The Little Mermaid Special Effects Unit (8:40) – This is a featurette giving behind-the-scenes insight to the storm sequence at the beginning of The Little Mermaid with commentary from effects animators, who refer to themselves as "the blue collar workers of the animation department." Many interesting bits of Disney film trivia are offered by the animators, such as how some of the visuals for the storm were lifted directly from classic films such as Bambi and Dumbo from the research library archives at the studio.

The Story Behind the Art (11:30) – This is an interesting featurette about Hans Christian Anderson's life, relationship to the stories he wrote, and discussions about the changes that Disney made to The Little Mermaid to make it less of a tragedy and more of a love-conquers-all fable.

The interface is simple and workmanlike. Each disc has a theme for menu choices. The first disc is Ariel's world, with underwater scenes of fish and merpeople swimming through the menu. The second disc features the world of humans and Eric's castle with rolling clouds, seagulls, and the occasional dolphin jumping from the sea. One thing that was a bit irritating were the starfish that mark the menu choices. I found they did not quite match up with the item I was trying to select, so I made a few false moves trying to navigate the material. This might be a little confusing to children trying to navigate to specific menu choices. 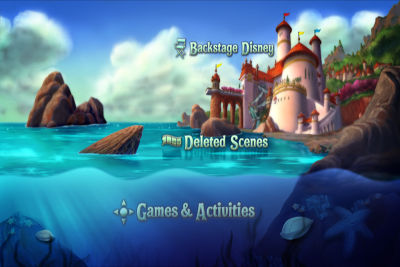 The Little Mermaid was shot on film versus being created directly in digital files like today's animated films. For the new DVD release, digital artists examined and cleaned each and every frame of the movie. The result is stunning. The colors and images are so much better than anything on VHS or the previous DVD release; even better than it looked in the original theatrical release. Some of the aspects of the background art I never noticed in viewing the original versions now fairly pop out of the screen with color and details.

The audio is remastered in 5.1 Disney Enhanced Home Theatre Mix. Since I do not have surround sound I could not tell any vast difference in the new format, but the songs and sound effects are clear and crisp. Even the older audio tapes of Howard Ashman in the commentary come though as though they were recorded at the same time as the other commentaries.

Remember all the times I begged you to save your DVD pennies until something really good came along? This is the quality release we've all been waiting for, and the best part is that the price is comparable to some of the throw-away direct-to-video sequels floating around on the market today. Although some viewers may feel annoyed at having to buy yet another DVD of the same movie, I feel the upgrade in this case is worth the price. Not only do we have a much improved digital restoration, but the bonus features are extensive and detailed. Enjoy it and we'll cross our fingers that the upcoming platinum release The Fox and the Hound gets The Little Mermaid treatment as well.