I love this movie. My whole family loves this movie. There is just so much about this movie to enjoy, even if cars are not your "thing." As a testimonial to this, for those unfamiliar with the movie, I'll direct you to Alex Stroup's adept review of the movie that he posted back in June during its theatrical debut. 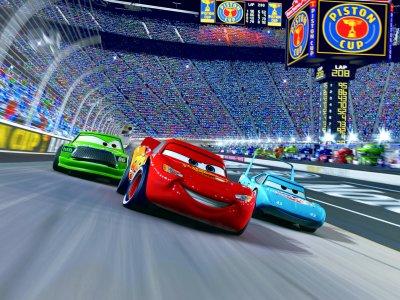 Given that review, it is clear that, if a movie is strong enough to foil Alex's prejudices, it must be pretty good. I, however, was less surprised by how much I enjoy this movie, as I just do not expect anything less than an enjoyable, humorous, touching, and gorgeous movie from John Lasseter and his amazing crew. The fairly straightforward storyline has such a wonderful blend of memorable characters, beautiful environment, multi-layer humor, and strong emotional ties that it just sucks in my family any time it is on the screen. I never thought it was possible, but this film holds the attention of my 8-, 5-, and 2.5-year-olds for all of its almost two-hour run time, which also says a lot about a movie. Pixar and John Lasseter never cease to amaze me with their solid storytelling and jaw-dropping visual imagery, and I just hope that Pixar can maintain its independent dedication to producing outstanding films, now that its corporate environment has significantly shifted. Keep up the good fight, John.

This is where things get a bit ugly for me. I tried being rational about it, but this particular issue got personal.

What has the world come to? Has the Earth's rotation slowed or reversed? Was there an abnormal amount of cosmic radiation directed at Burbank several months ago? Or, is this just one of the first examples of Disney's corporate bean-counting influence on Pixar, now that it's a division of Disney? What happened to Pixar's historical "DVD! ...We LOVE DVD!" and "Super-Genius" kick-tush DVD collections? Hmmmm?

When I first heard about the early rumors that Cars was being released as a single-disc DVD, I thought, "No, that must just be one of the versions that is being released. Pixar wouldn't just release that! It looks like they forgot to post the collector's edition information." Then I saw the official press release, and nothing changed. Well, here we are with a single-disc DVD release, and I'm still disappointed to no end about the minimal bonus material, if you couldn't already tell. There is so much about this movie that both my boys and I want to hear and see more about, that this meager collection of goodies just does not do the movie or Pixar's efforts justice.

Disney did this with Lilo & Stitch on DVD, and that ticked me off, too. You start with these incredibly visually stunning, beautiful, fun movies, record tons of research, compile tons of background information, gather tons of production stories, drawings, models, and so on, and it is all perfect for DVD bonus material. Then, for whatever reason—financial being the most probable root cause—they are all dropped with the seeming corporate hope that they'll never need to release them. Both of these movies were so big that a huge number of discs were going to be sold regardless of how much extra bonus content was added or a relatively minor price differential for a double-disc edition, but rather than releasing a fully loaded, classic Pixar-style DVD collection, Disney seems to have decided to cash in on the movie and eek out a minimally goodie-laden, single-disc edition.

Come on! Where is the fun, informative, insightful commentary? Where are the cool digital models and funny rendering errors? Where is the story behind the story development? Where are the in-depth interviews with all the talented folks that contributed to this film? Where are the early presentation reels, storyboard-to-final-film split-screens, progression reels, character designs, and on and on? Heck, the trailers were not even included!

Whoa. Breathe in. Breathe out. Put on "Mater and the Ghostlight"and "One Man Band," again. OK, so not all is hopeless.

So, given my strong expectations about what should be on a "typical" Pixar DVD, just how are the goodies that did make it onto the disc? Well, there are really just four brief items of interest: two animated shorts, a short documentary, and a series of four deleted scenes.

If you saw Cars in the theater, then you are already familiar with the very entertaining short, "One Man Band," which preceded the film. For those that have not watched this, you really just need to see it to fully appreciate this classic duel between two one-man bands for a cute little girl's coin. It is beautifully animated, and it packs quite a bit into its brief four and a half minutes. A definite must-see.

The all-new animated short, "Mater and the Ghostlight" is very cute and funny, and my whole family loves it. The short opens by showing us how Mater loves to sneak around and scare the other cars in Radiator Springs. One night, though, Mater gets his comeuppance and finds out just how funny it is to be on the other side of road. It is a very nice addition, and actually holds up pretty well, from a parent's perspective, under heavily repeated viewings.

The other two items, the 16-minute documentary and 10 minutes of deleted scenes, were just enough to whet my appetite for everything that went into this movie. The short "Inspiration for Cars" documentary touches on many of the production aspects and some of the interesting human characters Lasseter and crew uncovered during their research trip along Route 66. In the end though, it left me feeling like there was so much more behind the making of Cars than what was covered in the documentary, and I now have more questions about the production after watching it than I did before!

As for the deleted scenes, they also hint at interesting directions the story took before landing on the final arc, and it would have been nice to get a bit more of the background than the very short introductions provided by Lasseter. Yes, they are nice mini-plusses for the disc, but relative to Pixar's historical DVD releases, this disc falls very short of my expectations.

Yes, I have heard the grumbling from the masses before. For some folks, even these few bonus items are more than they want or expect from a DVD, but that is what DVD is all about: the movie and the metadata all in one place. There is so much development history to these films that the bonus material is the only way to truly appreciate the effort and teamwork that goes into making an animated feature.

Additionally, most of us have watched Pixar and its talented crew develop over the years, and we have historically had an incredible opportunity through DVD bonus material to peer into this unique and passionate group and meet the storytellers, artists and technical wizards on a very personal level. As an example of this personal connection between production crew and viewer, my young boys now recognize faces and can rattle off names of "Pixar guys," such as John Lasseter, Pete Docter, Andrew Stanton, Joe Ranft, and others because, through my boys' goodie-watching experiences, they feel like they have made a connection with and know more about the folks that created their favorite movies. It is all about personal connections with Pixar, and while lightly touched upon in the documentary, that very personal connection is sorely missing from this disc. It is something that set Pixar apart, and I do not want to see it disappear into a corporate void.

The Audio, Video and Interface

For all the rather negative feelings I have about the lack of bonus material, the movie looks and sounds absolutely amazing. At least the presentation of the movie met every expectation I had for such a visually and aurally stunning movie. Similarly, the user interface is perfectly themed, and even the sneak peaks screen is cute and fits in with the rest of the disc. Overall, the presentation is right on target and will look and sound good on any home theater system.

I am conflicted, which is an unusual position for me to be in with a Pixar DVD release. My family and I absolutely love the movie, the animated shorts, and the top-notch presentation on this disc. However, the lack of bonus material on this disc is a very sore spot, and I hope a collector's edition is released on DVD at some point in the near future. I also hope that Disney is not holding on to it as a high-definition release for next year, but I could see that as a distinct possibility to spur Disney's Blu-Ray sales, which is another rant/debate all to itself for another time.

So, until either the future of Disney high-definition becomes a family price-range reality or a collector's edition DVD is released, those of us hoping for more bonus material will just have to accept the possibility of being double-dipped down the road and pick up this disc to tide us over. For those of you solely interested in a great movie with a great presentation package, do not hesitate to pick up this disc, too, particularly if repeated viewings are in your future.