High School Musical is the gift that keeps on giving, both to Disney's coffers and preteen kids everywhere. The show went on the road at the end of 2006 and toured the country, ending in May 2007. All the original cast was reassembled, save for heartthrob Zac Efron, who, according to press releases about the concert, was already committed to filming Hairspray. His filming conflict conveniently paved the way for singer Drew Seeley to join the tour and provide vocals for Efron's character, Troy. What percentage of vocals he provided is up for debate, but my guess is around 99 percent. 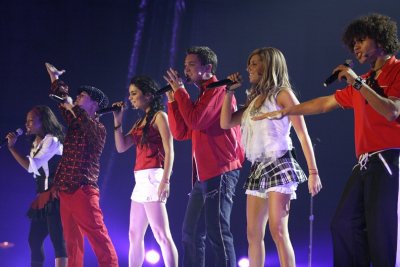 I have a feeling that the producers of High School Musical had no idea the enormous hit they had on their hands and assumed no one would even care who was doing the actual singing. However, the music climbed the Billboard charts and Seeley was added to the credits. I'm sure he was glad to have his moment in the spotlight. High School Musical: The Concert showcased all the songs from the movie, including Seeley's, and provided free advertisement for many of the other star's solo careers. Ashley Tisdale, Vanessa Hudgens and Corbin Bleu all got to have some alone time in the spotlight with songs from their respective albums.

Lucas Grabeel served as M.C. for the concert, and most of the stars spoke into their microphones at different points during the concert, only proving that the sound guys knew to turn the equipment on and off at the appropriate moments. Judging from the high energy choreography and heavy breathing from the cast, it looked like most of the concert was pre-recorded. My daughter even pointed out an instance in a song where the performer was supposed to be singing but was inhaling instead. This doesn't spoil the show for most fans, who either don't notice the lip-syncing or who understand the reality that dancing full-out and singing in perfect harmony is a skill only mastered by seasoned Broadway professionals.

When High School Musical: The Concert toured last summer, I briefly considered taking my kids to see it. Then I thought about the huge crowds of screaming kids, the ant-like quality the figures on the stage would have from our vantage point way up in the nosebleed section, the blatant lip-syncing, the highway robbery of tickets and memorabilia prices, and promptly decided to "rent the concert DVD when it comes out, or at least Tivo it."

High School Musical: On the Road

This is an entertaining, if brief look at a typical day in the life of the cast while touring during the concert. Lucas Grabeel is a likable host and shows the camera crew around the dressing rooms, make-up room and quick change area below the stage. He also gives a look into one of the many tour buses. The boys and girls each have their own bus, and it looks like the non-stars have their own as well (I wonder if it's as swanky as the headliners' buses.) This extra is just about the only reason a fan would be motivated to buy the $20 DVD, but if you price it out, it comes to around $4 a minute—not the best deal by my calculation. 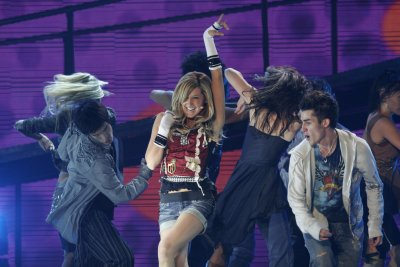 This extra allows the viewer to choose from four different camera angles during any particular song by clicking their remote. There is a backstage camera that shows the performers getting ready to enter the stage area, crowd shots, and close-ups of the stars during their solo numbers. This could have been really cool, I suppose, but I found myself frustrated with trying to get the camera angles to switch over quickly. After a while I gave up and watched the songs from the backstage angle, which seemed the most interesting to me. Another disadvantage is that the main window playing the camera angle you have selected uses less than half the screen , giving one the feeling of watching it on a small, portable DVD player. I lost interest after a few songs and went back to the full screen versions. I guess I'm not that much of a control freak that I need to choose each camera angle while watching a movie.

Someone must really, really want Jordan Pruitt to be the next big Disney Channel thing. She was given the prime position of opening for High School Musical: The Concert, without a whole lot of credentials compared to other acts that have albums with Disney. To be fair, she does have songs in the Disney Channel movies Jump In!, Read it and Weep, and Air Buddies, but she doesn't seem to have caught on as the Next Big Star. I felt a little badly for her, watching her opening set. She didn't get to have any props or cool costumes or... anything, other than a large banner with her name and picture on it. I also suspect the cheering crowd sounds were added in; whenever the camera panned over the crowd during her numbers, the kids seemed to be barely awake. Saving their energy for the headliners, I suspect.

The DVD is presented in 1.33:1 and 5.1 Dolby Digital. I'm sure the look and sound of the concert is of much higher quality than anything fans heard at the live concerts. The interface is pretty low-tech and chintzy—still images of a basketball scoreboard are used over sound clips from the concert.

Just so we're clear, I love High School Musical and almost everything to do with the franchise. However, my patience is wearing a little thin. Disney is milking the cow so dry little pieces of hay are squirting into the bucket. I can't recommend anyone spending $20 on 57 minutes of material, especially when I'm certain the very same material will be playing on the Disney Channel once this DVD has been on the shelves for a few months. However, if you feel cheated that you were not able to attend the actual concert, go ahead and rent it and spend an hour seeing what you missed. As for me, I'll be glad when the Disney Channel unveils High School Musical 2 and Disney will finally have something new to market.