The Aristocats is the animated musical adventure about a pampered Parisian house cat and an irrepressible alley cat that join forces to foil a diabolical pet-napping plot. Wolfgang Reitherman, who directed The Jungle Book and all of the Winnie the Pooh features, gathered all of the best and most distinctive voice talent working in animation at that time and created a film that is a bit short on plot but long in memorable characters and songs. Hearing Eva Gabor, Phil Harris, Sterling Holloway and others having such a great time voicing their respective characters is what makes this film a classic in the Disney cannon. 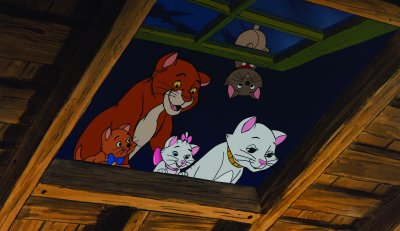 Originally released in 1970, The Aristocats came out four animated movies after the masterpiece Sleeping Beauty and four movies before The Fox and the Hound (decidedly not a masterpiece). If you were a kid in the late 1960s and early 1970s as I was, you have fond memories of The Aristocats, despite its flaws. I actually had a vinyl record with the soundtrack and dialogue from the movie, which I memorized. Watching the Special Edition DVD dredged up some of those old sound effects, orchestrations and bits of conversations in my musty memory. Even kids who never saw the film in the theater or even on a VHS tape recognize the most famous song from the movie Everybody Wants to be a Cat, sung by Phil Harris, Disney's go-to man for iconic voice work in the late-1960s and early-1970s.

Disney Virtual Kitten – As far as remote games go, this one is a little more entertaining than the average game. With a click of the remote you are able to choose a kitten and take care of it using different commands. If you anticipate your kitten's needs for 10 tries, you get a "special surprise." I won't spoil the surprise, but the fun of the game is actually playing it, not in the "surprise." The enhanced virtual kitten game can be accessed by the computer, and is a little more detailed in the game's animation and features, but basically the same concept. 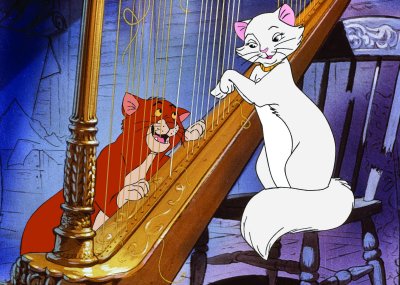 The Sherman Brothers – This is a short featurette about the great collaboration between Disney and the Sherman Brothers, who were responsible for so many of the memorable songs in Disney animation. This section concentrates primarily on their contributions to The Aristocats and how they persuaded Maurice Chevalier to come out of retirement to sing the title song of the film. Richard Sherman does a mean Chevalier impression, by the way.

Cartoon Short: "Bath Day" – This short cartoon was first released in 1946 and features Figaro the cat from "Pinocchio" and Minnie Mouse as Figaro's owner. It's a borderline filler feature, but the cartoon is sweet and nostalgic and I can't bring myself to criticize its inclusion in the extra features.

Deleted Song: "She Never Felt Alone" – This is easily the most interesting goodie on the disc. Richard Sherman explains the background to the deleted song and where it was to be used in the movie. Madame Adelaide Bonfamille was to sing the first part of the song to Duchess and the kittens at the beginning of the film to establish why she valued her pets enough to bequeath her estate to them. A version of the song exists sung by Hermonie Baddeley, the voice of Madame Bonfamille, and is backed by color and pencil-drawn storyboards. The last part of the song was to be sung by Duchess to Thomas explaining why they had to hurry back to Madame. This section was recorded by Robi Lester, who was the singing voice of Duchess and a absolute copy for Eva Gabor. Instead of using the song, the director decided to have Duchess speak the lyrics to Thomas instead of singing them.

"The Great Cat Family," hosted by Walt Disney – This was a program that aired on the "Wonderful World of Disney" television show September 19, 1956. This feature might be considered filler material, since it does not directly relate to "The Aristocats," but the animation is very entertaining, and to have it narrated by Walt Disney is a little icing on the cake. 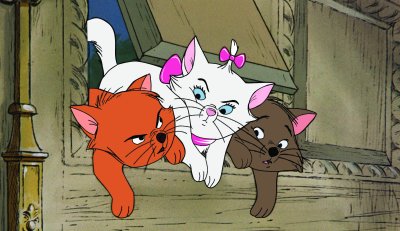 The Aristocrats Scrapbook – This feature is a compilation of color and black white images that were the basis of the film. The scrapbook is put together in a pretty basic format, but contains lovely artwork.

The interface for the DVD is a short clip of the jazz cats playing the instrumentals for "Everybody Wants to be a Cat" with the menu displayed next to the old upright piano. Its simple but effective, and since there are not many extra features on the disc, everything is very streamlined and easy to use. The film is produced in 5.1 Dolby Digital Surround Sound and is very crisp and clear, especially the songs and orchestrations. The aspect ratio is 1.75:1. The film has been digitally enhanced and never looked better, not even in its first theatrical release.

Even though the extras are sorely lacking, The Aristocats is a must for any feature animation fan. If you did not acquire the film during its first DVD release in 2000, now would be a good time to add it to your collection. I'm disappointed Disney didn't see fit to give this film the Platinum Collection treatment, but a little "Aristocats" is better than nothing in my book.