First, a disclaimer: I'm a big-time Jane Austen fan, even going so far as to make the pilgrimage to Southern England to visit the various historical shrines to my favorite author. Luckily it's a very good time to be an Austen fan, there has been an increased interest in her work and in the various adaptations of her novels (on both the large and small screen) even before Colin Firth's Darcy took that fateful dive into Pemberly's pond in 1996. Becoming Jane is one of the few movies that is biographical in nature and speculates on the situations and relationships that may have prompted the themes in her novels. 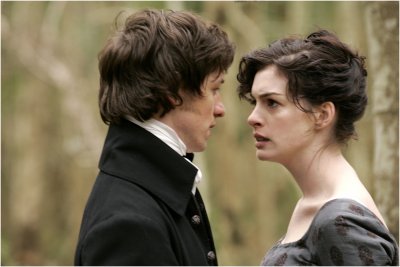 The movie focuses on Jane when she is 20 years old, before she has begun any of her adult fiction, and highlights many of the similarities between her life and the lives of the characters in her most famous novel "Pride and Prejudice". Jane (Anne Hathaway) and her family are country folk without a lot of money or connections. They live in the rural county of Hampshire where their father is the rector of the local parish and part-time farmer. Tom Lefroy, (James McAvoy) a law student, has been exiled to Hampshire by his uncle and benefactor for his wild ways in London. Jane and Tom meet, and, a la Elizabeth and Darcy, begin by disliking each other and end by falling in love. Like Darcy, Tom's family condemns the match because of Jane's low connections, but unlike Darcy, Tom is not independently wealthy and depends on his uncle's continuing good will to make his way in life. Austen's real-life romance does not have a happy ending, and the movie implies that Austen writes so that her characters may have "all that they desire" and so fulfill her dreams through them.

I have mixed feeling about Becoming Jane. I loved the filmmaker's choice to use rural Ireland as a stand in for Hampshire in the late 1700s. The country is breathtaking and untamed, as it would have been in Jane's time. I also loved 99 percent of the cast. James McAvoy could create chemistry with a tree stump and does not disappoint as the impulsive and passionate Lefroy. Jane's parents, played by James Cromwell and Julie Walters, are three-dimensional characters who get exasperated with their talented but unconventional daughter, yet still try to protect and understand her. Maggie Smith plays the wealthy aunt of a prospective suitor of Jane's (can anyone say Darcy's overbearing aunt, Lady Catherine de Bourgh?) and is masterful as usual. I especially liked Anna Maxwell Martin as Cassandra, Jane's beloved sister who was also disappointed in love.

I had no problem with how the plot condensed and elaborated on events in Austen's life to make a more interesting story, it's a fictional movie not a history lecture. The problem for me lies in the casting of Anne Hathaway as Jane. It's not just that she is American; I enjoyed Gweyneth Paltrow in Emma and in Shakespeare in Love. She does not master the accent enough for me to suspend disbelief and accept her as Jane. I'll give James Cromwell a pass, as he's not the title character, but Jane is as English as plum pudding and needs to sound it. I also had the feeling that they assembled a fantastic supporting cast and then looked around for a famous young actress (who had a big fan base with young people) to get people in the seats. I think Hathaway is one of the most beautiful women on the screen today and a good actress, but she seems out of place among the other actors cast. 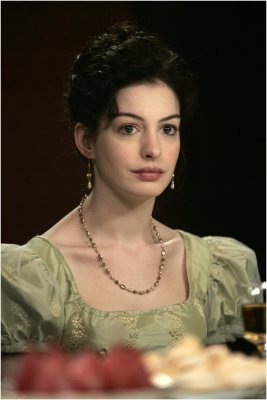 The bonus features spend time with scholarly types who endorse Hathaway as Jane in order to convince crabby people like me that the accent doesn't matter, that she captured the "spirit of Jane," but I'm still unconvinced. The good news is that I was able to enjoy the movie despite the misgivings I have about Hathaway as Jane. She and McAvoy have some nice moments together, and his Lefroy is always interesting to watch.

Rather than a historical look at Jane Austen's life, this bonus is more of a "making of" featurette peppered with historical types who, in between information on the filming of the movie, pop in to wholeheartedly endorse Ann Hathaway as Jane, or the historical accuracy of the storyline.

This is most likely the most elegant pop-up edition I've ever seen. Soft green boxes with stately scrolls appear regularly to give facts on Austen's life and the filming of the movie. The facts were interesting and worthwhile; the only problem I had was that at times there was too much information in a tiny font and I was not able to read all of it before it disappeared. I felt like an elderly person trying to read subtitles without my glasses.

The audio commentary is chock full of interesting tidbits from director Julian Jarrold, producer Robert Bernstein and screenwriter Kevin Hood. All three have done their homework in wanting to portray an accurate depiction of Regency England and of Austen's life. When the story varies from Austen's actual life, they are quick to point out the differences and give explanations why. The commentary is so much more than the usual "this actor was the greatest ever?.such a joy to work with?..everything worked out so well?" It's well worth a listen.

The deleted scenes are offered without comment from the director, but are interesting in that they are still in rough cut form with the boom mike just over the actor's heads as they play the scenes, and at times someone off camera is giving prompts to the actors. 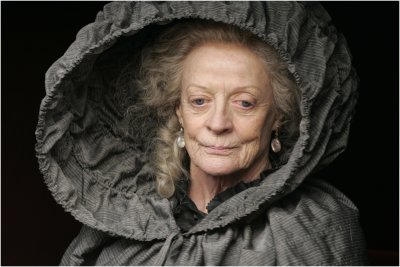 The movie is presented in Dolby Digital 5.1 Surround Sound. The film does not have any car chases, explosions, or cannon fire to surround you with, but the musical score and sounds of nature are encompassing, I suppose. The film is only presented in wide screen and looks lovely, doing the rural locations in Ireland full justice. The interface includes dreamy shots of Jane strolling through the countryside accompanied by the movie's soundtrack.

If you are an Austen fan and can accept the casting decisions, you will probably enjoy Becoming Jane very much. Non-Austen fans or those who don't obsess over her life and writings will also enjoy learning about her life and might be inspired to get to know the historical facts. Admittedly, this is a story of doomed love with a bittersweet ending, putting it squarely in the chick-flick or date night category. Hey, it's better than sitting through Cinderella II: Dreams Come True with your grade-schooler for the third time.