Think about it. You're a Disney theme park cast member picking up trash and a guest comes along and asks, "What time is the 3:00 parade?"

What does it mean? More important, what is your reply?

Before we answer that question, let's set the context. As we hinted in our clue last time, the 3:00 parade at the Magic Kingdom at Walt Disney World is one of the most attended attractions/events. More people will experience the parade then will set sail in Pirates of the Caribbean or will take flight in Space Mountain. Thousands of people crowd the parade line, and there's lots riding on that experience. What do we mean? 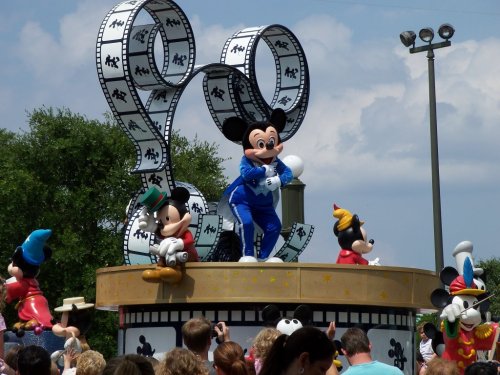 "What is your 3:00 parade?" How committed are you to making it happen?.

Understand that at some point during their stay, guests must connect (or reconnect) emotionally to Disney. For newcomers, it may be the first time they set eyes on Cinderella Castle. For some individuals, it's a meet-and-greet with Mickey Mouse or their favorite character. Others may connect emotionally through a magical moment with a cast member. But if they haven't had that moment by 3:00 in the afternoon, they want to make sure it happens before the parade passes by. That's because there's a lot of guests that head out of the park after the parade. Some go back for a swim at their hotel and return later on. But many of them leave and they don't come back. So it's critical that there's an emotional connection with the guests before they head out the gate.

Therefore, so much depends on the 3:00 parade. That's why Disney works very hard to make the 3:00 parade as special as possible. This includes the following [Note: For those who love the Magic, know that there are some mild spoilers ahead that reveal how the magic happens]:

Considerable design and preparation go in the creation of the parade. The 3:00 parade may only be changed out every 6-7 years because the average guest will only see it once or twice during that time. At Disneyland and Tokyo Disneyland, the parade changes out much more often because they draw more on local crowds returning often. Creating a parade that can occur day after day requires great attention to the building and upkeep of floats. It requires the creation of multiple costumes as well as the upkeep of those costumes. New music is written and recorded. A large staff of performers is hired, with training and choreography beginning weeks prior.

Beyond this, every day there's enormous preparation.

From the moment you arrive you are reminded of the 3:00 parade. Your tram hosts will talk about it. The monorail captain will mention it. Even your Jungle Cruise skipper will joke about it while waiting to re-dock. 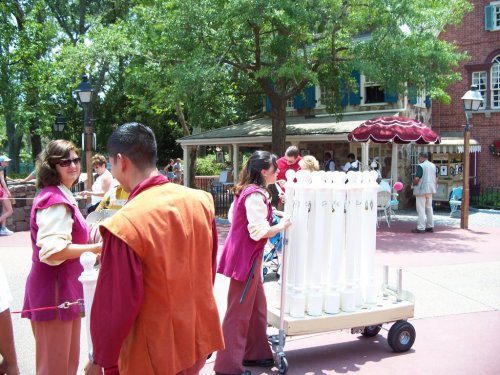 Cast members from Adventureland prepare for the upcoming parade in Liberty Square.

In the hour prior, preparations are underway along the parade corridor. Signage is posted. Rope or tape is lined along the route. To ensure that the parade succeeds, they utilize a lot of cast members from throughout the park to support guest control before, during, and after the parade. And as important as the rule of staying in your themed area with the costume you have, they suspend that policy for purposes of supporting the parade. Therefore, it's no surprise to see a Space Mountain cast member helping guests along Main Street. 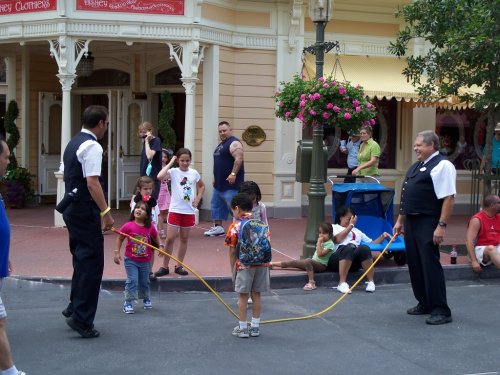 Jump rope, hula hoops, beach balls, and the Hokey Pokey all helps to pass the time.

Cast members will interact with guests by inviting them into games of jump rope or efforts to perform the "wave." The intent is to not only pass the time away, but to keep guests from leaving. And the Walt Disney World Band along with a Parade Grand Marshall (another Magic Moment) will file through the route prior to starting time. This will help to clear the parade route. 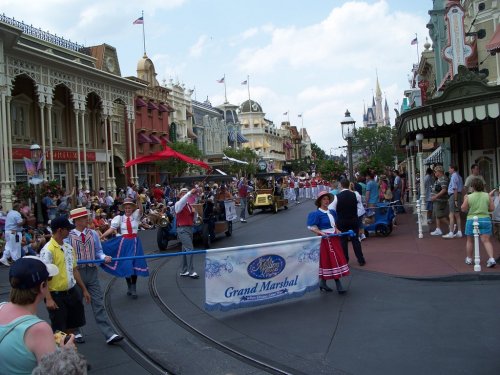 The Grand Marshall sets the stage for the parade to follow.

While you're busy watching this, you may not notice that windows are opening along Main Street, Liberty Square and Frontierland. These windows open electronically in preparation for the parade, Behind their opening speakers are in place. When the parade concludes, wait a few minutes afterwards, and you will see these same windows generally closing. 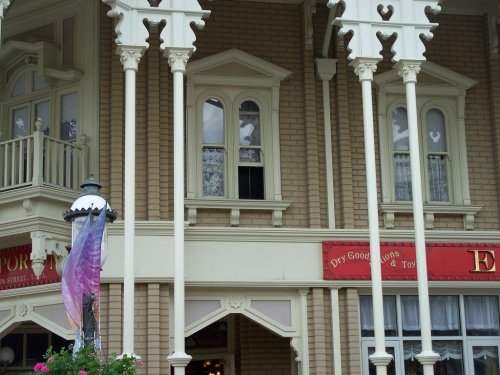 When the parade comes through, it must be an emotional wow. Again, technology support this. If you walk along the parade path, you'll see what may appear to be used gum embedded into the asphalt. No, maintenance isn't slipping. These are electronic diodes that have been planted into the street. They monitor each parade float as it passes through. Nothing is more boring than sitting through other town parades back home and having to wait on and on for the next band or float to pass by. To create a tight, emotional experience, the parade is directed from a small room underneath Peter Pan's Flight. Adjacent to where rides and attractions for the entire Magic Kingdom are monitored, the small cubicle contains both video images as well as electronic images of the parade passing through. It is from this location that parade float drivers are directed in their paces to slow down or speed up. It's what keeps the parade from falling apart. 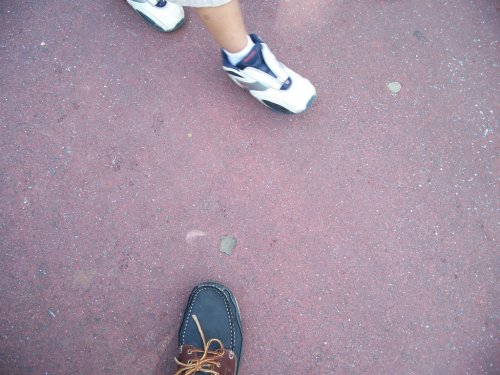 Small diodes like these line along the parade route.

Meanwhile, upstairs, there is a wonderful, dedicated group of cast members who work their hearts out to bring magic into the parade. Most of them are young, but not all. They came to work in the parade because they themselves were connected emotionally to the Disney experience when they were younger. Now they give back with everything they have. Keep an eye on those that are "face" characters. Look how they give eye contact to so many along the route. 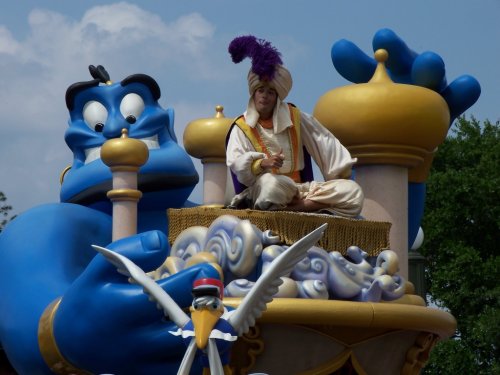 Face characters like Aladdin are critical to connecting with the guests.

The current parade was designed so that face characters would lead many of the segments of the parade. Study the Fairy Godmother. On most days that role is filled by one of the most amazing people who have ever worked for the Walt Disney Company. I believe she is probably as worthy of receiving a window on Main Street as any individual who has sacrificed for the organization. I won't reveal her name or personal history, but I will assure you that no one has in a one-on-one way single-handedly touched the lives of guests—especially children, than she has. Study her carefully. She communicates magic. And guests respond. 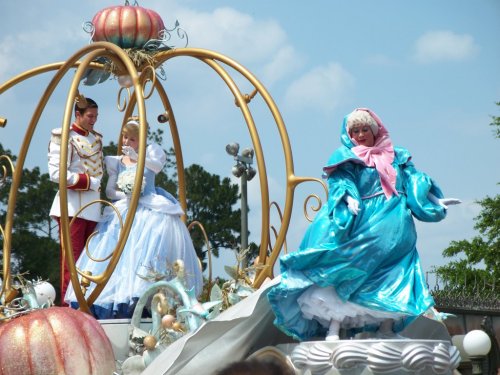 It's a sign, but many long term cast members know that the fairest of them all may well be the Fairy Godmother skating past you.

All of this combines to create an amazing experience. And if you watch the guests during the experience, you see that a great many leave feeling the pixie dust. Many simply line up behind the parade and join the procession. 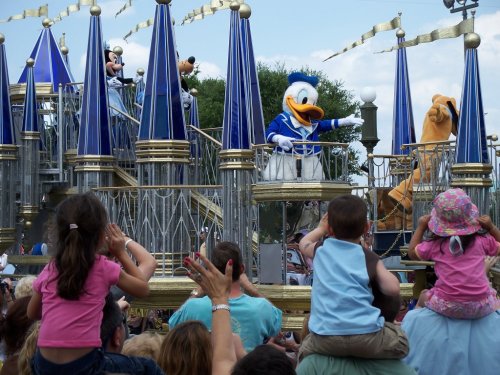 Clearly, before the parade passes by, there are those who have connected with all things Disney.

One more thing: There's a simple but fascinating place backstage that guests on stage seldom see. As performers step out, there's a line painted on the asphalt just before it intersects with Splash Mountain. That line represents the line of sight for guests on stage. Before that line, behavior is strictly backstage. But cross that line and you're in character and you stay in character. If you're Mickey, you're Mickey. If you're Snow White, you're Snow White. If you're a dancer, you dance from that line until you cross the line backstage behind City Hall. It's amazing how persistent they are until they cross that line. And stepping over the line at the end of the parade, you are greeted by backstage cast members who quickly bring you fluids, and helps those in heavy costumes to get out quickly. All of this teamwork, to help make sure that the experience is as magical at the end of the parade route as it is at the beginning. 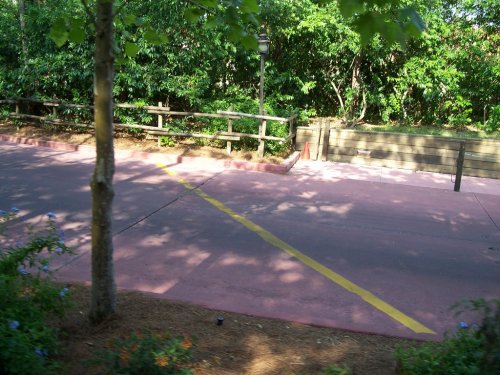 This line is just prior to step out in Frontierland. Trains do not work during the parade so as to not interfere with the parade launch.

All of it combines to create a tremendous emotional event for guests.

So let's back up. It's another 45 minutes before parade start and someone approaches you as a cast member and asks, "What time is the 3:00 parade?" What do you say? I'll give you a hint: The answer is not "3:00."

For one thing, consider that the parade begins on one end of the park in Frontierland, and then moves to Liberty Square, up in front of the castle, and on down Main Street. It actually takes the better part of an hour for the parade to completely go through. The question on its own has merit.

You have to take time and inquire. You might ask: "Well, where are you planning to be at that time?"

They might reply, "Well we were going to head over to Goofy's Barnstormer." Your response might be, "Well perhaps you might want to take the train before 3:00 p.m. and stake out a place near Town's Square. There will probably still be some good places to see the parade without having to wait too long."

That's so much better than simply stating "3:00 o'clock."

But of course, this article isn't just about Disney. It's about your business as well. So ask yourself: What is your 3:00 parade question? What is the obvious kind of question your customers ask, and what does it mean?

What is your 3:00 parade moment? In other words, what is the one emotional moment where you can connect to your customers? When's the moment they become emotionally connected by you?

How do you create, anticipate, and carry through that 3:00 parade moment in your organization come alive each and every time it happens? How do you train your employees not to answer the obvious, but rather seek to understand your customers?

Every business can and should have its own 3:00 parade moment. It's the opportunity to connect with others in a way that makes your business stand out. So share. If you have a 3:00 parade moment, let us know about it. Let us know what you do to create incredible experiences for the people you do business with.

Until then, we hope you find magic in your own business.