Bump the Rat or Use Every Part of the Rat

"Bump the Rat" or "Use Every Part of the Rat"

So Pirates of the Caribbean: At World's End has passed its $500 million mark in the first 20 days and Disney is now looking to Ratatouille. We know by now how to spell the name of this Mediterranean soup. So the question is: How good will it—the movie, not the soup—be?

To answer that, let's go back in time to Disney's "The Small One."

"The Small One"? You mean the short where the donkey's carrying Mary to Bethlehem? Yep!

A day or two after the wrap party for the film, director Don Bluth walked out of Walt Disney Productions with half of the new animators to start his own company. These artists claim that he and others were frustrated with the quality of the work and the conditions at Disney. But the other half of the team that remained included individuals like Lasseter, Clements, Musker, Keane, and Bird. While young apprentices, they stayed on to do The Fox and the Hound. The film, delayed by those walking out, ended up doing modestly well for Disney. And in time, they would all be part of even greater projects at Disney. But by then new hands came on board to run the company at executive levels. And those new powers had something much bigger in mind. They not only wanted to reinvigorate animation, but the company as well.

While many projects were commenced by CEO Michael Eisner and studio chair Jeffrey Katzenberg during this time, one of the most ambitious was Who Framed Roger Rabbit. At this critical point in the history of the Walt Disney Company, Eisner and Katzenberg signed on Steven Spielberg, Robert Zemeckis, and Richard Williams to do this unusual film. The intention behind this project was to do something much better than what was being done at the time they came aboard.

To create the animation, over 85,000 hand-inked and painted cells were created and composited with the live-action backdrops, live-action characters, and hand-animated tone mattes (shading), and cast shadows using optical film printers. There was no computer animation used in creating the animations. Some scenes involved up to 100 individual film elements. Any live-action that had to be later composited was shot in VistaVision to take advantage of the double-area frame of the horizontal 35mm format. All of this was done so that the finished film thus would not suffer from the increased grain that plagued previous live-action/animation combos such as Mary Poppins or Pete's Dragon.

Perhaps one of the most subtle places where this occurs in the film is during the "Bump the Lamp" segment of the film. If you recall, when Eddie takes Roger Rabbit into the back room at the bar where Dolores works to cut apart the hand-cuffs, the lamp from the ceiling is bumped and set into a swinging motion. The lamp did not have to be bumped. In fact, lots of extra work was needed to make the shadows match between the actual room shots and the animation on Roger for what resulted as very little viewer benefit. 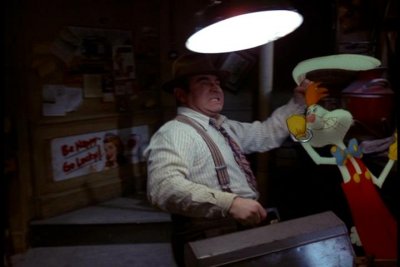 But this scene became a mantra for the film. It was the moment Disney was going to depart from the mediocre efforts of the past and "bump the lamp." Few viewers really appreciate the subtle shade differences that occur across Roger during this scene. Most of us dismiss it as some computer effect. But there were no computers doing this kind of work back then. And yet the effect is what makes the entire movie, and not just this scene, succeed.

So emphatic was this new mantra, that Michael created a welcome video for all new cast members attending Disney Traditions, an orientation that is more about culture and heritage than it is about policies and procedures. In this video, Eisner walks through the "Bump the Lamp" piece and himself emphasizes that Disney is all about paying attention to the details others wouldn't pay attention to.

In short time "Bump the Lamp" was used by many Disney cast members throughout the company. It became the notion of going that extra mile just to make it a little more special even though most viewers or guests will never notice it. It was used for several years until it was replaced by another introductory Michael Eisner scene after The Lion King came out. It showcased the rain and water effects in the river after a scene with Rafiki, but there was no mantra expression like "bump the lamp" and so it never really took hold.

"Use Every Part of the Buffalo" 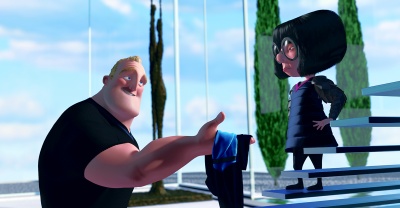 Enter Brad Bird at Pixar, director of The Incredibles. He had experienced critically acclaimed success with The Iron Giant. Prior, he had been classmates with John Lassetter in the first year of a character animation school at CalArts—the California Institute of the Arts, in Valencia. And at one time, they were working for Walt Disney Productions on The Fox and the Hound. But by this time, John Lassetter and Pixar was known for Toy Story, A Bug's Life, and Finding Nemo.

And on this new wave of success, John wanted to bring in Brad Bird.

In Brad's own words:

"When John Lassetter, Steve Jobs, and Ed Catmull talked to me about coming up here they said we're worried about becoming complacent. We want you to come in here and kind of shake it up a little bit.

"For them to ask me to do that when they had nothing but successes was amazing to me."

Yet that's what Pixar wanted... to take it to the next level. As Brad came on board, he created a mantra for making the movie the very best it could be. That mantra was placed on a light board above the entrance to his office. It stated: "Use Every Part of the Buffalo." Again, in his words:

"Well the Indians—the American Indians—used to when they killed the buffalo they didn't just eat the meat. They ate the meat. They used the hide. They used the bones for arrow heads, they used every part of the buffalo. They didn't waste anything. So when I say "Use Every Part of the Buffalo" it means managing everything to get the most out of it."

Brad came off of The Incredibles when Ratatouille was already in production. But the director of the film, who had previously created the short "Geri's Game," was let go, and Brad was asked to come aboard this work in progress. Brad signed on, and we will see the results on June 29. Can Brad "bump the rat" this time around? Can he "use every part of a rat" when it comes to fixing a film half way through the production process? We will find out soon. Meanwhile, ask yourself:

Here's hoping that Brad Bird pulls off another success for Disney and Pixar. And here's to your success whatever your endeavor may be.