Holding Down the Bridge

Holding Down the Bridge 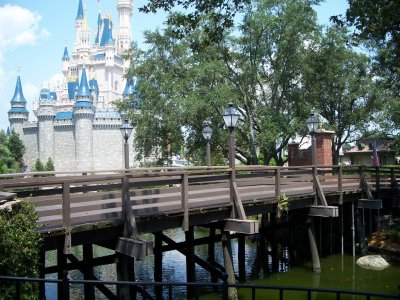 One of the really great experiences for office management at Disney is the opportunity to work in the parks during the heavy holiday and travel seasons. This tradition, a part of the Disney culture, dates to early years. It even existed in a similar form during the company holiday party. At one point this was a single evening after-hours party at The Magic Kingdom at which management served the front line staff. That no longer exists at Walt Disney World, but old-timers discuss it fondly.

Beyond the holiday party, however, management was expected to be out in the parks, supporting the heavy seasonal crowds. Typically the scenario during the holidays was for management cast members to sign up for a particular responsibility on a particular date. Those who had previously worked a given park role, could return to that role as long as they were still competent. Such roles might include operating the Jungle Cruise or driving the Walt Disney World Monorail. The rest of us, especially individuals like myself who had never been in a front line position, would be asked to do the simplest of jobs: picking up trash, washing dishes, stocking shelves. Several of my colleagues would do anything to get out of it; personally, I enjoyed it immensely. I loved to interact with the guests in the park, and would often bring Disney "critters" - those small plastic character figurines - to give away to guests as the occasion permitted.

The purpose of this activity was 3-fold:

First: Bring all hands on deck. With crushing crowds, it was simply a situation that everyone was needed to help serve the guests.

Second: It was a great way of cutting costs and not having to hire so many additional seasonal employees.

Third: Managers would learn much about their operation, particularly about how to better engage employees and serve customers.

I worked many a park shift during my tenure at Disney, but one in particular has always stood out. It was New Year's Eve and I was tasked with helping tidy up at Pinocchio's Village Haus. This consisted largely of moving cleaning trays and tidying up tables and chairs. I carried out this task for several hours until the restaurant started to slow down. I was then asked by management to help out along the parade route for a late night run of The Main Street Electrical Parade. I was sent to the bridge at the entrance to Liberty Square. The bridge was designed to be wide enough to handle the influx of guests coming to and from Liberty Square, but it was not designed to allow parade viewers to line each side of the bridge while the parade passed by. That meant that some 30-45 minutes before the parade made its way through, we needed to close off the bridge and tell guests to travel an alternate route.

Here were the options we would explain to guests who wanted to cross the bridge: 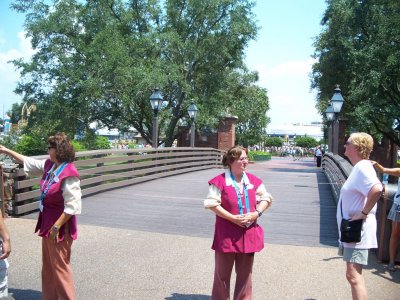 Cast Members holding down the bridge for the 3:00 parade.

#1: Backtrack through Liberty Square towards the entrance of Frontierland. Cut through the corridor where the restrooms were, then meander through Adventureland until you came out of that entrance. This option is not that long to traverse, but it was difficult to explain to guests who did not know the park that well and were not familiar with those thematic corridors that linked Frontierland to Adventureland.

#2: Turn left, head toward the castle and work your way around. The problem with this is that during the parade there was no real exit back onto Main Street from Cinderella's Castle, nor at the Tea Cup corridor straddling Fantasyland and Tomorrowland. For this route to be successful, you would need to essentially work you way through Tomorrowland until you could come back through on the opposite side of the hub. This option was particularly painful for families with small children and strollers.

The long way out around Fantasyland and Tomorrowland. Artwork copyright Disney.

Did I mention it was New Year's Eve? Holding down the bridge was a challenge. The three of us were expending all our efforts explaining to people why they could not come across the bridge as the parade was heading this way. "I want to exit the park!" was the typical statement, and explaining how to do so was arduous in a mob scene. The two others accompanying me on the bridge had pretty much resorted to pointing towards the path leading to Cinderella's Castle. I tried to offer more detailed directions, but it wasn't easy. Also, many of the guests spoke no English. Fortunately I could speak enough fluent Spanish to give explanations, but it was still painful. All we could do was to make the best of it.

As this was occurring I kept thinking, "There must be a better way." The obvious answer was to cut a path or build a bridge directly from that point over to the Adventureland entrance. I made inquiries with parade management as to why we hadn't created a better pathway between the entrance of Liberty Square and the entrance of Adventureland. A small backstage corridor exists for cast members, why not guests? The responses were not satisfying. They ranged anywhere from "that's how it has always been" to "no one in management ever listens."

Those responses suggested a culture where employees for that area were not being engaged in resolving customer situations. It suggested an "old school" paradigm of "just do what you're asked". I wondered if parade management had ever had the experience of holding down the bridge. I certainly imagined that they would have, but how could they have gotten to this point where so many guests would be left frustrated. I myself had no authority over this area of operation. All I could do as a cast member of the Disney Institute was to exert my influence and voice my concern to management.

From this experience, there are lessons for each of us in our own operations:

Do you as management get in the trenches with your employees and experience what they experience? You will learn more than you ever could from mere observation. You'll also save yourself a little in labor costs.

Do you help support customer service at peak times when help is needed? I can't tell you the number of times I have seen crushing crowds at a big box store and management is just looking on when they could have taken a till and opened an extra line.

Are you engaging employees to bring outstanding issues to the forefront and help develop solutions? Do they feel they can take action themselves, or is decision making in the hands of management only?

There is a happy ending to this story. It turns out that about 14-18 months later a beautiful bridge was constructed between the entrance of Liberty Square and Adventureland. It is a perfect solution for guests wanting to exit the park from that side of the property without having to go around. 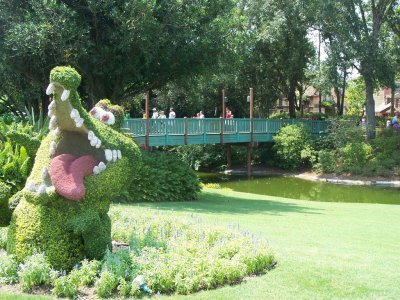 The new bridge as seen from the entrance to Adventureland. A topiary of the crocodile from Peter Pan composes the foreground.

Now I would like to say that I had a hand in that bridge being built. That perhaps my influence played a role. Unfortunately, I can probably take no more credit for the bridge than Al Gore can take credit for the Internet. But I fancy myself as possibly something of a domino in that decision, which was probably built from annual monies each park is given to improving guest service. For all my wishes, I would love to see it named after me in the same way other managers get a window on Main Street. We could call it the Kober Korridor! 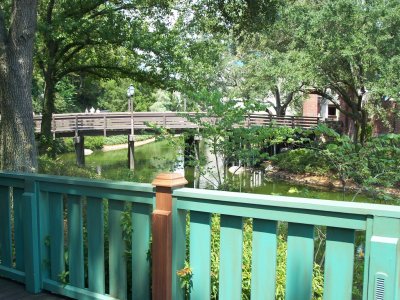 Looking from the new bridge onto the bridge at Liberty Square. Perhaps we should call it Kober Krossing instead of Kober Korridor?!

Meanwhile, what are your dreams? Engaging those you work with and satisfying those you serve are some of the best dreams of all in the workplace. So here's to finding magic in your own organization.