Today, let's look at some things that you might not know about Walt Disney World. Some of them are little-known features, and others can probably be considered secrets.

One of the best-known “secrets,” though not always easily found, are Hidden Mickeys. At some point, Imagineers started hiding the image of Mickey Mouse (usually his head, but sometimes his whole body) throughout the parks.

The largest of these would be the original Hidden Mickey at the Disney-MGM Studios, where the entire plaza in front of the Chinese Theater is his head, Echo Lake is one ear, and the other ear included the roof of the Starring Rolls Bakery and some of what is now Sunset Boulevard. Of course, some development on Sunset Boulevard and, more recently, the construction of the Sorcerer's Hat (known by some as the “BAH”—Big A** Hat ) have somewhat diluted the image. 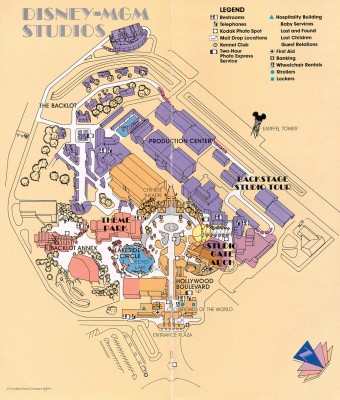 This park map from a 1989 Guidebook shows how much more obvious the hidden Mickey at the Studios was before the construction of Sunset Boulevard and the Sorcerer's Hat. The portions of Mickey's face that are shaded grey were painted black on the ground and on the building roofs. Image © Disney, 1989.

A smaller example of a Hidden Mickey might be the three-circle shape of the flowers in the purple vine next to the elephant in the Africa room of “it's a small world” in the Magic Kingdom. There's also the oddly shaped full-body Mickey in the mural over the entrance to Body Wars in the Wonders of Life pavilion, and the Viking wearing mouse ears in the mural behind the loading area for the Maelstrom, all in Epcot.

There are also “decorative Mickeys,” which are not designed to be hidden, but rather part of the decoration, such as those cut into the backrests of chairs or designed into grillework.

Let's look at Main Street in the Magic Kingdom for some more interesting things. Easily spotted, but also easily overlooked, is the heart with Lady and Tramp's footprints in it in front of Tony's Town Square Restaurant. Tony's as you remember, was the restaurant behind which Lady and Tramp had their famous spaghetti and meatball dinner. 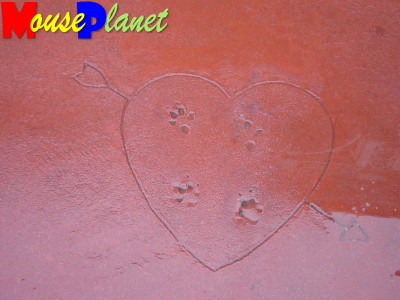 While J.M. & E.B. are nowhere to be seen, it is still obvious that Lady and the Tramp have visited this spot in front of Tony's Town Square Restaurant at the Magic Kingdom. MousePlanet photo by Mark Goldhaber.

A little further down Main Street, we pass the Blue Ribbon Bakery. Notice the smell of fresh chocolate chip cookies as you pass. But wait! Is that really fresh-baked cookies that you smell? No, it isn't. Disney's smell specialists have crafted a “fresh-baked chocolate cookie” smell that is piped through a vent directly over the door to the bakery.

Why do they do this? Are they using nefarious means to try to get you to buy their cookies? Well, yes, to some extent. But also, think about the visually-impaired (or, as my friend's blind brother refers to them, “people who don't see so good”). If they're walking down Main Street, shouldn't they get the joy of experiencing walking past a bakery, too? How do they know they're walking past the bakery? They can smell it.

OK, you say, why don't they just use fans to blow the smell of the cooling cookies out the door? Well, actually, they tried that. However, they discovered that blowing air across the cookies would crack the cookies. Also, they're not baking all day long. Rather than make it a hit-or-miss proposition, in order for everyone to experience the wonderful chocolate chip cookie smell at all times, they need to do it artificially. By the way, the machine that generates the smell is called—you guessed it—a smellitizer. 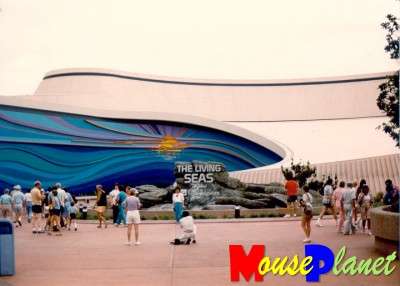 The hydrolators at the Living Seas take you up and down—at least a little. MousePlanet photo by Mark Goldhaber.

Now, let's go over the Living Seas pavilion over at Epcot. Now that the sea cabs are no longer running, you need to take the hydrolators both down and up when traveling down to Sea Base Alpha. Those deep elevators must take you down a bit, a least a couple of floors, right? Nope. The hydrolators actually only move about an inch or so, mostly during the initial jolt. The rest is done using a shaking floor, growing or shrinking lights in the ceiling, and the motion of the corrugated surface and the bubbles behind the glass.

How about the Haunted Mansion? You must go down quite a bit in the stretching room. Actually, in California's Disneyland, you do. The stretching room at Disneyland's Haunted Mansion takes you down below ground level to the loading area of the attraction. The first length of track takes you out beyond the Disneyland Railroad tracks, to the main Mansion show building, where you again go above ground level, until you go back down to pass under the tracks again for your exit.

At Walt Disney World, however, the ceiling goes up. The Mansion is not located next to the tracks, so there's no need to go down to get past them. Besides, if you went down, you'd be taking away valuable space from the Utilidors.

The Utilidors? What's that? Are they underground? 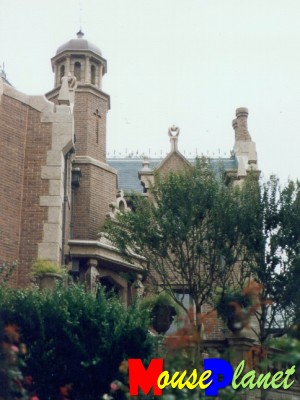 Going up, or down? The Haunted Mansion at Walt Disney World does the opposite of the one at Disneyland. MousePlanet photo by Mark Goldhaber.

Well, after Walt Disney built Disneyland, he learned from his mistakes. When seeing a cowboy walking through Tomorrowland because there was no other way to get to his work location in Frontierland, Walt decided that there needed to be an easy way to get from one part of the park to another while remaining off-stage.

When the Magic Kingdom was being designed, a subterranean network of tunnels and offices was created for all sorts of services (such as costuming, hair, maintenance, kitchens, and locker rooms), as well as for off-stage travel. However, the water table in Florida is extremely high (just below ground level, in fact).

How were they to build an underground city under the park when the water would fill it up immediately? The design team came up with an ingenious plan: They needed to dredge the Seven Seas Lagoon to make it passable for the ferries and other watercraft that would ply its waters. They built the Utilidor complex at ground level, and used the fill dredged from the lagoon to build up the ground over the Utilidors and grade the approaches gradually so that people wouldn't realize that they were actually entering the park on the second floor.

They ended up being even more fortunate than they expected, finding beautiful white sand underneath the muck of the lagoon—enough to cover the beaches of the Polynesian and, later, the Grand Floridian with a beautiful, thick layer of white sand. In addition, by raising the park up to the second floor, it becomes even more visible and impressive when viewed from across the lagoon.

Well, we've reached the end of the column, and—whaddaya know? I've got more stuff to tell you! Let's pick this up again next time. See you then!

Bonus Factoid of the Week

As a follow-up to my story on hidden tributes in the parks, a reader contributes the newest tributes at Epcot. At Mission: Space, at the bottom of the plexiglass panel showing details of the X-2 in the queue, the three-letter sequences are the first initial and first two letters of the last name of many of those who made significant contributions to the attraction.