In this multi-part series, former Imagineer George McGinnis shares his memories of the beloved Horizons attraction in Epcot.

Horizons Pavilion presented by General Electric was sometimes referred to as the story that should have been told inside the Spaceship Earth geodesic sphere, Epcot's entrance icon at Walt Disney World. The Horizons attraction, an optimistic view of the future covering all of the Epcot themes, certainly would have filled the bill. It was enjoyed by all and is dearly missed as evidenced by the Internet chatter that continues to this day.

A typical letter was this one posted at the time of Horizon's closing: “Horizons has always been my favorite ride at Epcot. I'm very upset that they closed it. Don't get me wrong, I like when new rides open, but I hate when they close rides I really love.” 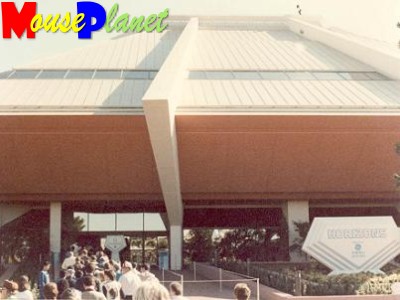 The pyramid-like Horizons building welcomed guests from 1982 through 1999. Photo by Mark Goldhaber.

This sad letter expresses succinctly what Disney executives know so well: Some show experiences will have to live in our memories as do most movies. The new show must come on. Disney has been successful at creating shows that a person can enjoy over and over again. General Electric's Carousel of Progress is the one I would choose as an example.

The Carousel show figured prominently in the development of the Horizons story. This new Epcot attraction would pick up that same story a generation later with the same optimism, but this time with “dreaming” as the message, “If We Can Dream It We Can Do it,” rather than “Progress.”

While the history of the pavilion's development is stated as beginning in 1980, there was a first attempt at a concept in 1979. With Collin Campbell, a Walt Disney Imagineering artist, I worked on an idea of presenting Edison's Laboratory as the entry point in the General Electric story. This idea didn't impress GE's Chairman, Reginald Jones. He didn't want another history show, which the Carousel of Progress basically was. He suggested we tell a story of the promise of current technologies. 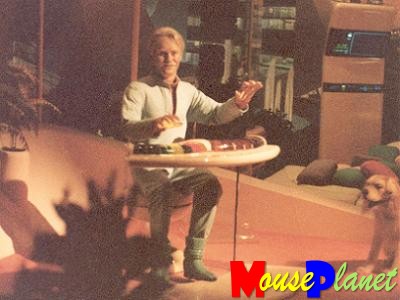 Horizons brought the family from the Carousel of Progress into the future. Here, the Carousel's father has become the grandfather. And the dog is still around, too. Photo by Mark Goldhaber.

General Electric, as a conglomerate, had a full range of businesses that would be best showcased in a “hands-on” post-show area after the ride. The late Marc Nowadnick, a WDI writer, presented a post-show concept and called it “FutureFair.” It was presented to Jack Welch, at the time the heir apparent to the Chairman Jones. Jack saw it as a commercial, which he did not want, so it was omitted.

Exit polls after opening day indicated the guests very much enjoyed Horizons, but were not making the connection between Horizons and GE that the FutureFair would have provided. The obvious first solution was to add GE logos on technical set pieces throughout the show's Future scenes. Later, artist Bob McCall's exit mural was removed and replaced with a lighted corridor leading to a large static electricity light bulb displaying the GE logo. This improved guest awareness of GE's sponsorship. 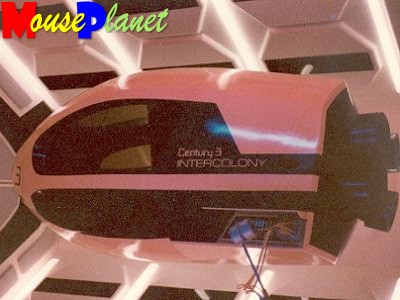 The pavilion's original working title of “Century 3” survived on the side of this intercolony space transporter. Photo by Mark Goldhaber.

EPCOT opened in 1982 and Horizons Pavilion was scheduled to open the next year. This one pavilion now had the use of the WDI's best artists, writers and designers who had created EPCOT. General Electric's representatives on the team had experience working with Disney on past shows. Early on, working names for the pavilion were Century III and FutureProbe. Of the latter, Ned Landon, GE representative on the Horizons Imagineering creative team, said “Not bad. But we always thought it had a rather uncomfortable medical connotation.” Ned was comfortable with the name Horizons. Quoting Ned, “There always is a horizon out there. If you try hard enough, you can get to where it is—and when you do, you find there's still another horizon to challenge you, and another beyond that.”

The Horizons show would pick up the story from the Carousel of Progress by presenting that show's memorable family one generation older. The parents are now grandparents communicating with their kids spread the world over and into space. The story sequenced through past, present and future. The “past” was presented as “Looking Back at the Future” as science fiction writers had portrayed it. The “present,” viewed on giant Omnimax screens used current science images from the space shuttle lifting off to views of molecular structures and DNA, by filmmaker Eddy Garrick. The “future” would let us visit the family members in habitats and environments that are still a dream in scientists' minds. The father and mother keep in touch with their children in these distant places via holographic devices. 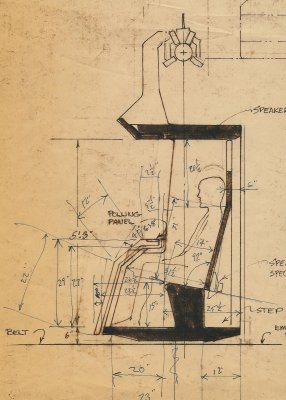 George McGinnis' proposal sketch for the new version of the Omnimover vehicle with dimensions added for the mockup construction. The Omnimover in Horizons was the only Omnimover ride at Walt Disney World to feature guests always seated sideways to the motion of the vehicle. Click on the image for a larger version. Image courtesy of George McGinnis.

I had the pleasure of joining Ned Landon when he gave Jack Welch, by then the new GE Chairman, a walking tour of the nearly completed pavilion. Jack immediately recognized the father and mother when we reached the Future scenes. He wanted to know why we were using the characters from the old Carousel Theater. Ned explained the Future story's premise and from then on the warmth of the story became evident to Jack.

The late Claude Coates, one of the original WED/WDI Art Directors was Show Designer directing the initial concept (a most prolific designer, Claude got the first licks in on most of the EPCOT pavilions). Claude worked with Industrial Designer Bob Kurzweil and Architect Bill Norton on the first ride layout. Collin Campbell developed the wonderful early scenes with Albert Robida's vision of the future on to the Art Deco home with robots vacuuming, cutting hair and cooking.

(Though Horizons is no more, there are several sites on the Internet where these scenes can be viewed. “EDC Gateway Horizons” (link) has the script with photos of scenes.)

Viewing all this from the vehicle required a version of the Omnimover to very effectively put you into the scenes. I recall that Gil Keppler and I built the full-size mockup for testing in just 13 hours. (John Horney, WDI artist, skilled at caricatures, sketched Claude, Marty, the late John Hench and me in the mock-up vehicle. He gave us all a good laugh.) Guests may have wondered where they would go if the ride stopped, especially when hanging out in space. If an evacuation was called for, which seldom happened, a door would pop open behind the guests and an operator would guide them to an exit.

The Largest Special Effect Ever 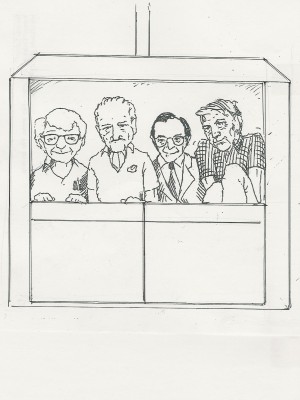 The 90-foot Omnimax theater had to be positioned before the building design could be completed. Architect George Rester formed the “space ship” building and the ride layout conformed to Rester's pavilion outlines from then on. The huge Omnimax theater was beneath the center of the pyramidal form. Early on, Marty Sklar had stopped me in the hall and asked me to see if an IMAX theater could be adapted to the ride. In the past I had been playing with the idea of an Omnimax simulator experience that wasn't going anywhere.

Here was my opportunity to use it; I laid out a three-screen arrangement that allowed vehicles to have a continuous show through two circuits around a triangular core, housing three projection rooms. I was able to hide the load/unload at the base of this tower. In my mind the Omnimax theater would be the big ending experience, but the writer's story used it instead to tell the “Present” with all the amazing advances in science.

Marty then asked me to come up with a “weenie” (a Walt term for something that draws your attention) for the ending. I developed the traveling screen concept, which allowed four guests to “Choose Their Future” by voting on touch panels. The choices were video simulations of travel through environments we had visited: Desert, Undersea and Space, ending up back at the FuturePort where our journey began. Engineer Marty Kindel began working out the complicated logistics that would enable each car to see a different environment. 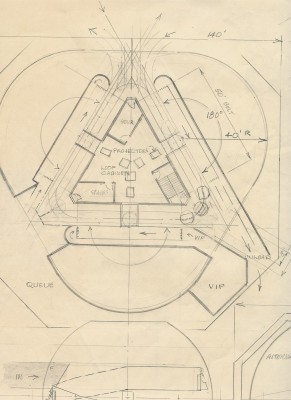 This sketch shows George McGinnis' original concept for three Omnimax screens, which was later cut to two in order to meet the attraction's budget. Click on the image for a larger version. Image courtesy of George McGinnis.

Part 2: Trimming the Cost and Managing the Design Team