In this multi-part series, former Imagineer George McGinnis shares his memories of the beloved Horizons attraction in Epcot. To start from the beginning, see Part 1 (link).

I would like to offer a bit more information on the “traveling screen concept” mentioned in Part 1. Correctly named, it would be “traveling image concept.” At the time there was talk in technical journals of using the technology to project images on subway tunnel walls. They would travel with the trains and be used for advertisements.

I suggested it for an element in the Horizons post show. It was to be a “tunnel” of moving images that the guest viewed while standing on a moving belt. GE's businesses would be highlighted. It was a short experience but had good capacity—ideal for a post-show experience. Its weakness, as I had conceived it, was that there was no sequential story, much as in the Omnimax theater. As I wrote in Part 1, the post show was eliminated and the show ideas with it.

So when asked by Marty Sklar to come up with an ending after the Omnimax experience was moved to mid-story, I suggested this idea to the team. The first thought was to use it for polling, but a GE team member said, “I could get all the information I need from just 1,000 guests leaving the pavilion.” It then evolved into the guest voting for a choice of simulation experiences.

This sketch shows George McGinnis' concept for the “choose your own ending” finale for Horizons. Click on the image for a larger version. Image courtesy of George McGinnis.

The other technology making this possible was GE's Talaria Light Valve projectors, which could project images onto screens 12 feet and larger in great detail. The close viewing position of the vehicle called for this. The GE team was concerned about the “visual intrusion” of the adjacent vehicle's screens, so “shields” were added to separate them.

There were difficulties with controlling color balance across the image that weren't apparent in tests. For all but an instant the image was coming from two projectors, so a “warm edge” would show against a “cool edge.” Overall the technique worked well and guests enjoyed it.

As I mentioned in the article WDI Engineer Marty Kindel worked out the complicated logistics that would enable each car to see a different environment. There were many other disciplines involved in its creation, but I credit him with the concept's survival.

It's an example of how the creative team works, one person suggests an idea and before it gets thrown out, another team member sees something more in it. Without the fear of being told “it will never work” or other discouraging words, great things happen.

There were two periods in scene design when I was asked to redesign to meet the budget. In Scene Five, which was a view of the 1950s, we had planned to continue the use of animatronic figures, such as a little girl with a hula hoop. We changed to wire sculpture figures and flats illuminated to look like neon with black light. This would have achieved the goal had not the design evolved.

John Hench noted that we were not using the tremendous height of the available space. He asked me to put in a tower restaurant—think Seattle's Space Needle. The flavor was the Jetsons with flying cars and fun signage from the period. Everyone liked John's tower, a great center of interest, but it did nothing to help the budget. It stayed.

This sectional view sketch shows George McGinnis' original “two circuit” concept. The ride vehicles are shown above and below the projection lens in the Horizons attraction. Click on the image for a larger version. Image courtesy of George McGinnis.

The other cutback was at a point when the show was nearly all on paper. We were asked to take out $10,000,000. I knew where some costs were—the three Omnimax theaters, some inefficiencies in track layout, and spacious preshow and post show areas. I took out one Omnimax theater allowing for one 90-second circuit to climb to the second floor, shrunk the front pre/post show areas by half, and removed a whole bay by double-siding the Floating Cities, Undersea Classroom and Restaurant scenes. In the revisions, the track length was reduced by a total of 600 feet. The “Fifties” scene replaced a “Looking Back at the Future” spiral montage.

The largest single reduction in Horizons' track length was in the Omnimax theater revision. In Claude Coates' concept, the vehicles rose along a spiral track to enter the Omnimax theater at the top level. Along the spiral turns, a montage of Amazing Stories covers and other “Back to the Future” art was projected (Collin Campbell and I had researched this material at Redlands University Science Fiction Library for the early scenes).

Entering at the top and after two downward circuits, viewing Omnimax scenes, the ride exited at the bottom. The vehicle then climbed to the second floor Future scenes. The revision did it all in a single upward pass through Omnimax. The deleted spiral track left a tall space for the Fifties scene, where John Hench saw the possibility of the Tower Restaurant addition.

Chase Young, architect with the firm producing Horizons construction drawings, complimented us on the simplicity we brought to the layout, but told us only one of his drawing sheets survived the cut. I never heard whether we achieved the desired reduction in cost, but usually, it was when you didn't that you heard. 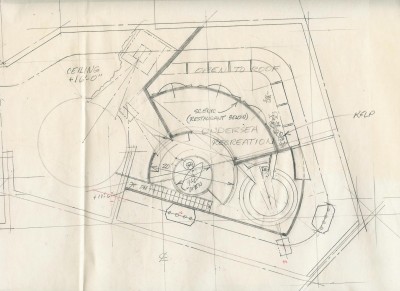 This layout shows how George McGinnis double-sided the scenes in Sea Castle. Combining two “bays” into one reduced the track length without losing any show elements. The curve of the floating city scenic backdrop matches the curve of the wall of the Undersea Restaurant below. Click on the image for a larger version. Image courtesy of George McGinnis.