In this multi-part series, former Imagineer George McGinnis shares his memories of the beloved Horizons attraction in Epcot. To start from the beginning, see Part 1 (link), and continue with Part 2 (link).

Marty Sklar set up an Industrial Design Department in July 1980 and asked me to manage it. This was preparation for the coming surge of work on the various Epcot pavilions and their companion exhibits in Communicore. Several recent graduates of the Art Center College of Design (in Pasadena, California) were sent to my office to show their portfolios. I made recommendations and several were hired.

There was to be quite a learning curve for me, for now I was to be giving assignments and directing design, rather than just designing. My approach to designing at Walt Disney Imagineering (WDI) is evident in a 1966 letter to my father, describing 1967 Tomorrowland projects: “My work is interesting in that I have several jobs going at once, and all rush.” This was my style, and I loved it.

I had developed the technique of working back and forth between two-dimensional layout and simple foam core models. These small scale models not only aided and accelerated design, but also effectively presented concepts to management. Not everyone is able to visualize from orthographic drawings. This had worked well on projects such as the Space Mountains. During a very rushed period on the Horizons project, I would build the small-scale models at home in the evening so I could meet the schedule of the Dimensional Design Department (formerly the Model Shop).

I encouraged the new department's designers to try this method. They were certainly able to, for model construction was part of their Art Center training. These small models were intended to define space with limited detail. After the concept's acceptance the department's Industrial Designers detailed the scene, their drawings were then given to Dimensional Design for building large scale walk-through models. Their purpose was to provide eye level views of the finely detailed scenes (Horizons scenes were all one-sided, unlike shows such as Pirates of the Caribbean).

Sometimes the walk-through models were rushed with preliminary sketch information. This was a cause for negotiation regarding final details, when the full-size sets were constructed. Schedule being all-important in production, management sometimes had to choose. Gil's kitchen design was a case in point; it survived as he designed it. 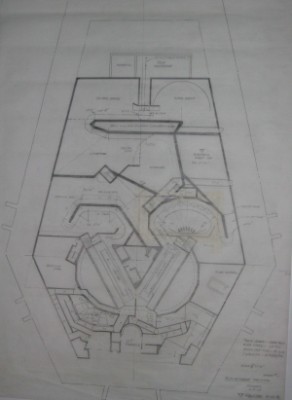 A great deal of this April 1981 concept plan for the first floor of Horizons (then under the working name FutureProbe) was done with many people walking past George's closed office door during an open house at Imagineering. Click on the image for a larger version. Image courtesy of George McGinnis.

Models of this quality have been used at WDI from the early days as an aid for show sponsors, full-size set builders, and park construction crews to better visualize the finished product. Walt Disney used an upside down periscope device to view his models of Disneyland in true perspective to check how they would look on opening day.

The Industrial Design Department members were assigned to projects throughout Epcot's FutureWorld. The group put out an immense amount of work over the next three years. Having been hired after graduating from the Art Center, they never slowed down. They were used to putting in long hours. The period of the department's existence was indeed a wonderful experience, especially in group camaraderie. After all the EPCOT pavilions were open, the department was dissolved. Some of the group were picked up by project teams and others were let go. A fact of life, but a new experience for me to tell a person—this is it.

There were also summer interns from time to time, both male and female.

A New Way of Working 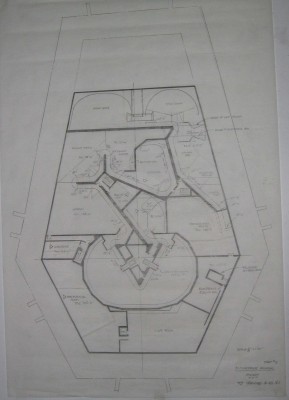 This April 1981 concept plan for the second floor of Horizons (also largely done during that Imagineering Open House) shows the Omnimax theaters above the load/unload area. Click on the image for a larger version. Image courtesy of George McGinnis.

As department manager, I found I actually enjoyed my work more, for I could concentrate on scene layout, including forced perspectives, sight lines, and special effects layout, such as the Pepper's Ghost effect. An early concept model I created for the preshow queue was of the three kaleidoscopic windows. These created huge spherical illusions by reflecting Bob McCall's inspirational Horizons concept paintings of Nova Cite, Mesa Verde and Omega Centauri. After concept acceptance, Gil Keppler designed and detailed the preshow space. He placed faux sliding doors to “nowhere” for show in places.

Near the time of Horizons opening, Dick Nunis, the President of Walt Disney World, asked me to join him in a review of the pavilion. Dick had an assistant with him. As we walked the queue, Dick was spotting locations for trash cans, and put one directly in front of one of Gil's faux stainless steel doors. I've read readers' letters to the Horizons Tribute discussion list (link) commenting on this. Did Disney want to prevent guests from looking behind the doors? What was Disney hiding? Dick and I hopped on the ride. When we reached the Omnimax theater he was impressed, but something was missing. He wanted it to have simulator movement, to enhance the scenes. Too late; he would have to wait 'til Soarin' at Disney's California Adventure for the experience he wanted.

Part 4: The Story of Horizons.