In this multi-part series, former Imagineer George McGinnis shares his memories of the beloved Horizons attraction in Epcot. To start from the beginning, see Part 1 (link), and continue with Part 2 (link) and Part 3 (link).

Tom Fitzgerald was the main story person as the Horizons project got rolling. (In July 2001, Tom was appointed Executive Vice President, Senior Creative Executive, WDI.) Tom added the warmth of story to scenes I was designing and modeling in small scale. I had modeled the nose of the space shuttle in the dock. Tom sat down and said, “Let's show a family arriving at Omega Centauri and have their little boy floating weightless, having taken off his magnetic shoes and the father trying to rescue the floating luggage, a teddy bear, the boy's shoes.” I guess the boy could float for a while for he was certainly enjoying it.

My, that boy looks familiar—it's my son Reed! 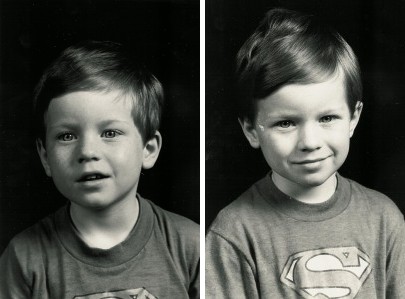 Reed McGinnis served as the model for Timmy, the boy floating away from his family at Omega Centauri's arrival area, while Scott McGinnis posed for the scuba diving scene under the restaurant in addition to the Classroom/Seal scene. Photos by George McGinnis. 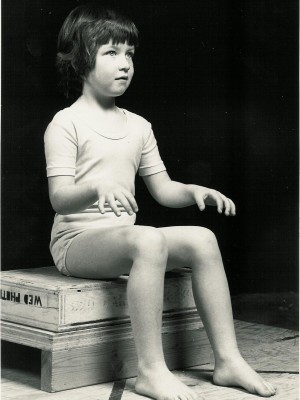 Shana McGinnis is shown posing for the model for the little blond girl tapping her toes at the undersea diving class. Photo by George McGinnis.

Tom had asked me if my three children Shana (then 7), Reed (5) and Scott (5) would like to pose for photos and be sculpted as audio-animatronic figures for three scenes. Of course, there wouldn't be another opportunity like this until one of them becomes our President!

Shana is the little blond toe-tapper in the Undersea Classroom. Scott is there with the seal attempting to lick his face. Scott's nose is turned up in a comic expression. He also is swimming with the scuba divers in a later scene. Reed's figure is the closest to a likeness, the three sculptors having different approaches. Our family was there opening day. I'm sure Shana, Reed and Scott felt honored to be a part of this truly unique show.

The Sonoran Desert scene with robotic harvesters, a triangular arrangement of helium blimps, lifting baskets of crops, had a long viewing period for a forced perspective. It was only correct at the middle of the scene. Claude Coates had developed the scene concept. Think back at the wonderful scenes he created in “If You had Wings.” No one did it better.

Gil Keppler and I detailed the desert farming scene. The harvesters' unusual form never looked out of perspective. Gil's control room with the daughter talking with her mother as she directs the harvesters is round in form, a foreground element that always looks in perspective. As you pass the scenes mid-point, the little hovercraft sitting on its pad distracts the guest from noticing the degrading perspective. What fun being charged with designing these complex scenes.

Gil designed and detailed the kitchen beautifully with its glass floor, smart circular cabinets and partial views through to the desert scenic. General Electric of course advised us on the various products. There is supposed to be a nebulizer there, but I can't tell. Gil, help? We then pass the young girl talking to her boy friend (Tom Fitzgerald) at the floating city or “Sea Castle.” The scenes from here on are double sided as I mentioned earlier. 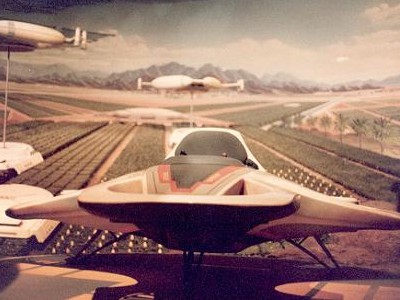 The daughter's personal hovercraft sits ready on its pad for the quick commute home after a day of harvesting. This foreground element attracts your attention away from the forced perspective which has begun to degrade at this point. Photo by Mark Goldhaber.

The undersea classroom children are learning the safety rules of diving. The seal barks in agreement. A mini-sub is being launched into the lowest opening. We descend further to the restaurant and see diners enjoying the undersea environment through the bubble-shaped windows. The late Tom Sherman detailed this set and he was highly qualified. His favorite movie set piece was the “20,000 Thousand Leagues Under the Sea” submarine that the late Harper Goff designed for the Disney movie of the same name. He had remade his apartment into Captain Nemo's Grand Salon.

Undersea mining and scuba divers are straight ahead. There is a missing segue as we merge into space. I had designed the mini-sub and the little space rransporter docked in the first Space Station portal to have the same basic shape. This was to facilitate a video projection of Tom's mini-sub morphing into a space transporter as we rounded the curve from undersea to space. The projection device Special Effects Engineering developed had a severe problem with the “shakes”; evidently a fatal design flaw. The morphing effect was eliminated. 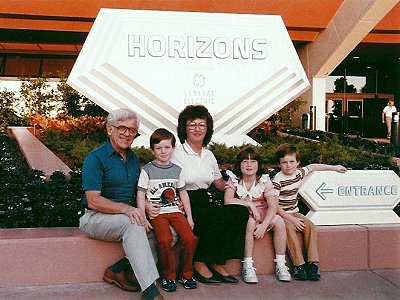 The McGinnis family (from left, George, Reed, Marilyn, Shana, and Scott at the opening of Horizons. Photo courtesy of George McGinnis.

After viewing the giant rotating space station projection we enter the portal, where the mini-space transporter has just docked. We then enter the center column of the colony and see Shim Yokoyama's painting of the habitats, sports stadiums and parks on the revolving curved landscape in the “distance.”

We continue to the space shuttle dock with arriving family and on to the Science Lab with the huge crystal supposedly grown in space. It was huge and the size was questioned by the team. Artistic license saved the scene. After all, the message was “If We Can Dream It...”

The birthday party scene, squeezed into a narrow corridor, presented difficulties in the layout of the holographic illusions. It was the last before we vote on how to return to the FuturePort. The boy and his parents on Omega Centauri are joined by the grandparents, siblings and friends on three holographic screens and they all sing, “Happy Birthday to You” from their respective habitats—Nova Cite, Mesa Verde, Sea Castle, and Omega Centauri.

I learned from Tom that the song “Happy Birthday to You” was owned by Sunny-Birchard Music Company, and Disney paid a royalty for its use. 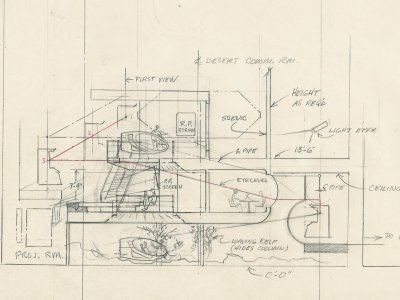 This elevation sketch shows George McGinnis' design for placing scenes from Mesa Verde and Sea Castle back-to-back within the Horizons building. Red lines show the sight lines for guests on the attraction. Click on the image for a larger version. Image courtesy of George McGinnis.

After traveling the “Countdown” corridor, guests are invited to make a choice on how they would like to travel back to FuturePort. Three touchpads in the vehicle light up and you have three choices for your return: A hovercraft to Mesa Verde, a mini-sub ride to Sea Castle, or a mini space transporter to Omega Centauri.

The destination is determined by the majority's choice in each vehicle. Baffles swing into place to hide the next vehicles screen and with a rumble from the transducers in your seat, you tilt back and “accelerate” through a 30-second simulation speeding you to your final destination, FuturePort.

General Electric welcomes you back with a glittering fiber optic display before you step out of your vehicle.

My Walt Disney Imagineering projects have ranged from designing a mailbox for Tomorrowland to developing new show concepts. There is never a shortage of ideas and as Marc Davis once told me, “a good idea doesn't die—it will come around again.” In the years since Michael Eisner came on board, WDI expanded greatly. Many projects were under development at any given time, but the selection process eliminated many. A Jules Verne Time Machine show I was developing with Tony Baxter and Tom Fitzgerald for the Carousel Theater was praised highly, but its demise was credited to the public's lack of interest in realistic audio-animatronics shows. 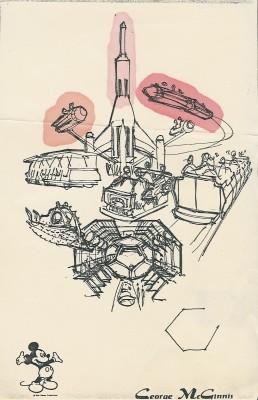 George doodled this montage of some of his projects after his first decade with Disney. Click on the image for a larger version. Image courtesy of George McGinnis.

What was my favorite project over the years? Probably one of the Space Mountains. The Space Port in Disneyland's Space Mountain was a particularly satisfying concept I developed in concept-model form. But, for the sheer numbers of talented people I interacted with, Horizons was a major one.

The General Electric representatives on the team were a wonderful bunch of guys. They knew Disney quality well and had worked with WED/WDI people from the World's Fair years on.

Horizons has been replaced by Mission: Space, a truly remarkable achievement in space travel simulation and information. May its message add to Horizons' “If We Can Dream It—We Can Do It.”