History of the World, Part VI

Last time, we discussed the public works projects at the Walt Disney World site, which were overseen by General Joe Potter. All private works project—the hotels and theme parks—were overseen by Admiral Joe Fowler, the man who oversaw construction of Disneyland a decade and a half earlier.

Phase One of the Walt Disney World project was to consist of the Magic Kingdom theme park, five resort hotels, an entrance complex, golf courses, and daytime resort activities. The five hotels in the original plan were to be:

By the time that the Tenth Preliminary Master Plot Plan was committed to paper, the latter three hotels had been relegated to “future development” (and later dropped entirely). 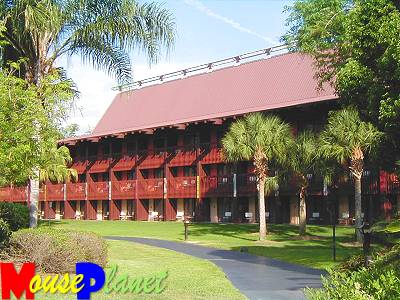 The Tokulau longhouse building at the Polynesian Resort, one of the original hotels that made it to fruition at the Walt Disney World resort. MousePlanet file photo by Brian Bennett.

The hotels that never were

So whatever happened to the three hotels that disappeared from the plan? Where were they supposed to be? Would they have caused anything else to change? What would they have looked like?

The hotels would have all been located on the monorail loop. However, aside from the five hotels on the resort line making the local loop take much longer, the location of the Persian Resort would have changed the route of the monorail. Most of the monorail route would have been similar to its current route, with the Venetian requiring a stop between the Contemporary and the TTC, while the Asian would have had a stop at approximately the same location as the Grand Floridian's current station.

The big change would have come from the Persian Resort. Instead of the line curving from the Contemporary to the station located at the front of the Magic Kingdom, it would have continued north to the Persian Resort, then curved around (joining with the roundhouse spur) and proceeding through the park to a station in Tomorrowland. Following that stop, the monorail would continue to a stop in front of the Magic Kingdom, and then on to the Asian.

After the resorts were pushed to a later phase, when the monorail route was already in place and Tomorrowland designed without a station or footers for a monorail beam, the intended route was changed and the Persian would be on a separate monorail line that would just go back and forth between the resort and the station at the main entrance.

As far as their appearance, there are very few sketches floating out there. The great Widen Your World site has a full page about the Asian Resort (link). Brian Martsolf's Walt Disney World in Postcards site has images of all three proposed resort designs, as well as a map indicating their locations (link).

The Contemporary and Polynesian Village Resorts would be built using modular construction, a new technique championed by U.S. Steel. The framework of the hotels would be built on-site, but the hotel rooms would be built, fitted out and furnished at a plant three miles away. This would speed construction by allowing the two tasks to proceed simultaneously. 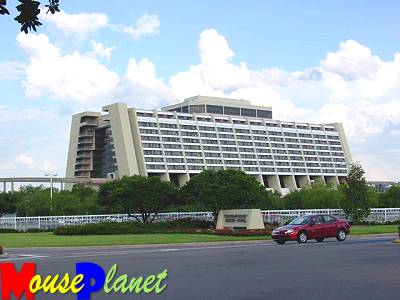 The Contemporary Resort as it appears today. MousePlanet file photo by Sue Holland.

The installation went well, with the nine-ton rooms being built and outfitted with wall coverings, carpeting, mirrors, lighting fixtures, built-in furniture and bathrooms at a rate of about a dozen or so per day, then trucked over to the hotel sites and lifted into place by a crane, sliding in like a set of dresser drawers. However, the plans for swapping rooms in and out were later discarded, as nobody had foreseen that the settling of the ground and, indeed, the buildings themselves, would make it quite impossible for the rooms to ever slide out again.

U.S. Steel had leased the land under the hotels and would own the hotels themselves, while Disney would operate them. Roy O. Disney, who was now overseeing the whole project following his brother Walt's death, informed Donn Tatum (then president and vice chairman of the board of Walt Disney Productions) and Mike Bagnall (from the company treasurer's office, later Chief Financial Officer) that he wanted to buy out U.S. Steel. Tatum, who had conducted the earlier negotiation with U.S. Steel, was not happy about going back to the bargaining table.

Dick Nunis, who was heading up the operational aspect of the park, complained to Roy that the money would be better spent on more capacity for the park. Roy responded, “I'm doing you a favor. We're not going to be very good partners with them.” And so Disney gained control of their hotels, much in a similar fashion to the way that they bought out the leassees at Disneyland over a decade earlier.

A new line of business

So now Disney was getting into the hotel business. (The Disneyland Hotel was actually owned and operated by the Wrather Corporation until Disney bought it in 1987.) Some Disney staffers would actually get an introduction to the art of facilities management at Celebrity Sports Center, a family recreation center in Denver co-owned by Walt Disney, Art Linkletter, and several other celebrities. But while the managers learned how to run a facility, they knew nothing about hotel management.

Luckily, Dick Milano, at that time the manager of the University of Disneyland, had a degree from a hotel management school. Along with Disneyland U. founder Van Arsdale France, a training programs was created that focused on Disney principles, mixed with ideas from the most progressive and successful hoteliers.

In order to “rehearse” running a hotel, arrangements were made to lease the Hilton Inn South for the Disney trainees to operate, and which would host many Disney staff members and executives traveling to the project site from California. As the Contemporary Resort was nearing completion, Disney hotel staff took over, and several staffers moved into the as-yet-no-air-conditioning rooms.

Luxury hotels were not the only lodgings to open back in the beginning. From the start, Walt's plans had included a campground. The Fort Wilderness Campground also debuted in 1971, providing accommodations for Disney fans that preferred to sleep under the stars.

But lodgings alone would not bring guests to Walt Disney World.

Next time, we'll start looking at the construction of the Magic Kingdom theme park and the various modes of transportation in and around the park and resort.