Where Does It Go?

What if you could collect artwork, furnishings, signs and even ride vehicles that were discarded by Walt Disney World? Even better, what if it was your job?

Welcome to the world of Brian Ramsey. Ramsey is co-owner of MouseSurplus (link), the preferred liquidator for Walt Disney World. MouseSurplus has handled everything from the signage and character costumes to room furnishings and ride vehicles. They even have the front car from the Mark IV Monorail Red sitting in their yard. And it's all for sale. Well, not all. There are a few items that Ramsey won't part with, like the control panel from one of the subs used at the old 20,000 Leagues Under the Sea attraction. 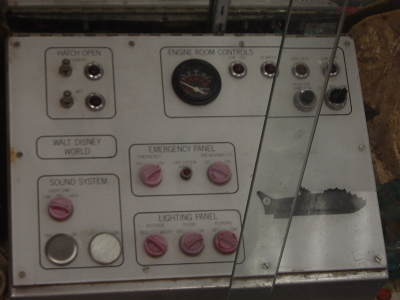 The console from the 20,000 Leagues Under the Sea submarine is not for sale. Photo by Mark Goldhaber.

An Orlando native and lifelong Disney fan, Ramsey was doing promotional work for NASCAR (working with Rusty Wallace's team) in late 1999 when he started doing some work on the side, buying surplus at auction from Disney and reselling it. At the time, Disney was auctioning off their own surplus. He often found himself in competition with Joe West, who was collecting stuff for his Fiasco's Restaurant. In 2002, they decided to stop competing and got together to form Joe's Auction Surplus, which did a great deal of business with Disney. 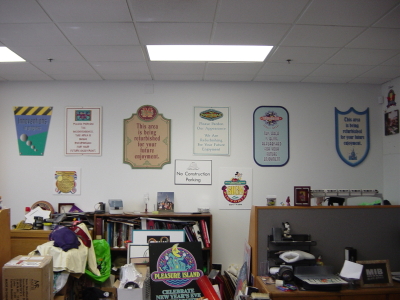 West eventually decided to concentrate on the restaurant business, and Ramsey started MouseSurplus with his business partner, Chip Young. Young, who has been a silent partner for the most part, is in the process of selling his stake in the company. The buyer plans to be a bit more involved in the company. 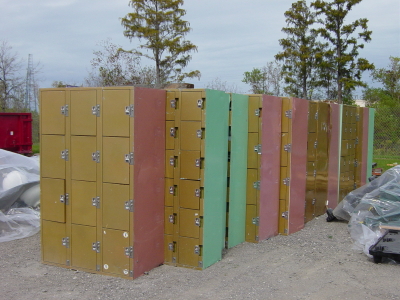 Lockers removed from Main Street Station at the Magic Kingdom sit in the salvage yard. Photo by Mark Goldhaber.

Disney had been looking for buyers for hard-to-sell supplies such as nails and other unglamorous materials. Ramsey got MouseSurplus bonded and insured as a salvage operation in order to be allowed to remove materials, and made a deal with Disney to take whatever they wanted to get rid of in order to get preferred status on the more desirable items. Now, MouseSurplus sells all sorts of stuff that Disney doesn't need or even want any more. 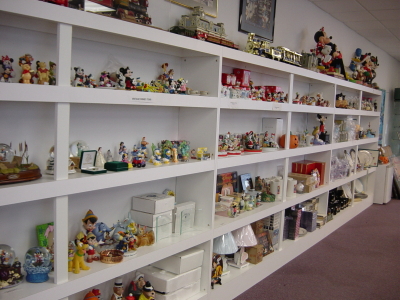 The retail space at MouseSurplus includes a wide variety of small items that are easily carried out. Photo by Mark Goldhaber.

These days, approximately 70 percent of everything that MouseSurplus sells goes through its eBay store. The remainder that stays in the retail shop at the front end of MouseSurplus' location is small stuff, such as figurines, artwork, banners and commemorative medallions. 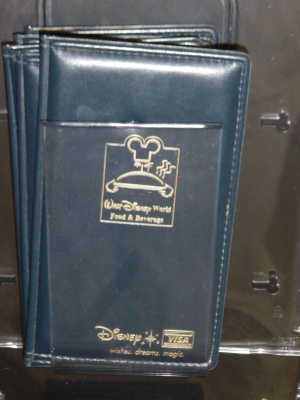 MouseSurplus even sells dining bill folios that are no longer needed. Photo by Mark Goldhaber.

MouseSurplus sells a lot of audio systems to churches and hotels. Churches also often buy LCD projectors, TVs, cameras, and other media equipment. Ramsey says that he wants to take care of the churches, and do other charitable work, feeling that the good deeds that he does will eventually come back to him. Ramsey has even gone so far as to bring the front car from Monorail Red to Michigan for a charity benefit hosted by the Michael T. Schoenith Family Foundation (link) last September. In addition, MouseSurplus recently provided a large amount of blankets and other supplies to FEMA for victims of Hurricane Katrina. 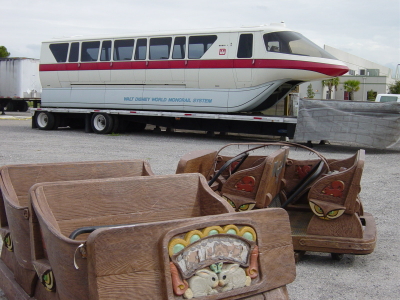 Two ride vehicles from the Snow White attraction sit near the front cab of the Mark IV Monorail Red in the salvage yard. Photo by Mark Goldhaber.

MouseSurplus started off in small quarters in 2004, then moved into its current location in June 2005. They leased the field next to the building to hold some of the larger items, but continued to grow so quickly that they soon ran out of space in their current warehouse. Ramsey is planning to build a new 30,000-40,000 square foot warehouse on the field, and will move the entire operation there from their current leased space. He expects construction to begin this spring, with a move-in date over the summer. 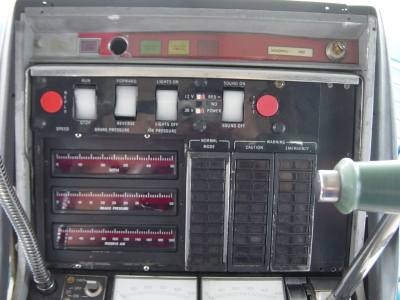 The rate of growth and increase in size and quality of their facilities prompt Ramsey to quip that MouseSurplus "went from Sanford & Son to The Jeffersons." 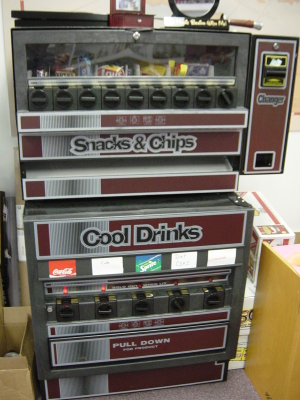 Currently, MouseSurplus has a large amount of inventory of the old furnishings from the rooms at Walt Disney World's Polynesian and Contemporary resorts, which are being entirely redecorated. The materials are not labeled as to which rooms they came from, so unless the room has not yet been refurbished and you can contact MouseSurplus to keep all materials from that particular room together, don't count on your ability to get the complete set of furniture from your favorite room at either resort. 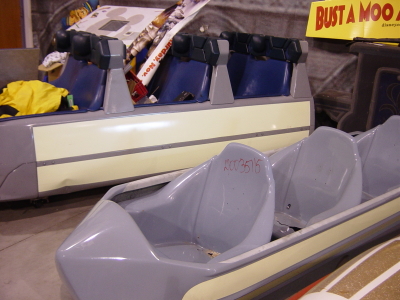 The warehouse at MouseSurplus houses such retired ride vehicles as rockets from the Space Mountain attractions from California (left) and Florida (right). Photo by Mark Goldhaber.

Ramsey reports that the next resorts that he's expecting furnishings from will be the Caribbean Beach Resort and Wilderness Lodge. In the meantime, salvage materials come in on a regular basis. Christmas decorations came in through January and February, and seasonal decor will continue to arrive on a rolling basis. 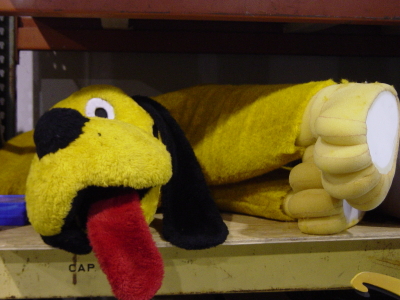 An original Pluto costume from Disney on Ice sits on a shelf in the warehouse. Photo by Mark Goldhaber.

This Saturday, MouseSurplus will be holding a live public auction at their salvage yard, beginning at 10:00 a.m. If you're going, you'll probably want to arrive early to allow time to inspect the merchandise. The event is expected to run until late afternoon. 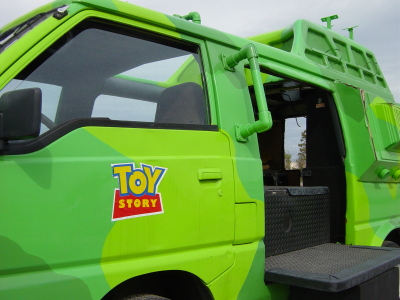 A wide array of Disney items will be up for auction, including furniture from the Contemporary and Fort Wilderness Resorts, golf carts, restaurant equipment and more. Performance artist Trevor Carlton will create a piece of Disney artwork on the spot, which will then also be auctioned off. 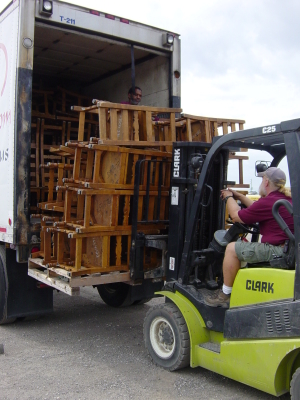 Chairs from Pecos Bill's are unloaded from a delivery truck. Photo by Mark Goldhaber.

For those that can't make it, MouseSurplus has recently gotten a bunch of items from Food Rocks, including the entire animatronic cast, and are putting them up on their eBay store (link). While Fud Rapper and Neil Moussaka were among the lots sold yesterday, lots including Pita Gabriel and all of the Refrigerator Police will close on Saturday and Sunday. More characters still to come are all of the Peach Boys. Another item that arrived at MouseSurplus yesterday is the sign from the old Suspended Animation store. 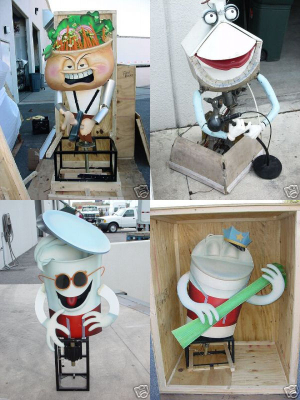 While others (including some Disney celebrities) are spending lots of their money to build their collections from the MouseSurplus warehouse, Ramsey will continue to collect Disney artifacts without having to pay for it out if his own pocket. Of course, that's just until somebody buys them. 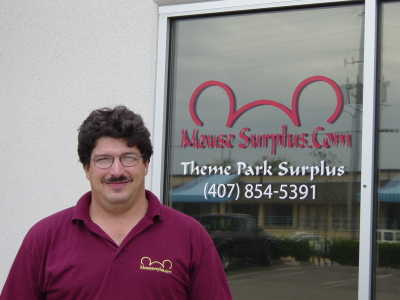 Brian Ramsey is the co-owner of MouseSurplus. Photo by Mark Goldhaber.

MouseSurplus is currently located on Spruce Avenue, just a few minutes' drive from the Orlando International Airport, in the building just past the field containing the front car of Monorail Red. The building has a large sign that says "Kinney Communications."