Last summer, my family and I drove up Route 9 toward Lake George in the Adirondack region of New York, a few miles north of the local Six Flags park, to one of those old-time amusement parks designed for small children, called Magic Forest Park (link). There are small carnival-type rides, some walk-through fairy tale displays, live animals, train and "safari" tram rides through the woods and past various displays of fiberglass people and animals of all shapes and sizes, a small roller coaster, a magic show and even "The Nation's Only Diving Horse" (link). 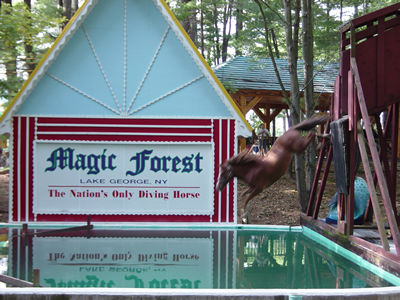 But tucked away in the middle of the park, inside a castle-shaped building, we were amazed to find a nearly 70-year-old relic of Disneyana. Nine display cases illustrate the story of Snow White and the Seven Dwarfs with clothed papier-mâché figures. The cases—about four feet wide, three feet high and two feet deep—contain scenes featuring the figures, which have limited movement, run by a wooden cam-and-rod system from underneath. 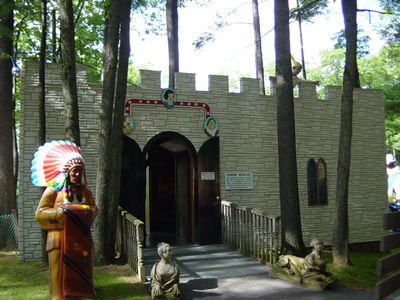 Inside this building lies an old Disney treasure. Photo by Mark Goldhaber.

Wondering about the history of the displays, I spoke last summer with park owner Jack Gillette and again recently. The set was procured by Jack's father, Arthur Gillette, from the Coleman Brothers carnivals back in the early 1960s. How it came into the possession of the Coleman Brothers is lost to history. Arthur had been friends with Bobby Coleman. When the carnival went off the road in the mid-1960s, he bought the displays from the carnival, figuring that they would fit well in the park, which had opened in 1963. 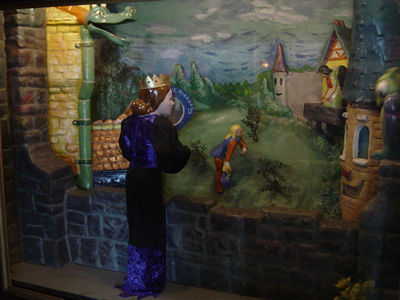 The evil queen looks out from her castle in the first diorama. Photo by Mark Goldhaber.

Once at Magic Forest Park, said Gillette, the displays were originally stored in a barn with other attractions over the winter. When the attractions were removed from the barn and put into place for use over the summer, the display cases were moved into a circle in the barn for viewing by visitors. They were moved around into and out of storage each year. The annual movement, in addition to the exposure to extremes of heat and cold, contributed to some deterioration of the displays. Of the original 10 cases, one that depicts the queen disguised as an old hag offering the poisoned apple to Snow White, was actually destroyed by all of the movement. 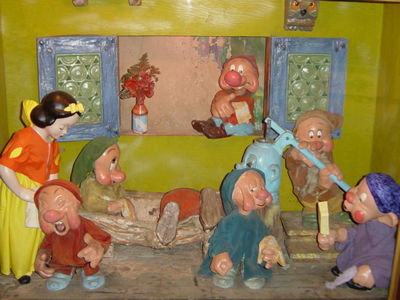 Snow White helps the dwarfs wash up for dinner. Photo by Mark Goldhaber.

The remaining displays are still in remarkable condition. Gillette told me last fall that the scenes themselves have been rebuilt twice, saving as much of the originals as possible. The background paintings have been repainted over the original images as the paint faded, with attempts to match the original colors. 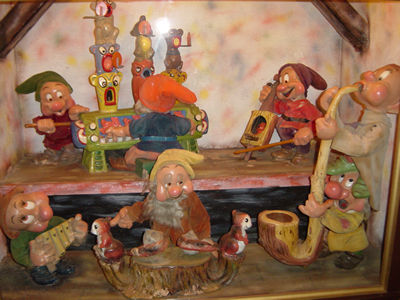 The dwarfs play "A Silly Song" for Snow White. This picture was taken last year, before the scene was refurbished. Photo by Mark Goldhaber.

The figures are still the original papier-mâché, though a great deal of the clothing has been replaced and many of the figures have been repainted. As the clothing on the figures deteriorates over time, it eventually wears through. I spoke with park manager Shelley Cummins, who has been taking figures home over the winter for repainting and clothing replacement for three years now.

This past winter, she repainted and reclothed all characters in the fifth scene, which depicts the dwarfs playing musical instruments. "It would have been nice to leave them the way they were but the clothes and dolls are disintegrating and some were armless, faceless and almost naked," she said. 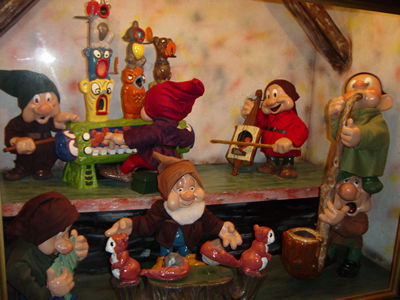 After the refurbishment over the winter, the colors are brighter and the cloth is new. Photo by Mark Goldhaber.

According to Cummins, the figures actually have the color of their clothing written in pencil on their heads underneath their hats. She said that when she repaints the figures, she works around those spots. She has found that the easiest way to replace the costumes is to take clothing patterns for six-month-old children and adapt them for the figures. 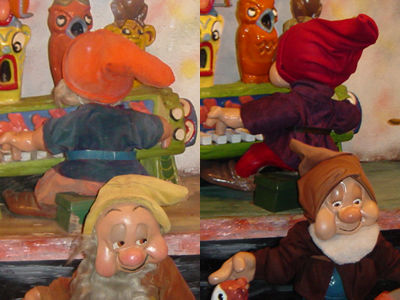 These images show detail of the refurbishment. While it is hard to see from this angle, some of Doc's old clothing near the collar had not faded and was still purple, showing that the new clothing is indeed close to the original color. Also, Doc now has glasses and his face is now painted, where before his face was blank because it was unseen. Photos by Mark Goldhaber.

So far, Cummins has refurbished all of the Snow White figures, one of the witch figures and 15 of the dwarf figures. Interestingly, the unusual color scheme for Snow White's clothing is apparently the original colors. She prefers the true Snow White colors, but used the yellow and orange to replicate the originals. The only change that she intentionally makes has been to lighten the "skin tone" of the dwarfs to make them more natural. As the original paint pigments may have darkened over the years, it is quite possible that the original colors were lighter. 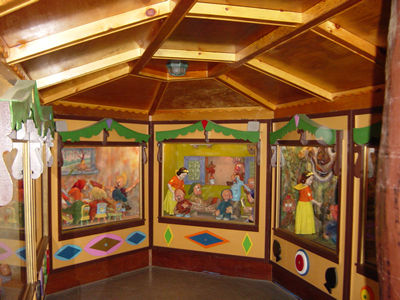 Lovely woodwork frames the displays in their new cases. Photo by Mark Goldhaber.

The original display cases were plain wooden cases with drop fronts. Twelve years ago, they were replaced with new cases with glass fronts that hinge up for access, and they were all placed into a new building built specifically to house them. 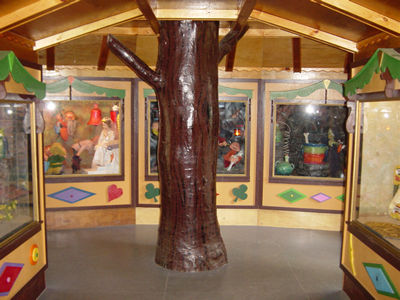 A fake tree grows up through the middle of the display building. Photo by Mark Goldhaber.

The current building is nicely done, and shows off the cases well. A fake tree trunk (purchased for $10 at a liquidation sale for the Danbury Fair 10 years before the new building was built) "grows" up through the middle of the building, providing a nice accent (the floor actually had to be lowered by a few inches to enable the trunk to be installed). Music from the film (not the original voices) plays to set the mood. 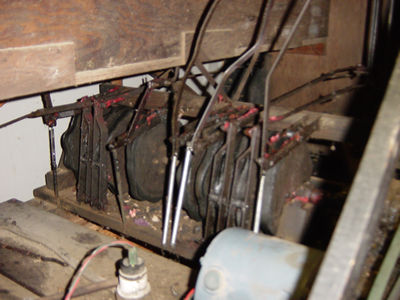 The simple movement of the displays is controlled by old wooden cams and rods. Photo by Warner Stewart.

Eighty-year-old Warner Stewart has been keeping the displays running (along with everything else mechanical in the park) for the last five years. Prior to that, the mechanisms and animation were last refurbished back in the early 1970s.

Stewart offered to let me go behind the cases to get a good look at the workings, but the entryway was too narrow for my wide girth (and I wasn't about to try to go through the overhead accessway), so he volunteered to take a couple of photos of the workings for me. 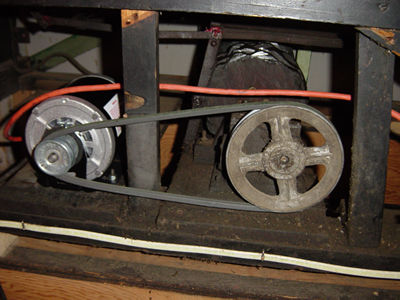 The motors that turn the cams have been replaced with newer models over the years. Photo by Warner Stewart.

The working mechanisms are still run by the original wooden cams, though they're wearing a great deal. When Stewart began working on them, most of the linkages had worn and were slipping. New holes had to be drilled and new bolts installed to take the slippage out of the joints and allow the figures to regain their full range of motion. Many of the wooden cams still need replacing, though, as the wood has worn away from all of the years of use, leaving those scenes with very little motion. 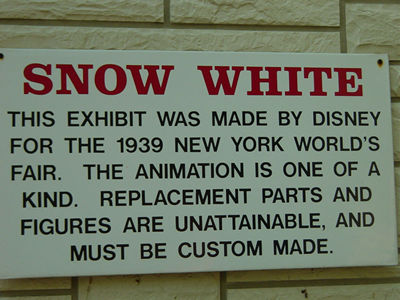 The display is noted as having been created by Disney for the 1939 New York World's Fair. Photo by Mark Goldhaber.

The display has long been marked with a sign saying "Snow White. This exhibit was made by Disney for the 1939 New York World's Fair. The animation is one of a kind. Replacement parts and figures are unattainable, and must be custom made." In researching this story, I consulted with Disney Archivist Dave Smith, with additional assistance from Brian Hoffman at the Disney Archives. It seems that, while the display is not in fact from the World's Fair or made by Disney, it is actually even older than advertised.

It turns out that the set is actually a department store display piece manufactured under license from Disney by the Old King Cole Papier-Mâché Company of Canton, Ohio. The company—perhaps best-known for its papier-mâché figures of Nipper, the RCA dog listening to "His Master's Voice" on an RCA Victrola—was licensed by Disney to create window and interior displays using Disney characters, primarily for department stores, from 1935 to 1942. 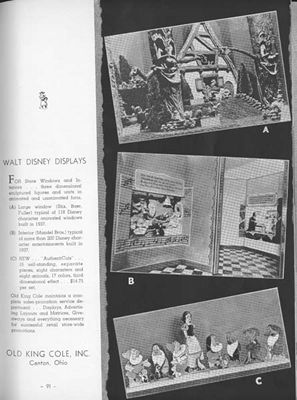 In fact, the display was created for department stores by the Old King Cole papier-mâché Company in 1937. Image courtesy of the Walt Disney Archives.

One of the windows from the display was found by Smith to appear in the 1937 Kay Kamen merchandise catalog, as an example of available product. The caption for the example photo is labeled "Interior (Mandel Bros.) typical of more then 200 Disney character entertainments built in 1937." [Mandel Bros. was a leading department store in Chicago.] The park's exhibit is the only known surviving display set. 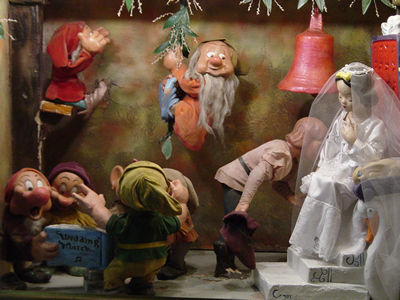 Snow White and her prince get married, as the dwarfs sing "The Wedding March." Snow's new wedding dress was created by Shelley Cummins from a pattern for a costume for six-month-olds. The remaining figures and clothing are the unretouched originals. Photo by Mark Goldhaber.

So the display actually dates back to 1937. The fact that it was a department store display rather than a display for the World's Fair still does not diminish the extraordinary fact that the display still exists and—even more remarkably—is still in good condition. However, Gillette plans to keep those signs attributing the display to the World's Fair to keep the legend alive, as that is how the generations of visitors to the park remember the display. 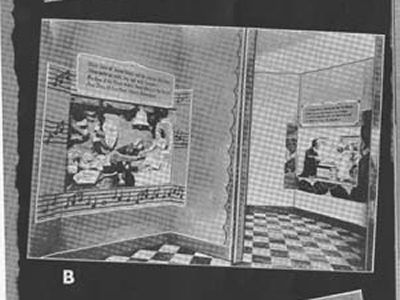 This close-up of the Old King Cole ad shows the wedding scene in the left forefront, with the missing display of the witch offering Snow White the poisoned apple in the background. Image courtesy of the Walt Disney Archives.

It was fascinating to come across this little piece of Disney history hidden away in upstate New York. As Dave Smith agreed, "It is interesting to hear that one of these sets of Snow White displays is still around."

If you have the opportunity to check it out yourself, take the Adirondack Northway (Interstate 87) north from Albany, to exit 20, then take Route 9 north. Magic Forest will be on the east side of Route 9, about 2.5 miles north of exit 20. Coming from the north, it's about three-quarters of a mile south of exit 21. Just look for the 38-foot-tall fiberglass statue of Uncle Sam in the parking lot, reputed by Roadside America (link) as the world's tallest—you can't miss it. 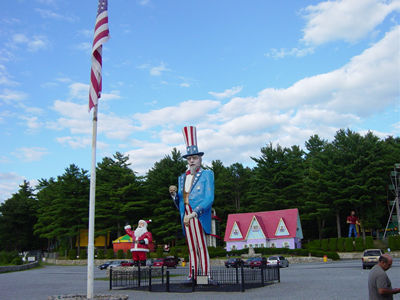