Quest for the Unicorn

From 1993 to 1994, I was the lead designer for the "Quest for the Unicorn" hedge maze in "Beastlie Kingdomme," the fantastic land that almost became a part of Animal Kingdom (link). It's been a few years and I've forgotten most of the script, but I've scoured my memory banks (and old sketches) to assemble a rough description of the walk-through attraction. 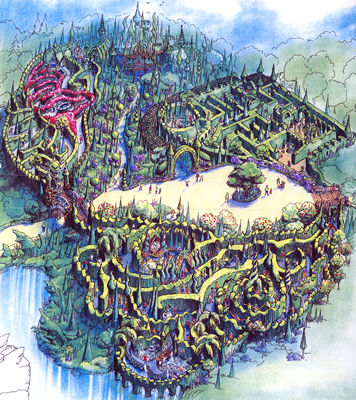 The Quest for the Unicorn was slated for construction in the ill-fated Beastlie Kingdomme at Disney's Animal Kingdom. Concept painting by Maggie Parr (© Walt Disney Imagineering, unauthorized reproduction prohibited). Click on the image for a larger version.

To gather initial inspiration for the design, I researched hedge mazes, gardens, fountains, grottoes, and castles around the world. I also brushed up on myths and legends to build a story that would reflect classical fantasy narratives, and worked with writer Kevin Brown to develop a script. We came up with many characters, but eventually narrowed down the list to meet our budget. Along with the other designers on the Beastlie Kingdomme team, I visited Butchart Gardens in Victoria, British Columbia, Alice's Curious Labyrinth in Disneyland Paris, several French chateaus and gardens (including the beautiful Vaux-le-Vicomte), Leeds and Hever castles in England, and the Chelsea Flower Show in London. Perhaps most importantly, I learned about different species of plants and flowers—a vital aspect of our large and complicated maze. I worked with our landscape designer, Paul Comstock (who could quote the Latin name of any plant on earth), to put together a plan for creating and maintaining the live elements of the attraction.

An overview of the attraction

Overall, the maze had several layers of interlocking stories enfolded into its verdant paths. It involved a quest for a mysterious unicorn (thus the title), with various mythical characters that gave clues or played tricks along the way. Hedge shapes and colors varied according to the storyline, and flowers added color. Lacy Gothic archways mixed with topiaries shaped like turrets and towers gave the impression of a surreal and overgrown castle estate. Part of the maze was laid out in the rough shape of a unicorn's head. 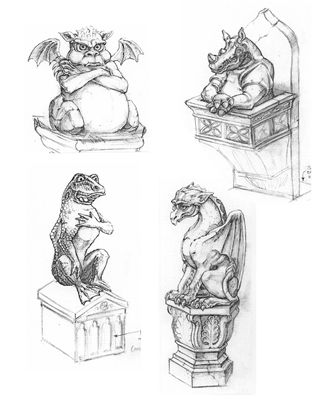 The journey through the maze was divided into four main sections: three outdoor areas ruled by different mythological characters, and a castle at the end where the unicorn lived. In each of the three outdoor areas, guests meandered through pathways, reading signs and finding clues, until discovering the "payoff"—an Audio-Animatronic character that gave entrance into the next section. Along the way, stone gargoyles offered comic relief and hidden clues. They guarded dead ends, played tricks, held confusing signs, or shot jets of water at unsuspecting guests.

A walk through the maze

The first section of the maze has a formal aesthetic, with sharp angles, tight leaf patterns, and regular shapes. Even the gargoyles in this section are more serious. In a clearing at the end of this area, we encounter a stone sphinx that is half-woman, half-lion. She sits quietly on her pedestal, looking out over her courtyard, until it is time to speak; then she grinds slowly to life, moving her wings and delivering a cryptic message about starting every journey at the beginning. 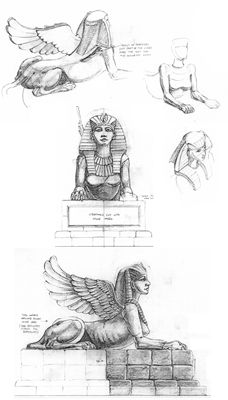 A sphinx greets guests at the end of the first section of the hedge maze, presenting a riddle to guests. Concept sketch by Maggie Parr (© Walt Disney Imagineering, unauthorized reproduction prohibited). Click on the image for a larger version.

After leaving the sphinx, we pass under a bridge into the second area of the maze, where the atmosphere turns playful. Hedges curve more, vary in height and shape, and are sprinkled with colorful blossoms. Water spouts leapfrog overhead. One dead end spirals into itself until hitting a twisted topiary at the center. Another section of the pathway turns into a bridge over a small pond, where water spurts up and over the pathway, and gargoyle heads set into the hedge wall call out jokes. After successfully navigating this part of the maze, we come upon a clearing graced by a topiary bird on a flowery throne. It periodically comes to life, flapping its green "wings" and declaring that it's a phoenix, sent to guide people on their journey to discover the hidden unicorn. Red and orange flowers surround the elaborate nest, symbolizing a phoenix rising from the ashes of a fire.

From here, we pass over a bridge and enter the final part of the maze. Here, routes turn sharply back and forth in one final effort to deter us from reaching our goal. A wall of gargoyle heads offers interactive entertainment. By stepping on different tiles in the ground, we elicit different responses from the stone faces: jokes, blasts of air, or a sudden jet of water. After this, we meander through pathways of red and white flowers—the area of the maze shaped like a unicorn. At the end of this path, we pass through an archway into a courtyard guarded by a golden griffin. This third Audio-Animatronic character rises up, twitches its wings, lifts its front claw, and delivers an ominous message about nearing the end of the journey. 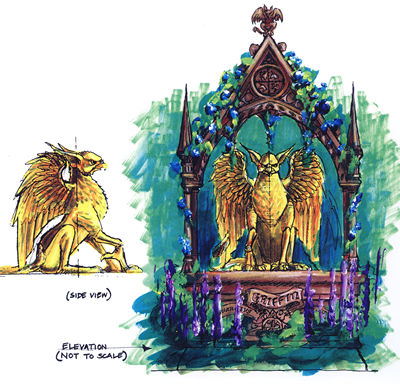 After passing by the griffin, we enter the castle area. From a balcony overlooking the maze, we gaze out over the land, seeing the unicorn head made out of flowers and watching others make their way through the maze. After getting enough of the view, we descend a flight of stairs into the unicorn's secret chamber. The light dims as we make our way into the grotto at the heart of the castle. Delicate Gothic-styled stalactites draped in flowers drip from the ceiling, and gentle waterfalls feed a small pool lit with eerie green light. On a rock in the center of the water sits the white unicorn, quietly watching us and giving mysterious messages about the journey of life. After lingering here for a while longer, we exit the castle maze and return to the rest of Beastlie Kingdomme.

We faced many challenges in bringing this attraction to life. We didn't want the audio-animatronic unicorn to look like a "talking Mr. Ed with a horn," as Joe Rohde put it, so we hid speakers throughout the room to give the impression that the unicorn was speaking "telepathically." Since guests could take as much time as they liked to make their way through the maze, there was a concern about guest flow, and keeping lines to a minimum. All pathways had to meet ADA width requirements for guests with disabilities, and we built in several emergency exits in case people got lost or needed help. 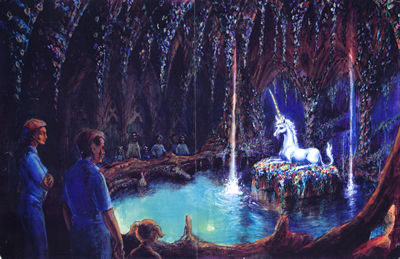 Having completed the maze, guests finally gain an audience with the fabled unicorn. Concept painting by Maggie Parr (© Walt Disney Imagineering, unauthorized reproduction prohibited). Click on the image for a larger version.

Working with live plants meant we'd have some very interesting dilemmas to solve. If we were going to open the attraction with a large number of mature topiaries, we'd have to start growing them years in advance. All the different species of hedges and flowers had different requirements for maintenance and feeding, and would need careful planning to keep everything healthy. We'd also have to account for a certain amount of guest abuse, intentional or not. In Alice's Curious Labyrinth in Disneyland Paris, some of the plant walls deteriorated because male guests relieved themselves in the more private areas of the maze. Because that's usually not an accepted cultural practice in America, we didn't think it would be a problem in our maze—but we tried to plan for every contingency.

The end, for now

Unfortunately, as we all know, the Quest for the Unicorn hedge maze was never built. When budget restrictions forced the Animal Kingdom team to cut a major portion of the park, Beastlie Kingdomme took the hit. Now the project sits in the vaults at Walt Disney Imagineering, where it shares company with all the other wonderful designs that never got funding. Of course, no one ever knows for sure if Disney will ever build Beastlie Kingdomme—but there's no harm in dreaming.

Maggie Parr will be speaking about her work at the National Fantasy Fan Club's 2006 Disneyana convention in Anaheim, California, on Friday, July 14. Her original paintings and limited editions are being sold in several shops in the Disneyland Resort, or through Disney DelivEars.