“We're going to Disney World!” A well-known phrase no doubt uttered by thousands of families around the world this summer. But in this era of “reality” television, even a trip to the Magic Kingdom can blur the line between fact and fiction. For more than a decade, several sitcom families have left the cozy confines of their sets to play with Mickey and his friends. While most have headed south to Florida, one family, the Russos on NBC's Blossom, decided to enjoy the magic in their own backyard of Southern California.

The Disney Company believes fully in the concept of synergy, so what better way to bring the new family together than to send some of the ABC family members to visit Disney?

It is no coincidence that most of the vacations took place on shows that aired on ABC or that the majority took their vacations in 1995/1996. On July 31, 1995 the Disney Company and Capital Cities/ABC announced a $19 billion merger, according to Dave Smith in Disney A to Z. The merger became official on February 9, 1996 and, along with ABC, Disney acquired, “nine VHF and one UHF TV stations, 11 AM and 10 FM radio stations, a percentage of ESPN, The History Channel, A&E Network and Lifetime,” in addition to a publishing group that it later sold.

Of the three pre-merger shows, both Blossom and The Golden Girls were produced by Disney-owned Touchstone; the third show, Full House, aired on ABC and might just have been a case of “let's see what happens when we do this” between the network and the media giant. But, ABC's relationship with Disney goes back to 1954 when the company needed a network to sponsor the creation of Disneyland the park, and in return created a hit TV show, Disneyland.

While many TV critics consider a vacation episode to be “jumping the shark” (a term coined after someone dared the Fonz on Happy Days to water ski over a shark; what some consider a publicity stunt for the show) I think they're just good fun.

So, for your enjoyment, here's a rundown of the pre, post and mid-merger vacations complete with show title, air date, attractions highlighted and, of course, Disney-inspired epiphany. Whether it's jumping the shark, synergy gone awry or just good old Disney fun is up to you. 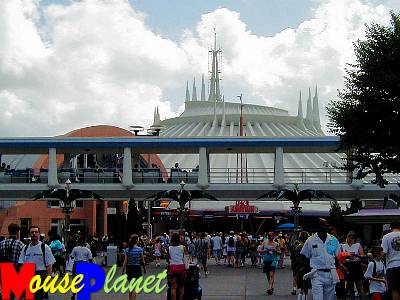 Dorothy (Bea Arthur) decides that she and her mother, Sophia (Estelle Getty) need quality time together. Dorothy says they can do this wherever Sophia wants. Sophia suggests Walt Disney World because she wants to ride Space Mountain, but all Dorothy wants to do is stay in the hotel and look at old photos, letters and slides.

Sophia gets angry at Dorothy for living in the past and goes to the hotel lounge. Once there, she tells the piano player, “If you can play it for her, you can play it for me,” and he proceeds to sing a 1940s-style version of the first verse of “It's a Small World.” Dorothy realizes that she can't live in the past and she has to enjoy being with her mother while she can.

Before returning to Miami, Dorothy tells Sophia they have a few hours left and asks what she wants to do. The next shot shows the interior of Space Mountain with Sophia's voiceover declaring, “Now this is quality time!”

Note: None of the show was shot in the park. 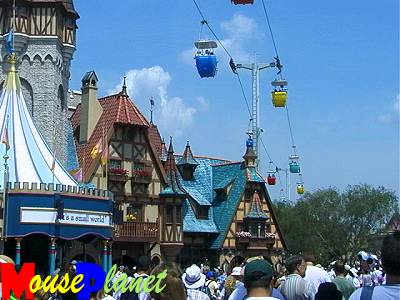 The episode is told in fairytale format. Nick Russo, patriarch of the clan, gets a mysterious gig at Disneyland and uses reverse psychology on his three kids to get them not to go. So of course as soon as he leaves, his daughter, Blossom; sons, Joey and Tony; Tony's girlfriend, Rhonda; Blossom's best friend, Six; and boyfriend, Vinnie; all head to the Happiest Place on Earth.

Vinnie keeps his distance for some unknown reason, and while Six and Blossom ride the Skyway to Tommorowland, they catch him in the arms of a another woman. Nick continues to hide his role—that of an Elvis impersonator—and makes friends with Belle and The Party, the Mickey Mouse Club spin-off band. Six has a difficult time seeing all the “happy nondivorced people” remembering all the trips she took to the park with her recently divorced parents. Joey unsuccessfully hits on every woman he sees , including Suzy Mouse from Cinderella. Meanwhile, every character in the park—including the Audio-Animatronic Abraham Lincoln—hits on Rhonda, a former model. “And you call yourself Bashful,” Tony scolds. “That was Sneezy,” Rhoda points out.” “You mean Sleazy,” Tony counters.

The kids see Nick—who is still courting Belle—as Elvis, and it doesn't matter to them. Joey hits his head and dreams of making out with a princess, but wakes up to find a nun who tells him, “You and me, Splash Mountain.” Rhonda tells Tony that he has nothing to worry about and he's the only guy she wants. Six realizes that Disneyland really is a happy place, and wrangles in a Jungle Cruise skipper — who even lets her shoot a hippo. Blossom finds out that the woman Vinnie hugged was his cousin — and that he has a fear of heights, which is why he wouldn't ride anything. And they lived happily ever after as all the couples enjoy a kiss or two as The Party sings, “It's All About Love.” The final park scene shows Blossom and Vinnie flying through the air on the Rocket Jets. 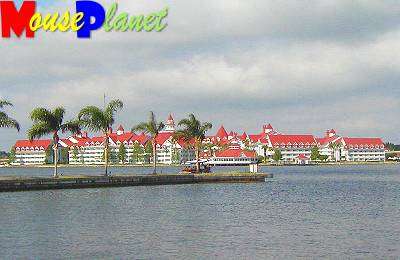 Uncle Jesse's band, the Rippers, gets a gig at Walt Disney World over his anniversary. He and his wife, Becky, plan to have a second honeymoon, but realize they would miss the kids too much, so they take them, too. Joey, who co-hosts a radio station with Jesse, gets permission from the station to take the show to Florida. Danny's morning talk show, Wake Up San Francisco, is in reruns and, coincidentally, D.J., Steph, Michelle and Kimmy (whose parents will pay for any vacation as long as it's not with them), all have school vacation. Plus, Danny's long-distance girlfriend, Vicky, flies down. So the only one left behind is D.J.'s boyfriend, Steve.

In part one, the family stays at the Grand Floridian (a great plug for the beautiful hotel). Once they leave the hotel, they go their separate ways: Jesse to rehearsal, Joey to meet an animator friend of his, the four girls to the Magic Kingdom and Danny to World Showcase at Epcot to meet Vicky.

Jesse returns from rehearsal to meet Becky and the boys in the Magic Kingdom. She reminds him that he has to do his radio show, and he promises that he will have a romantic picnic at the hotel later.

Middle sister Steph and youngest Michelle, who've been fighting since before they left for Florida, both see if they can become princess for the day by rubbing the lamp and making the genie appear. When neither can decide whose turn it is, D.J.—who sees Steve everywhere, even though he's back in San Francisco—sends Michelle up first (explaining that she's “just a little kid”). So, of course, Michelle gets the crown and then forces the others to ride Cinderella's Golden Carrousel 10 times (really) because, as princess, she gets three wishes—the first of which is to never wait in line. When Michelle hears the other girls calling her bossy, she runs off.

Meanwhile, Danny meets up with Vicky and attempts to propose several times, but he keeps getting interrupted—first by dancers in Germany, then by Jesse and Joey, who are broadcasting their radio show underwater at The Living Seas. Finally, Danny gets a call that Michelle is lost.

Part two begins with Michelle in Adventureland where fellow princess Snow White finds her dancing to the calypso band. Michelle decides she wants her second wish to have a tea party with Mickey and his friends. Danny, Vicky and the girls come to the tea party where Michelle apologizes, but tells them she ran away because she was the princess and no one would do what she says. Steph can't believe that Michelle runs away and still gets a party. After the family takes in a show at the Indiana Jones Adventure, Steph decides that she's sick of Michelle always getting what she wants, and decides to return to the hotel.

At this point, Jesse is in hot water with Becky because—thanks to Joey's fear of sharks—he was stuck in the broadcast booth longer than they should have been. He runs to the lobby and sees her heading to her room, so he calls to her, but she just shakes her head. He goes to the piano and serenades her with a ballad called, “I'm Sorry.” It must have worked because the next scene shows them in a boat on the lagoon.

After a day full of rides—and hallucinations—D.J. thinks she sees Steve checking in, but this time she's right. He said he kept seeing her everywhere, too, and that's when he knew he had to come.

Joey reminds Steph how much she loves her sister and that she missed out on a lot of fun. Michelle then shows up and gives her crown to Steph, telling her she probably should have been the princess. Snow White then tells Michelle that because she was so unselfish, the entire family can ride in the Party Gras parade—with both Michelle and Steph garnering spots on the Princess float.

The final scene shows the Rippers' night concert in front of the castle where Jesse wishes Becky a happy anniversary, and sings “A Dream Is a Wish Your Heart Makes.” Danny arranges for a sign that reads: “Vicky, Will You Marry Me?” Of course she says yes.

So while the fireworks go off, Steph and Michelle make up, Joey dances with Snow White, D.J. and Steve share a kiss and Kimmy tries to steal Prince Charming—without much success—and Becky has tears of joy in her eyes.

Those were the pre-merger shows—quite a lot of “magical PR (public relations)” for Disney at a fairly low cost.

How many Disney-themed shows do you think ABC can cram into a single season? And which member of the Connor clan on Roseanne do you think is affected most by a visit to Walt Disney World? Check out Part 2 of Sitcoms on Vacation.