I'm in a swoon. It's unusual, because there's a lot of Disneyana around my house: books, magazines, CDs, signs from the theme parks, souvenirs of every size and shape, a few heads from The Haunted Mansion… there are a lot of wonderful things here. But I just bought The Disney Treasures a few weeks ago and everything else in my collection is awfully jealous. 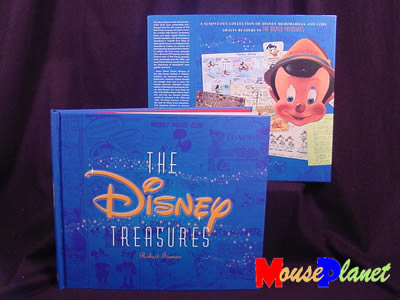 The 64-page book comes with a slipcover that safeguards the treasures inside. Photo by Adrienne Vincent-Phoenix.

Can you remember ever paying $60 for a new book that's only 64 pages long? Probably not, but The Disney Treasures is truly something special. A big (12 by 10.5 inches) hardcover in a heavy slipcase, it falls into that recent genre of books with pockets in the pages filled with die-cut objects. The kind of objects that are so rare you never thought you'd see them, let alone hold them in your hands. These kinds of interactive books bring you into their experience in a tactile way, and here it's like taking a stroll through the Disney Archives with its manager for the past 13 years, author Robert Tieman. 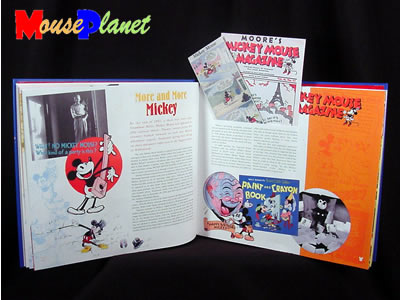 The book consists entirely of 28 two-page spreads (right and left facing pages), each devoted to a different aspect of Walt Disney's life, history of the Walt Disney Company, film and TV productions, the theme parks, and more. And all but a few of these two-page spreads have at least one facsimile reproduction of some piece of Disney memorabilia tucked into a pocket—many have two and even three or four separate items.

Take a look at the very first spread, “How It All Began,” which details Walt's early life. In addition to the meticulously researched text and the gloriously rare photos, the pocket contains two things: the first is a facsimile of “My Golden School Days,” a small memory book of Walt's from 1917. It contains his handwritten notes and drawings. The second is a postcard Disney sent his mother the same year with a lovely cartoon he drew on the front. Priceless pieces and never to be seen outside the Disney archives (or the possession of the Disney family, an additional resource for the book) until now.

Later, in the “Mickey Mania” pages, there's a facsimile of a 1929 letter from Walt to his wife Lillian about how his trip to New York is going, and the reception to the new Mickey Mouse cartoons. The pages on “Donald” contain a pocket with labels from Donald Duck Applesauce, Donald Duck Sandwich Spread, Donald Duck Loganberry Jelly, and Donald Duck Cocktail Sauce. The pocket in “More and More Mickey” contains (on facsimile newsprint) a reproduction of the first Mickey Mouse Sunday color cartoon strip from 1932 and a “Mickey Mouse Magazine” given away by local dairies across the country. 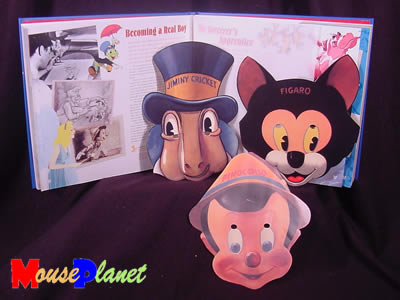 The book includes reproductions of these rare Pinocchio premiums. Photo by Adrienne Vincent-Phoenix. 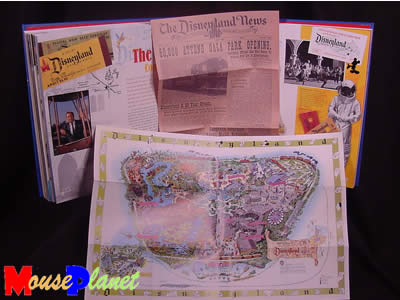 And that's not the half of it. Once you've spent hours reading the book and fondling all the treasures it contains, you can pop in the CD that comes nicely nestled in a pocket inside the front cover, and listen to almost an hour of speeches by Walt Disney running from 1937 (at the premiere of Snow White and the Seven Dwarves) all the way to his dedication of New Orleans Square at Disneyland in 1966, the year he died. The CD also includes radio interviews with Walt, speeches at the opening of various attractions (such as “A Small World”), Walt's speech from the opening day ceremonies at Disneyland, and radio advertisements for Disney films and products.

This remarkable book is guaranteed to bring a great big smile and hours of pleasure to anyone who's interesting in Walt Disney, his life, and achievements.