The day started at 7:00 a.m. for members of the CPHS as well as members of the Disney Vacation Club and cast members. Check-in in front of the entrance to the Magic Kingdom was very smooth and the guests were given commemorative badges on lanyards to identify them as part of the rededication group. 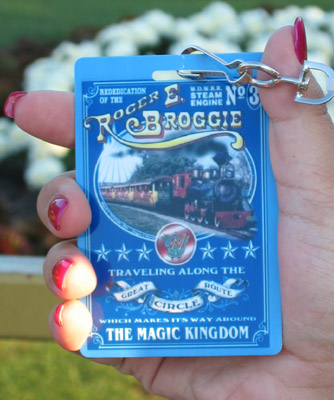 Attendants each get a special lanyard to wear during the event, and to keep as a souvenir. Photo by Kenji Luster. 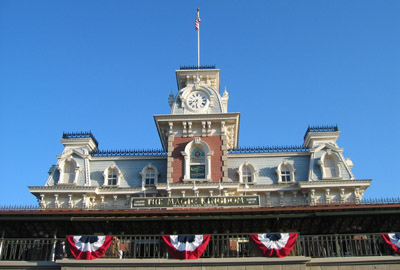 The WDW Railroad station provides the backdrop for the special ceremony. Photo by Kenji Luster.

The group was greeted by Scoop Sanderson (a WDW Cast Member (CM) whose character is a reporter for Main Street) who welcomed everyone and started the festivities with his usual enthusiasm. He was joined by other talented cast members and all the characters who treated everyone to a musical number!

Characters welcome participants to the event. Photo by Kenji Luster.

Scoop then introduced the guests to Mickey, Minnie, Michael Broggie and his brother, Roger Broggie, Jr. Michael thanked Scoop and announced to the group the presentation of The Walter E. Disney Railroader Award, the highest award the CPHS gives, for all the men and women who work on the steam trains. Then with much fanfare and streamer explosion, Michael and Roger, Jr. declared the Roger E. Broggie Steam Train rededicated.

The event was so well attended, they had to break the group into two groups to accommodate everyone on the train trip. During the trip to Mickey's Toon Town, the guests were treated to a special description and history lesson by the various cast members who work on the WDW Steam Trains. They were shown how the trains back up into the roundhouse from the Toon Town station and how difficult it can be.

After arriving at the roundhouse and disembarking, the chat began on the grassy patch next to the tracks where a small stage and sound system had been set-up especially for this event. Jim Korkis, the WDW historian, greeted everyone and then introduced Michael Campbell, one of the CPHS Board of Governors. 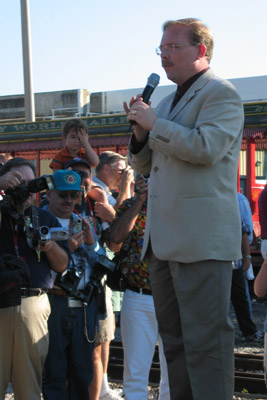 Society Board of Governors member Michael Campbell speaks to the participants during the rededication ceremony. Photo by Kenji Luster.

Michael Broggie and Roger Broggie, Jr. join Mickey to listen to Joel Fritsche on stage. Much to everyone's pleasure, Mickey had changed into an engineer's costume. Photo by Kenji Luster.

They spoke about how the steam engines were found in Mexico by Roger Broggie, who purchased them for WDW and had them shipped to Florida. Other little-known facts were shared, such as the condition the trains were in when they were found, and what it took to restore them. 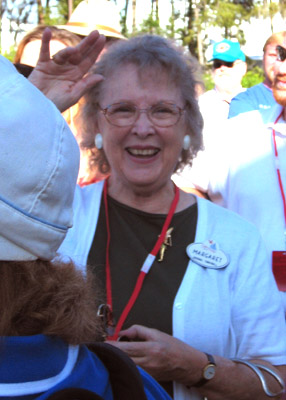 Among those in attendance was Margaret Kerry, the original actress/model for Tinkerbell! She is truly an elegant, gracious and giving person. Photo by Kenji Luster.

After the chat at the roundhouse, the group boarded the train for the ride back to Main Street. The Main Street Theatre was the next destination for a presentation by Michael Broggie about his father and his father's friendship with Walt Disney.

Michael spoke at length about the special relationship his father and Walt had and the trains they built together.

It was easy to see the admiration Michael has for his dad's legacy, the work he did, as well as the respect he has for Walt Disney and all that he contributed to the world. He told the audience about how Roger and Walt collaborated to build the 1/8th scale railroad in Walt's backyard, then the steam engines for Disneyland. Roger, Jr. then joined him onstage and two of them answered questions from the audience. 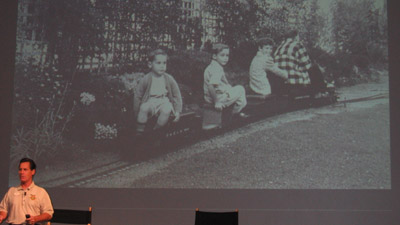 Michael Broggie narrates a slide presentation of memorable photos from the past, including this photo of Roger and Walt on a train. Photo by Kenji Luster.

When the presentation was over, everyone in the audience was sad to see that the event was over. But Michael and those involved in the various day's presentations had to do it all again for the next group of people.

Everyone then moved over to the Villas at the Wilderness Lodge for a dedication ceremony of the Iron Spike Room—a place filled with pictures and memorabilia of Walt Disney's love of trains. Why don't you stop by and visit the room the next time you at Walt Disney World? You don't have to be staying at the Villas. 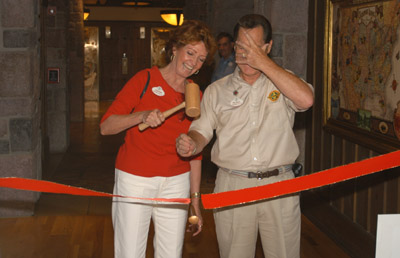 Sharon and Michael share in the ribbon cutting ceremony. Photo by Kenji Luster.

There are so many intriguing, humorous, and interesting stories that Michael Broggie shared with everyone during the two days of festivities that I can't even remember them all to recall them here.

I encourage you to go to Walt's Barn in Griffith Park, on the third Sunday of every month. The admission and parking are free. The volunteers love to show people around, talk about Walt and his love of trains and how they came into being at Disneyland, as well as Roger Broggie's part in it all.