This past Saturday, Disneyland premiered its newest stage show, Snow White – An Enchanting New Musical. By invitation only to celebrity VIPs, the media, and parents of children participating in the premiere, the Disney company spared no expense in promoting its newest show. 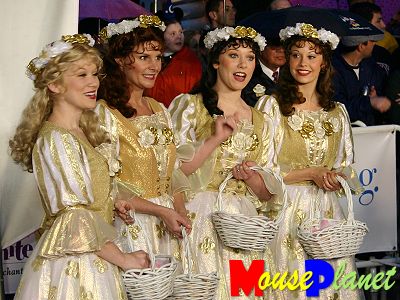 Four maidens greet the guests as they walk up the red carpet. Photo by Alex Stroup.

From a red carpet that led into the Fantasyland Theatre and complimentary souvenirs to a lavish post-premiere party, it was more than evident that Disney executives rated this show on the same level of importance as the opening of Disneyland's refurbished Tomorrowland in 1998 or even a whole new theme park. Even the embattled Chairman and Chief Executive of the Walt Disney Company, Michael Eisner, was on hand to promote the musical.

The red carpet portion of the premiere got off to a late start due to the unrelenting downpour of rain that continued well into the night. At the last moment before the celebrities began arriving, cast members brought out industrial shop vacuums in a vain attempt to dry out the soggy red carpet. 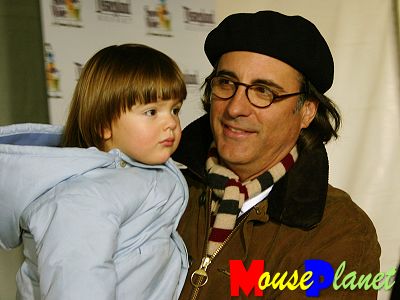 As each guest entered the theatre, they were gifted with blankets embroidered with the Snow White musical logo and a large souvenir popcorn bucket. 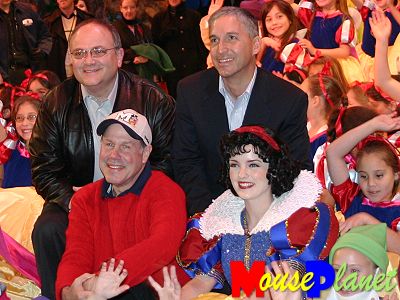 The show commenced with the surprise entrance of approximately 200 little girls dressed as Snow White and 50 little boys dressed as the dwarfs. Opening remarks were delivered by Michael Eisner:

“Good evening, everybody. Welcome to the premiere performance of Snow White – An Enchanting New Musical. Where else could we have 200 Snow Whites right in front of me and 50 dwarfs?

“We really are thrilled to bring this classic animated musical to the stage. This musical is the animated film created by the Walt Disney Company. This film and Mickey Mouse together are the bedrock of the history of the Walt Disney Company and we are thrilled to be able to continue our adventure in legitimate theater. Beauty and the Beast, Lion King, Aida in New York and Aladdin over at the park right next door at Disney's California Adventure. We're thrilled to now have Snow White here in the Magic Kingdom.

“It's directed, brilliantly I think you'll agree, by Eric Shaeffer, with costumes by Michael Curry.”

[Note: Curry is noted in the program as responsible for the design of the Magic Mirror, Ellen McCartney is credited with costume design.]

“I think you'll see that they did a fantastic job. We are honored to be joined by two of the original animators, two of the men who actually worked and created Snow White and brought it to life: Joe Grant and Frank Thomas. In addition to Joe and Frank, from 1939, the original Academy Award presented to Walt Disney himself for this animated masterpiece.”

[Sets pull back to reveal Grant and Thomas seated, with the eight Oscar statuettes placed on a table behind them]

“In honor of these gentlemen… And by the way, they're still working in feature animation. Joe Grant is there all the time.”

“In honor and celebration of your incredible achievements, we're thrilled to present you with a beautiful work of art. The inscription on the beautiful work of art (and I'm not necessarily talking about these beautiful ladies, I'm talking about the apples), the inscription reads: Your incredible artistry in creating this timeless classic for the young at heart everywhere, thank you for a never-ending wish that comes true.” 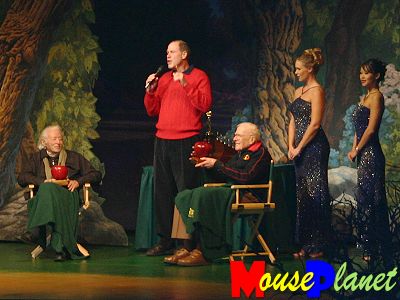 “You have no idea, no idea, how much talent I'm standing between. Trust me. And now, it's our great pleasure to present the classic tale of the fairest one of all, Snow White, an enchanting new musical. Thank you very much.”

The following review contains spoilers for the show. Go directly to the post-premiere party section to avoid reading any detailed spoilers.

It was readily apparent that a lot of money was spent in staging this musical. The sets include a revolving dwarfs' cottage and a partial castle. The forest scenery was built out in layers to give an illusion of depth.

The choreography designed for the show is higher than the standard theme-park show moves, which usually consists of “step-touch, step-touch, turn, turn.” The dance chorus is costumed as forest creatures, and generally are given animal-like dance moves, except during chase scenes, where a great deal of classical ballet moves are used instead. 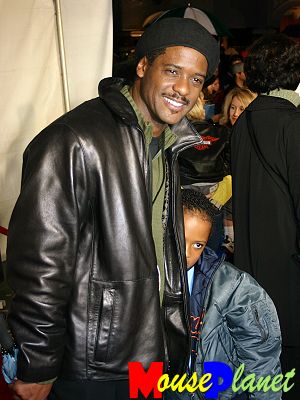 Blair Underwood on the red carpet. Photo by Alex Stroup.

It appeared that only two whole sections of dialogue were retained from the animated movie: the scene in which the evil queen transforms herself into the old hag, and in the scene when the old hag visits Snow White in the forest.

More interestingly was the use of modern-day slang. One glaring example is during the scene where the old hag gives Snow White the apple. Snow White scolds one of the forest creatures by saying, “Bluebird? Time out!” (The children in the audience laughed hard at the line.)

The rest of the dialogue, even when not really necessary, was reworded. The Prince's role was considerably beefed up in the opening scene to clearly spell out the young couple's love for each other and Snow White's fear of the Evil Queen.

In this reviewer's opinion, the highlight of the show had to be “The Silly Song.” Incorporating many of the slapstick gags from the movie, the dwarfs stole the show with some very clever choreography. 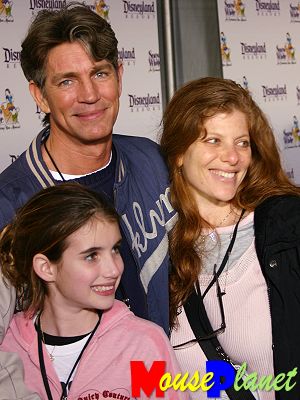 Less Than Perfect's Eric Roberts with his wife and daughter. Photo by Alex Stroup.

The Magic Mirror is a high-tech treat. Created by Michael Curry, who won a 1998 Drama Desk Award for Outstanding Puppet Design for The Lion King musical, the mirror cleverly uses “shards” of glass that move in order to create facial expressions as the mirror speaks. The voice of the Magic Mirror was provided by actor Patrick Stewart, and is used extensively to narrate and move along the story during key scenes of the musical.

There was one technical glitch during the performance, where the show had to be halted for five minutes. Halfway through the show, the rain was coming down so hard that it could be heard even above the booming show sound system. At that point, the sound cut completely out. The use of high-tech effects such as the Magic Mirror and rapid scenery changes coupled with the use of a carefully timed soundtrack probably will require a period of time to work out any performance bugs.

It has been mentioned in previous reviews that the Prince was to arrive riding an actual horse in the final scene. There was no sign of the horse in the premiere performance. It is yet to be seen whether that was due to the heavy rain that evening or due to a decision to remove this effect from the show on a permanent basis. 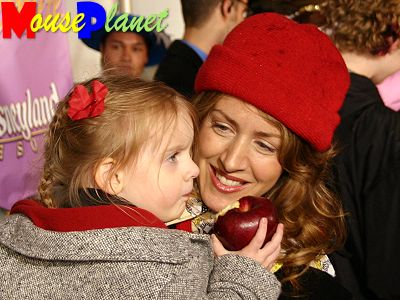 Following the performance, which was particularly well-received by all the little girls in the audience, Michael Eisner posed with some of the Snow Whites onstage, along with Jay Rasulo (president of Walt Disney Parks and Resorts worldwide), and Matt Ouimet (the new president of the Disneyland Resort).

The musical is quite good by theme park standards, but is it (as stated by Michael Eisner) worthy of the title of “legitimate theatre”? Can any theme park show claim this honor? In any event, although it may not achieve the cult-like status of other shows like the Festival of Fools show at Disneyland, which garnered a large and loyal following, it certainly will appeal to little girls who love the classic Disney princesses.

The post-premiere party at Innoventions turned the rather sterile attraction into a disco, complete with a live band and go-go dancing cast members. Featuring buffet stations on both the first and second floors, the party provided martini bars and waiters to attend to each celebrity's every need.

Of special note was Stacia, a cast member who would quickly draw sketches for the party guests of any requested Disney characters, complete with personalized autograph. Upon talking with her, we found out she not only a whiz at character drawing, but is responsible for ensuring that characters are always drawn correctly across the entire Disney company. Certainly, a talent like hers deserves an article highlighting her talents and responsibilities in a future MousePlanet edition.

Apparently you're supposed to eat the apple, after all. Photo by Alex Stroup.