At 4 p.m., the Parade of Stars made its way through the park. All the celebrities were riding in dozens of Chrysler Sebring convertible cars. The afternoon was still over 100 degrees, but the stars kept the smiles going and seeming to be in good spirits. The parade lasted about 15 minutes with a steady stream of cars, celebrities, smiles and waves, and park visitors were thrilled at the chances to see all their favorite ABC stars on one place. 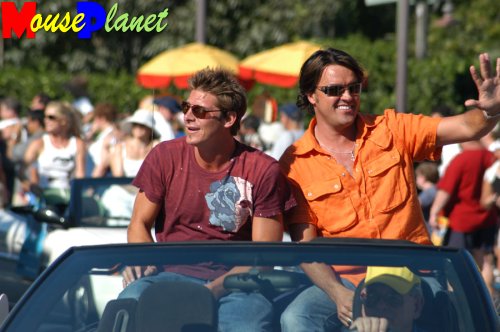 The cast of Extreme Makeover: Home Edition was especially having fun with the guests. They were the only ones in the parade that were not ?actors,? and they were thrilled to be included in this celebrity circle. 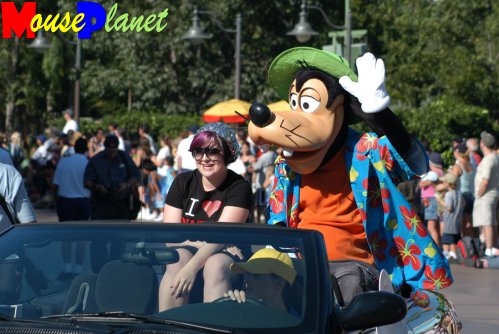 Kelly Osbourne and Goofy in the parade. Photo by Frank Anzalone. 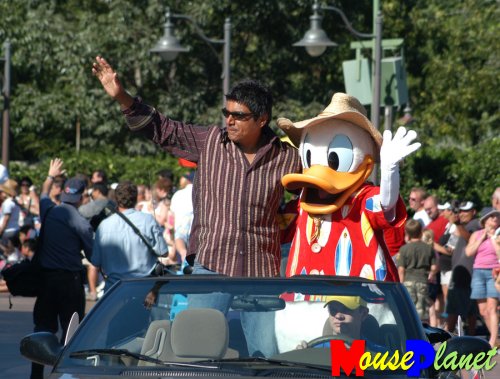 George Lopez rides with Donald Duck in the Parade of Stars through Disney's California Adventure during the 2004 ABC Primetime Preview Event. Photo by Frank Anzalone. 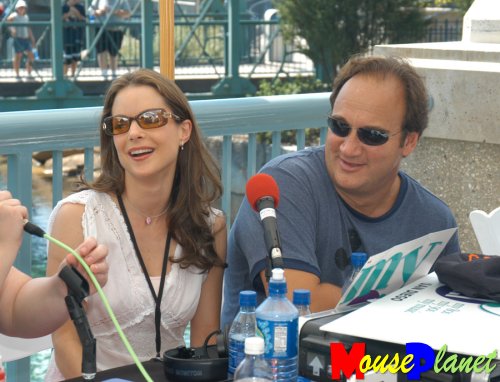 Besides meeting with park visitors, the ABC celebrities are busy promoting their shows with both local and national media. Kimberly Williams and Jim Belushi do a radio spot for 94.1 FM San Diego during the 2004 ABC Primetime Preview Event. Photo by Frank Anzalone.

The highlight of Saturday evening was a concert at the Golden State Amphitheater with Jim Belushi and the Sacred Hearts. Made up of semi-professional musicians with ?day jobs? who are just ?friends getting together to jam,? the band played solid R&B material with real live vocals and instruments (nothing prerecorded or synthesized). 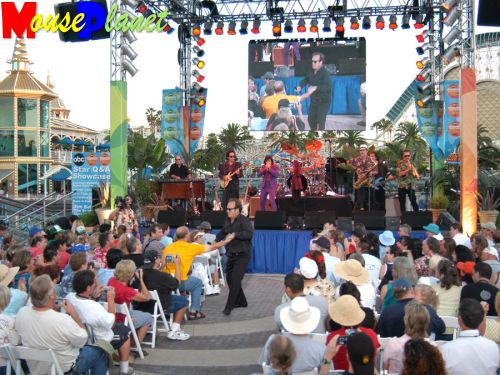 The opening song, ?Sweet Home Chicago,? got everyone clapping and toe-tapping, but the song that brought down the house was an awesome rendition of ?Soul Man.? Jim and the boys in the band really had the audience feeling as if they were on stage with them just having a great big party time. There were times when Jim would bring an audience member to the stage to join in on the dancing? and there were times he would go out into the audience to sing and dance among them. Belushi demonstrated his versatile abilities and was a true showman, a man of many talents. 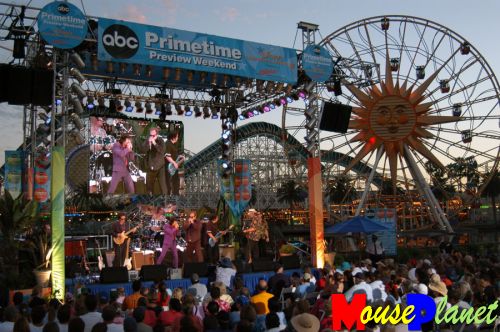 Jim Belushi and the Sacred Hearts concert at DCA. Photo by Frank Anzalone.

Overall, Disney made great efforts to showcase the stars and their shows with the added benefit of the boosting the attendance draw to the theme park without the obvious ?in your face? promotion of the product. Call it want you want: Co-op advertising, cross merchandising or company synergy? for the Walt Disney Company and its subsidiary, ABC? it worked!

For the third year in a row, Disneyland and ABC displayed corporate synergy as Disney's California Adventure hosted the ABC Primetime Weekend event on September 10, 11 and 12. 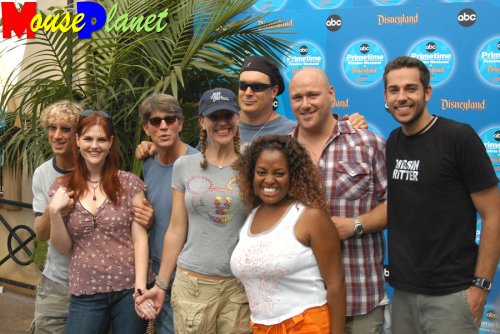 The cast of Less Than Perfect. Photo by Frank Anzalone. 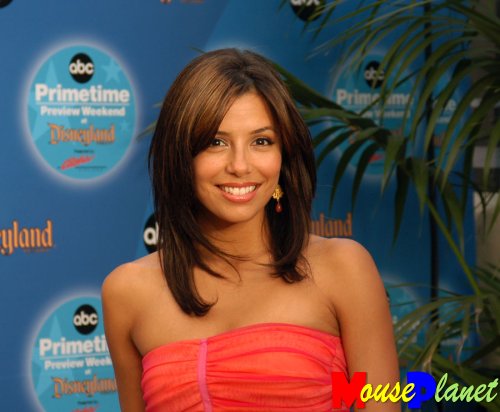 Eva Longoria is one of the stars of of the new ABC-TV show Desperate Housewives. Photo by Frank Anzalone. 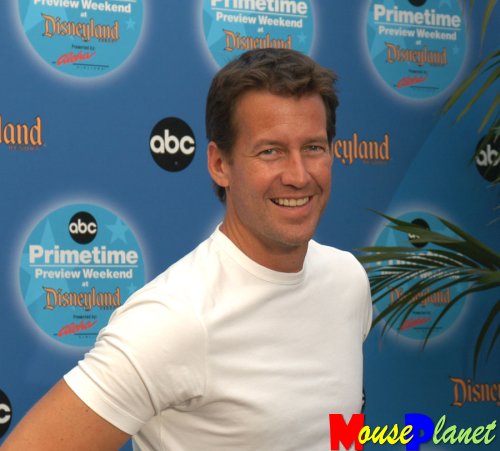 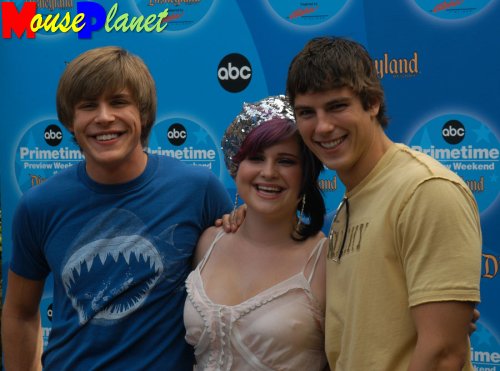 The cast of ?life as we know it.? Photo by Frank Anzalone. 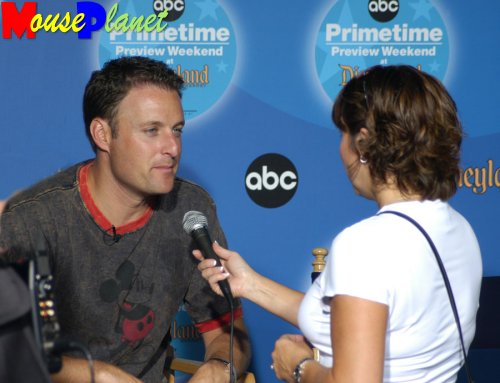 Mickey Mouse shirt-donning Chris Harrison, host of The Bachelor, responds to questions during a media interview. Photo by Frank Anzalone. 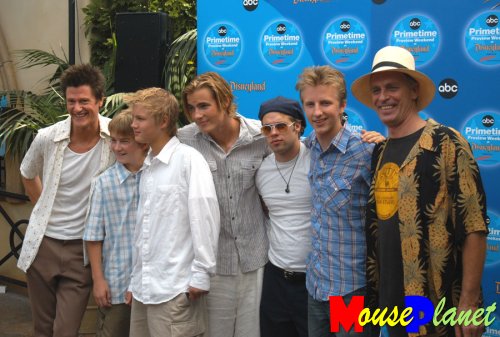 The cast of Complete Savages. Photo by Frank Anzalone. 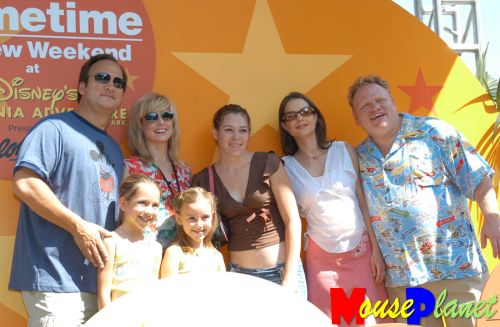 Park visitor Barbara Kessenich (center) was rewarded for her patience with a photo opportunity with the cast of According to Jim. Photo by Frank Anzalone. 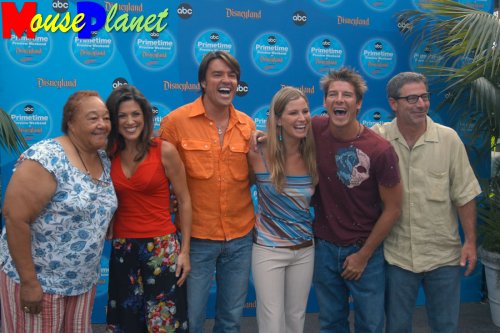 The cast of Extreme Makeover: Home Edition: Sweet Alice Harris, Constance Ramos, Michael Moloney (the guy with the always friendly big smile), Tracy Huston, Ty Pennington, Paul DiMeo. This cast was one of the more popular with the guests. One guest said she waited in line for over two hours to have a moment with this cast during their photo op appearance.. Photo by Frank Anzalone.

Jim Belushi and the Sacred Hearts

For information on our coverage of previous years' events, see our 2003 coverage or 2002 coverage.