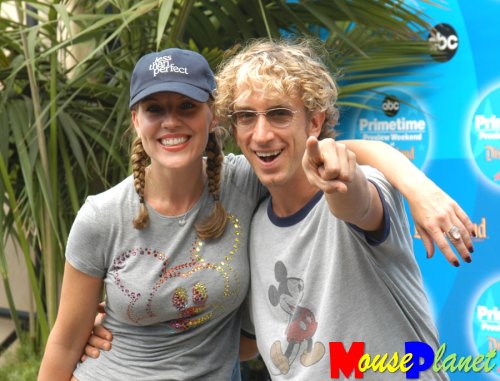 On a hot 100 degree-plus Southern California weekend at the Disneyland Resort, the word ?fan? meant many things? but in this case, it describes the tens of thousands of guests who visited the Disney's California Adventure park to admire and see their favorite celebrities at the ABC Primetime Preview Weekend event on September 11 and 12. 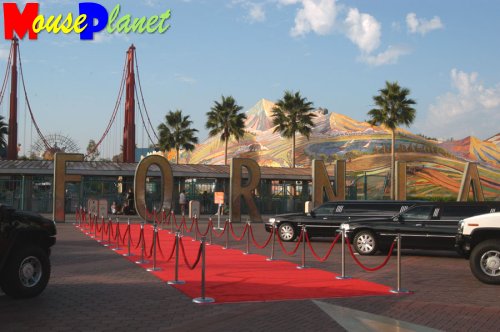 Red carpet entrance to DCA for the guests to experience on the way into the Primetime Weekend. Photo by Frank Anzalone.

The path to the entrance was decked out with a welcoming red carpet and a half-dozen stretch limousines. Many guests camped out at the front gate, anxiously waiting to be first in line at the various guest photo spots to have their picture taken with their favorite TV celebrities. 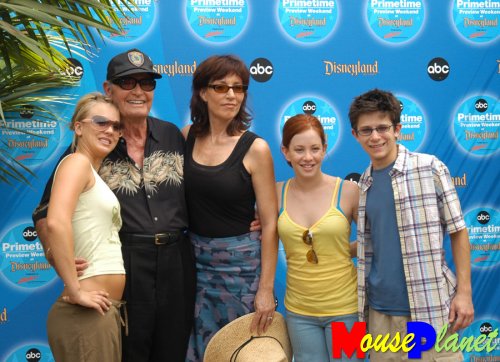 The cast of Eight Simple Rules. Photo by Frank Anzalone.

Of the current ABC shows, the casts of 8 Simple Rules, According to Jim, The Bachelor, The Benefactor, Extreme Makeover, Extreme Makeover: Home Edition, George Lopez, Hope & Faith, Jimmy Kimmel Live, Less Than Perfect, NYPD Blue, were in attendance. Cast members from the upcoming fall premier shows Complete Savages, Desperate Housewives, Life as We Know It, Lost, Rodney, also made an appearance at the event. 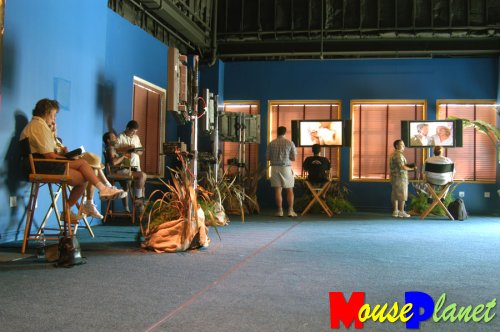 Disney had set up many activities for the guests and stars to see and experience: ?The ABC Star Q&A Showcase? at the Golden State Amphitheater, the ?ABC Preview Screening Room,? ?TGIF Sneak Peek,? many celebrity photo locations, live radio broadcasts and the Parade of Stars. 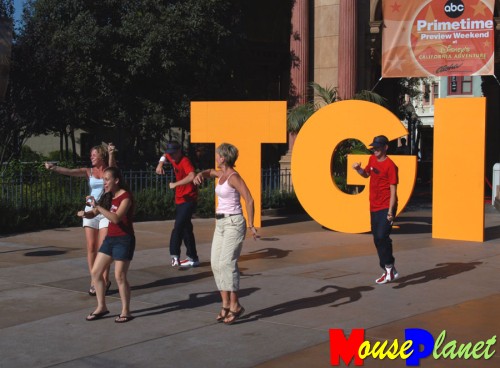 Park guests are invited to dance in the production of an upcoming ABC TV commercial for ?TGIF? night. Photo by Frank Anzalone.

ABC decided to use the energy of the event to film a TV spot (to air on Friday nights starting September 24) using park guests in the TGIF commercial advertising the new Friday night lineup. Carol and Brandee Cavanaugh of Yakima, Washington were encouraged by the director to dance. After a few moments of instruction, you heard ?Action!?? and the shoot was on.

?It was a great way to get people involved as well as developing a buy-in to watching Friday night TGIF programs. The experience of how much fun we had participating in the dance will be a memory my daughter and I will relive every time we see an ad for TGIF,? said Carol. 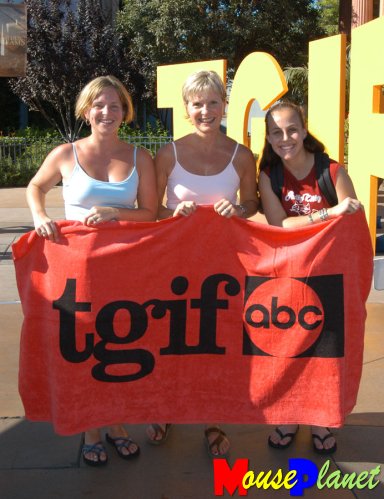 From left: Brandee & [her mom] Carol Cavanaugh and Traci display their gift of a TGIF bath towel after their dance taping. Photo by Frank Anzalone.

All day long, park guests patiently waited in the heat for the chance to have their picture taken with their favorite TV personality. Some were lucky enough to even get an autograph or two. Kristin from Riverside waited in line for over two and a half hours (starting at the entrance before the park opened) to have her picture taken with the cast of 8 Simple Rules. ?It was worth every moment,? she said. 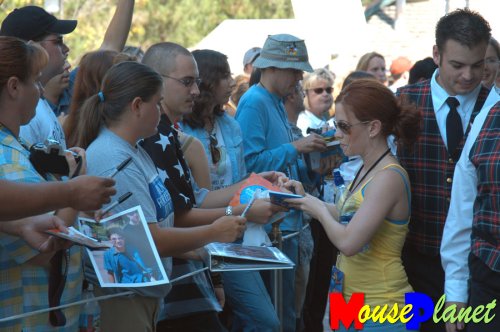 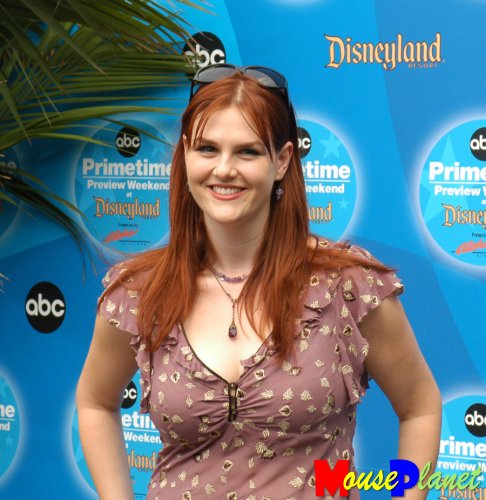 Sara Rue is ?Claude Casey? on Less Than Perfect. Photo by Frank Anzalone.

The ABC Star Q&A Showcase was very popular, filling the amphitheater to capacity with every cast that appeared. Chris Harrison, the host of The Bachelor/Bachelorette, hosted this event all weekend with great connection with the audience and TV cast members. 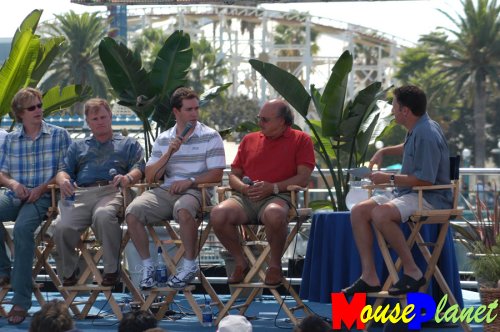 The cast of NYPD Blue on the ABC stars Q&A Showcase. Photo by Frank Anzalone.

George Lopez had the crowd laughing with his down-to-earth, quick-wit humor. And being from Southern California, there were many ?local? jokes some of the guests could appreciate even more. People cheered for the cast of NYPD Blue when they arrived, but there was an audible sigh when they announced it was the last season of this show during Q&A. 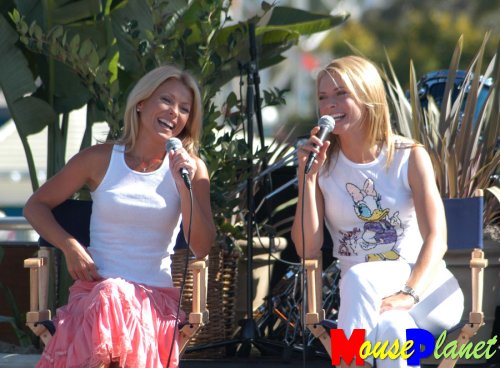 The biggest capacity crowd drawn was for the cast of Hope & Faith. Kelly Ripa (?Faith?) and Faith Ford (?Hope?) were just a delight on stage. Kelly was on the air in New York Friday morning with the Regis & Kelly show, then later that day she and Faith Ford taped Hope & Faith, then they both hopped an airplane and made it to DCA for this event mid-day Saturday. 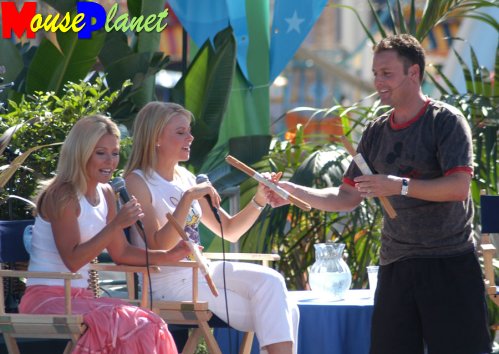 Faith Ford and Kelly Ripa try their "heaven on a stick" churros. Photo by Frank Anzalone.

On the way to the stage, Kelly had noticed the churro cart, and during the Q&A she asked, ?What is a churro? What do I know? I'm from New Jersey!?

In true Disney fashion, within moments, churros were delivered to the stage. The gals took a bite and Faith Ford settled back with a smile on her face and said, ?This is heaven on a stick!? Kelly asked about the origin of the churro and it was told by an audience member that it came from Mexico. ?My husband is Mexican and he never told me about this!? Faith just leaned over and whispered to Kelly, ?That's because he wants to be your heaven on a stick.?

This had the crowd roaring and it was the running joke/comment throughout the rest of the session. [Disney trivia: the introduction of the churro to Disneyland was in 1988 at a food concession called Yumz in Videopolis].

Another question to Kelly Ripa came from a younger audience member, who asked, ?I see you have a tattoo on your ankle. What does that represent?? Kelly replied, ?I got it when I was 19 from a tattoo artist named Snapper? and it's a symbol of my stupidity!?

Of all the Q&A sessions, these two appeared to be most at ease with the guest audience, and made each and every one of them feel as if they were new friends. 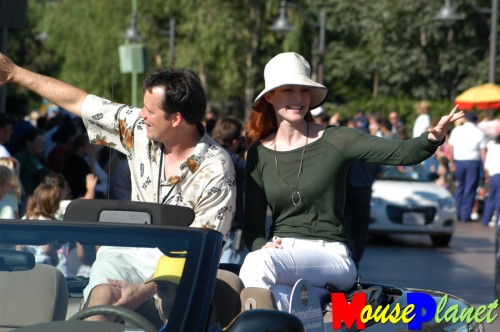 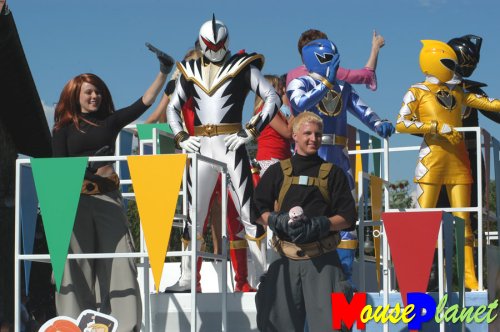 The stars of ABC Kids, including the Power Rangers, wave to the crowd in the Parade of Stars. Photo by Frank Anzalone.