Swim with the Stars 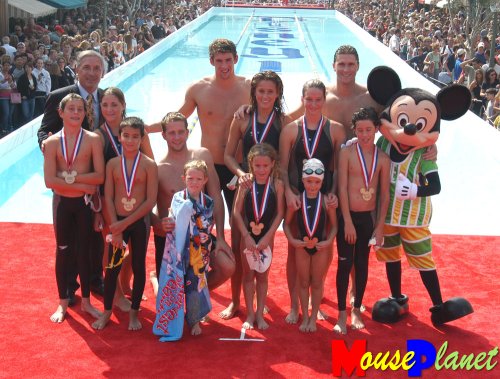 Michael Phelps, Lenny Krayzelburg and Ian Crocker were joined by local swim club champions to participate in this first ever historic “swim meet” this week right Disneyland's Main Street, U.S.A. The Olympians have been traveling, doing special appearances on this tour since they left Athens, and ended their 12-city cross-country tour at the Happiest Place on Earth. 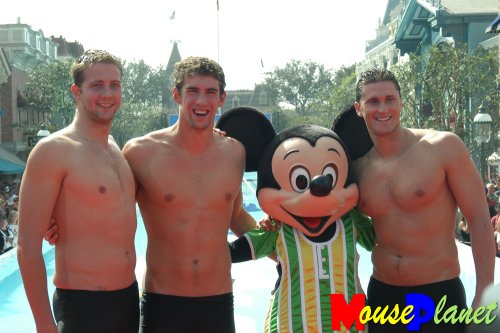 But how in the world could Disneyland put on a real swim meet on Main Street, where there is no water to be found? 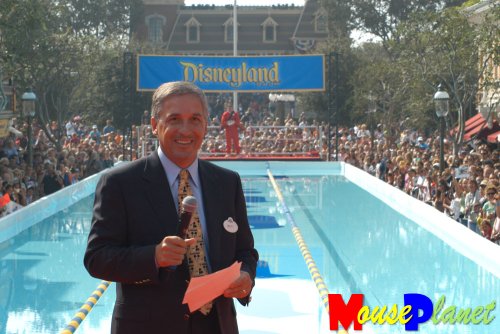 To get ready for this historic event, Disneyland cast members constructed a real swimming pool in just less than 30 hours! This pool measured 164 feet long (50 meters) by 24 feet feet wide (3 swimming lanes) and 3.5 feet deep. These 103,944 gallons of water were heated to a comfortable 80 degrees for the Olympic swimmers and their teams. 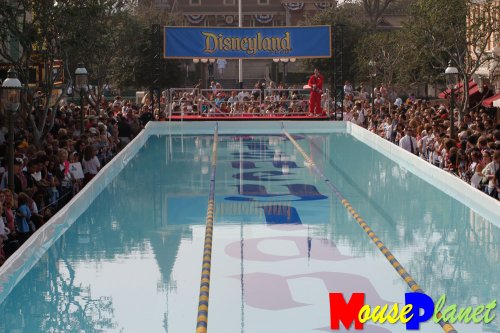 Main Street was packed with park guests lining the sides of this special pool. As the Olympic medalists arrived, the cheering and loud greetings were almost deafening. These men were not only great athletes; they were treated like celebrities and heartthrob hunks. Many in the crowd held up handmade signs with well wishes and pictures—but there were quite a few signs that displayed phones numbers with the invitation, “Michael – Call Me!” 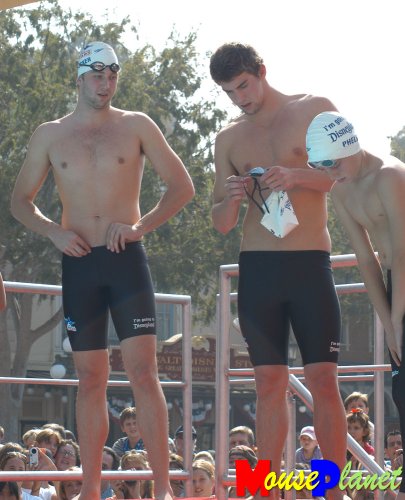 Ian Crocker and Michael Phelps prepare for their leg of the relay. Photo by Frank Anzalone. 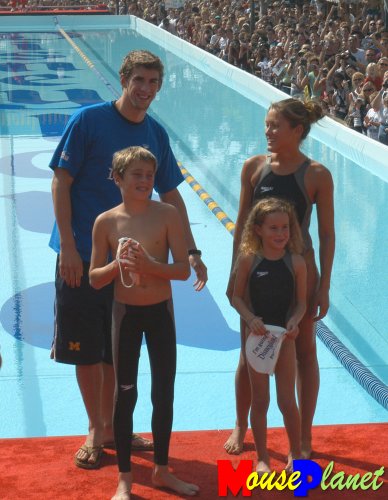 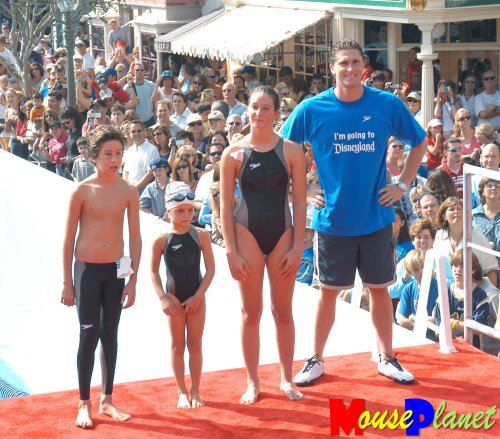 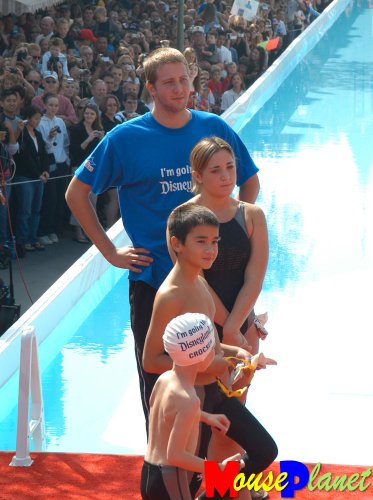 The relay began with the youngest members of the teams. As they started their way down the length of the pool, little 5-year-old Paul Lovely was trying his hardest but not making much headway against the other swimmers. The three Olympic swimmers noticed this, and dove into the pool to swim out to him. In a touching moment perfect for the Happiest Swimming Pool on Earth, the men surrounded Paul and helped him to the end of his relay leg. The audience was really touched to see these big athletes helping the up-and-coming fellow swimmer, and it stole the show! 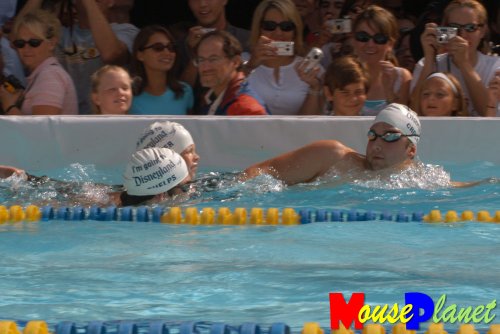 The Olympic swimmers help 5-yr-old participant Paul Lovely with his leg of the relay. Photo by Frank Anzalone. 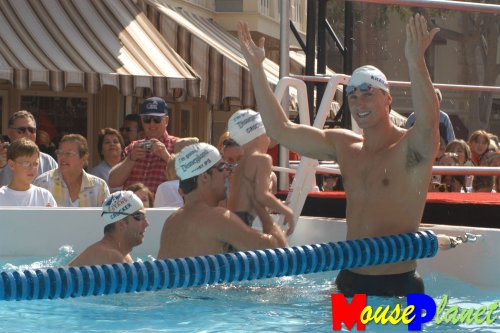 Lenny Krazelburg gestures to the park guests as Ian Crocker and Michael Phelps help 5-yr-old Paul out of the pool. Photo by Frank Anzalone. 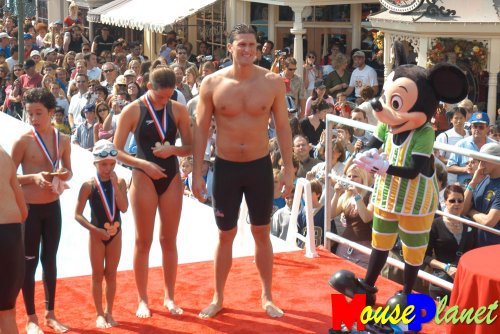 After the friendly competition, Michael, Ian, and Lenny enjoyed the excitement of the rest of day in Calfornia sunshine as they gave personal interviews with the media and signed autographs for the guests. 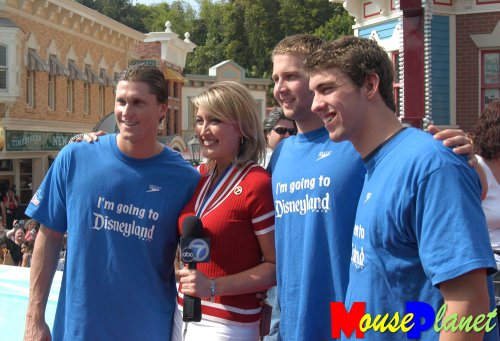 In the middle of all the hoopla, however, Michael Phelps made sure to spend a little quality time with that young swimmer he assisted during the relay. Paul Lovely and Michael sat in a quiet corner of the media stage, as Michael showed Paul the gold Mickey medal, talked to him and gave him words of encouragement. Added to the caring shown earlier in the pool, hopefully the quiet one-to-one encounter with Michael is a moment youth that will remember. 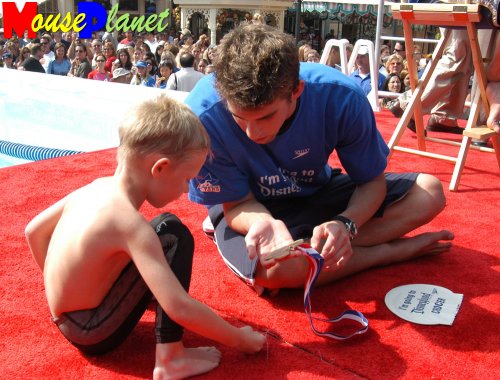 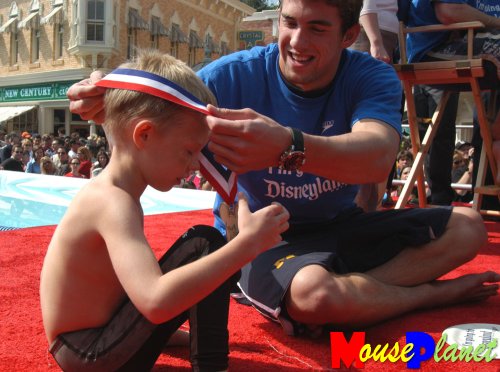 The scope of the logistics of this event for its 45-minute duration was an incredible achievement of logistics. Matt Ouimet (president of Disneyland) was very proud to have this happen at Disneyland as they prepare for the big 50th anniversary next July. 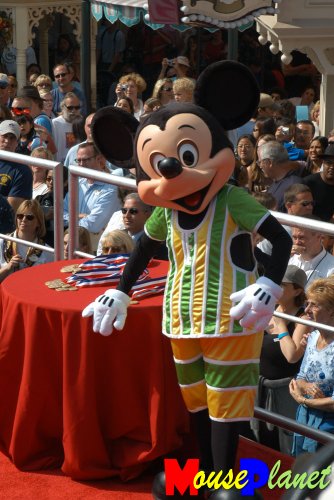 Mickey waits to hand out the gold medals to the swimmers. Photo by Frank Anzalone.