Twice Charmed: An Original Twist on the Cinderella Story, the latest entertainment offering from the Disney Cruise Line, poses the question: “What if Cinderella's wicked stepsisters had another chance at marrying Prince Charming?” That question is answered in this appealing new musical recently premiered on the cruise ship Disney Magic.

Held in the plush 977-seat Walt Disney Theatre on the ship, the musical makes good use of its 19-member cast and limited sets. Although Twice Charmed runs approximately 52 minutes, the action is briskly paced except for a lull during the middle section and a heavy reliance on stage door traps (used as frequent substitutes for scenery changes and special effects).

Overall the story, music and costuming are professionally staged and well directed. Twice Charmed is certainly better than most of the current entertainment offerings at the various Disney theme parks. Of special note are the animated interstitials projected onto a scrim that cleverly moves the story along between scenes.

The book, music and lyrics were provided by the team of Alan Zachary and Michael Weiner. Six new songs were written for the show, plus two songs from the original animated feature, “Bibbidi-Bobbidi-Boo” and “A Dream is a Wish Your Heart Makes,” were reprised for the musical. Zachary and Weiner have a knack for comedic dialogue and it's especially inspired for the auxiliary characters, Franco DiFortunato, the evil Fairy Godfather, and Drizella and Anastasia, the evil stepsisters. There are a few moments, however, where several plot twists in the story are introduced, causing some audience confusion until the character resolves the situation by explaining why he or she acted that way. Zachary and Weiner's credits include songwriting for DisneyToon Studios and Walt Disney TV Animation, plus providing arrangements and music consulting on the Alice in Wonderland DVD, The Fox and the Hound II, The Three Musketeers and for the upcoming release Cinderella III. 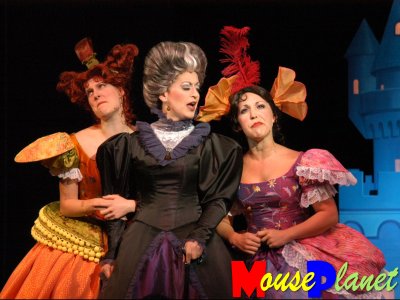 The step-mother and step-sisters. Photo by Adrienne Vincent-Phoenix.

The singers and actors were excellent, with a special nod going to Tyler Murree, Melissa Fleck and Blair Anderson (Franco DiFortunato, Drizella and Anastasia, respectively) stealing the scenes they were in. The mark of good comedic actors is that they find the humorous elements of their character and run with it—these three actors took those roles and wrung every ounce of comedy out of them, making for some very entertaining and fast-paced scenes.

The varied choreography for the show, which featured jazz, tap and ballet segments, was conceived by Karma Camp, including an over-the-top Vegas-style number (“ It's Never Too Late”) introducing the Franco DiFortunato character. Her more recent credits include choreography for Snow White: An Enchanting New Musical at Disneyland, the recent Broadway production of The Graduate and Merrily We Roll Along at the Kennedy Center.

Costuming for Twice Charmed was provided by Helen Huang, a veteran costumer for many major theaters and also a professor and head of the M.F.A. Costume Design program at the University of Maryland. Of special note were the dresses and suits in the finale which were cleverly switched out, in a style reminiscent of the changes in the Disney Magic's Animator's Palate restaurant, where the color scheme changes as the meal progresses.

Sound for the show was adequate, except during the finales of the uptempo songs, where the volume of the backing orchestral tracks was turned up, causing the singers to be drowned out by the orchestra and creating some uncomfortable distortion in the mix. Music production and sound design was provided by Audio By The Bay.

Franco DiFortunato is introduced as the latest Disney Villain. Photo by Adrienne Vincent–Phoenix.

Unfortunately, like other recent Disney offerings, the musical includes the seemingly obligatory themes of self-esteem and that what's on the inside is more important than external beauty. These themes, by themselves, are fine, but the audience is repeatedly exposed to these ideas, both in Cinderella's song “Inside Out” and in Prince Charming's song “Chasing A Dream.”

Additionally, because of the small cast, the staging repeatedly shoehorns Prince Charming and Cinderella inappropriately into scenes in order to provide opportunities for the characters to be part of the finale for many of the scenes. Although a minor quibble, it tended to break up the continuity of the plot.

Despite some shortcomings, which could be easily fixed by a few judicious trims of dialogue and staging and a little less reliance on the use of stage door traps used as substitutes for scenery changes, Twice Charmed is an entertaining and easy way to spend the better part of an hour, especially for fans of the story of Cinderella. 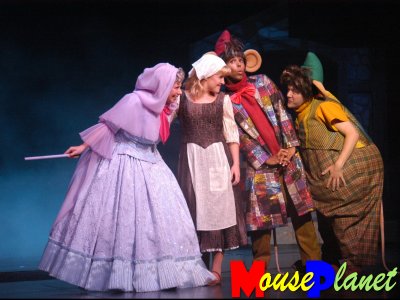 Cinderella getting some help from friends and her fairy godmother. Photo by Adrienne Vincent-Phoenix.

Three top Disney executives discussed the creation of Twice Charmed and provided behind-the-scenes information after a special West Coast performance of the show. Tom McAlpin, Disney Cruise Line president, spoke about the cruise line in general. Anne Hamburger, Executive Vice President of Disney Creative Entertainment and responsible for the creative development and production of all major Disney stage shows, parades and night time spectacles, world-wide, spoke at length about the creation of the show; and Jim Urry, Director of Entertainment for Disney Cruise Line, talked about the show in the context of the cruise line's entertainment offerings.

Urry said that Twice Charmed is the most complex show they have staged to date: the many automation cues, great costumes and they had to go around the world to find the best cast possible, as each member of the cast has to be able to sing, act and dance. 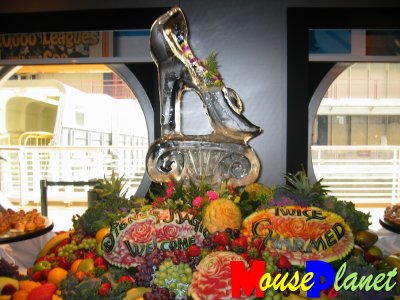 Cinderella's slipper as an ice sculpture. Photo by Sheila Hagen.

According to Urry, the cast members receive special training to learn how to maneuver when the ship starts rocking. The cast is signed to an eight-month contract, with two months of that is spent in Toronto, where they learn not only all of the shows, but also receive extensive training on safety measures. During rough seas, the shows cannot be changed out so they have what are known as “flat shows,” where some of the set pieces are taken out so that none of the cast is put at risk. Fortunately, the ships don't get that much movement, but when there is, Urry said the cast is trained.

Anne Hamburger spoke about how with every new Disney show, she hoped to bring together magical storytelling, with great direction, design and wonderful music. For Twice Charmed, she credited writers Michael Weiner and Alan Zachary, and Joe Calarco, the director for coming up with a show that took a classic age-old tale and wrote original music and changed the story.

Hamburger said it was a fabulous experience to watch Twice Charmed come to life from an initial three-page treatment and one song which Weiner and Zachary created, to what it is today.

According to Hamburger one of the challenges was that three different shows are being performed in the theatre -- they looked at it as a way to do creative things in a new way. One of the ways was to make heavy use of projections since they don't have as much room in back for lots of sets. Hamburger said that she thought the theater on board the ship is equal to an off-Broadway theatre.

Hamburger said family entertainment that appeals to kids should appeal to adults and older people all at the same time; she did not like a lot of children's theatre because it tended to pander to young kids. The classic animated Disney movies, Hamburger said, had an appeal on many different levels. There were certain jokes adults would get, and kids get the adventure and she felt that was true with Twice Charmed. Kids love the mice, Gus and Jaq; boys love Franco and girls love Cinderella. Hamburger added that there is also sophisticated humor when they say “[Cinderella's] a little crazy; she dresses mice in clothes” -- that appeals to a more adult audience.

Hamburger felt the ship's entertainment is a cut above the entertainment offered on many other cruise lines, which is predominantly song and dance reviews. She added that on the Disney Cruise Lines, they add story, which makes it more rewarding because it has a lot more heart.

According to Hamburger, although the ships operate in international waters, the Disney Cruise Line is not bound by contracts with IATSE and Actor's Equity. They do, however, adhere to the guidelines. “You only get talent because they get experience with great people, being in a wonderful show,” she said. “It's important whether one is on a cruise line or a park, is that you treat people well, they're treated with respect and well taken care of.” She felt that for young performers, this is a fantastic performing opportunity—they are in three different shows, they get to see the world and meet new people.

Would Twice Charmed ever be performed on the Disney Wonder? Hamburger said Disney would be having a strategic planning meeting in July to discuss the potential of the show, but that for now, it would be only on the Disney Magic. McAlpin added that traditionally, the two ships were mirrored and had similar production shows, but as the business grows and evolves, they have repeat customers. On the Disney Magic, 35-40 percent of the guests have been on Disney cruises before and they want to see new product.

The review of the show is based on a special performance given on June 11, 2005 aboard the Disney Magic for media, travel professionals and Disney company affiliates. Also in attendance were former DCL President Matt Ouimet (and currently president of Disneyland Resort), Port of Los Angeles officials, Los Angeles City Councilmembers Julie Hahn, Wendy Gruehl and Tony Cardenas, Congresswoman Juanita Millender-McDonald, Golden Ears cast members from Disneyland Resort, and children from local chapters of the Boys and Girls Clubs of America.