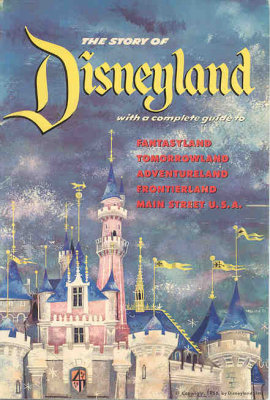 As collectibles go, the guide books for Disneyland have always been a fun and generally affordable option. They offer a window into the past—sometimes our past, and other times a past we like to dream about. Both of Disneyland's original guide books have been reprinted to commemorate the park's 50th anniversary.

The Story of Disneyland (1955) was the park's first guide book, prepared prior to the opening. It contains artwork rather than photographs and was reproduced in a limited edition of 500 for $125 for the merchandise event in July and came in an attractive wooden box (the high price was an odd choice since original copies routinely sell on eBay for far less—$60 or so). Picture Souvenir Book of Disneyland in Natural Color (the full title is a mouthful) was the second guide book produced and the first to contain photographs of the actual rides and attractions. It's both harder to find and more expensive, so Disney Edition's open edition reprint is welcome. 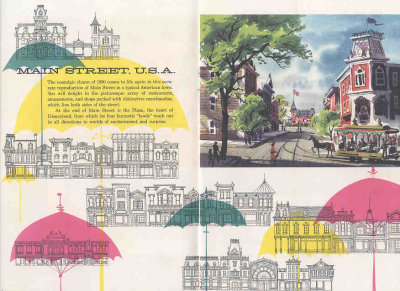 An introduction to Main Street in The Story of Disneyland. © Disney.

The greatest pleasure in looking through old guide books is the ability to see the park in its earlier days. From the color photo on the cover depicting Walt gesturing toward Peter Ellenshaw's concept art (an image from the Disneyland TV show on ABC), to the 34 color photos inside of the park in its opening months, there's a lot of nostalgia to be had for $10.

The guide books in 1955 were smaller than those produced from 1956 onward, and the reprints reflect this—they're smaller than you expect. Disneyland in Natural Color is a 24-page saddle-stitched booklet, 6 by 9 inches, with glossy laminated covers. Considering that it's unlikely the original photographs could be located, Disney Editions has done a startling job in creating this new edition from one of the original printed booklets. The photos are generally clear and the colors surprisingly vivid. 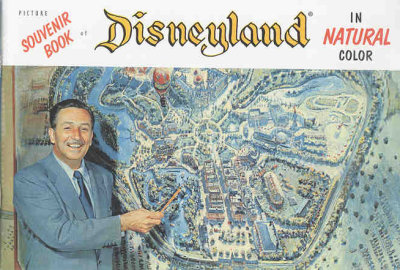 The most surprising thing for me, no matter how many times I see it, is how “young” the vegetation was—the vast expanses of blue sky visible above and around all the buildings give a totally different feeling than the lush green surroundings of the park today. In terms of attractions, so much of the park has changed in every land that many of the photographs reveal a place completely unfamiliar to many of us. On opening day Disneyland was not the crowded place we see now, with shops and attractions squeezed into almost every corner. In 1955 Disneyland reflected only a part of Walt's dream—the part he could manage to scrape together by opening day. It would take many years for Walt to begin to fulfill his vision, and Disneyland in Natural Color is a lovely way to spend a few minutes seeing exactly how he created the framework for what he eventually built into what we think of today as “Walt's Park.”

The book is priced at $9.95 and is available at Disney theme parks. 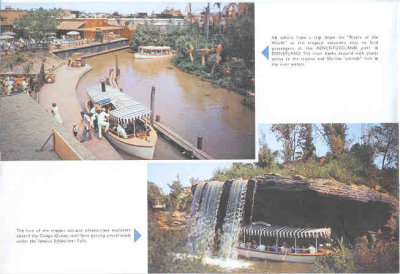 A page dedicated to the Jungle Cruise from Disneyland in Natural Color. © Disney.