The Disneyland “pictorial souvenir” book has a long history, dating all the way back to even before Disneyland opened its turnstiles in 1955 (the first guide, printed before the park opened, featured artwork rather than photographs). Similar pictorial souvenir books were also issued for Walt Disney World since it opened in 1971. They are softcover, starting at 20 pages in 1955 and growing to 128 pages in their latest incarnations (a recent version can be had directly from Disney for only $5 on the Disney Deals section of eBay). Some popular attractions, such as Small World and Pirates of the Caribbean, had their own pictorial souvenirs in the late 1960s. (Alastair Dallas's comprehensive illustrated list of every Disneyland pictorial souvenir book can be found here and it's a great resource.)

Sometime in the 1970s, the smaller pictorial souvenirs were joined by a much larger occasional hardcover. The earliest I have seen is Disneyland, The First Quarter Century, published in 1979. A sister book was published in 1982: Walt Disney World, The First Decade. At 122 and 128 pages respectively, these books are much larger than the less expensive pictorial souvenirs published in those same years, printed on better paper, and give better overall views of the parks. Walt Disney's presence is significant—he is often pictured on various attractions and seen escorting celebrities around Disneyland. There is more of a historical side to the text in these books, with photos of behind-the-scenes work on attractions such as Big Thunder Mountain Railroad and The Country Bear Jamboree.

As time has passed, fewer photos of Walt appear in the books, there is less historical information, the photos of celebrities have vanished, and the books now consist almost entirely of enormous photos juxtaposed with tiny ones, lots of white space, and minimal text.

The latest in this series is Around the World with Disney by Kevin Markey. Published earlier this year to coincide with Disneyland's 50th Anniversary, the book is the first in this line of souvenir pictorials to deal with all the Disney theme parks around the world except Hong Kong Disneyland (though if they had waited just another six months it could have been included as well). Despite the Around the World… theme, the focus is mostly on Walt Disney World as a peek at the index reveals: 86 pages have photos of Walt Disney World attractions; 25 pages have photos of Disneyland attractions; 17 have photos of Disney's California Adventure attractions; 18 have photos of “Disneyland Resort Paris” attractions (that includes both Disneyland Paris and Walt Disney Studios Paris); 12 have photos of Tokyo Disneyland attractions; 9 have photos of Tokyo DisneySea attractions. Considering the beauty of the parks in Paris and Tokyo, it's shameful they're under represented at the expense of the American parks. What's the point of the book if not to show readers images from parks around the world they haven't seen ad nauseum? No parks photograph better than Disneyland Paris and Tokyo DisneySea, but instead we are treated to Stitch's Great Escape, TriceraTop Spin, Primeval Whirl, at the expense of things like DisneySea's Mysterious Island, which is perhaps the most immersive area in any Disney park in the world. 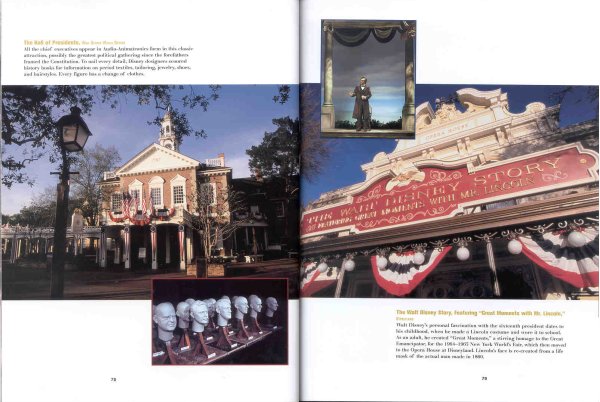 Interestingly, the author also includes photos of attractions that I have not seen operating for many years: Les Pirouettes du Vieus Moulin at Disneyland Paris (this is a tiny ferris wheel where kids sit in wooden buckets modeled after The Old Windmill), and the Jolly Trolley at Disneyland. What's the point?

Well, here's the point: Around the World with Disney is for the casual Disney fan. It's essentially a picture book that tourists will buy as a memento of their trip and it must be judged for what it is.

To give you an idea of how the book lays out, here are notes on some of the chapters.

• “Castles of Dreams” focuses on the castles in the different parks.

• “Journeys of Adventure” deals with the various incarnations of The Jungle Cruise, the Indiana Jones Adventure, The Matterhorn (with a nice clean shot of the Yeti), and the oft-seen concept art for Expedition Everest. 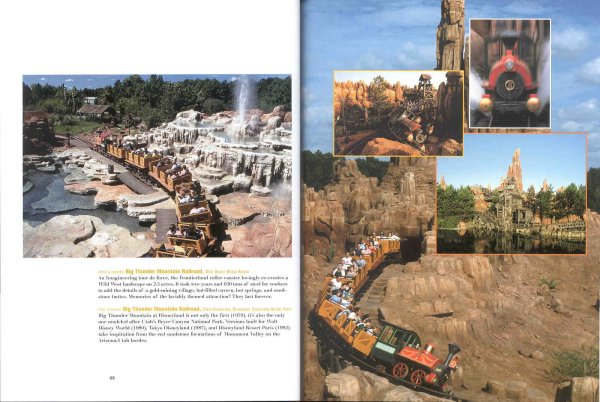 • “Riding the Rails” is illustrated with photos of trains, monorails, rides involving trains (Big Thunder Mountain Railroad, Heimlich's Chew-Chew Train, Casey, Jr., and the missing-in-action Jolly Trolley). Since I assume the photographs which appear in this book were not specifically shot for it, but are from the Disney archives, many of the shots fail to show what's different about the various versions of the rides. There are shots of Big Thunder Mountain Railroad from all four parks, but only the photo of the Walt Disney World version looks any different from the others. What is really needed is an aerial photo of the ride in Disneyland Paris where it appears on an island in the middle of the river—something completely unique to that park.

• “Things that Go Bump in the Night” bumps into the obvious, The Haunted Mansions and Phantom Manor. The Disneyland original gets a photo the size of a large postage stamp, but there's a dandy photo of the figure in Phantom Manor whose head was originally the prototype for the Hatbox Ghost. Tower of Terror appears, as does Pirates of the Caribbean (it would have been nice to see some photos of the things that make the Disneyland Paris version of Pirates unique, but no such luck). 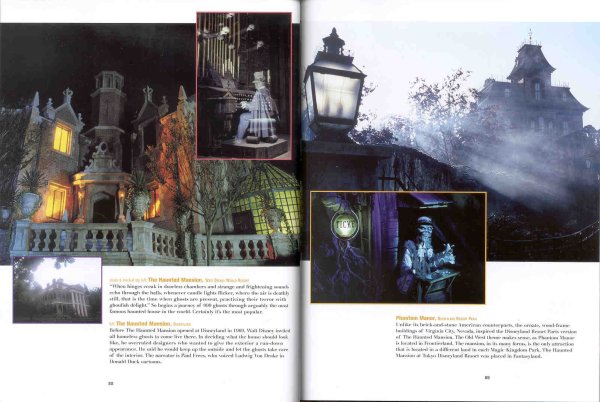 • “Water, Water, Everywhere” hits Splash Mountain, the various boats that ply the rivers of all four parks—again, the boat in Walt Disney World, The Liberty Belle, gets the full-page photo while the boats in the other parks are given short shrift on the facing page. The pitiful Kali River Rapids, another ride from Walt Disney World, is given a full page, as is Grizzly River Run on the facing page. Looking at both of these rides on facing pages you are drawn to the photos for Kali River Rapids because it's a better shot—too bad that the photo of Grizzly River Run utterly fails to communicate that this is one of the best and longest white water raft rides in the United States. Then, at long last, Tokyo DisneySea gets two facing pages of photos of the Venetian Gondolas in the canals outside the Hotel Miracosta, along with photos of Mermaid Lagoon and Port Discovery, two other lands in the park. The chapter concludes with more of Walt Disney World: Typhoon Lagoon and Blizzard Beach.

• “Built for Speed” hits the Autopia/Tomorrowland Indy Speedway/Grand Circuit Raceway in three parks. While Walt Disney World gets two photos, and Disneyland gets one, Tokyo Disneyland rates only a tiny photo of the attraction's sign. California Screamin and Rock 'N Roller Coaster each get a page, along with Mr. Toad's Wild Ride and Roger Rabbit's Cartoon Spin both from Disneyland. The next two pages really gave me a chuckle: the idea of including a photo of Tuck and Roll's Drive 'Em Buggies in a chapter called “Built for Speed” is too ironic to contemplate, particularly since the photo shows the inch-along-bumper cars completely empty. The photo for Mulholland Madness shows, most prominently, the head of Dinosaur Jack, a shop in the shape of a pink dino—you can barely see the subject of the photo in the background!

There are more chapters, but they're presented pretty much along the same lines. With the focus so heavily on Walt Disney World, photos I've seen many times before, and text that sounds like it was written for a series of press releases, Around the World with Disney is really directed toward those who've visited Walt Disney World and are looking for a superficial souvenir of their visit. It would also really make a great source book for someone looking for photos for a decoupage project. Those with a genuine interest in a pictorial souvenir book that shows you things you've never seen before, presented in a new way, can read my review next week of Disneyland Then, Now, and Forever by Bruce Gordon and Tim O'Day—now there's a book worth buying!