Cinderella at the El Cap

On September 15, 2005, a red-carpet premiere honored the release of the two-disc Platinum Edition DVD set of the animated Disney film, Cinderella, at the El Capitan Theatre in Hollywood, California. A culmination of months of effort, the DVD represents the process of digitizing and restoring the original 35mm nitrate black-and-white negative of the film, and is available for sale on October 4, 2005.

The evening started out with celebrities from the film being escorted down a red carpet at the El Capitan Theatre. 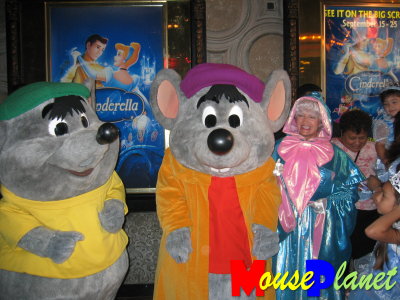 After a few initial remarks, Ross King, weather and entertainment reporter for local television station KTLA, introduced the members of the discussion panel:

• Ilene Woods-Shaughnessy – radio star and the original voice for Cinderella

• Stephen Poehlein – director of mastering and restoration at Disney 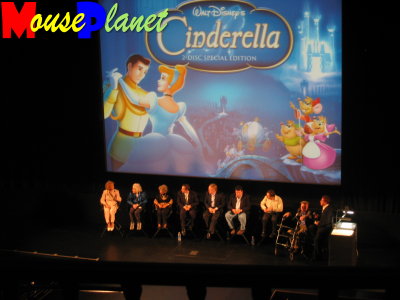 The discussion began with King asking Ilene Woods-Shaughnessy how she came to be the original voice of Cinderella. She recounted that at the time she was starring in her own radio show and was approached by songwriters Mack David and Jerry Livingston to record a demo, as a favor, of some songs they were pitching for a movie. She didn't know that it was for Disney.

She recorded “A Dream Is A Wish Your Heart Makes”, “Bibbidi Bobbidi Boo” and “So This Is Love”, not expecting to hear from them again. Two days later, she got a call from the Disney studios saying Walt Disney wanted to see her. He talked to her and offered her the role. She was dumbfounded but delighted to do the role. Woods said that from then on, she always does favors for friends. 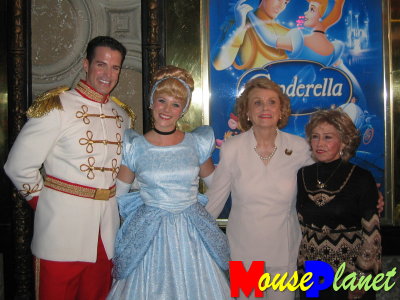 Woods added that she worked off and on for two years on the film. The crew worked long hours in the studio, trying various ways to record each scene. At the end of the day, Disney would come in and listen, then give his opinion on how the scene should be done. The scene would then be re-recorded and the first take would be right. She remarked to Disney that he should come into the studio earlier in the day—they'd save a lot of money for the company.

Woods said that Disney came up with the idea of recording her voice in layers for the song “Oh Sing Sweet Nightingale” so that it would sound like a choir. He had her record the various parts separately. Afterwards, Disney jokingly said that for all those years he had been paying the Andrew Sisters three salaries when he could've just paid one to Woods.

She said that Walt's most favorite scene of all his animated movies was from Cinderella when she got her dress from the Fairy Godmother.

King then asked Foray about her participation as the voice of Lucifer the cat. She replied that she had been doing all the “wicked” characters for years and although she had no dialogue in the movie, she was still working for Walt Disney. The part of Lucifer catapulted her into the animation industry; she voiced Witch Hazel, the squaw in Peter Pan, and was even a mermaid in that movie, too. 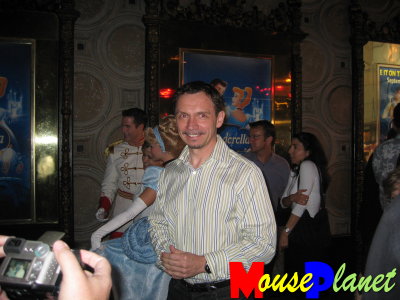 A casting agent asked her if she'd like to work at Disney, and she said she'd love to work there again. He told her to bring a bathing suit for Peter Pan, and Foray thought "what does a dirty old man like that want with a bathing suit? Was this a casting couch?"

So she told of how she and other actresses were filmed (for rotoscoping) as mermaids for the film. They spent all day long with their legs bound together crawling up and down like mermaids.

Lucille Bliss also recounted her association with Disney. She was originally cast as Charlie McCarthy's love interest on The Edger Bergen/Charlie McCarthy Show radio show in San Francisco, but was told that the show was being cancelled and replaced by The Bickersons radio show starring Don Ameche and Frances Langford. The director of Bergen's was in Hollywood and called her up and told her to come see him some time. 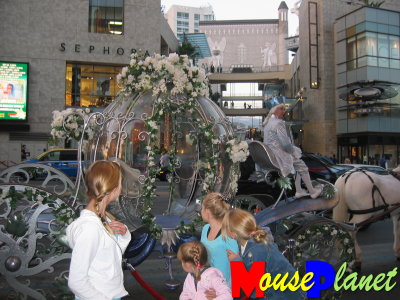 Onlookers look at Cinderella's glass carriage on Hollywood Boulevard, used to transport the princess to the theater. Photo by Sheila Hagen.

So Bliss borrowed $25 each from three different people and went to Hollywood. When she arrived, she told the cab driver she had $7.50 for a cab ride to the Disney studios for the Cinderella audition. Little did she know that the fare was $3 so the cab driver drove her around in circles; she was 30 minutes late for the audition and told it was too late. The executives changed their minds and had her ad lib dialogue for the different characters for 15 minutes. Six months later she was chosen to be the voice of Anastasia.

Bliss said that years later she had picked up a Disney book on 50 years of celebration and in the section on Cinderella, it stated that she was chosen by Walt Disney himself to be Anastasia. She never knew that and cried when she found that out.

Next up was Disney animator Andreas Deja, who talked briefly of studying the subtle drawings done for Cinderella and the other animated films on DVD. He also did an impromptu interview of Ollie Johnston. Johnston, extremely frail and using a walker, was prompted by Deja to tell about his techniques for drawing the stepsisters. Johnston said that he drew from his heart and that you had to feel the emotions of the characters. Johnston joked that for live action reference, he studied the pretty girls—and not the ugly ones—for inspiration on the stepsisters.

After he finished talking with Johnston, Deja used an overhead projector to display various original cels, rough sketches, and photos from Cinderella. He showed how the various Disney artists worked on each character from the film and how the characters evolved. He pointed out how uncomplicated and economical the lines of the drawings were in order to only suggest the movement and costuming of each character.

Dave Bossert was then called upon to discuss the technical aspects of restoring Cinderella. He said that their basic philosophy during the restoration process was, “What was the artistic intent?”

Using the original nitrate negative, they did full 4,000KB-resolution scans of every frame, which took six to seven months to complete. In the process, they removed 10 million pieces of dirt—it was a labor of love. Disney and DTS took a great deal of care out of respect for the artwork in order to bring the film back to pristine condition.

Steve Poehlein then expanded on the process by explaining that the digital restoration of Cinderella was different from previous ones because they had the ability to make the 1950 film better than it originally was created. They obtained the black and white negative from the Library of Congress and shot it three times using color filters.

Poehlein demonstrated the final product by showing the Fairy Godmother scene in before-and-after clips, indicating how much brighter and crisper the colors are in the restored version.

John Lowry was then called upon to talk further about the digital restoration process. The film was not restored to its original state at the time of release; instead the original artwork was used as a guideline to make a pristine restoration without being limited by the original image capture mechanics available back then.

King asked Woods to give her final thoughts for the evening. She said that it was a true thrill to work with Disney, and that Marc Davis (animator for the character of Cinderella) was a gent and a dear man.

At the end of the panel discussion, Woods thanked the audience for attending and said, "A wish is a dream your heart makes so I hope all your dreams come true."

Once the panelists left the stage, the curtain opened up and Cinderella was shown on the El Capitan's large digital movie screen. Although much of the audience consisted of children, they hardly made sound while the film played, showing that an older film, if made with care and love by talented artists, can still enchant children over 50 years later.