Disneyland: Now, Then, and Forever

Last week, as a preface to reviewing the new book Around the World with Disney, I gave a very brief history of the Disneyland “pictorial souvenir” books that have come out since the park opened in 1955. These small softcover books were joined in 1979 by the large hardcover Disneyland, The First Quarter Century. Several other versions of these hardcover souvenir pictorials have been produced in the ensuing 25 years, but none compare to the latest, Disneyland: Then, Now, and Forever, published in conjunction with the park's 50th anniversary.

In fact, very few Disney theme-park related books have given me as much pleasure and I can tell you why in two words: Bruce Gordon. I believe it was Jim Hill who recently noted that Bruce Gordon literally wrote the book on Disneyland when he ghosted Disneyland Inside Story for Randy Bright in 1987. This book, sadly out of print, set a level of excellence that was only matched by another of Gordon's books, Disneyland: The Nickel Tour, written with fellow Imagineer the late David Mumford. It, too, is out of print.

I'm a relative late-comer to the pleasures of Disneyland. Having grown up on the east coast, until recently Walt Disney World has been where I've spent most of my “Disney” time. In the past several years, however, my appreciation both for Walt Disney and Disneyland itself (versus Walt Disney World) has grown immensely. I want to know more about how Disneyland came to be, how Walt's ideas evolved and finally came to fruition, how the park looked on opening day, and how it's changed since then. I want to know what long-gone attractions looked like, where they were located, and on and on. A million questions. Bruce Gordon and Tim O'Day have given more me answers than I could have hoped for. Disneyland: Then, Now, and Forever begins, as it should, with Walt Disney, and “The Who, What, and 'Walt' of Disneyland:” “I think what I want Disneyland to be most of all is a happy place—a place where adults and children can experience together some of the wonders of life, of adventure, and feel better because of it,” Disney once said, and this book tells the tale.

The chapters are “Dreams,” “Traditions,” “Surprises,” “Adventure,” “Fun,” “Thrills,” “Music,” “Secrets,” “Enchantment,” and “Forever Dreaming.” Each chapter is subdivided into mostly two-page spreads devoted to a single aspect of the chapter's theme. The “Dreams” chapter begins, for example (after a brief intro about Walt and Roy), with “Walt's Dream of Disneyland” and shows Harper Goff's 1951 rendering of what the original park would have looked like had it been built across the street from the Disney Studios as originally planned. While we've seen this piece reproduced before, we've never seen what's on the next page, where the authors have skewed this piece into perspective in and placed it on a color photograph of the Studio so you can see exactly how the original park would have looked. 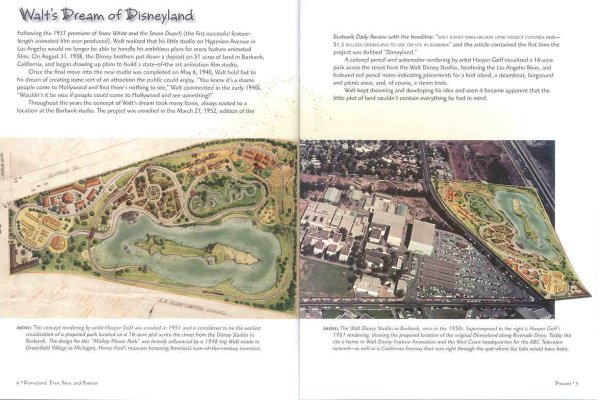 The chapter continues with “Dreaming of the Past,” and the authors display a selection of Sam McKim and Harper Goff concept art for Main Street. It's surprising how little the sketches look like a theme park, and how much they look like a real street in a real town. Then we're treated to “Dreaming of Fantasy” and Bruce Bushman's evocative and whimsical concept art for the Fantasyland attractions. The chapter continues with pages devoted to concept sketches for the other original lands.

Then we come to the first instance of one of my favorite things about this book: “What was there before… .” In this case, it's what was there before Disneyland, and we get photos of the orange groves both before and after the trees have been removed, with the major lands identified, providing a clear idea of the park's orientation. This is followed by pages of photographs showing the park under construction—and these aren't the same photos we've seen reproduced dozens of times before. Many are fresh and provide a new perspective. Of course the chapter concludes with “A Dream Comes True: Opening Day,” with a never-before published panoramic view of Town Square.

“Traditions,” the second chapter, begins with “The Traditions of Main Street” and covers—after an overview—The Main Street Opera House, with rare photos of its original exhibit, the sets from the 1961 film Babes in Toyland, and photos of two incarnations of Mr. Lincoln. The Candlelight Procession and flag retreat ceremony are also covered. The next two pages reveal “The Tradition of Costumes” with photographs of cast member costumes from the late 1950s to today—some rare pieces here. “A Tradition of Ticket Books” is next, with large reproductions that allow my middle-aged eyes to actually read the details on the tickets. “A Tradition of Memories” follows, and here we're shown over a half dozen pictorial souvenir booklets and postcards. The chapter concludes with a “Tradition of Castles.”

The highlight of the next chapter “Surprises” is a two-page spread on The Mickey Mouse Club Circus, one of Walt's few genuine fiascos—it lasted only six weeks. Not only are we treated to rare color photos, but we also get a reproduction of the ticket and, best of all, the broadside advertising the circus. 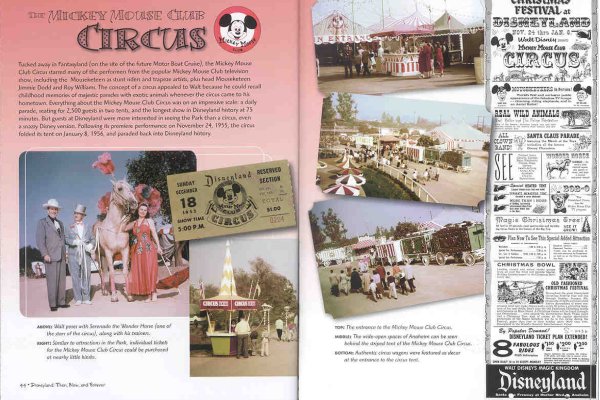 “Adventure,” the next chapter, opens with reproductions of the original silk-screened attraction posters that will continue to appear throughout the book. Here we're treated to pages of color photos of Tomorrowland in 1956, followed by Tomorrowland in 1967 (great construction shots), and finally Tomorrowland today. Then it's off to Adventureland and the Jungle Cruise in the early years, and a photo of the long-forgotten Safari Shooting Gallery (which, we're told, used real pellets, requiring that it be repainted every night!). A real eye opener are the photos of the Swiss Family Treehouse, both under construction and with the original bright red vinyl leaves that it bore upon opening in 1962. We mosey along to Frontierland next where, with the subtitle “Then and Now” we are treated to photos of the original 1955 Casa de Fritos (where the Riverbelle Terrace is today), as well as a shot of the Frito Kid—a glorified vending machine! If you love Disneyland you've got to love this. More photos of the Stage Coaches and Conestoga Wagons, and a shot of the scrubby patch of land in the middle of the Rivers of America in 1955 that would become Tom Sawyer Island later on. It just gets better—next up is “Frontier Adventure on Big Thunder,” which is naturally about Big Thunder Mountain Railroad. Turn the page and you'll find “What was there before Big Thunder?” Nature's Wonderland is the answer, and for those of us who never had the opportunity to ride the Mine Train, here we are among the beavers and bears with spectacular overhead and panoramic shots of the attraction. Turn the page and the question, “So, what was there before Nature's Wonderland,” will be answered with “Rainbow Mountain,” the original 1956 attraction on that spot of land, here shown with an enormous color photograph and a lovely piece of concept art by Claude Coats of Rainbow Caverns. But, as Jolson said, you ain't seen nothin yet! So turn the page to dig even deeper into Disneyland's past and discover, “Well, then, what was there before Rainbow Mountain?” “Trails!” is the answer. With Conestoga Wagons, Stage Coaches, and Pack Mules hauling guests around this dusty back end of Disneyland, it really looks more like a Dude Ranch than a theme park!

“Fun”—I'm havin' it already, and we're just getting to the chapter so titled. “Your day made special—Disneyland Style!” And here the authors tell you why, starting with “The Fun of Fantasyland,” with a big old photo of the early Fantasyland—it's so startlingly different since it was redone in 1983. Photos take you step by step through the construction of Sleeping Beauty Castle. And now we're off on a tour of the Fantasyland dark rides, with “Then and Now” featurettes on Snow White's Adventures, Peter Pan's Flight, Mr. Toad's Wild Ride, the Mickey Mouse Club Theater (now Pinocchio's Daring Journey), Captain Hook's Pirate Ship and Skull Rock Cove, and Storybook Land (including a shot of the utterly barren “Canal Boats of the World” attraction consisting of dirt and grass before they managed to get the wee houses into position). “Fun with the Future” shows us extinct attractions from Tomorrowland, including the Hall of Aluminum , The Dairy Bar, and The Color Gallery. Great to see… glad I get to ride on Star Tours, Space Mountain, and Buzz Lightyear's Astro Blasters instead! “Fun with Plastic” means fun with The House of the Future, the Hall of Chemistry, and the Phantom Boats (seen riding by what looks more like a public park in 1955-56 than the Disneyland we know). At the end of the chapter our fun is shifted into high gear with “The Fun of Critter Country.” After Pooh gets his due, the next page asks “What was there before Critter Country?” Bear Country is the growled answer. On the next page the question is posed, “Well then, what was there before Bear Country?” Indian Village is the smoke-signaled answer, with photographs of a long-forgotten era in Disneyland history.

We're only halfway through the book and I could babble on for another 1,000 words but what's the point? If you love Disneyland then you really need to buy this book…

… for the photo on p.116 of Satellite View of America.

… for the photo on p.112 of poor little Holiday Hill before the Matterhorn rose in its place.

… for the concept art on p.123 of the original Alice in Wonderland ride.

… for the photos on p.147 of the Chicken Plantation restaurant torn down to make room for Pirates of the Caribbean, and of the immense hole in the ground dug for the Pirates in 1961 (!) when it was planned as a walk-through attraction.

… for the photos on pp.150 and 151 of Holidayland, long “lost,” which stood on the spot where pirates and ghosts now roam.

… for everything from p.156 on, detailing so many unbuilt attractions and areas, illustrated through rare concept art and photos of models. 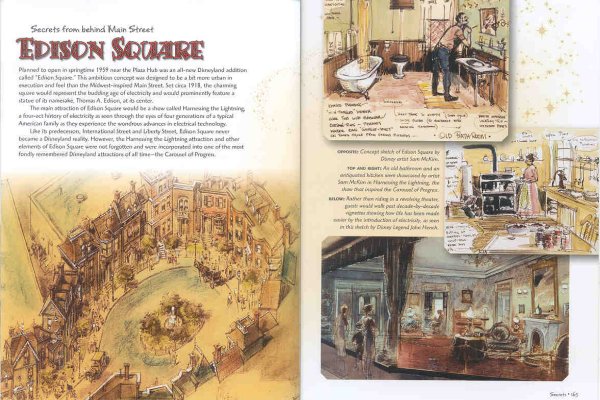 Well, I think you get the picture. One of the things that make this book fascinating is that so many of the photographs from the park's early years are in color, imparting a vivid quality to the images lacking from earlier books. And the text is smart, too, with enough facts to make you feel like the authors know their subject and aren't just spouting public relations drivel. With a fantastic book like this, I wish my review could have a happy ending. But Bruce Gordon—responsible not only for this book, Disneyland Inside Story, and Disneyland: The Nickel Tour, and for so many great shows and attractions at the Disney theme parks—was fired this summer as the Walt Disney Company continues to quietly gut Walt Disney Imagineering during the celebration of Disneyland's 50th Anniversary. It's ironic that Disneyland: Then, Now, and Forever celebrates the work of Walt Disney and his Imagineers during this anniversary year because they would probably be forced out of the company as it exists today. Let's be glad the book exists as a testament to their work.