Many people have asked where the books I've reviewed are available. Disney marketing works in mysterious ways. While some books like The Disney Keepsakes are available on Amazon.com and in your local bookshop, others, like Disneyland: Then, Now, and Forever (reviewed last week) and this week's The Art of Disneyland, are only available at the theme parks and through Disney DelivEars (800-362-4533—and a very jolly bunch of operators they are, too). Around the World with Disney, reviewed two weeks ago, is available from Walt Disney World Merchandise Guest Services (407-363-6200). And while we're doling out handy phone numbers, here's a hot one: Fantasmic Balcony Reservations (714-781-4400).

Now back to the subject at hand: None of the books are available online from DisneyShopping.com (which was DisneyDirect.com until it changed without notice a few weeks ago). MouseShoppe also sells these theme-park exclusive books, albeit at a slight markup to pay for their time and trouble. I highly recommend their service—they've gotten too much of my money already! Click here to purchase Disneyland: Then, Now, and Forever and/or The Art of Disneyland.

Before we get to the review, and while I'm dealing with some reader comments, a little birdie whispered in my ear that I really didn't give Tim O'Day enough credit for Disneyland: Then, Now, and Forever, reviewed last week. Looking back on my review, I can see that Bruce Gordon's name is given more emphasis—perhaps it's because of my enthusiasm for his earlier books. I've had the pleasure of watching Tim O'Day moderate numerous panels at Disneyland merchandise events—he sure knows his Disney history. Just to clarify, then, Bruce and Tim worked equally as partners on the book, with Tim writing all the text, Bruce doing the design, and both choosing the photographs and deciding on the overall format. 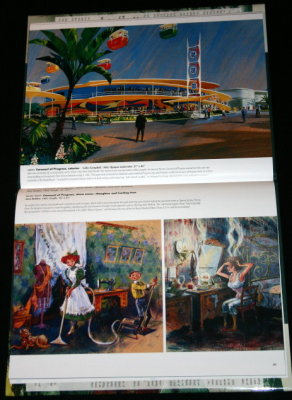 Now, to The Art of Disneyland. Author Jeff Kurtti and designer Bruce Gordon have put together a dream book for fans of the concept art produced over the last 50 years by what is now known as Walt Disney Imagineering. The book is a big 10.5 x 13.25 inches, enabling the reproduction of the artwork to be large enough so that you can see the details.

They get it perfect right out of the gate: The dustjacket is the hand-colored version of Herb Ryman's 1953 “weekend” concept art of Disneyland that Walt took to the bankers for financing. When you open the cover, Sam McKim's 1957 park map (the first to be sold) covers both endsheets—and the rear endsheets bookend everything with Nina Rae Vaughan's 2000 park map.

The first 13 pages are printed in the normal vertical (or “portrait”) format. They include an introduction from Marty Sklar, “The Artist as Storyteller,” in which he explains the vision of the book, “The collection in this one-of-a-kind book celebrates the art that led to the creation of magic realms of fantasy and adventure, yesterday and tomorrow. And for the first time in one joyous expression, it celebrates the great talents inspired by Walt Disney during his lifetime and beyond, to imagine worlds and wonders and dreams that would become reality one day in 1955.” Author Jeff Kurtti details the evolution of Disneyland in “A Magical Little Park” and neatly encapsulates a remarkable amount of detail into a page and a quarter of text. He continues his concise insights through the book in the captions for the artwork.

Next we get three two-page spreads, each featuring an iconic view of the park: the first is, again, the Ryman drawing from 1953 (hand-colored version), the second is the Peter Ellenshaw painting with which Walt introduced Disneyland to America on the Disneyland TV show on ABC, and the third is the Ellenshaw painting again, this time in its “night time” version.

Then, very oddly, the book switches orientations and the next 124 pages are printed in a horizontal (“landscape”) format, which requires you to turn the book and lift the cover like you're opening the hood of your car. It is also at this point that the dustjacket pops off because the flaps are too short.

That inconvenience aside, it's time for the trove of treasures. The remainder of the book consists of wonderfully large reproductions of concept art, starting with Main Street and proceeding clockwise around the park until you end up in Tomorrowland.

The “Principal Artists” (as they are identified in a brief section of biographies at the rear) are, in alphabetical order: Ken Anderson, Mary Blair, Marc Davis, Harper Goff, John Hench, Sam McKim, Dorothea Redmond, and Herb Ryman (whose name is missing from the subhead above his section). With the exception of Redmond, all are now deceased. It's odd to see that neither Claude Coats nor Collin Campbell are listed, considering that the number of pieces of their concept art which appear in the book outnumber those by Mary Blair, for example.

The story of how Walt Disney used artists plucked from his film studio to conceptualize his theme park, rather than architects, has been told many times (and is retold at the beginning of this book, too). Looking at this marvelous concept art, you can really see where the film-making sensibilities of Walt Disney's chosen artists played such a huge part in the mise-en-scene of the modern theme park. Every single one of the principal artists worked in film design before Walt brought them the challenge of translating the alternate realities that people saw on film into actual “lands” and buildings that could be entered—as if walking into a film. The conceptual art is vivid and evocative. It makes the unreal real and draws you in, inviting you to participate in the fantasy world it creates.

Chief among these are Herb Ryman, Sam McKim, Dorothea Redmond, Bruce Bushman, and Harper Goff. Ryman's almost 20 paintings, often rendered with impressionistic bold brushstrokes, immortalize him as one of the chief architects of the park. Sam McKim's 16 pieces reveal a versatility far greater than is usually recognized (he is more often thought of as the artist behind the Disneyland wall maps), and his character pieces for the Carousel of Progress continue to enchant. Both Goff and Redmond are represented by only a half-dozen pieces in the book, but the feeling in them is instantly recognizable to anyone who's been to some of the quieter areas of Disneyland. Bruce Bushman's five pieces invoke the feeling of Fantasyland in an instant.

Among the other artists represented, the 1957 pieces for the Rivers of America by Art Riley are enchanting, as are X. Atencio's Brear Frog for Splash Mountain and his mind-bending phantasma for Adventure Thru Inner Space. Claude Coats's Grand Ballroom master scene for the Haunted Mansion gets to the soul of the place in an instant, while Dan Gouzee's evocation of the exterior of Splash Mountain conveys the kinetic excitement of the ride. There are wonderful pieces, both serene and exciting, by Collin Campbell for Splash Mountain, and his Tiki Birds are full of life. And could anything be more magical than Eyvind Earle's scene for the Sleeping Beauty Walk-Through in the castle? Or more sinister than Ken Anderson's drawing of the Old Hag about to nudge a rock off a cliff in Snow White's Scary Adventures?

In the area of character, Marc Davis has always been the master storyteller, and the dozens of drawings for Nature's Wonderland, the Jungle Cruise, the Enchanted Tiki Room, Pirates of the Caribbean, Haunted Mansion, America Sings, Country Bear Jamboree—well, it's obvious how much he contributed to the attractions because we simply can't imagine any of them without his work.

Just like almost everyone's favorite book about the park, Disneyland: The Nickel Tour, Jeff Kurtti and Bruce Gordon's The Art of Disneyland takes you on a trip through the happiest place on earth through a medium other than a simple guidebook. And it's an exciting and educational journey.

Everyone's first reaction upon seeing The Art of Disneyland is how nice it is to finally have a book with large reproductions of so much original Disneyland art ? then they look at the price and most folks put it down. It certainly wouldn't be unreasonable for Disney Editions to publish a lavish coffee-table-sized art book of Imagineering concept art, but when I compare it to the coffee-table art books at my local bookstore, where $75 buys you an enormous book of about 300 pages, The Art of Disneyland at 130 pages seems skimpy by comparison.

While the book is oversized, enabling the reproductions to be nice and big, it's cheaply put together. I can't recall the last time I saw a book for this price that didn't have cloth covering its binders boards—The Art of Disneyland has inexpensive paper. The book is cheaply bound by a process called Notch-Adhesive Binding, rather than sewn as most quality art books at this price are. There are no headbands. The flaps on the dustjacket are too short, and they keep curling away so the jacket falls off the book. Regarding the way in which you must view the bulk of the book, by turning it sideways ? it's simply awkward. This problem was solved more than 100 years ago: you can print a book as a “short-side bind” (as we publishers like to call it). In other words, you turn the book sideways and bind the short end. It costs more to do this, and the book doesn't fit as easily on many shelves, but when you print all the images in a book sideways, you really do need to bind the book to match.

Putting aside those issues, the interior reproductions are big, bright, and well printed on good paper. And of course there's no questioning the content: it's a thrill to see all of these great paintings and drawings by the masters of imagination. The Art of Disneyland is a triumph.