This feature limits interest in The Imagineering Field Guide to the Magic Kingdom at Walt Disney World (link) to the casual reader and, taken on those terms, it's lots of fun. Unlike, say, The Art of Disneyland, which is designed and priced so it will appeal to only the most avid Disney nuts (I happily raise my hand high for inclusion), The Imagineering Field Guide is designed and priced (at $10) for the masses.

A bit of information about the background of the book appeared on the Web site Tellnotales.com in an interview with Imagineer Jason Surrell:

TellNoTales: What contributions did you make to the recently released Imagineering Field Guide to the Magic Kingdom at Walt Disney World? 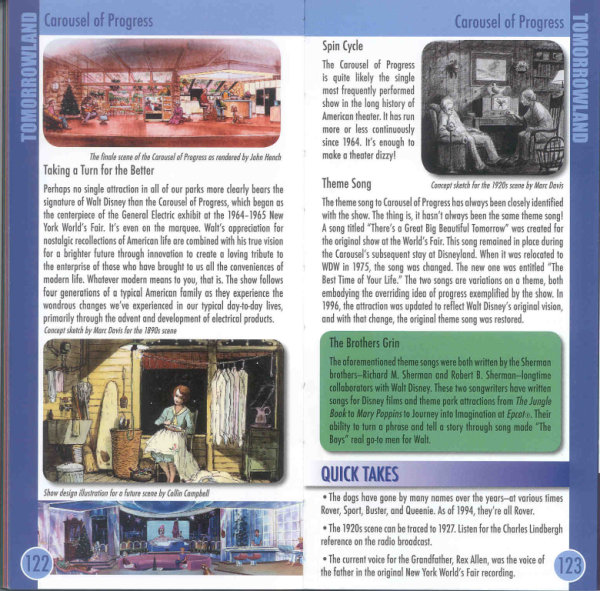 Jason Surrell: The author, Alex Wright, came to me with the idea, thinking that it might be something I'd like to do for Disney Editions. He wound up writing such an incredible proposal that there was no reason he shouldn't do it himself. So I hooked him up with my editor, Jody Revenson, and he was off and running. Beyond that, I just chimed in with tidbits about my favorite attractions. The book was Alex's baby all the way, and I love what he did with it. I found out a bunch of things I didn't know, and I think that's saying something. He's wrapping up the Imagineering Field Guide to Epcot as we speak.

Oddly, Alex Wright's name is buried on the copyright page and the book is officially credited to “The Imagineers” on the cover and title page. The text is well written and filled with thousands of details. The book is divided into nine chapters that, after the introductory chapter “Imagineering 101,” begin with a chapter dedicated to overall aspects of the Magic Kingdom. The remaining seven chapters are devoted to the lands in the Magic Kingdom, each land receiving between 10 and 20 pages of attention.

“Imagineering 101” gives, over the course of eight pages, a simplified history of the origins of WED (now WDI) and explains its various divisions, such as Engineering, Prop Design, Show Writing, Architecture, and so on. A brief two-page glossary is helpful—and it's a nice touch to put this up front rather than dumping it in the back where it is less likely to be read. 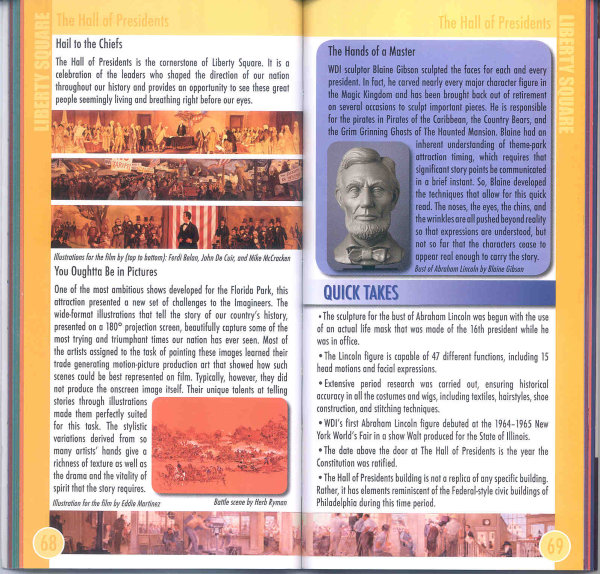 “Magic Kingdom Park” is a six-page overview of how the “Florida Project” came to be, Walt's goals, how it differs from Disneyland, and the ways—both cinematic and practical—in which the site for the Magic Kingdom was chosen and developed.

“Main Street, U.S.A.” devotes 16 pages to the land with no attractions, but with a huge share of charming detail. It's important to remember that this is not a guide book, so the usual “blah, blah, blah” is replaced by details about why many of the things in Main Street are built just so, such as the height of the windows. These are placed lower than normal so kids can see into the shops. If this level of detail fascinates you, then you'll love this book. Forced perspective and the tributes on the windows are also discussed.

“Adventureland” is represented by 14 pages, starting with the notion of an “Adventure” look. We're treated to concept art and details about the Jungle Cruise, Enchanted Tiki Room, Swiss Family Robinson Treehouse, and more. The discussion about the Magic Carpets of Aladdin centers around the new treatments being given to the pavement, and how this is being done around all of the parks. These types of details may seem picayune to the average reader, however when you look back at old photos of the parks and see the plain painted concrete walkways underfoot, it's a bit of a shock compared to the elaborate treatments they get now. We're even treated to Marc Davis's little-seen concept art for the two skeleton pirates playing chess in that little dungeon in the queue of Pirates of the Caribbean.

“Frontierland” delves 14 pages into the Country Bear Jamboree (did you know that Pete Reneday, who voices “Henry,” is also the voice of Abe Lincoln in the Hall of the Presidents?), Splash Mountain, Big Thunder Mountain Railroad, and Tom Sawyer Island. One of the things I noticed in this chapter is that the concept art that's reproduced doesn't duplicate the works I saw a few weeks ago when reading Disneyland: Then, Now, and Forever and The Art of Disneyland. It's fascinating to see how different artists such as Sam McKim and Dan Gouzee view the exterior of Splash Mountain.

“Liberty Square” displays, near the beginning of its 12-page chapter, two pieces of concept art by Herb Ryman that I've never seen before. The “entrance” concept art doesn't look like Liberty Square in Orlando, but bears an uncanny resemblance to the Cape Cod area of Tokyo DisneySea. In addition to Hall of the Presidents, this chapter looks at the Haunted Mansion and the Liberty Belle (née the Richard F. Irvine) Riverboat. With so few attractions to discuss, the author takes more time with the architectural details of the area and spends a page discussing the all-important visual transitions required as one land blends into another.

“Fantasyland” gets a big 20 pages and more photographs than any of the preceding chapters, dwelling on architectural details. Then, in the by-now-established manner, we're treated to pages on Cinderella Castle, Mickey's PhilHarmagic (with a nice photo of Blaine Gibson's maquettes for The Mickey Club Review—now located in Tokyo Disneyland), “it's a small world,” Cinderella's Golden Carrousel, Peter Pan's Flight, Snow White's Scary Adventures, Mad Tea Party, Dumbo the Flying Elephant, and finally The Many Adventures of Winnie the Pooh. The page on Pooh reproduces yet another piece of concept art (in addition to the one in Disneyland: Then, Now, and Forever seen recently) that shows the attraction originally planned as a water ride, with the Hunny Pots floating along. Too bad—so many of the pieces of concept art provide a hard dose of the reality of what happens when the number-crunchers collide with the dreamers. The second page devoted to Pooh reproduces a new piece of concept art for the Hundred Acre Wood play area that opened only last month. 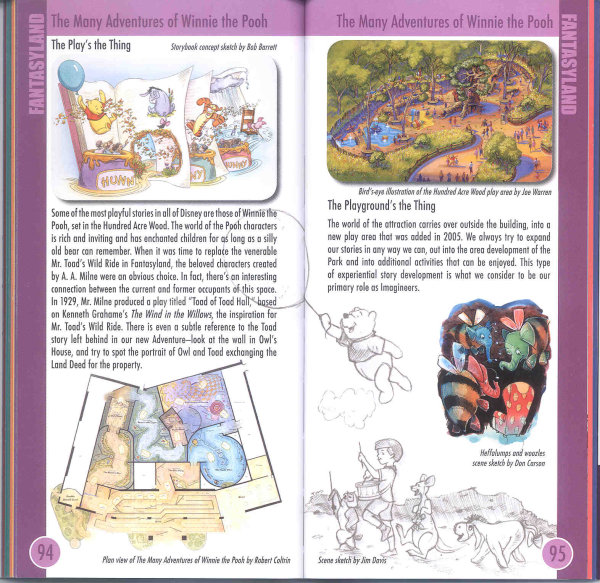 “Mickey's Toontown Fair” gets a brief 10 pages, befitting its complete inadequacy as a land. Instead of the marvelous Toontowns from the Anaheim or Tokyo parks, Walt Disney World got a short street with Goofy's Barnstormer as its main attraction. The marvelous concept art of the area by Chuck Ballew, which opens the section, has so much more exuberance, color, and interest than the actual street that it's hard to believe it depicts the same place. Despite the problems, the author takes the opportunity to discuss the general principles of animation and explain how they've been applied to three-dimensional architecture.

“Tomorrowland,” the book's final chapter (and 20 pages), begins by outlining the familiar problems Walt faced in trying to depict the future on an ongoing basis. The attractions discussed are the Tomorrowland Transit Authority, Stitch's Great Escape (grrrr...don't get me started), Tomorrowland's Indy Speedway, Astro Orbiter, Space Mountain, Buzz Lightyear's Space Ranger Spin, and Carousel of Progress. It's nice to read the author praise Carousel: “Perhaps no single attraction in all of our parks more clearly bears the signature of Walt Disney...” Let's hope it's still around in a few years so those words don't ring hollow. Two pages are devoted to one of my favorite attractions (also doomed, unfortunately): The Timekeeper. With this ride having already been ripped out of Disneyland Paris and Tokyo Disneyland (and turned into the mindless but fun Buzz Lightyear's Astro Blasters in both places), and now relegated to “seasonal” status in Walt Disney World (which means they've turned it, sadly, into yet another character meet-and-greet—the same depressing fate met by the Diamond Horseshoe), it's just a matter of time until the end. I've always thought this show was one of WDI's finest hours with a unique combination of audio-animatronics, 360 degree film, and visionary-imagination. It never seemed to draw the crowds it should have—perhaps because it requires you to stand in one spot for 20 minutes. A larger budget, which allowed for the installation of swiveling seats, would have given it a longer life. (Or hasn't anyone bothered to notice that almost no one wants to stand for the film Wonders of China in Epcot in the 20-plus years that it's been open?)

After a photo of Blaine Gibson's “Partners” statue surrounded by fireworks, the book ends with a bibliography and a fold-out map. A significant amount of the text also must, and does, deal with Disneyland in Anaheim. So even if you don't give a hoot about Walt Disney World, the books still contains much of interest.

Since the book is so small, you need to bend it open, flat, in order to see everything clearly. Fortunately the book is sewn, rather than glued, so the pages won't fall out when you do this.

Although I enjoyed The Imagineering Field Guide to the Magic Kingdom at Walt Disney World, I found the microscopic size of the reproductions of concept art to be very frustrating. Having to squint at an entire series of these books isn't a pleasing prospect. My wife, on the other hand, wasn't bothered at all by the tiny reproductions: They showed her as much detail as she wanted to see. Far more people will hold her opinion than mine, and so I think we'll see another three books in this series.