Earlier this year, when I heard that a pop-up book titled Quintessential Disney was going to be published, designed by David Carter (whose clever work in paper engineering I’ve been enjoying for decades), I was excited. Surely it would be something I could share with my daughter, three and a half, who loves not only pop-up books but also Disney animated films. 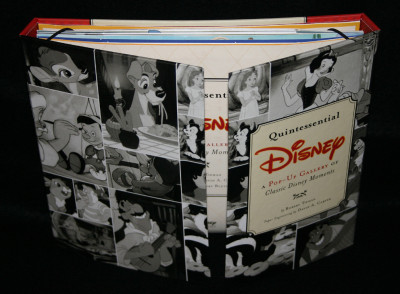 When the book arrived from Amazon.com in June my daughter took one look at the five static displays and immediately grew bored. “Let’s read Little Critter, Papa,” she said.

This book isn’t for kids. And it’s expensive. With it’s small size and only five pop-up pages, $30 seems like a high price.

I was genuinely puzzled at who the publishers thought the audience for this book would be until I saw Jim Hill’s review back on July 28 on JimHillmedia.com. He got it right away. “While decidedly not for children (They will probably be put off by the book's small type as well as by how fragile Carter's three dimensional versions of Bluth's illustrations are), ‘Quintessential Disney’ is still a volume that most every serious Disney-based bibliophile should have in their collection.” 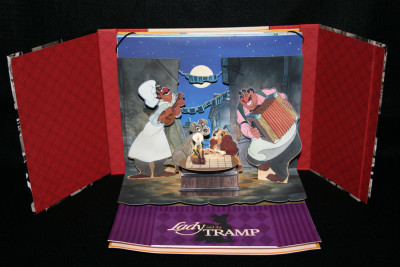 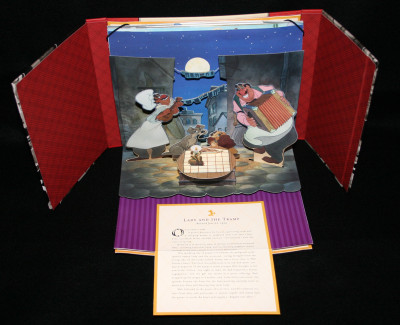 The book is cleverly designed. It has an overlapping magnetic flap on the cover to keep it closed. The cover splits near center and folds open in both directions, creating a real feeling of presentation (the endpapers are deep red with a cross-hatched pattern-not unlike the wallpaper you might have seen in a theater many decades ago). The pages, hinged at the bottom in the fashion of the Jolly Jump-Up books from the 1930s, are held at the upper corners by black string elastic. Each of the five pop-up pages also has a fold-open flap on the bottom containing a brief essay. 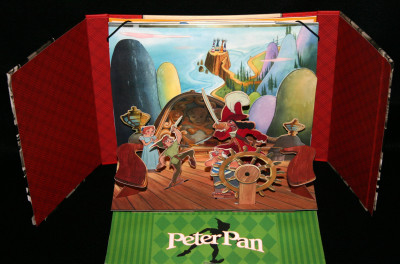 “Quintessence” is defined by the Merriam-Webster Dictionary as “the essence of a thing in its purest and most concentrated form.” It’s a seemingly hopeless task to capture the essence of anything in five pages, let alone the 19 complex classic animated films made by Walt Disney. Wisely, the author steers clear of all the movies released after Walt’s involvement ended. Still, how to select only five “scenes” from the films? Robert Tieman acknowledges this in the essay which opens the book, “So, where to begin in picking the essential ingredients that imprint these movies so powerfully on our hearts and minds?”

With the balance of the essay he explains that he has narrowed down the essential elements to five: romance, adventure, friendship, fantasy, and music. Each of those elements receive one pop-up page. The small essay on the fold-out flap imparts the kind of anecdotal tidbits that fanatics enjoy so much. 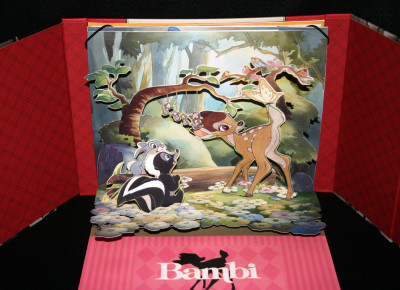 The five films chosen for these Disney “moments” are Lady and the Tramp, Peter Pan, Bambi, Pinocchio, and Snow White and the Seven Dwarfs. Not a mouse in sight and only one princess. Since everyone reading the book would chose different essential moments in different films, there’s no point in criticizing the author’s choices: he got hired to write the book and we didn’t. If you buy the book, then you accept his choices. My choices, for example, might have included Mowgli and Baloo in The Jungle Book for Friendship, or a scene from Alice in Wonderland for Fantasy. For Romance my choice would not have been dogs (as in Lady and the Tramp), but people, as in Cinderella or Sleeping Beauty. And as one of the categories, I might have found a way to phrase “The Anthropomorphization of Animals and Objects” into something palatable and chosen a scene for that. But all of this is neither here nor there: each of you will make different choices because of how Walt Disney’s animated films affected you. This is Robert Tieman’s book and these are his choices.

David Carter’s paper engineering is a delight—he’s one of the best in his field and the pop-up scenes have a pleasing sense of depth and are reasonably complex. Disney’s animated films lend themselves particularly well to representation in pop-up books because of the way the paper sculpture replicates the visual experience of Ub Iwerks’ multi-plane camera first used in Disney animation. 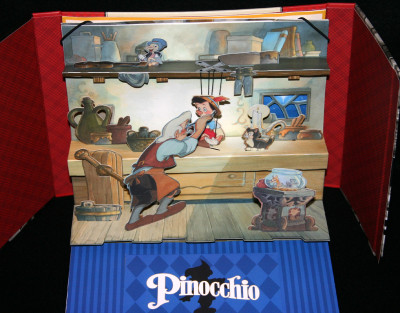 The illustrations by Toby Bluth perfectly capture the characters and backgrounds with a painterly watercolor style that reminds me (pleasantly so) of the early backgrounds of Disney animated films.

There’s really not much else to write about Quintessential Disney; you need to see it. It’s a book that lives in three dimensions. Fans of pop-up books and Disney animated films will be very pleased. 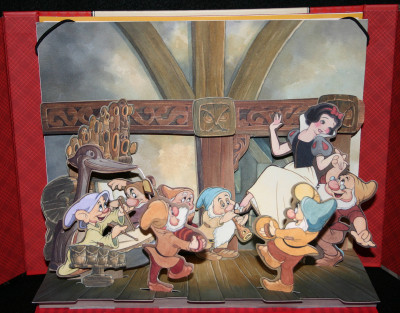