These three books are available at the Disneyland Resort and (with the exception of the Dining Activity Book) probably through Disneyland DelivEars as well at 800-362-4533.

I had the good fortune to spend six days at the Disneyland Resort at the beginning of November. You've got to admire what the new president of the resort, Matt Ouimet, is doing—the place has never looked better. The Grand Californian is still one of my favorite hotels and the Downtown Disney area is a lot of fun. As members of the Disney Vacation Club timeshare program, we generally relax at Walt Disney World in Orlando. But, the heat, humidity, and rain, as well as the distance between the hotels, parks, and Downtown Disney, have left us weary. The Disneyland Resort in Anaheim is a delight: the weather in California is great (the humidity is lower, so even when it's hot it doesn't feel as hot as Orlando), and the three Disney hotels, Downtown Disney, and two theme parks are all a short walk from one another. And Downtown Disney in Anaheim is a completely different experience than the one in Orlando. While the latter is much larger, the former has street performers and a much more festive atmosphere.

My park-going always involves a hefty bit of shopping, which is typical if you're a collector. This time I managed to avoid buying the Big Al “big fig” [extra-large figurines] that, while sold out on DisneyShopping.com, is readily available at the Disneyana Shop on Main Street, Off the Page in Disney's California Adventure, and the World of Disney store in Downtown Disney. I have five big figs already and can't figure out what to do with those—they're so heavy and tall that they won't fit on a shelf so they mostly sit on the floor or on a pedestal. Aside from Big Al, the one that keeps luring me back is the Fantasyland big fig, which is a four-sided reproduction of the facades of Mr. Toad's Wild Ride, Pinocchio's Daring Adventure, Snow White's Scary Adventure, and Peter Pan's Flight. The detail is astounding. Alas, it's another huge hunk of resin I can find a good spot for.

I did succumb to the siren call of Dave Avanzino's five “Land Logo” shadowboxes, which are mass-produced versions of the limited edition hand-made pieces he produced for the 2001 Disneyana Convention. You can find images of the originals on the wonderful Web site for collectors, A House of Disney (link). In four of the pieces, he re-creates the name of one of the Disneyland “lands” using iconic images in the form of letters, and in the fifth, the name “Disneyland” itself. They're witty and attractive and at $75 each, less than one-tenth the price of the originals (and he only made five each of the originals, so you would never be able buy those anyway). If you've got some spare cash and an empty wall in your house, these pieces by Avanzino are a great way to fill it.

But, since I've been writing about books for MousePlanet, it seemed like a good time to scope out the latest tempting tomes. Didn't find anything new of great substance, however my wanderings led me to three inexpensive books. Possibly one of them might interest you.

The Disneyland Photo Pop Up Book

Much earlier this year I read something about Disney putting out a photo album that was also a pop-up book. It sounded odd, but I like pop-up books and went searching for it when I visited the resort on July 17—it was nowhere to be found. But, there it was on the shelf in early November along with all the other souvenirs bearing the retro theming that Disney has been promoting since early this year. 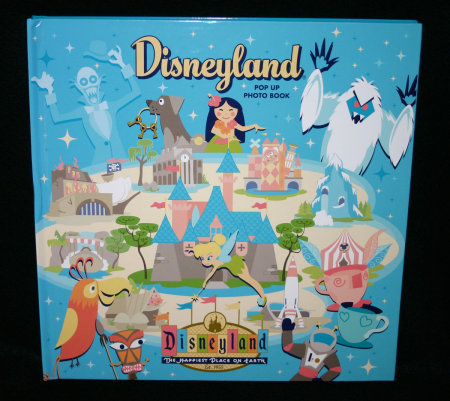 I find this line of merchandise attractive with its broadly drawn simplicity (it harkens back to the designs of the early silk-screened park attraction posters) and Disney must be banking on that since it appears on everything from pins and postcards to shirts and purses. There must be over 50 souvenirs with some part of this artwork on them. 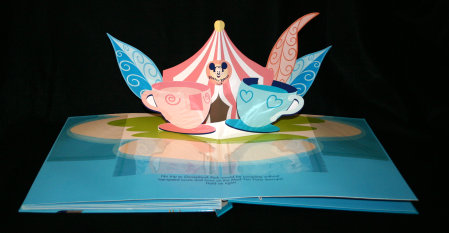 The pop-up photo book is as odd as it sounded: it's quite large at 11 inches square and each of its nine two-page spreads has one immense pop-up scene from a single attraction. On the flat portion of each two-page spread are four clear envelopes, open at one end (two vertical and two horizontal) in which you are supposed to place your 3 1/2 by 5 inch vacation photographs. Without any of your photographs in it, this “photo book” looks painfully bare. Perhaps that's why it doesn't seem to have attracted much attention. But it's fun and cheap: only $16 for pop-ups of Sleeping Beauty Castle (with Tinkerbell), The Enchanted Tiki Room (with a Tiki bird), The Jungle Cruise (with boat and angry native), Pirates of the Caribbean (with burning town, Wicked Wench, and that rascal doggie with the ring of keys in his mouth), the Haunted Mansion (with a sharp-toothed Ezra out front), “it's a small world” (with parts of the facade and a Hawaiian dancer), the Matterhorn (in an odd blue color, but the rendering of the Yeti is a hoot), the Mad Tea Party (which pictures the teacups in front of the old Mickey Mouse Club tent), and the old Rocket to the Moon (with a spaceman beside it). It's a steal at the asking price.

Didn't even know this one existed, but upon purchasing my daughter's lunch one day, the castmember behind the counter asked if I would like to add an activity book to the sale. Figuring it was worth the chance, I bought one.

First of all, it's not a book: it's a folder. By that I mean it's got four pages inside and out. Imbedded in the front cover is one of the earliest forms of transforming pictures. In this case, a sepia photograph of Sleeping Beauty's Castle transforms into a full-color photo of the Castle done up for the 50th when you pull the tab on the side. 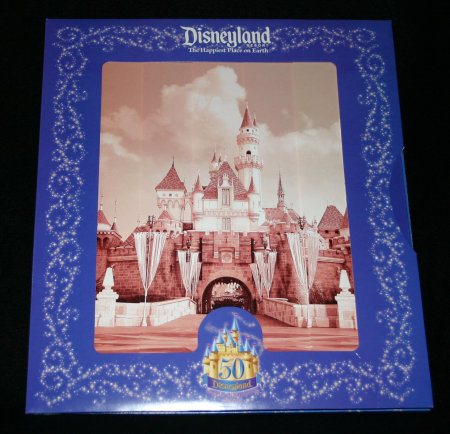 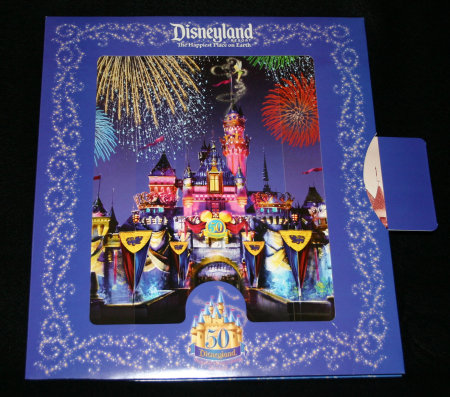 The back cover has a matching game on it, however its intended audience seems more like Disney Geeks (my hand is raised) than children, since you have to match a text-heavy description to artwork of one of the five crowns that decorate Sleeping Beauty's Castle for the 50th. I think any kid that who would be old enough to recognize the Eye of Mara crown is going to be too old to enjoy this. 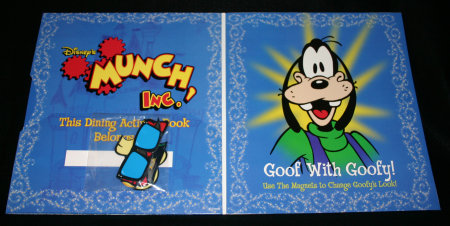 Inside there is only one thing: a large drawing of Goofy on the right and a small Ziploc bag containing various magnetic pieces on the left. The pieces are for dressing up Goofy. You get one pair of sunglasses, one moustache, one bowtie, and four different hats (one of which is the golden 50th anniversary mouse ears). My daughter lost interest after about 30 seconds, but that means it ended up on my shelf—which isn't a bad thing. 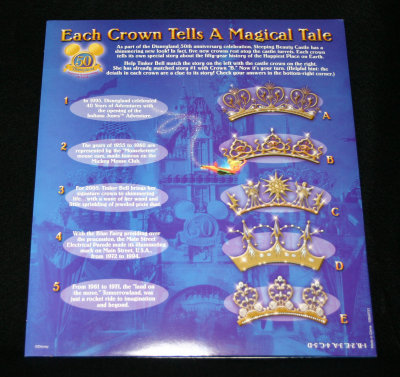 Back to pictorial souvenir books, which I wrote about several months ago (link). The 2005 Disneyland edition, priced at a bargain of $6.95, is hard to leave the park without. Aside from the singularly unattractive cover, it's nicely done. 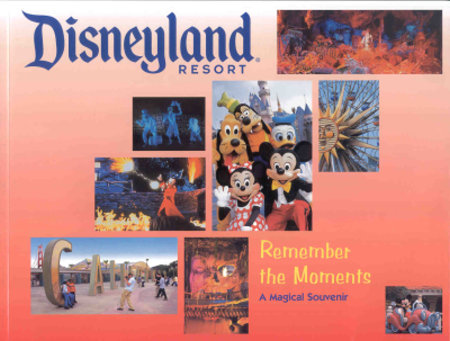 The book begins with Walt's famous quote from opening day and then tours both parks land by land with nicely reproduced and decent-sized color photos of almost every major attraction. While there are scads of tiny photographs, they are of interesting details of signs, characters, and sculptures from all around the parks. Some of these small touches are great: photos of Esmerelda from the Penny Arcade and piles of silhouettes from the Silhouette Shop add some genuine texture and variety.

The larger photographs provide excellent views of the attractions (though there are two photos of Big Thunder Mountain Railroad with the train in the exact same position beside the dinosaur bones, simply shot from a different angle, which reveal a careless choice—where's the little town of Rainbow Ridge?). The four pages devoted to New Orleans Square are among the best, with ample large shots of the Haunted Mansion and some of its residents, and fantastic panoramic shots of Pirates of the Caribbean—the latter to be particularly treasured since our beloved Pirates are about to be changed forever during the upcoming rehab when Captain Jack Sparrow takes up residence. There's also a terrific shot of Blaine Gibson's ferocious Yeti inside the Matterhorn. And if you've ever wanted to get a longer look at the family that disappeared inside the elevator on that fateful night when lightening struck the Hollywood Tower Hotel, the two pages devoted to The Twilight Zone Tower of Terror will give you the opportunity.

Most of the photos appear to be reasonably up to date, some exceptions being the facade of “it's a small world,” which is shown in the pastel colors that have been gone for well over a year, and the side of the Playhouse Disney building which is still shown as “Bountiful Valley Farm” rather than “A Bug's Land.” A note to the people in charge—folks, please stop putting in photos of the Jolly Trolley if you're not going to get it out of the barn once in a while.

Overall, for $7, this is a fun souvenir. It would also make a great stocking stuffer for the holidays if you have friends who are contemplating a visit to the Disneyland Resort.

(Note: The following publication information applies only to the pictorial souvenir book. The Pop Up Photo Book and Dining Activity Book carry no information.)