Disney Villains: The Top Secret Files by Anonymous (as told to Jeff Kurtti) 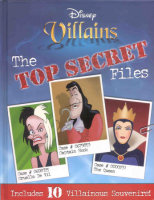 This book can be purchased at Amazon.com for $11.

I have a weakness for books that are also toys—the kind with things that pop up, push out, that have facsimiles which can be removed, models that can be constructed. Not only do I enjoy reading books, but I enjoy playing with them (when appropriate) as well. This has stayed with me since childhood and even today I can vividly remember assembling the items in the Sword in the Stone punch-out book.

Have you ever heard of becker&mayer!? Probably not unless you're a book nut and peruse the fine print in books like The Disney Treasures, The Disney Keepsakes, and Quintessential Disney, trying to determine who's helping Disney Editions make these books so much fun. Go to www.beckermayer.com and have a look around. If you've purchased that fancy new interactive Bob Dylan Scrapbook for someone this holiday season, you might be interested to know that becker&mayer! put it together.

One of the Disney books becker&mayer! produced this year is, admittedly, just for kids—but if you're reading this column, on this website, then you're kinda still a kid, too. Happy to have you in the group. Disney Villains: The Top Secret Files flew in under the radar in September. I found it by accident on a recent trip to Disneyland at the World of Disney store. Unfortunately the only copy on the shelf had been greatly enjoyed by many little hands, so upon returning home I ordered it from Amazon.com (and paid much less, besides). 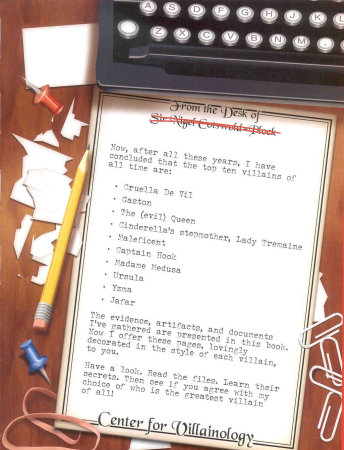 Jeff Kurtti, author of Since the World Began: Walt Disney World The First 25 Years, this year's The Art of Disneyland as well as the upcoming Walt Disney's Legends of Imagineering and the Genesis of the Disney Theme Park, has done an admirable and humorous job in a compact book that, for $16 (or $11 on Amazon), is a bargain.

Disney Villains: The Top Secret Files focuses on ten of Disney's most fiendish animated personalities, including a few who don't always make the first cut of villainy. So, in addition to Cruella De Vil, The Evil Queen, Lady Tremaine, Maleficent, Captain Hook, Ursula, and Jafar, you also find Madame Medusa from The Rescuers, Yzma from The Emperor's New Groove, and Gaston from Beauty and the Beast.

Under the funny premise of a "Center for Villainology" run by "Sir Nigel Cotswold Plock," the book explores what a Top Secret File on each of these villains might contain. It's full of funny lines, bad puns, parodies, in-jokes for Disneyphiles, and just plain silliness. How silly? The first lines of the book appear on a page of stationary painted to appear as if it's lying on the author's desk. The letter reads: "Villains. I love 'em. Always have. Who am I? I'm a villainologist. I study villains for a living. It's dangerous work, so I try to keep my identity a secret." But across the top of the stationary is printed, "From the Desk of Sir Nigel Cotswold Plock" in lettering that's been crossed out with only two thin red lines so anyone can still read it. "Were they born to be vile or did they chose the vile lifestyle? That's what I've set out to discover." We go along for the ride. 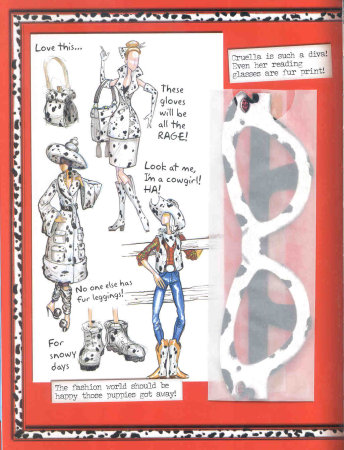 After listing the ten villains he's chosen, Sir Nigel "presents" the facts: "The evidence, artifacts, and documents I've gathered are presented in this book." He ends by challenging us to see if we agree with his choice for "the greatest villain of all."

Each of the ten chosen villains gets four pages of illustrations which include faux notes, photographs (actually drawings) of their youthful experiences which might have led to their later villainous behavior, memos swiped from their desks, and Sir Nigel's own notes on their personalities. For Cruella De Vil he writes, "Selfish and prone to emotional outbursts. Bad temper, bad taste, and bad hair." Her British driver's license is displayed with the word "REVOKED" in big red letters across it, as well as a pile of parking tickets she's received. Her "plus" piece is a removable pair of glasses (cardboard) with Dalmatian print.

The vain Gaston is revealed to have been enraptured by self-love since childhood, as well as being a long-time grievous and deceitful liar. His "plus" piece is a removable copy of his 5th-grade report card, where he's had the temerity to cross out all the bad things his teachers wrote, leaving only select words which appear to praise him. So he's an imbecile as well—but at least he's an amusing one. 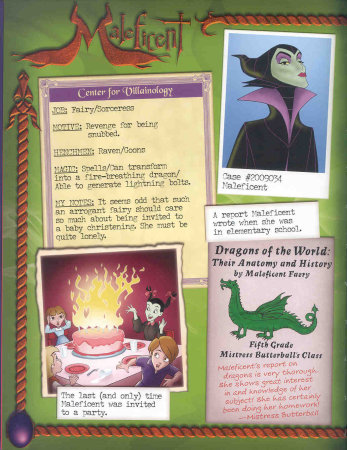 Plock's note on Maleficent is: "It seems odd that such an arrogant fairy should care so much about being invited to a baby christening. She must be quite lonely." That gave me a chuckle, but the funnier bit is below it in the childhood "photo" of Maleficent torching a birthday cake at a party. Her "plus" piece is a traditional changing picture that prints her invocation to turn into a dragon—when you pull the tab it transforms into a picture of the dragon itself.

Madame Medusa gets a rejection letter from the Morningside Orphanage, but it's signed by "Frank Thomas" and "Johnston Ollie." You know Jeff Kurtti put that in for us.

Ursula's "plus" piece is a purple seashell which opens to reveal "the necklace that held Ariel's voice" in the form of a removable cardboard seashell on a ribbon. 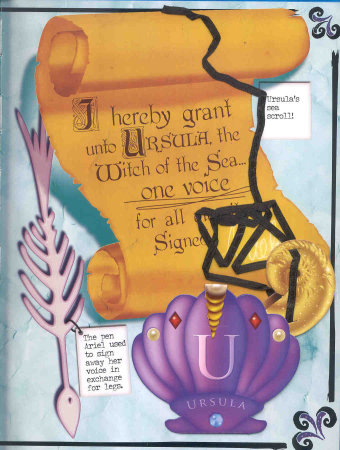 After you've gone through all the various bits of villainy and clues that Sir Nigel has gathered, you come to two pages with panels that reveal the rankings of the perpetrators: pull down the tabs and the results will be revealed. But I'm not going to tell you who the most villainous of all is—you'll need to shell out a few bucks and have some fun to get that info.