Behind the Magic: 50 Years of Disneyland

Behind the Magic—50 Years of Disneyland by Karal Ann Marling with Donna R. Braden 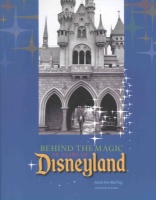 This book is only available directly from the Henry Ford Museum (www.thehenryford.org)

Not only has the 50th anniversary of Disneyland spawned enough merchandise and books to fill a dump truck, and created enormous (and sometimes dangerous) crowds at the park itself, it has also generated what looks to be a very fine exhibit at The Henry Ford Museum in Dearborn, Michigan (about nine miles from Detroit). It's not surprising if you haven't heard about it: not many folks outside of the Midwest get to Dearborn. The museum is part of a larger complex that also encompasses Greenfield Village, built by Henry Ford for much the same reason that Walt Disney built Disneyland: to give kids and adults a place they could enjoy together, and to preserve a part of their past that was hard-wired into their brains—the romantic image of a small town in middle America at the turn of the century.

Walt Disney visited Greenfield Village twice, in 1940 and 1948, bringing Ward Kimball with him the second time. (A tintype which Disney had made in one of the park shops has been reproduced and is available from the museum shop.) Greenfield Village has a Main Street and a large waterway traversed by a steamboat somewhat like the Mark Twain at Disneyland—so Walt was definitely influenced by his visit. (While Greenfield Village also has a railroad track which circles the perimeter of the park, this wasn't added until decades later.) 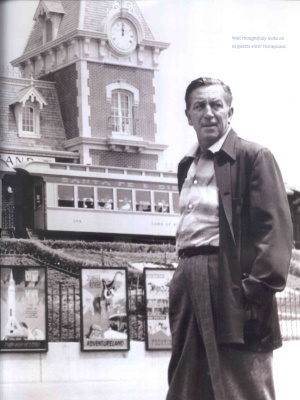 Fortunately, the exhibit at The Henry Ford Museum, which closes on January 8, will next travel to San Francisco and is scheduled to make other stops as well (though the cities haven't been announced yet). The book produced by The Henry Ford Museum, Behind the Magic—50 Years of Disneyland, is a beautifully designed basic introduction to Walt's concept of Disneyland and how it was brought to life in 1955. If you're already a Disneyland fanatic and have read multiple books on the subject of Walt's life and the origins of the park, you find little new here. On the other hand, if you're already a fanatic on these subjects, you will probably buy this book because that is your nature! The perfect audience would be someone like my wife, who (if she ever had any spare time) might be interested in the background of something in which I'm so interested, and someplace where we've spent so much time.

The book is not a catalogue of the exhibit: there isn't a single photograph of any of the 3D items on display that isn't a vintage photo from the Disney Archives. No photos of the original audio-animatronic figure of Abraham Lincoln, the ride vehicles, or the models from Imagineering—all of which are on display at the museum. The book seems purposefully designed to be more of a general interest publication and it contains reproductions of many pieces of concept art, silk-screened attraction posters from almost all the opening-day attractions, and lots of photographs of Walt Disney.

Behind the Magic—50 Years of Disneyland begins with a foreword by the president of The Henry Ford which draws parallels between Ford and Disney and talks a bit about the development of Greenfield Village. This is followed by an introduction by Marty Sklar (current head of Walt Disney Imagineering), which contains general remarks about Disneyland and his experiences as an employee there as he rose through the ranks. The opening page of his piece displays the cover of the very first souvenir book from 1955, and this begins the motif and structure for the balance of the book.

Chapter One, “To All Who Come to This Happy Place… Welcome!” opens by reproducing the first two pages of the Disneyland souvenir book, Welcome to Disneyland and The Story of Disneyland. Author Marling exactly echoes this by providing a reasonably detailed description of Disneyland's pre-opening creation, and opening day fiasco—Black Sunday. The original opening day Disneyland map is reproduced across two full pages.

Chapter Two, “Disneyland on TV,” continues the explication of the origins of Disneyland with a discussion of Walt's use of the ABC TV show Disneyland in order to promote awareness of the park during its construction, and follows this up with some examples of the mishaps which occurred during the opening day telecast. The author delves a bit into Walt's fascination with trains and the miniature Carolwood-Pacific railroad which he built behind his home, and also gives a bit of pop-culture background to place the creation of Disneyland into the historical moment in which it came to be.

Chapter Three, “Main Street USA” finally brings us to Disneyland itself as it was on opening day. And here begins the bulk of the lovely WED concept art that brings the book much of its appeal (and which I assume makes up a good part of the museum's exhibition). The art is produced in reasonably large size so the details can be appreciated. My only qualm here is that none of the names of the artists are provided in the captions—all are relegated to a page at the back of the book. Not only is this insulting to the work of the artists so vitally involved in the creation of the park, but it's simply a pain in the keister to have to keep flipping to the back of the book to see whose artwork is whose. The beautiful image of Main Street that stretches across the tops of pages 38 and 39 is obviously the work of Herb Ryman, but for those who won't recognize that, it's hard to imagine many of them making the effort to keep flipping to page 110 for the “Image Credits.”

Since the author is a pop-culture expert, the text meanders into facts about TV shows of the 1950s and how she believes this relates to Disneyland. Debts to Knott's Berry Farm's Ghost town, as well as Harper Goff's childhood town of Fort Collins, Colorado (which shows up in his concept sketches), are also pointed out. There's also a bit of sociological theorizing, such as: “Having a single point of entry into Disneyland meant that everyone had to walk down Main Street together, in a great democratic ritual of collectivity.” Sounds like the college courses in popular culture that I used to take to avoid math and science! The unbuilt areas of Edison Square and Liberty Street each get a page with some fabulous concept art. 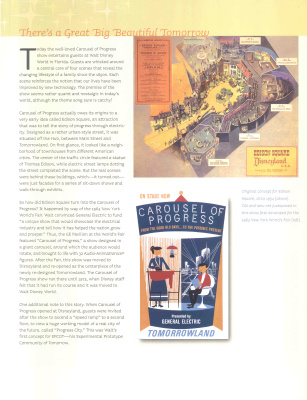 Chapter Four, “Fantasyland,” delves into the history of the dark rides, particularly “Peter Pan's Flight,” illustrated by Bill Martin's cutaway view of the entire track layout. We're also treated to Bruce Bushman's original Fantasyland artwork, which has been much reproduced this year. Additional artwork by Herb Ryman of Sleeping Beauty's Castle, and Mary Blair (“it's a small world”) round out the visual offerings. The text offers quite a bit of descriptive material regarding the rides—almost as if it's directed at people who've never been on them. That seems odd, since I would imagine that only people who've already been to Disneyland would buy this book.

Chapter Five, “Frontierland,” begins with the Davy Crockett TV phenomenon, then moves into another sociological digression on why the west appealed so deeply to the American public after World War II. With the overwhelming number of Western TV shows and films, I suppose there was never any question that Disney would include a Frontierland in the park. This seems like a good time to mention that, throughout the book, the wonderful original attraction posters give a big lift to the design, adding color and aesthetic sense. Four Frontierland posters are reproduced on p.69—I hadn't seen the Casa de Fritos poster before.

A sidebar about Mark Twain gives us the opportunity to see an uncommon and enticing map of Tom Sawyer Island by Herb Ryman. Page 77 shows us another less well-known piece of 1954 concept art by Willis O'Brien for “The Reel-Ride,” which, if built, might have been the first motion simulator attraction: Kids sitting on mechanical horses in front of a screen on which a coordinated film would be projected. I've never before heard of Willis O'Brien (the man who brought King Kong to life) being involved in the creation of any rides for Disneyland—and I've searched Google without success for someone with the same name involved in the field aside from the Willis O'Brien. Fascinating. 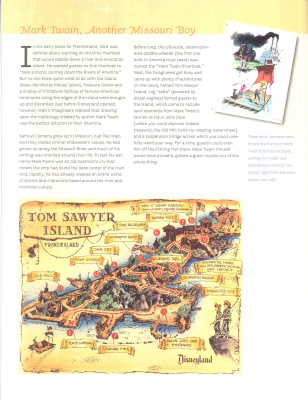 Oddly, the author manages to sneak in a page and a half about the Haunted Mansion in the “Frontierland” chapter.

Chapter Six takes us to “Adventureland” and repeats the well-told tale about its inspiration being provided by Disney's True-Life Adventures series of documentary films. The creation of the Jungle Cruise is given a nice chunk of text. The evolution of The Enchanted Tiki Room and the Tahitian Terrace are explored as part of a pop culture phenomenon which emerged when Hawaii became the 50th state in 1959. A sidebar page gives a peek into The Pirates of the Caribbean.

Chapter Seven, “Tomorrowland,” begins with a nod to the pop-culture interests of the day, linking satellites and '50s sci-fi films like Forbidden Planet to the creation of Tomorrowland. After a nod to Walt's problems in getting Tomorrowland open on time, and a brief mention of the various weak attractions to be had, there's a nice bit about Autopia and a sidebar page devoted to the Flying Saucer ride. Much space is devoted to Monsanto's House of the Future—perhaps the ultimate physical incarnation of the pop-culture yearning for the smooth easy life of rounded plastics promised by the future.

Finally, Chapter Eight, “The American Dream Come True,” analyzes, from a sociological point of view, why Disneyland became so popular and has been so successful. I don't have a lot of patience for psycho-babble about why what was in Walt Disney's head became so popular with people around the world. You don't need a PhD to explain it. He knew how to entertain people at a deep emotional level—and that's the real and disarmingly simple secret behind Disneyland's success for the past 50 years.

If we hadn't seen so many books loaded with concept art already published this year, Behind the Magic would be an even more valuable resource for the Disneyphile. As it is, it's extremely well produced and printed on beautiful enamel stock with colors that pop off the page. The low price bumps it up to highly recommended.

In addition to the book Behind the Magic—50 Years of Disneyland, The Henry Ford has produced an entire line of souvenirs to go along with the exhibit. You can find them all at its Web site (link). There are mugs, sweatshirts, tin signs, a spectacular postcard set of 24 images of concept art (only $14.95) that were used in the book. There are also five posters, each with a different piece of concept art, the highlight of which (for me) is Clem Hall's Stretching Paintings from the Haunted Mansion—you can't beat the $10 price. 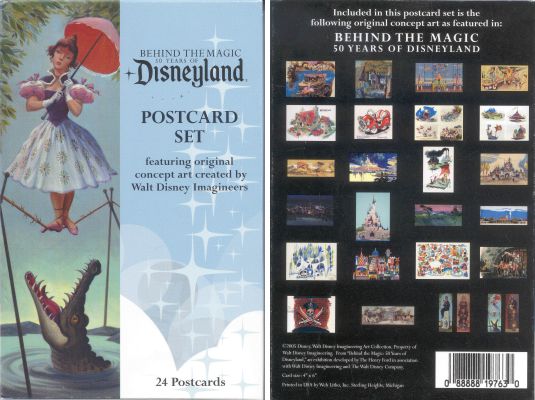