The Sounds of Disneyland by Stacia Martin, designed by Bruce Gordon

Publisher: Not identified (but either Walt Disney Company or Disney Records).
Date of publication: 2005
Format: Hardcover with inset printed foil card.
Page count: 72
ISBN: 0-7634-2158-8
MSRP: $124.99 (Theme-Park Edition with black vinyl record); $70 (Discount price reported at Costco for the general release which does not contain the record) 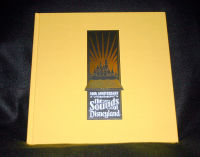 The 50th anniversary of Disneyland has brought a bounty of things and one of the most eagerly awaited was the six-CD boxed set, The Sounds of Disneyland. For all of us who were disappointed when the Disneyland and Walt Disney World Forever kiosks suddenly disappeared several years ago, this new boxed set promised to deliver remastered versions of what we craved. For this we have to thank producer Randy Thornton, without whose diligent efforts in convincing the Walt Disney Company that lots of people would pay about $100, there simply would be no project like this. 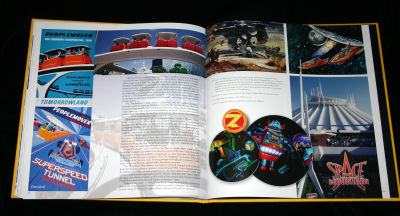 There's been some chit-chat on the Internet about some of Mr. Thornton's choices in producing the album—the new mixes have an odd reverb added to many of the voices in an effort to re-create the “you are there” audio experience. Many people don't care for that, so don't be too quick to get rid of any earlier park CDs of the Haunted Mansion, Pirates of the Caribbean, or The Enchanted Tiki Room. Additionally, Mr. Thornton has stated that he prefers to let people use their imagination and so has sometimes not included the vocal narration that should accompany the musical track from an attraction—you just get the music. A mistake, in my opinion. And there are some defects in a few tracks: the Carousel of Progress track is ruined by a high-pitched electronic sound that comes and goes. Despite these issues, the set is a milestone for lovers of Disneyland music and attractions.

The six CDs come in a large box (LP size) covered in an expensive red cloth. Inside the box there are two “books,” one of which, covered in black cloth, holds the six CDs. The other book, covered in bright yellow cloth, is a real book, a great book: The Sounds of Disneyland by Stacia Martin and Bruce Gordon. The Theme-Park only edition of this set (also available at Disneyshopping.com for $124.99) includes a new pressing on black vinyl of the 1950s record album Walt Takes You To Disneyland. There was an initial limited edition release with a gold vinyl pressing of the record in May of 2005 which, even though long sold out, can easily be found on eBay if you're willing to pay the price. If you don't care about the reproduction of the record (which, face it, you're probably not going to play—and it can be purchased separately as a CD), then the obvious choice is to purchase the set at Costco where it costs about $70. The CDs and book are identical in the lower-priced set. 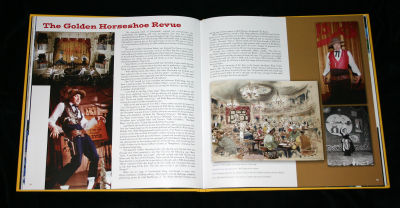 The book that comes inside the box with the six CDs has received little attention. It seems most people flip through it only briefly because they really bought the set for CDs. That's too bad, because the book is terrific: in my opinion second only to Disneyland: Then, Now, and Forever in this 50th Anniversary Celebration in successfully giving us so much interesting information along with even more conceptual art and lovely photographs.

Bruce Gordon does his usual excellent design: the reproductions of the concept art and silk-screened attraction posters, as well as the photographs, are all large enough so the details can be seen. The choice of illustrative material is very good: most of it is different than what has already appeared this year in The Art of Disneyland and Disneyland: Then, Now, and Forever. The type is large and easy to read. From a visual standpoint it's a pleasant journey all the way.

The text by Stacia Martin is finely written, loaded with detail. It focuses on the importance of music, vocal performances, and sound effects to the creation of Disneyland and its various lands and attractions. Coming from a cinematic background, Walt Disney saw that music could be used in live situations to create the feeling of almost walking into a film. This idea of total control of the environment is one of the things that has made Disneyland unique from the day it opened.

The Preface gives a brief background of the history of music in Disney's films and the creation of Disneyland and its saturation into the consciousness of America through the Disneyland TV show on ABC. Martin writes:

The opening titles of Disneyland featured the park's centerpiece, Sleeping Beauty Castle, and the 1940 Pinocchio recording of “When you Wish Upon a Star,” perfectly setting the viewer's mood for the magic to follow. Televised storytelling transitioned from the small screen to real life, then, when Disneyland visitors were finally able to visit that castle in truth; as they passed over the drawbridge themselves, that same Oscar-winning audio was playing, linking reality with fantasy and providing a soundtrack for the story of the guests' own Disney adventure.

And there you have it, in two remarkably succinct sentences: the theory behind the music used throughout the park.

The book is divided into sections that mirror the division of music among the six CDs: by land, starting with Main Street, then to Adventureland and clockwise around the park until you reach Tomorrowland. (This, incidentally, is the way I've always toured all the Magic Kingdoms—though many people get to the end of Main Street and immediately turn right. Perhaps that's because they're Space Mountaineers.)

One of the things that makes this book so enjoyable is that it's a full-bodied text, not simply a tossed-off accompaniment to the CDs. Aside from a small sidebar on the first page of each “Land” chapter, there is no reference to the CDs (though a full track listing appears on pages 4 to 7). 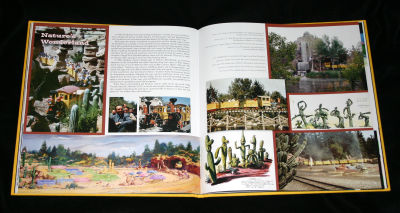 Is there a better way to begin the chapter on Main Street, U.S.A. than this? “Although Main Street, U.S.A. stretches a mere 330 feet in length from Town Square to Disneyland's central Plaza Hub, it encapsulates an entire way of life that the world has since passed by... the world that Walt himself know from his early childhood in Marceline, Missouri. Inspired in part by that town's bustling Kansas Avenue, Main Street faithfully recreates the charm of those gas lamp days, from the smells of the bake shop and the clip-clop of the trolley horse's hooves to the merry jangle of the coin operated orchestrion beneath the lights of the Penny Arcade. Main Street, U.S.A. serves as a transition from the real world into Walt Disney's lands of fantasy. Join us now on a journey of discovery, memory, and magic.” I don't know about you, but that evocative text makes me want to read more—and it's so well-written compared to some of the public-relations blather that passes for text in many books these days.

The chapter on Main Street also covers its entertainers, gives their history (and the history of the Disneyland Band), talks about the various music shops, and eventually makes its way to Great Moments with Mr. Lincoln. Here, in addition to the fine details about the soundtrack to this classic attraction, we're given some less well-known Herb Ryman concept art.

Next up is the chapter on Adventureland, and here we enter Tiki heaven: four pages of background on The Enchanted Tiki Room and its music told in a way I've never read before. The history of how the show was written and developed, with Wally Boag, Fulton Burley, and the Sherman brothers being brought in at the end to tie together something that wasn't working is fascinating, and the kind of thing that differentiates this book from many others. Even though there's no music on the CDs for The Jungle Cruise, the authors manage to slip in an almost full-page reproduction of a menacing group of natives over Schweitzer Falls by Sam McKim—yet another great piece of art that's been little seen. In the two pages devoted to the Indiana Jones Adventure there's another piece of concept art I haven't seen before: a Nina Rae Vaughan painting that appears to be heavily inspired by Herb Ryman, and another piece by Bryan Jowers that is mistakenly attributed to Herb Ryman (which caused some needless derogatory remarks on the Internet).

Mrs. Martin continues on through New Orleans Square, devoting four pages to Pirates of the Caribbean and another four to The Haunted Mansion. We read and hear much about how the Audio-Animatronic Lincoln figure and the boat system from “it's a small world” at the New York World's Fair were important in the development of new attractions for Disneyland, but we don't hear nearly as much about the Ford Magic Skyway. Again the author has a wonderfully concise way of getting to the point:

“The Ford Wonder Rotunda's Magic Skyway ride and its situational caveman tableaux gave writers and musicians new opportunities to present an on-going show unbounded by a theatre proscenium or a single environment. Staging, character dialogue, and musical scoring would need to be carefully timed to give each guest a full grasp of the proceedings, but in such a way that the cycling action appeared to take place in real time despite the audience's presence.”

The writing for the balance of the chapters is just as rich in details and anecdotes, and the concept art and photographs are just as interesting and unusual. I won't summarize any more... I think you get the picture. Even if you have no interest in listening to the CDs of Disneyland music that come in this box set, true Disney aficionados will find this book a must-have even if they have to pay $70 at Costco to get it!

Perhaps the importance of music to Disneyland, its atmosphere, rides, and attractions is best summed up by an anecdote from George Bruns' that the author relates regarding Pirates of the Caribbean: “Bruns once remarked that Walt Disney 'thought of music as a supporting actor... it supports the picture'.” It's impossible to imagine Disneyland devoid of the music and lyrics of George Bruns, X Atencio, and the Sherman brothers; without the dozens of voices of Paul Frees, Thurl Ravenscroft, Royal Dano, and Wally Boag; without the behind-the-scenes work of the sound engineers and designers who make the motors chug and the birds squawk. Can you imagine Disneyland in total silence? No, and this book helps you to understand why. 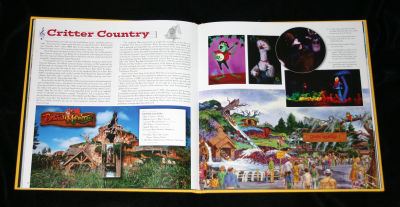