Mickey and the Gang

This book is available from Amazon.com at heavily discounted prices: only $19.79 for the softcover and $94.99 for the deluxe hardcover (the latter is almost a 40% savings).

Here's my instant recommendation: You don't really need to read any of the following if you're a fan of Disney animation in either its cinematic or printed forms, the Silly Symphonies, Mickey Mouse, or Donald Duck. Just go to the Amazon link above and buy this whopping, enormous, it's-so-damn-big-it's-hard-to-read, 350-page, you'll-get-lost-in-it-for-a-weekend, four-pound book. The publisher sent MousePlanet a copy of the softcover edition for review. After a quick perusal, I moved my cursor right over to Amazon.com paid $100 for the hardcover edition. You should do the same because there are only 1,000 copies of the more expensive edition and they'll probably sell out shortly.

Your next question (well, it was my wife's next question) is why would I spend $100 on another copy of a book I already own? Simple answer: this is a great book and an enormous bargain at almost any price. Where else can you find the original 124 cartoon pages which the Disney studios provided to Good HouseKeeping magazine from 1934 to 1944? Unless you're a collector with a lot of spare time, the answer is nowhere. And those 124 full-page reproductions comprise less than half the goodies in this book. (Disney animation and published stories are not my area of expertise, so please consider my comments those of an avid reader rather than an expert.) 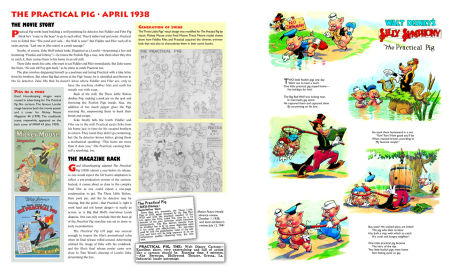 The genesis of the series can be traced to the success in 1932 of “Flowers and Trees,” the first of Walt Disney's Silly Symphonies to appear in color. It attracted the public's attention in a way none of the previous black and white Silly Symphonies had. To continue the history, I can do no better than to quote Dave Smith, Director of the Disney Archives, from his introduction to the book:

“The editors at Good Housekeeping magazine were among those who became enamored by the Walt Disney Silly Symphonies. They speculated that a Disney page in each issue of their magazine would be a big plus, so late in 1933, they made their first entreaties to Disney representatives. On Disney's part, the deal sounded too good to pass up, for they would have a chance to publicize their current cartoons in a major magazine that was reaching a subscription base of 2,250,000. A verbal agreement on December 1, 1933, confirmed by a letter, set down the parameters, Good HouseKeeping would pay Disney $500 each for twelve monthly pages consisting of condensed versions of the Disney Silly Symphony cartoons.”

I had seen reproductions of a few of these Good HouseKeeping pages in Robert Tieman's superb book The Disney Keepsakes (reviewed in September 2005 on MousePlanet), where a brief history was given and two pages were reproduced in facsimile. But the large format of the new book by Gemstone Publishing, 12.4 x 10.6 inches, enables the artwork to be shown in a size that enables you to see the wonderful details captured by artists Tom Wood, who drew all of the art from 1934 until his death in October 1940, and Hank Porter, who drew the pages from November 1940 until the series ended in September 1944.

The Foreword by editor David Gerstein, also the author of the voluminous supplementary text, explains why rhyming stanzas were used in the Good HouseKeeping pages, finding their genesis in the rhyming intertitles in Disney's earliest silent cartoons of the late 1920s. “By 1934, then, when Good Housekeeping magazine introduced the rhymed stanzas retelling cartoon plots, rhyme was already a form in which audiences expected Disney stories to be told. … That the Disney [Good Housekeeping] pages rhymed cannot have shocked readers. More shocking would have been if they had not rhymed.” 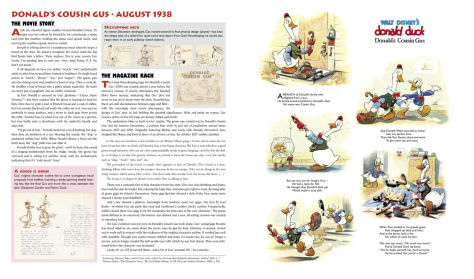 Less than a year after the series began in April 1934, it expanded to include other cartoons beyond just the Walt Disney Silly Symphonies. In January, 1935, Mickey Mouse in “The Band Concert” appeared in Good Housekeeping, and many other Mickey pages followed, joined by Donald Duck as his popularity rose.

When Snow White was in production, it was agreed that Good Housekeeping would run a serialized version of the story as a preview prior to the film's released over the course of several pages in two consecutive issues in November and December, 1937. This was repeated in 1939 with Pinocchio and in 1942 with Bambi. All three serializations appear in the book, with the Snow White story running 14 full pages with illustrations by Gustaf Tenggren.

Editor Gerstein divides his commentary for each Good HouseKeeping page into two parts. “The Movie Story” encapsulates the plot of the cinematic cartoon on which the Good HouseKeeping pages are based. “The Magazine Rack” details, among other things, exactly how the magazine comics differ from the cartoons because, of course, the plot had to be greatly condensed.

Now you have a pretty good overview of the basic contents of the book and their history. But what about all those other pages? This is where the editor and publisher have cleverly catapulted their project to another level. In addition to the Good HouseKeeping pages, all sorts of related animation and printed materials have been included (with some photographs of associated toys and games as well). One of the most interesting areas for additional materials turns out to be the differences between the Good HouseKeeping pages and the cinematic cartoons on which they were based. As David Gerstein explains, “Little preproduction material survives today from many prewar Disney cartoon shorts; when a given cartoon moved out of the storyboard phase into animation, the studio did not typically save conceptual art corresponding to dropped and/or altered sequences. … For the resource-deprived researcher, then, certain [Good Housekeeping] pages are nothing short of revelatory. Completed a year before its corresponding short, a Donald's Ostrich (1937) GH page features Mickey?who wasn't in the movie as released. The Clock Cleaners' (1937) GH page shows a cuckoo clock rather than the movie's Big Ben clone; and in so doing, reflects a lost gag sequence never seen on the screen. … One even finds GH pages representing cartoons that were shelved and never released. Donald's Elephant, The Delivery Boy, Movie Makers … the list goes on.” And so it does: page after page after page of images to tantalize the reader: model sheets, storyboard art, photos of maquettes, concept art, publicity drawings, and press book materials. 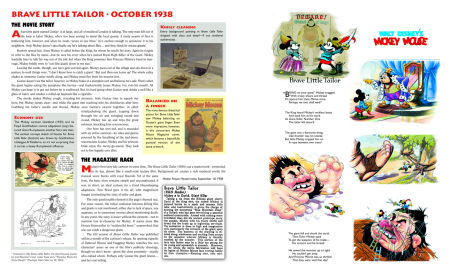 Also presented are pages from associated comics that used the Good HouseKeeping pages as inspiration (and the editor gives us the entire strip or story, which is nice), ads which used the artwork, factoids about other versions of the stories in books, magazines, on records, etc.

Walt Disney's Mickey and the Gang ends with the transformation of the Good HouseKeeping pages to “New Tales from Old Mother Goose as Told by Walt Disney.” These dozen pages, which occupied the Disney page for the final year, from 1943 to 1944, are charming retellings of Mother Goose rhymes with Disney characters and a witty spin. But, they are also a somewhat sad ending to the series.

Walt Disney's Mickey and the Gang is so large, and it's printed on such nice enamel paper, that the softcover version is a bit too big and heavy to handle and read comfortably without laying it flat on the table. Because of the soft cover, the enamel pages tend to slip and slide. The hardcover version is much easier to read on your lap while relaxing in your favorite easy chair and it includes the terrific bonus of 10 foldout pages which reproduce the original artwork at double the size of the book and in greater detail. You may wonder why these deluxe foldouts are randomly spread throughout the book and not near the pages dedicated to the cartoons they reproduce. I assume this is because they are machine tipped between the printed “signatures” (the 32-page sections in which a book is printed), and this the only economical way to do it.

Walt Disney's Mickey and the Gang gets my highest recommendation for the weeks of enjoyment and study it provides.

On another note, this finishes my current series of book reviews for MousePlanet: I hope you've enjoyed them. I've just been hired to write a book that will take my time for awhile, however I hope to be back with more reviews in the spring.