One of the classic symbols of the holiday season is toy trains racing underneath Christmas trees, although for many people, model railroads are a year-round hobby. And as we who are Disney fanatics know, much of the inspiration for Disneyland came from the model railroad Walt Disney built in his backyard.

During this holiday season, Southern Californians and visitors to our region can visit the Richard Nixon Library in Yorba Linda for "A Holiday Festival of Trains" exhibit, which includes more than 100 toy trains, as well as an extremely rare opportunity to see the very train that started it all: Walt Disney's Lilly Belle.

Since my husband and sons are train buffs as well as Disney fanatics, of course we had to visit.

The rarest piece of the exhibit that immediately drew our attention was, of course, the Lilly Belle, commissioned by Walt in 1949. Roger Broggie built the train and she ran in the Walt's backyard in Holmby Hills from 1950 to 1953. Prior to 2000, the original Lilly Belle and yellow caboose were on display at the Disneyland Main Street, U.S.A. train station. Since that time, though, it has been away from Disneyland, while a replica, built by Broggie's son Roger Jr., has replaced it. What is on display at the Nixon Library, however, is the real deal.

As you enter the exhibit and make your way counter-clockwise around the large central display, you first catch a glimpse of that classic 4-4-0 steam engine. Then as you approach, you see that this is much more than just the engine and caboose once viewed in a glass case. This is an almost full "consist" (that is, engine, rolling stock, and caboose) of the actual train that Walt rode through his backyard and around the studio, sitting on a trestle also built by Roger Broggie, Jr. 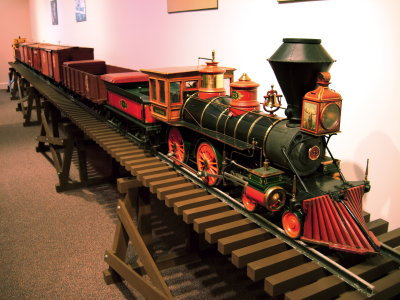 The Lilly Belle engine is displayed pulling four freight cars and a caboose.

Owned and kept by the Walt Disney Family Foundation in San Francisco, the train is not on public display, but instead is available for viewing only by private invitation at the foundation headquarters in the Presidio. In 2003, the Foundation loaned the Lilly Belle engine and caboose for display at the California State Railroad Museum in Sacramento. The Nixon Library exhibit is the first time in several years that the train with freight cars has been displayed (see footnote below). 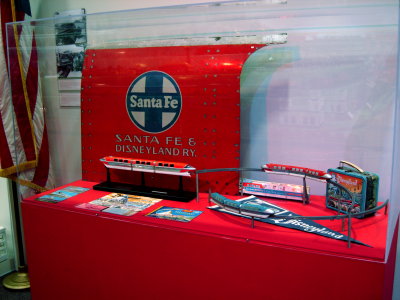 Former Disney Imagineer Bob Gurr loans one of the last remaining pieces of the original Monorail Red to the exhibit.

Of course, then-Vice President Richard Nixon himself represents a moment of Disney train history: In 1959, he and his family presided over the ribbon-cutting ceremony for Disneyland's brand new Monorail. Former Imagineer Bob Gurr has loaned one of the last remaining pieces of that original monorail train to the exhibit, giving visitors another rare opportunity to see this unique piece of Disneyland history. The monorail display case features vintage Disneyland souvenirs including Monorail Red and Alweg Monorail toys and photos from the ribbon cutting. 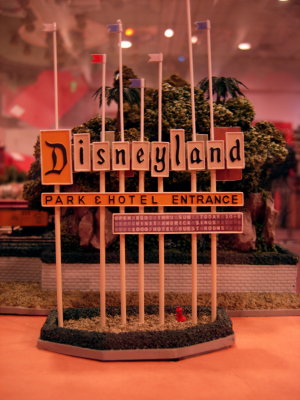 Other Disney touches fill the exhibit. Artist Bob Olszewski loaned his personal display of the Olszewski Disneyland in miniature pieces. The Los Angeles Live Steamers, headquartered at Griffith Park, loaned one of their passenger train cars, which has been cleaned and painted for the exhibit. The California State Railroad Thomas Shefton Collection loaned several display cases that house various model trains loaned by a large number of Train Collectors Association members. The collection includes several hundred engines and rolling stock cars from all the major model train manufacturers, and they cover very early models from the late 1800s to the tin plate models of the 1940s to the modern models. Of particular interest to my husband were all the Lionel Disney themed O-gauge trains from the 1970s to the present, and our children found two vintage model railroad handcars featuring very early versions of Mickey, Minnie and Donald particularly interesting. 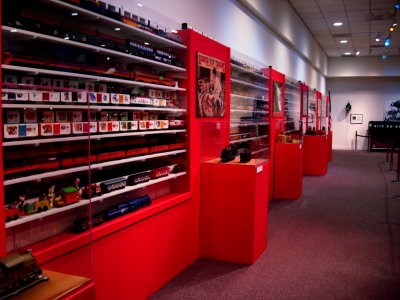 A tiered, 12-foot tall model railroad display dominates the exhibit room. The display holds 10 loops of model railroad tracks ranging from On30-gauge to G-gauge. Many of these are Disney-themed, including a G-gauge engine of the Disneyland Paris Railroad, a limited edition G-gauge Lilly Belle, and a new limited edition 1/24th scale model of "The General" engine from the 1956 movie, The Great Locomotive Chase.

Among the 100 Department 56 holiday village pieces decorating the model railroad landscape, Department 56 donated 30 pieces through the Downtown Disney store. Store manager Sue Wolf placed the pieces among the display herself. Museum docents have detailed information about the trains on display and members of the Train Collectors Association actively visit and maintain the displays. They are eager to share their love of trains and their passion for this project with visitors. Our 8-year-old son especially enjoyed watching and following all of the model trains. He wished he could get behind the scenes to find out how it all ran—I guess the apple doesn't fall far from the tree. 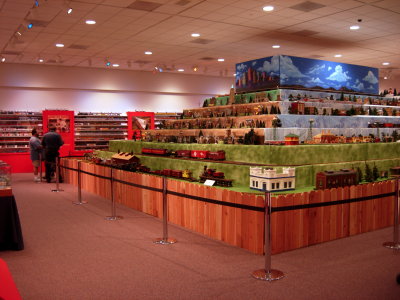 The Richard Nixon Library first approached Bob Lemberger of the Train Collectors Association to assemble an exhibit of holiday trains to fill the Special Exhibit Hall of the Library, located in Yorba Linda, California. Several months later, Lemberger has coordinated and executed a collaboration of the Train Collectors Association, Michael Broggie and Michael Campell with the Carolwood Pacific Historical Society, the Walt Disney Family Foundation and several others to assemble an impressive exhibit that features a wide array of model railroading trains and memorabilia, including significant pieces of Disney train history.

The Richard Nixon Library & Birthplace is approximately 12 miles from Disneyland. You have several weeks to visit now through Sunday, January 7, 2007. Out-of-town visitors planning a holiday vacation at Disneyland may consider a side-trip to visit the display.

Before his death, Ward Kimball donated much of his personal collection, money and manpower to the Orange Empire Railroad Museum in Perris, California. One of Disney's famed "Nine Old Men," Ward was responsible for influencing Walt's interest in trains and model railroads. Ward underwrote the Grizzly Flats Barn at the Museum, which houses pieces of his collection, as well as the museum's turntable. [You can read more about the museum and Ward's collection there from one of our previous MousePlanet articles here.] This holiday season, the OERM will have a Santa train the weekends of December 9-10 and 16-17. The museum will be running a full-size steam locomotive for the December 9 and 10 events. See the Web site for more information. 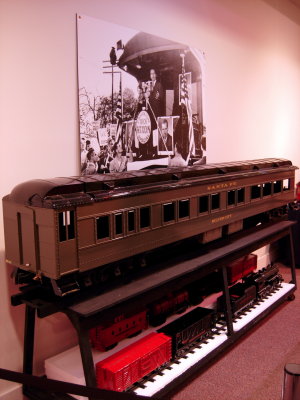 The Los Angeles Live Steamers loaned this train car to the exhibit.

In Los Angeles, Griffith Park houses Walt's Carolwood Barn, maintained by volunteers from the Carolwood Pacific Historical Society. The barn is open to the public every third Sunday of the month. While you're visiting Griffith Park there are several train attractions in addition to Walt's barn. Now through December 23, Travel Town offers several evening train rides to visit Santa. Click the link for more information. The Griffith Park and Southern Railroad runs train rides daily, year-round, except Christmas Day, as does The Travel Town. The Los Angeles Live Steamers Museum also free train rides each Sunday from 11 am to 3 pm.