Vacation photo memories are very special treats themselves; when you combine them with the magic of Disney parks and the holidays, you get some great images to share with family, friends, and our MousePlanet readers.

A few weeks ago, we asked our readers to share their favorite Disney holiday pictures with us and the response was huge! We received pictures of park scenery, holiday displays, family, friends, and some special characters from Disneyland and Walt Disney World. The one overall theme we saw in these pictures was "magical moments."

The staff at MousePlanet voted on these submissions and, after a great deal of consideration, we decided on the following pictures as the winners of our holiday contest. Each winner will receive a new Disney DVD courtesy of Buena Vista Home Entertainment. It was a tough choice and even though the following pictures were selected as winners, there are many great "honorable mentions" that are very good (and we'll be sharing those next week).

As a professional photographer that has taken literally thousands of pictures at both Disneyland and Walt Disney World, I was totally impressed with the quality and techniques I saw in these pictures (maybe these winners all read my "Photo Tips" series?). The camera angles, the subject matter and the story that was told in these still images are fun to view and each share a memory!

Here are the winners of the MousePlanet Holiday Picture Contest - enjoy! 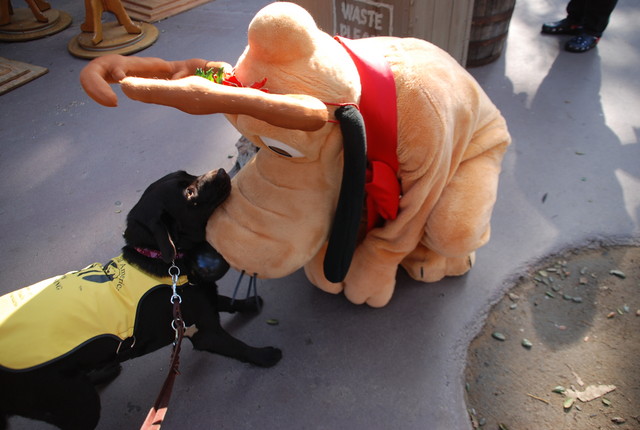 "I am Oceana, a Guide Dog Puppy in training, and I like to tell you about the great time I had at Disneyland's 'Santa's Reindeer Roundup'. My raiser was taking my photo again when I spotted my very best friend, Pluto, and got all distracted but I stayed put. My raiser then took me over to say hi to Pluto and let me play with him. I would pounce him and he then pounced me and back and forth we played like this till my raiser said that was enough. She is such a spoil-sport, so both Pluto and I got up and shook off the play. I said goodbye one more time to Pluto and off we when to say hello to Santa. I told him my Christmas wish is to become a guide dog for someone who needs me. Santa told me that if I work really hard that I just might someday be a guide. Oh, I do hope so!"

Frank's thoughts: A nice moment in time captured in this image. This photo tells a little story in just that split second. Even though there are no 'humans' there - you can feel the bonding emotion between these two characters that we can all relate to. I like the warm, innocent story that this image conveys. 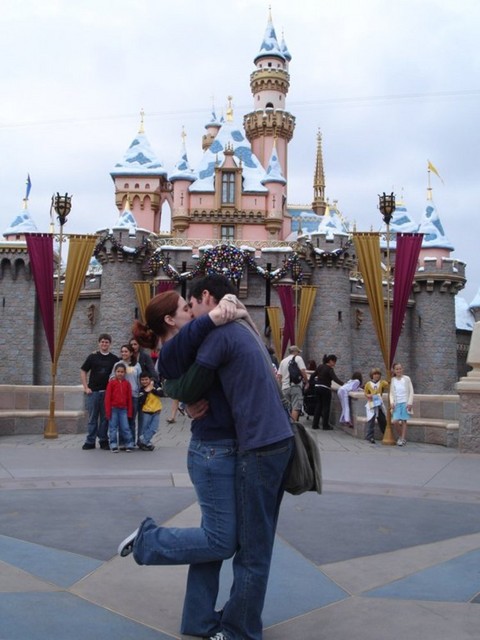 "This was her first trip to Disneyland (November 11, 2007), and was certainly my favorite. After knowing each other for six years, we finally became a couple. After the picture was taken she asked me where else in Disneyland would make for a romantic kiss. I led her to Snow White's wishing well (of course). We were there for a few minutes but the song didn't play. I thought maybe it wasn't working that day and decided to just forget the song and kiss anyway. The moment we did, the castle bells rang. She said how amazing it was that our kiss set off the bells. Then we just held each other as Snow White sang her song. It was, without a doubt, the most magical moment I have ever experienced at Disneyland, and I've had my share of magical moments."

Frank's thoughts: I have seen so many pictures of people standing so straight and posed at the castle, this was refreshing. The photo gives you a sense that they were all alone in their special moment, (yet surrounded by the park guests). Thank you for sharing your tender moment with us! 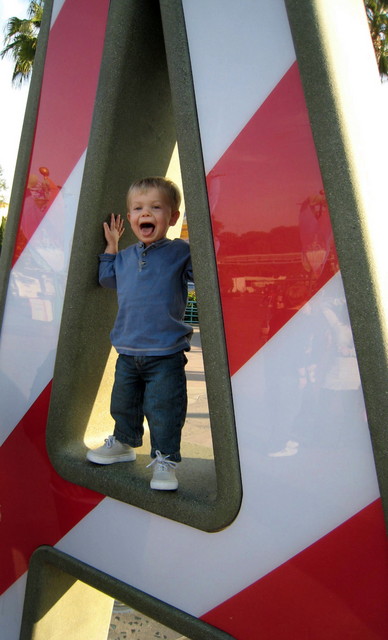 "...our son A.J.'s first trip to Disneyland. Although he was only 20 months old, it was a wonderful experience we will never forget!"

Frank's thoughts: Nice camera angle. I'm glad you got in nice and close to your subject. Some would try to get the entire "A" letter in the photo and the child's expression would have been lost being such a small part of the overall picture. You can see that natural kid's energy in A.J.'s face! Good job! 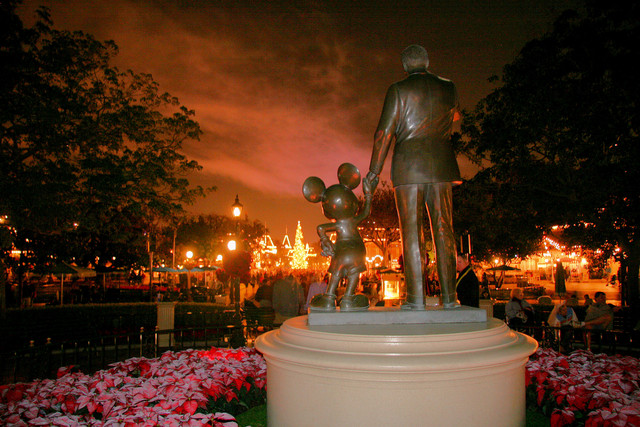 "Photograph of Main St. from behind the Partners statue."

Frank's thoughts: VERY nice picture. I am impressed with the exposure of the statue (not too washed out with your flash) against the darker Main Street holiday lights. You can see the story of this picture - Walt and Mickey watching over the holiday guests. Great photo, nice composition. 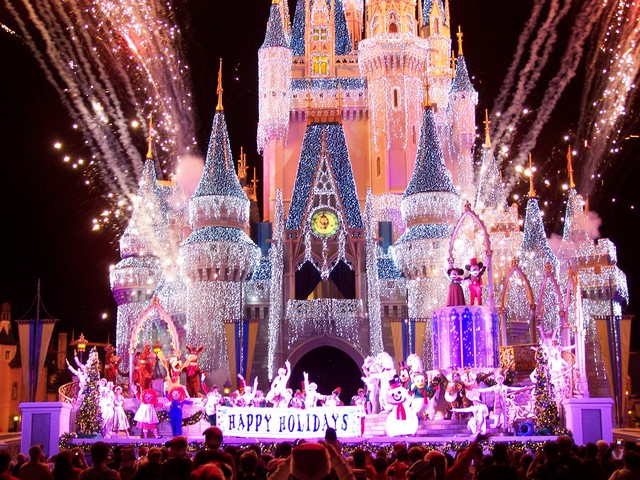 "This photo was taken at Mickey's Very Merry Christmas Party on Thursday, December 6. A friend was in from out of town and we attended the party and saw the last 'Celebrate the Season' show before we left the park. I took a few pictures, but this one was just magical. I love the way it seems to sparkle! A magical end to a magical time."

Frank's thoughts: This is a great example of how to shoot night time pictures at WDW. Cropping in close helps the camera meter the exposure, waiting for the peak of action to trip the shutter minimizes the blur you would get from a slow shutter speed. Just a nice picture all the way around! 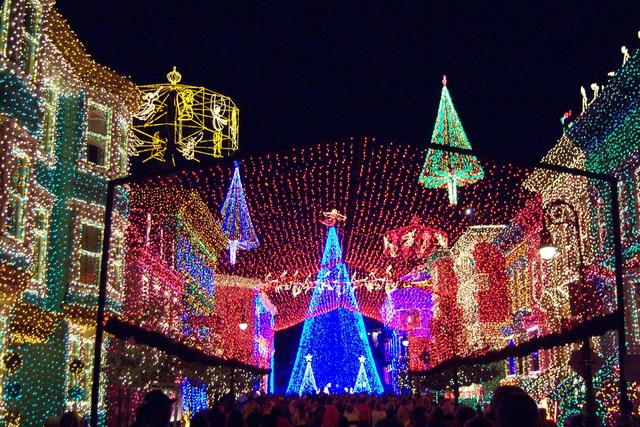 "I was at WDW with friends during the week of December 3-7 to celebrate a milestone birthday. You will probably be sent numerous photos of the 'Osborne Family Spectacle of Dancing Lights' show from Disney-MGM Studios, but I thought I'd send one nonetheless. This vantage point seemed to encompass the impact of the light show visually, and proof of its popularity by the packed crowd in the Streets of America."

Frank's thoughts: Another great example of night time photography. By filling the frame with as much light (even if they are all in little bunches) really helps that camera exposure. Nice job of holding the camera steady! I can't wait to visit WDW and see the light display for myself! 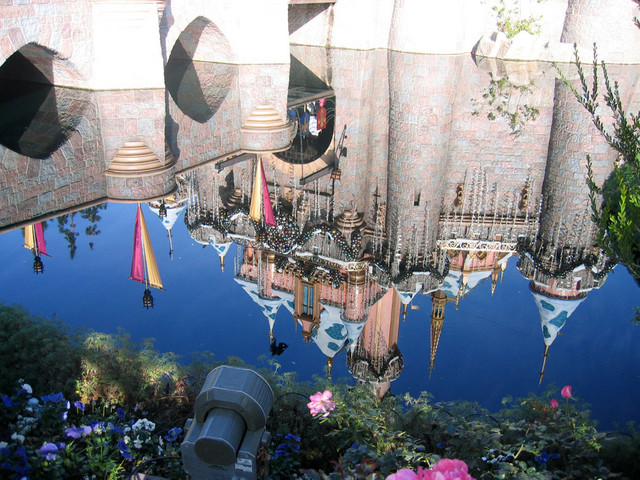 "I'd already had shots of the front of the Winter Castle from a visit I made a month earlier, and other guests were filling up that area taking their own shots. I meandered around the sides of the castle to see how the castle looked from there, and instead saw the crisp clearness of the water surrounding the castle - it drew all my attention."

Frank's thoughts: I am amazed about how absolutely still the water was here in this picture. A perfect reflection! The composition is nice too - the curve of the water naturally draws your attention to the reflected castle. I'm glad you had your camera to capture this image!

Capturing holiday memories with your photography - the main thing to remember is, there is never a bad picture - just some are better! We want to thank our readers that shared their Disney experiences through their photos. Next week, we will bring you the pictures that received the status of "honorable mention".