Last week, we shared the winning photos of the MousePlanet Holiday Picture Contest (link). This week we'd like to share the "Honorable Mentions".

We received wonderful photos of park scenery, holiday displays, families and friends as well as some special characters from both Disneyland and Walt Disney World. The overall theme we found in these pictures was ?magical moments?. The staff at MousePlanet voted on these submissions and after a great deal of consideration, decided on the following pictures to be the Honorable Mention winners of our holiday photo contest.

As a professional photographer I have taken thousands of pictures at both Disneyland and Walt Disney World. I was impressed with the quality and techniques I saw in these pictures (maybe these winners all read my "Photo Tips" series?). The camera angles, the subject matter and the stories that were told with these still images are fun to view and each share a wonderful memory!

Here are the Honorable Mention Winners of the MousePlanet Holiday Picture Contest. Enjoy! 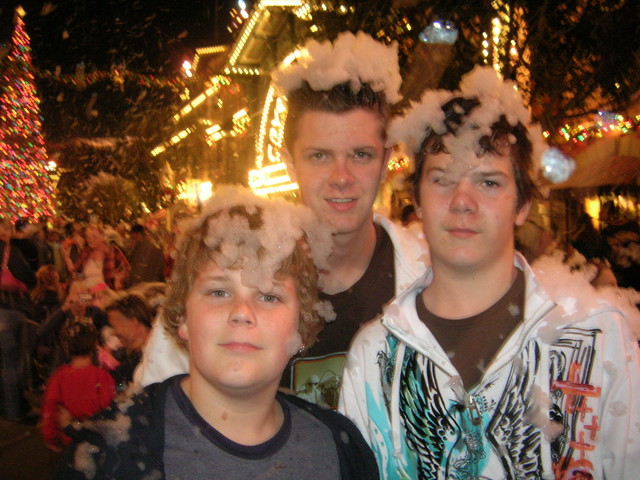 Thanks for all your hard work at MousePlanet as this is how we keep updated between visits.

Frank's thoughts: Family faces in the middle of all the Disney snow! This picture gets in close to show those faces and yet there is just enough background to help set the mood of the picture. The photo says ?Disneyland holiday fun!?. Nice job! 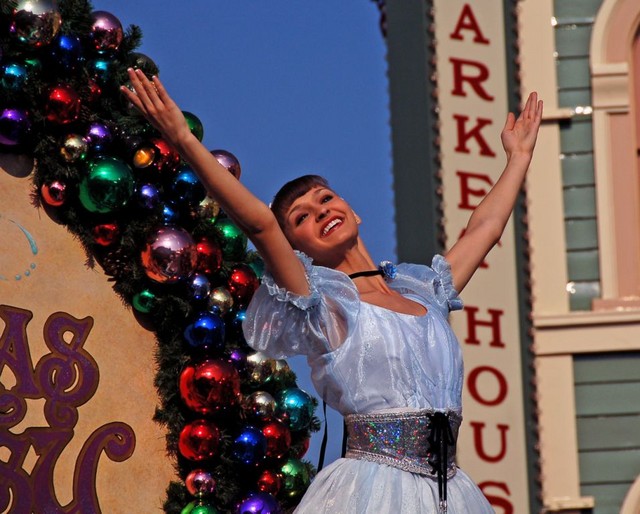 We surprised our kids with an early start to Christmas when we attended the taping of the Christmas Day Parade at Disneyland. We can hardly wait for Christmas morning to see if our family made it into the final cut of the parade or the High School Musical segment. The photo was taken November 10, 2007 on Main Street at Disneyland.

Frank's thoughts: You captured a great moment here with the parade cast member at her peak of smile and emotion. The exposure is really good with no harsh sun or shadows. 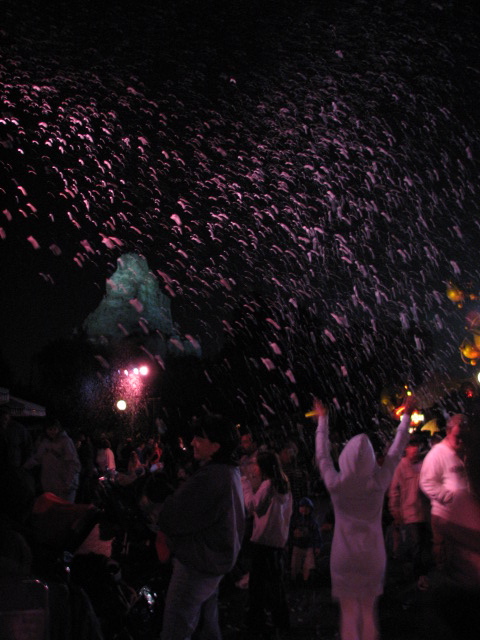 It was the first day of our Disneyland Thanksgiving vacation and we were walking down towards the castle. We were so excited to see how gorgeous it was with the icicles and snow that we completely forgot about the "real" snow that falls on Main Street. So it caught us off-guard when it actually began to snow! My nineteen year old sister happy as a 5 year old exclaimed, "YAY! It's snowing!". I quickly took out my camera and snapped a shot of her as she ran away to play, swinging her arms up towards the falling snow. The Matterhorn in the background adds a nice little touch to remind us where we were enjoying a holiday snowfall.

Frank's thoughts: The composition of this shot is really nice. The the snow flurries come from the left which draws your eye to your excited sister on the right. The blurred snow gives a sense of motion. What a wonderful moment to capture. Walt once said, "you are never too old to enjoy your childhood!" Great shot! 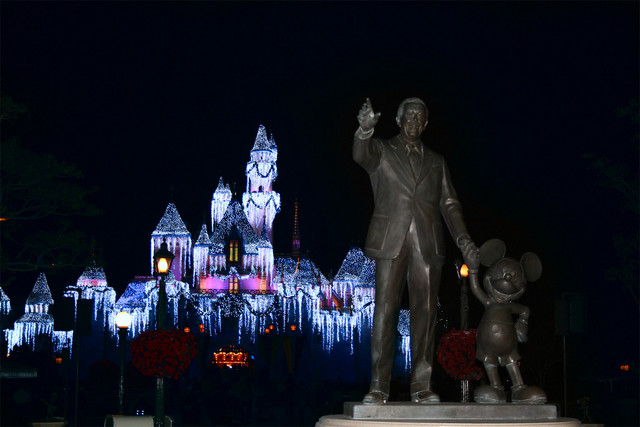 I had just finished riding 'it's a small world' seeing the new holiday overlay. It was 12:15 a.m. and the park had just closed. I left through the castle and noticed it was fairly deserted so I had to stop and take a few pictures.

Frank's thoughts: This is a great reminder to watch for photo opportunities as you are leaving the park. What a great way to see the castle and Partners Statue with nearly no one around! Walt and the castle - nice combination of foreground and background! 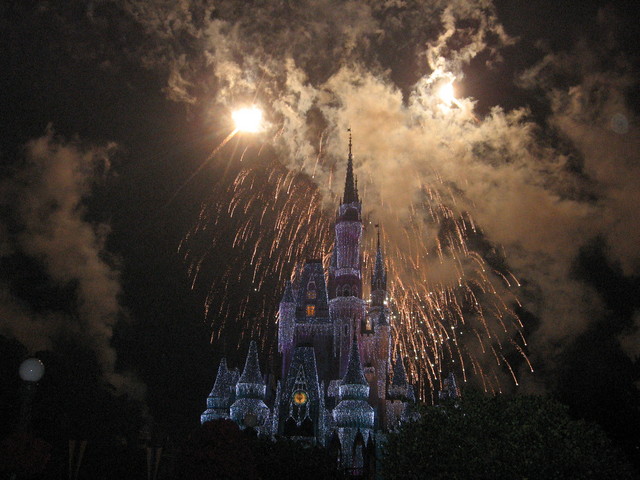 We stayed in the park to watch 'Wishes' and my husband got this amazing picture. This trip was special as we surprised our kids as well as friends that were already vacationing in WDW. We had an AWESOME time. This picture was taken on November 30th 2007.

Frank's thoughts: Great fireworks shot! The motion of the firework streams against the sharp lights on the castle. This is a good example of taking a fireworks picture where the burst is not at the initial peak of brightness. Very effective! 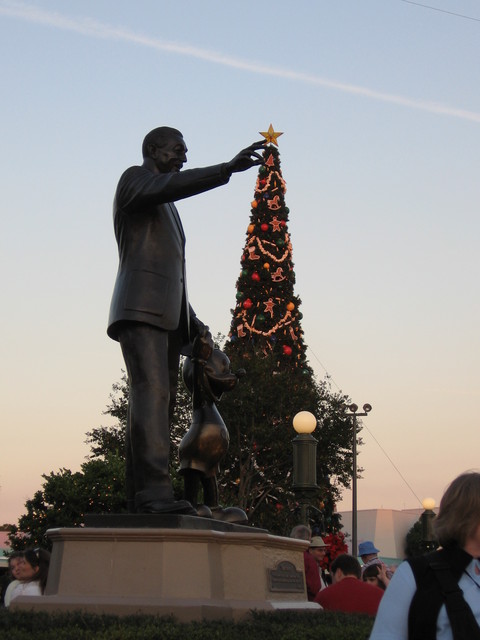 Last December I took my first trip to Walt Disney World for my birthday. My mom and I headed for the Magic Kingdom first thing. The Christmas tree had still not been moved after the parade taping and I managed to get a photo of Walt placing the star on the top. What a great introduction to the World! When we went back the next day so I could take another one in full daylight, the tree had already been moved!

Frank's thoughts: An interesting angle to combine the foreground image and the background image to tell a fun story. I'm glad you had your camera with you and took this shot! As you said, it was gone the next day! 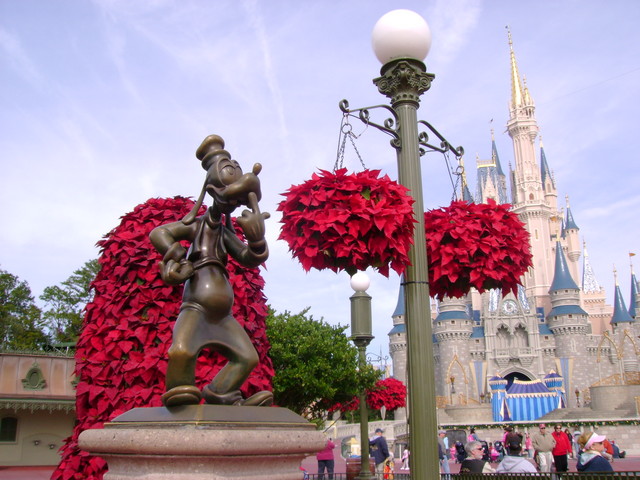 Goofy in the center court with poinsettias and the Castle.

Frank's thoughts: I like the way Goofy is centered with the red color behind him (it attracts the eye and makes Goofy stand out). You used the ?rule of thirds? by dividing the Goofy, the center lamp post and the castle in your composition. Good shot! 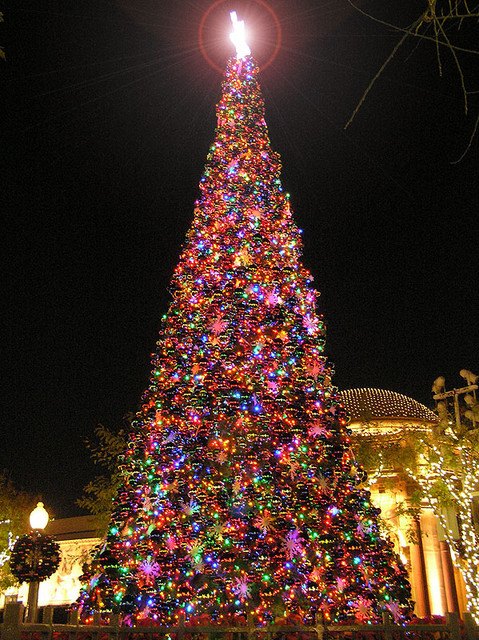 This photo was taken on December 3rd, 2007 at around 9:05 pm, just a little after park closing as we were leaving. I personally love this photo I took because I was there with my entire family for the weekend and it just reminds me of the great time that we all had, being filled with the Christmas spirit being at the [Disneyland] resort, and of course the Disney magic around the holidays.

Frank's thoughts: Wonderfully colorful photo! I like the way the tree topper sparkles. Good job at holding the camera steady too, the photo is nice and crisp! Did you find the Hidden Mickey in this tree when you where there?

Vacation photos make for some wonderful memories and are a special treat any time of year. When you combine those memories with the magic of the Disney parks during the holidays you get some great images to share with family, friends, and our MousePlanet readers! When collecting holiday memories with photography - the main thing to remember is there is never a bad picture, just some are better than others. Take a lot of pictures and maximize your chances for that perfect Disney memory!

We want to thank our readers that shared their Disney experiences through their photos.