It's now January 2007, and perhaps you've made a New Year's resolution to try to lose some weight or get in shape. But for over 30,000 people (some of whom may have made New Year's resolutions a year ago), this past weekend was a culmination of a healthy 2006 as they participated in the 2007 Walt Disney World Marathon and Half-Marathon. 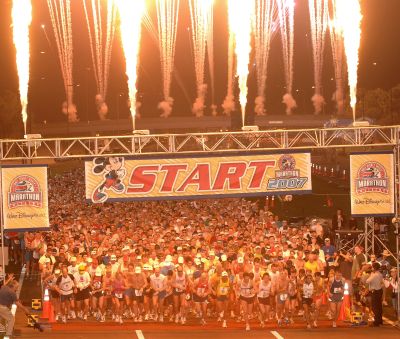 Pyrotechnics light the sky at the start line at 6 a.m. Jan. 7, 2007 to mark the beginning of the Walt Disney World Marathon in Lake Buena Vista, Fla. A record 16,000 athletes registered for the 26.2-mile trek through all four Walt Disney World theme parks. (Mark Ashman, photographer)

If you were, congratulations! A few of our MousePlanet staff participated as well, including Mailbag editor Stephanie Wien (who ran her first marathon) and columnist Mike Scopa (who did the half). You won't see me on this list. For various reasons (lack of training being primary), my husband and I went to Orlando this past weekend and even picked up our running numbers at the expo... but in the end, we gave it a pass. [We haven't given up, though; we still plan on running in the 2007 event.]

The WDW event continues to grow, with organizers tweaking it with various changes. This year, the big change was in the starting area. Instead of the corral format they had been using for many years, they instead went with series of "wave" based on predicted finish time. Not only did these waves have staggered starts, but some of them took a slightly different route at the beginning of the course to reduce congestion in the most crowded portions of the run. This was the second year in which the half and full were held on separate days (with the family 5K fun run held on Friday, making the three notable events span the course of three days).

But the WDW marathon weekend isn't the only expansion. This past September saw the inaugural Disneyland Half-Marathon in California, and organizers continue to develop and promote other endurance events throughout the year.

Today's installment of the marathon guide looks at what's to come in the coming year.

This 5K (3.1-mile) course has a wonderful course, if you like Epcot. It starts in Future World, then goes around the perimeter of World Showcase, and back to Future World. This course is actually a considerable improvement over the old Family Fun Run course they held on marathon weekend, which included a lot of distance around the Epcot parking lot (which is not nearly as scenic).

If you enjoy Roller-blading and want to try something a bit different, sign up for either the half or full marathon. The half-marathon out-and-back course goes through Disney-MGM Studios and Epcot, and the full marathoners get to do it twice.

There is no actual "Minnie Marathon," but instead the weekend consists of three separate events:

Note that if you raise at least $150 for the cause, you get a free one-day park pass.

The main event is the Women Run The World 15K. At 9.3 miles, it's a terrific distance for an event with a great cause. This course starts near Animal Kingdom, goes through Disney-MGM Studios, passes through Boardwalk before winding up in Epcot. It's not restricted to women entrants, either. Just ask MousePlanet writer Mike Scopa. The finisher's medal is a very cute Minnie Mouse-shaped medallion that is smaller than the marathon medal.

Disneyland will have its second half marathon, after hosting its inaugural event last fall. For 2007, Disney has moved the event forward to Labor Day. I suspect this was Disney's effort to encourage people to participate in the event as part of a summer vacation trip, although I think it was not a wise decision. Labor Day weekend itself marks the end of the busy summer season. Traditionally, many people travel on Labor Day itself to get home; participating in this event would more than likely mean taking an extra vacation day and leaving for home on Tuesday. At the same time, the weekend experiences very large local crowds. In addition, early September is often still quite hot in Southern California, which means runners need to be extra careful about staying hydrated during the event. The finisher's medal for the inaugural event last year was in the shape of Sleeping Beauty Castle. [I've given it considerable thought (having registered for a Disney run every year for five years now), I have decided to skip the 2007 Disneyland Half Marathon, because I wish to avoid the huge Labor Day weekend crowds.]

If you want to pack more than your inline skates and want to be pretty serious about doing a multi-staged event, this one might be for you. The triathlon consists of a 1.5K swim, a 40K bike ride, and a 10K run, which is considerably shorter than the full-blown Ironman competition.

Be warned, this is a much smaller event, and the logistics seem to be a little cumbersome based on field reports from past participants.

Disney's Race for the Taste 10K

This race is one of Mike Scopa's favorites, and it's really no wonder. The event was recently rethemed and tied to the popular Epcot International Food and Wine Festival; for those who like to attend this very popular festival who also want to get a little exercise in their trip should really enjoy this. An extra treat is that participants can register and purchase a theme park ticket for a combined price that provides a substantial savings, and the participant is even allowed to purchase additional admission media. Have a nice jog in the morning, then spend the rest of the day sipping wine and sampling international cuisine. On top of all that, the finisher's medal is arguably one of the cutest of the lot, and includes a couple of dangly miniature eating utensils. How can you go wrong?

The Walt Disney World marathon events are still the crown jewels of Disney fitness events. By breaking the family fun run out to Friday, they now have three solid days of activities for a hallmark weekend. The Goofy event (completing both the half and full on a single weekend) continues to gain in popularity; who knew there were thousands of crazy people who wanted to volunteer to endure such a feat? Be aware; although the Goofy registration covers both endurance events, there are additional goodies (including a third shirt and medal) that make the entry fee pretty expensive. At $225, it is a serious dent in your vacation budget, especially if more than one person in your party is entering. The finisher's medals are in the shape of mouse ears (for the full), Donald (for the half), and Goofy (for the Goofy Challenge). The iconic medal is the Mickey-shaped medal; both the Donald and Goofy are not as easily recognizable, although those who complete the Goofy get to pretend to be Mark Spitz on Monday morning (I think I just dated myself).

Warning for the 2008 event: In 2008, Disney celebrates its 15th anniversary marathon. Disney is already making a big to-do about its "top secret" finisher's medal, which they are describing as exclusive and not available for public display until race day. I have a sneaking suspicion the 2008 WDW marathon will be extremely popular, and will sell out faster than it has in many years. For this reason, I strongly urge you to register now. Do not delay or you will risk being shut out from registering. Traditionally, the marathon registration fills up in late summer. I wouldn't be surprised if it fills up by May.

A thank you and goodbye, for now

If you love the Mouse and are giving yourself motivation to get (or stay) fit for 2008, there is no shortage of events you can sign up for. A trip to Walt Disney World might be a terrific reward for losing a lot of weight, and incorporating a running event will keep your fitness goals in mind and your waistline in check. Over the years, Disney has continued to make improvements and add new fitness event offerings. From a short 5K to a 26.2-mile marathon, you have your pick of what—and when—you want to go.

This article concludes our monthly publication cycle for the Marathon Guide. We plan to continue writing about health, fitness, and endurance events, just less frequently. I hope you've enjoyed our coverage these past two years, and I thank you for all the great emails you've sent me about your experience "running Disney." Now put on your running shoes and let's head out for a jog!