There is no doubt that Fred Block is one of those who "gets it." How else could the founder of Dismeets pull off such an unbelievable event last weekend in Allentown, Pennsylvania?

On Saturday, July 15, Block and his amazing crew of volunteers saw a year of hard work culminate into an amazing day of Disney magic. Some 350 Disneyholics came to his annual Dismeets Fan gathering, sort of a Mid-Atlantic, mid-July Mini-Mousefest.

This all took place in Allentown, where for about 36 hours the Crowne Plaza Hotel ballroom was a bastion of electrified Disney energy.

I hope those 350 attendees realize how lucky they were to attend this year's festival. You see, Block had to turn away over 300 requests for tickets. He simply did not have enough room.

This event has grown tremendously in popularity. What was once a small gathering of 40 Disney fans has now turned into an annual meeting that someday may see well over 1,000 or so Disney fans loading up Block's in-box with requests for tickets.

Regardless of whether you were a fan of Disneyland, Walt Disney World, or the Disney Cruise Line, this was the place to be. This is where you could sit down with other Disney fans and talk about your favorite attraction, character, movie, or anything else that's important to you in your love for Disney.

Block, a mountain of a man with a heart to boot, puts that heart and soul into an event that brings Disney fans together to enjoy their celebration of Disney magic.

For Block, this was very much a labor of love, with attendees ranging from a 2-year-old on the tether playing with the hidden Mickey confetti to the septuagenarian who came for information to help her plan her first Mickey's Not So Scary Halloween Party.

Block is not one to take credit. He quickly thrusts his all volunteer crew and guest speakers into the spotlight and said, "They are the ones who make this work… No one came to see me; they came to see my speakers."

However, it was Fred Block's lead that everyone followed and without that leadership and class, this meet would not have been so successful; a success Block measures by the smiles he sees on the faces of all who stepped into that ballroom. Block is also quick to point out that all his volunteers and speakers paid their way to the meet. That is, everyone purchased their own ticket and paid all their travel expenses. 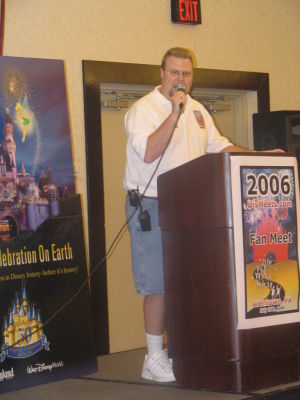 A Meet and More

When you think of a Disney fan meet, what do you think of? A group of Disney fanatics who come together to talk about their love of Disney. Maybe they are online friends who wish to meet face to face and perhaps enjoy a meal together. Maybe it's even an opportunity to do a bit of pin trading.

This meet, however,was much more than that, with many speakers who came to share their own flavor of Disney magic. 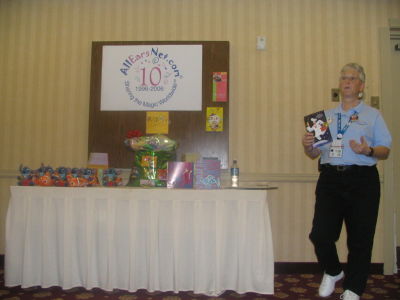 There was Deb Wills of AllEarsNet.com talking about the Food & Wine Festival; John Rick of the Central Jersey Pin Traders discussing pin trading; Chris Carson pointing out trip-saving tips from his "Disney on a Dime" book; Dave Marx of Passporter talked on Disneyland and also of the Disney Cruise Line.; Steve Barrett of "Hidden Mickey's" fame shared some Hidden Mickey's with the fans; Annette Owens pointed out the benefits of having a WDW trip planner help you plan your vacation, and so much more. 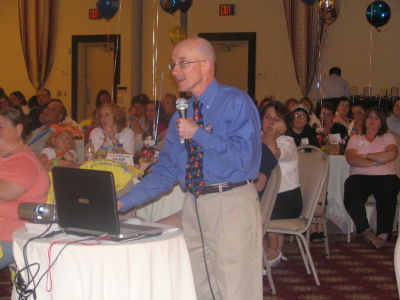 Oh yeah, and some guy named Mike Scopa, who also was there to address the throng on the subject of Disney magic and on holiday parties at WDW. 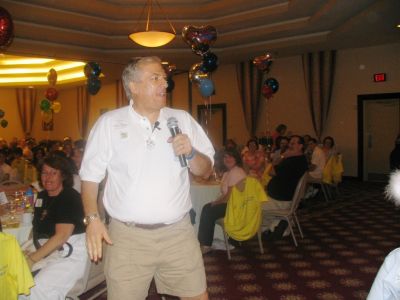 Also, thanks to the efforts of the WDWTODAY podcast team, led by Mike Newell and Matt Hochberg, the meet was broadcast live on the Internet. 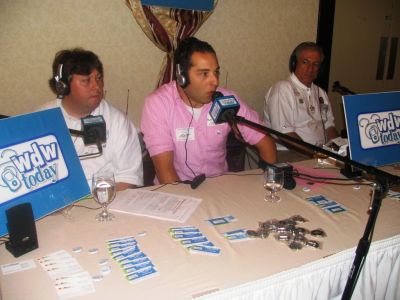 The crew of WDWTODAY takes calls on the air. Photo by Lisa K. Burton

There was so much going on that not only that three extra breakout rooms were made available in addition to the main ballroom to cover as many topic sessions as possible.

From the moment Fred Block was introduced (virtually—I might add—by Kelley Koffey who sings "We Go On" and "Promise" from Illuminations) the Crowne Plaza was in for a magical day.

The ballroom was festooned with Mickey balloons, Disneyland and Walt Disney World balloons, huge posters on the Happiest Celebration on Earth, Mickey Mouse Centerpieces on all the tables, Disney music playing through the sound system, and a ton of smiles on everyone's faces. The crowd represented Disney fans from 12 states that had come to see other fans and share in their love for Disney.

The highlight of the weekend for me was the silent auction. Organized by Lou Mongello (of WDW Trivia fame), 100 percent of the money collected was earmarked for the Starlight-Starbright Children's foundation (link) to sponsor a child's wish to go to WDW. While we had hoped to collect enough to send on child and his/her family, that number will cover the cost of two families.

Lou and the volunteers were hoping for a modest amount to be raised for the Starbright Foundation, but they guessed wrong. At the end of the day Mongello stood up and with a lump in his throat, thanked everyone in the ballroom for their generosity, and held up a white board with "$3,822" written on it to indicate the total raised. Everyone was so moved by the generosity shown by all in the room it truly was a testament to the Disney magic theme that was present all day.

Throughout the day, the Disneyfied ballroom and breakout rooms were filled with smiling Disney fans. They did not have to be on Splash Mountain, Soarin', or Expedition Everest to be happy and get that Disney feeling.

At the end of the day I asked Fred Block about the day. Block was astonished at how well everything went, and gave all the credit to his crew of volunteers, with special thanks to Colleen for all her effort. "The key to this year's success is the total volunteer effort," he said, noting it was difficult to single out just one of his volunteers.

One of those volunteers, Art Valentino of Sayreville, New Jersey, said, "The ballroom was filled with all nice, friendly people. Who wouldn't want to volunteer to work for such a turnout of special, special people?"

The sponsors for the meet donated so many prizes that no one walked away empty-handed. Everyone left with a shirt, a button, a pin, a book, tickets to a baseball game, free limo service, a few days in one of Orlando's All Star Vacation homes, and a number of other giveaways.

After doing this for several years this was the first year that Block was able to actually sit down and enjoy the day himself.

He won't have much time to rest. The first order of business is to answer all the e-mail he'll receive from people thanking him for the wonderful time they had. That should take a month or two. Then it's time for Block to open up the plans for Dismeets 2007. There's only one problem—how can he top this year? He will because his heart is filled with Disney magic… and Fred Block is all heart.

It's time again to talk Walt Disney World Trivia and I'm going to tell you how to stump your friends.