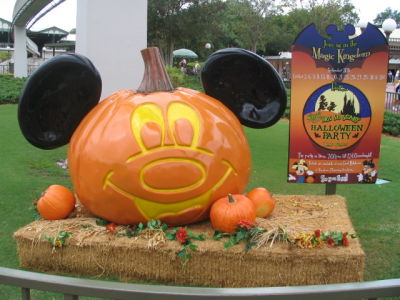 I know what you're thinking. You're saying, "Hey Mike, aren't you early with this Halloween stuff?" Nope!

Starting tonight, the Walt Disney World resort, specifically, the Magic Kingdom theme park, will be holding the first of 18 special ticket events known as Mickey's Not So Scary Halloween Party.

I know its September 15 and you haven't even thought about purchasing your Halloween candy, but Mickey has. He is celebrating early and often this year.

In this session, let's look at the 2006 edition of Mickey's Not So Scary Halloween Party and give you some guidelines as to how best to do this fun time in the park.

What is Mickey's Not So Scary Halloween Party?

This is a special hard-ticketed event held on certain nights from September 15 through October 31, 2006 at Walt Disney World's Magic Kingdom theme park. You do not need regular park admission to attend the party, but you must purchase a special ticket to attend the party. We'll get into specifics later on, but it's important to remember this party requires a separate admission.

The purchase of a separate ticket for the event this tells you that the Magic Kingdom will close early on those dates the party is held.

If you visit the Magic Kingdom that day but do not plan on attending the party you may find it best to arrive around park opening. You can then enjoy a full day in the park. You should also plan on leaving the park before 6 p.m.

Each guest attending the party receives a wristband that identifies that guest as a party guest. These wristbands are placed on the guest's wrists. Guests already in the park receive wristbands at various locations throughout the park, notably in the Town Square between the Firehouse and City Hall. Guests who do not have wristbands must leave the park.

That breaks down to four Mondays, four Tuesdays, four Thursdays, and six Fridays. Interestingly, there is no party on Friday, October 13. Is someone superstitious?

Admission prices for Mickey's Not So Scary Halloween Party are:

If you are either an Annual Passholder or Disney Vacation Club member, you can get 10 percent-off tickets for September 15, 22 and for October 2, 16, 17, 23 and 24. Those discounted tickets are priced at and $35.10 ($27.64 for ages 3-9). If you are planning a trip and are looking to attend the Mickey's Not So Scary Halloween Party, you may want to take note of those discounts.

So now that we have the dates, prices and discounts out of the way, let's talk about Mickey's Not So Scary Halloween Party and how to best enjoy that evening.

Preparing for the Party

A day or two before your party night, visit the Magic Kingdom's City Hall and ask for a Mickey's Not So Scary Halloween Party brochure. You should become familiar with the schedule, especially for the parade and the fireworks. You should also take note as to where the Halloween goodies are and plan your night in the park accordingly.

Also, the night before the party, I would suggest visiting a park that is offering an Extra Magic Hour evening and take full advantage of that evening. Of course you must be staying on WDW property to do so.

Sleep in on the morning of the party. It will be a late night. Spend a leisurely day in either MGM Studios or Disney Quest in Downtown Disney (while it is still around). Neither of these places get moving until 10 a.m. so you can sleep in late.

Try to enjoy an early dinner on the day of the party. You don't want to find yourself eating during the party as you may miss out on some festivities. Schedule your dinner about 2 hours before the start of the party.

On the day of the party I usually visit a park other than the Magic Kingdom and return to my resort room late afternoon to get ready for the party. This could mean relaxing for an hour or two before heading out to the park about an hour before the party is supposed to begin and also having that early dinner.

Also, if I'm attending the party I'm probably going to wear some type of shirt that has a Halloween flair to it. This year, I have a Mickey ghost shirt.

You are encouraged to wear costumes but remember that safety comes first, so be sure that if your children are wearing costumes that they are comfortable. You are, however, asked not to wear masks. It's dark and the little goblins need to be able to see where they are going. Also, there needs to be a distinction between guests and those Disney employees who are working the party.

The Magic Kingdom toll plaza will have a Jack-o-Lantern or two on the roof indicating that there is a party. The Main Street USA train station will have an eerie look to it. There will be dark lighting and fog and spooky music awaiting the guests. 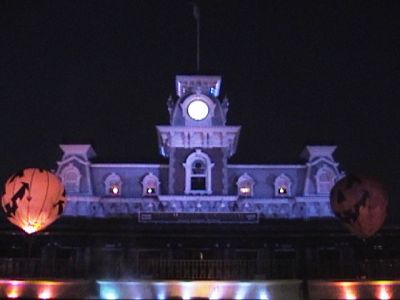 If you love green, orange, and purple lighting, then you're going to love Main Street USA.

When you emerge from under the train station, you find the town square to also have a different look to it. All the street lamps are green and there are huge luminaries in the square. 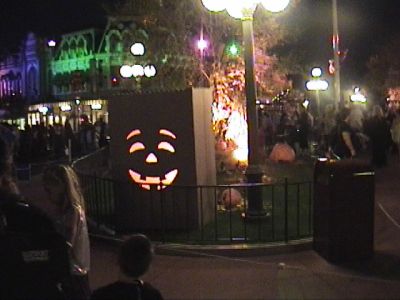 A luminary greets guests as they enter Town Square. Photo by Mike Scopa.

Main Street USA has quite the different look. Beyond the green streetlamps, there are jack-o-lanterns in the second story windows. I need to count them this year. Will there be 100? 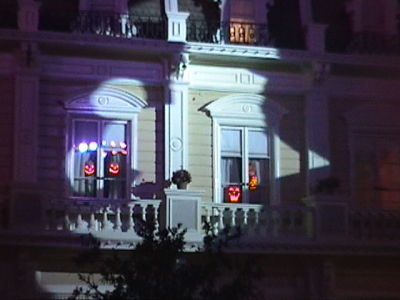 A spooky silhouette flies by jack-o-lanterns. Photo by Mike Scopa. 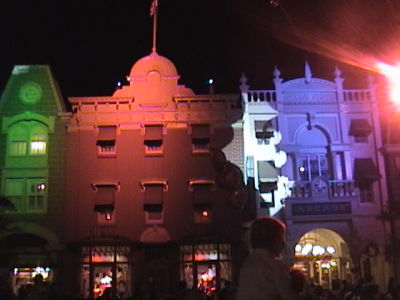 Main Street USA is fun to look at. Keep in mind that the lights and jack-o-lanterns, and silhouettes will be there all evening so don't spend too much time on Main Street when you first come into the park. There's a lot to see and do.

One of the most appealing features of Mickey's Not So Scary Halloween Party is the opportunity to meet and greet with some characters that you normally would not get a chance to meet. In fact during the course of the party you will have the opportunities to meet with over 50 characters so don't forget the autograph book.

There is usually one location within the Emporium devoted to Mickey's Not So Scary Halloween Party merchandise. It is usually safe to wait until you are leaving the park to do your shopping, as it is highly unlikely they will run out of this merchandise.

There was a big difference in the Boo-To-You parade from 2004 to 2005. This refurbishing of the parade was a huge improvement. The parade was longer, the floats were better, there were more characters, and much more energy. 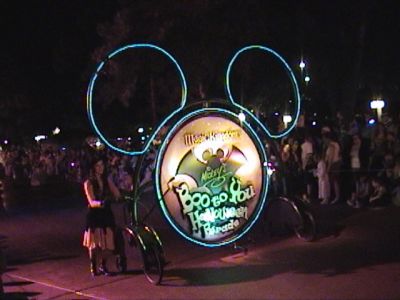 The parade is shown twice on party nights, usually around 8 and 9 p.m. and of course the big draw is the ride of the Headless Horseman to begin the parade. To best see him, grab a spot on Main Street USA.

If you have young children, be sure to try and catch the early parade because your little goblins may tire out right after the fireworks. However, if you have older children or no children, then I suggest avoiding the early parade and seeing the later performance. Less people means more spots.

Oh, and if you want to take photos, take them either on Main Street USA or in Frontierland on the mercantile side. There are auxiliary lights that pop up behind you for better photo conditions.

The Haunted Mansion float with the hitchhiking ghosts is something to see. The real stars of the parade are the 20-some odd undertakers who walk the parade route with their handy shovels. Does anyone know how I can become one of those guys for one of these parades? I love what they do.

And there's the candy. As you enter the park that evening, you will be handed a special orange bag to do your trick or treating. There are about 16 or so places to get candy with each location marked by a special lighted balloon. Don't worry, you won't miss it. 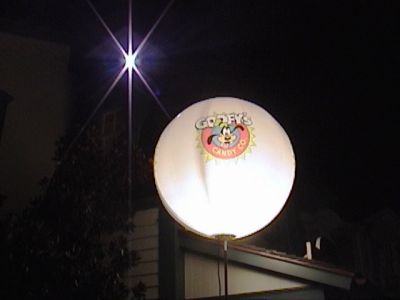 I think all the locations give out the same candy although a little bird told me to not miss out visiting Pooh's Playful Spot for the best "stuff."

Besides the candy you can also get your complimentary photo taken. I'd do this early in the evening or during the early parade to avoid the long lines.

The last two years have seen two different fireworks displays for the MNSSHP and the question is what to expect this year.

I have to admit that last year's rendition was a bit better than the year before except that I was not too thrilled with the music. It seemed they could have done a better job as it sure sounded like someone popped in a CD with their own favorite mix and played it with no synchronization to what was going on in the nighttime sky.

Hopefully it's better this year but hey, are we ever disappointed with fireworks? 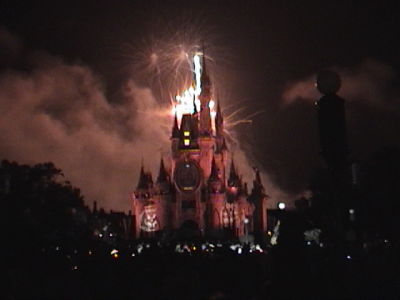 The Mickey's Not So Scary Halloween Party fireworks display is not to be missed. Usually, because of the two parade performances, the fireworks spectacular takes place around 9:15 to 9:30. Check your brochure for the exact time.

To best see these fireworks try to find a comfortable location on Main Street USA. You really need to see the castle and the images that are projected on it during the show.

I don't know if this will happen this year but if the Liberty Square Riverboat returns guests may have the option of taking a haunted riverboat ride.

Most Popular Mickey's Not So Scary Halloween Party Attraction

You can bet that everyone who enters the park on Mickey's Not So Scary Halloween Party nights have the Haunted Mansion on their list of attractions to see.

So think about the lines and waiting time you will be looking at to see 999 ghosts. Your best bet is to visit the Haunted Mansion right about the tike the Boo-To-You Parade is about to hit Liberty Square. That will offer you the shortest wait time of the evening.

Is it Worth It? I think so. It's sort of like Hoop-Dee-Doo, a dinner show at Fort Wilderness. It's worth doing at least once. I'm sure if you added this to your vacation plans it will go a long way towards helping you...