Remember that saying, "What you see is what you get"? That's probably one way of describing Stacey J. Aswad.

You may think you don't know who Stacey J. Aswad is but, guess what? You're wrong! Actually, you may have seen Stacey quite a lot over the last several years especially if, since 2005, you have stayed in a Walt Disney Resort and at some point turned on your resort room television.

Aswad is the current host of "The Top Seven Must Sees in Walt Disney World," a show you will find every time you turn on your Walt Disney World resort room's TV set. Click! There's Stacey, giving us the latest news on the hottest attractions awaiting us during our stay. 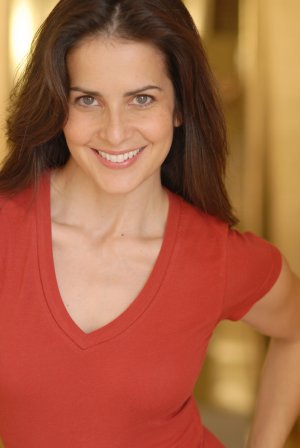 If you have ever seen the Top 7 Must See show while staying on WDW property, Stacey's face should be familiar to you. Courtesy Stacey Aswad.

Irritating? Possibly to some. Entertaining? Oh yes. However, after getting a chance to talk with Stacey another word keeps popping into my mind: Delightful!

I had the opportunity and pleasure of talking with Stacey recently and immediately understood how she had been selected to be the spokesperson for the must see show. She is one of the most charming, witty, and genuine people you would ever want to meet. From the first moment on, it was very clear why she was selected to host this show.

The tone and excitement in her voice immediately told me that for her there is only one way to approach life: Never settle for anything less than 100 percent of what you can give to your day.

Aswad hails from the snow capital of the Northeast, Binghamton, New York, and to this day will tell you that she loves snow and ice—something she won't see much of living in Southern California.

I had so many questions for her so I started with the obvious, which was how she managed to land this Walt Disney World TV gig.

It all started just over two years ago. While living in Charlotte, North Carolina, Stacey received a call from her agent telling her of an audition for an infomercial being held in Atlanta. Following the audition and as she was about to leave Atlanta, Stacey called her agent, who then told her there was going to be an audition the next day for a Disney hosting gig and that Stacey was being requested to come in for it.

The casting director for this Disney gig agreed to put her "on tape" right then to save her a drive back the next day. So, wearing the totally wrong clothes and taking a few minutes with the audition copy, she gave it her best shot.

On this day she ended up wearing a pair of shorts over a bathing suit. If she only knew how this day would change her life forever.

Stacey was required to read from a script, a sample from the actual copy slated to be used on the show. Then she was sent into the waiting room with new copy to memorize in a few minutes and come back in to perform for the director, Tom DeNolf. She had happened to be given the copy that focused on a favorite WDW spot of hers, Blizzard's Beach's Summit Plummet.

She wasn't sure how well she was received but was confident that she had given it her all and just hoped for the best. Apparently it went really well, because she got a callback and was asked to return with a few others for another audition. That meant another drive to Atlanta. It meant another day of reading copy and another day of wondering where all of this would go.

It was on the way back from Atlanta that Aswad received a call from her agent telling her that she had made yet another cut and that she was one of a few preferred candidates with one or two others out in California. Soon there would be just one.

The call came on Easter 2005. Aswad received a call from the casting director personally because it was a holiday and Disney could not get her agent on the phone. She had made the final cut and was selected to be the spokesperson for this Disney gig! To say she was excited was an understatement. The scream she let out when she found out pretty much said it all.

Aswad admits she was a bit scared when she found out she had been given the role. She knew that the role came with the responsibility of putting forth a quality performance. However, being self-confident, Aswad didn't doubt her ability. She knew this was possibly going to be a big deal, but never dreamed it would turn out as to be such a significant deal for her.

But there was no time to celebrate; she had to go to work right away and learn a script—a huge one. She was sent some 25 pages to digest and learn. The script had so much detail that she was really nervous about learning it. Aswad recognized that Disney was a very demanding organization, and that quality was of the utmost importance.

Stacey left for New York City the next morning to visit her family, a trip that turned out to help her prepare for her debut. She recalled how supportive and helpful her family was. For example, her father would would ask her a question about WDW out of the blue, and that would trigger Stacey into one of her routines. Her 7-year-old nephew was also helpful. He would yell "action" and she would jump into the script, and he would yell "cut" when she made a mistake.

Stacey says at first the job ahead of her seemed "daunting" but that she knew that she could do it. Obviously she was right.

So what does it take to shoot that show? A normal shooting day is quite long. The first version of the show was especially so. She was usually picked up at her resort anytime between 5 and 6:30 a.m. and immediately whisked off to the park in which they were shooting that day. Then of course there is wardrobe and makeup before the filming got underway.

Most of the filming took place prior to park opening. Imagine riding Space Mountain at 5:30 a.m. Stacey did. When necessary, extras were brought in to simulate guest activity. Filming usually took place from 7:30 in the morning until lunchtime. The work continued after lunch, with usually a few more hours of improvisation and set shots before calling it a day.

She jokes about how there were times when she thought she was a bit too vibrant or perhaps over the top. However, her director would say, "We need even more of that, Stacey."

Each show usually takes seven days of shooting upwards of 14 hours per day. Add another day for wardrobe and a couple days for travel and there and you can see how it can take about 10 days to put together one show.

Stacey is grateful for her dance background, which was instrumental in helping her stamina wise. Beyond the athleticism of dance, Aswad also spent many years in the field of artistic roller skating. In fact, she is a five-time National Competitive Artistic Roller Skating champion. The sport is very much like figure skating or ice dancing. 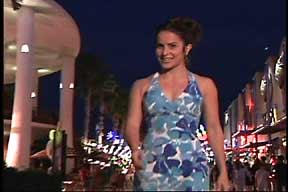 Stacey in one of the Walt Disney World's Top 7 Must See programs. Courtesy Stacey Aswad.

Aswad remains pretty busy, and still considers herself very fortunate to have been selected as the host for the show. As a result of her WDW show, Stacey was contacted by Richard Kraft, a Hollywood film music agent.

It was Aswad's looping WDW "Must See" show endlessly looping in Kraft's WDW resort room that inspired Kraft to create a film entitled, "Finding Kraftland" (link). Kraft teamed up with filmmaker Adam Shell for this project and together they co-wrote and co-directed the film.

Step one in this process was to locate Stacey J. Aswad. In his own words Kraft described Aswad as the "hyper-energetic host" that he knew he wanted as part of his film.

They eventually found Stacey and flew her out to Los Angeles for some filming. "Finding Kraftland" has won recognition in a few film festivals. To read more on this particular project go to Kraft's Web site (link).

Stacey has been a series regular on the TBN series, "7th Street Theater" and is currently serving as the on-court host for the WNBA's Los Angeles Sparks and can also be seen on a few national commercials for Selsun Blue products and Safeco Insurance.

You can look for her this February in an upcoming movie entitled, Me & You, Us, Forever.

Before our conversation came to a close, I asked her what her favorite WDW attraction was, her favorite WDW restaurant to visit, and her favorite WDW snack. These were tough choices but Stacey loves Rock ?N' Roller coaster in the Disney/MGM Studios as well as Blizzard Beach's Summit Plummet. Her favorite restaurant is Restaurant Marrakesh in the Morocco pavilion at Epcot's World Showcase with Canada's Le Cellier being a close second. When it came to snacks, Stacey mentioned the crepes in the France pavilion, also in Epcot. 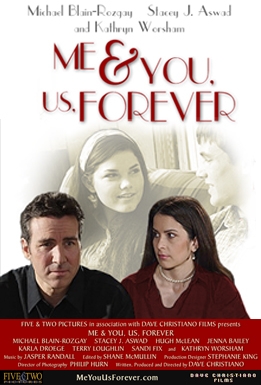 At the end of this interview I felt energized... I felt... invigorated... .I felt... heck... like I had just turned on the TV set in my WDW resort. It was obvious that the short time I had spent with this charming young woman her personable approach had basically resulted in her helping me...

If you want to learn more about Stacey J. Aswad and upcoming projects you can visit her Web site (link).

Speaking of World Showcase, I have some thoughts. I'll share them next we meet.