Orange County, California, isn't the same place I grew up in in the early 1970s. I was raised in central O.C., feeling as if I were straddling two completely different worlds. To the south were miles and miles of undeveloped land. Irvine was basically a wilderness best known for its Lion Country Safari, where guests drove their own cars past free-roaming lions and elephants. (Ask me some time about the hippo that escaped and brought traffic to a halt on the nearby San Diego Freeway.)

To the north was the Magic. Namely Anaheim. Disneyland, of course, was its epicenter. But the city also had Angel Stadium, a popular miniature golf course across the street from Disneyland, and behind the adjacent Saga Motel, the 99-seat Old Movie Theater. Here, for a buck, a movie buff kid like me could spend the evening with Laurel & Hardy or the Marx Brothers (the mini golf was leveled a few years ago and the movie theater gutted two decades before that. It's now a wing of motel rooms).

My dream was that one day my family would sell our tract home in Costa Mesa, a mile from the beach, and permanently relocate to a motel on Harbor Boulevard. Ah, heaven—a swimming pool with a view of the Matterhorn.

But the North County magic didn't end in Anaheim. A few miles away was Beach Boulevard in Buena Park, Disneyland's version of Orlando's International Drive. Down the street from each other you had Knott's Berry Farm, the Alligator Farm, Japanese Village & Deer Park, and—my favorite—Movieland Wax Museum.

Anyone who has never visited the museum—or, worse, has only visited in recent years—probably doesn't understand how this house of wax could ever be popular. The concept—hundreds of movie characters, from Garbo to Frankenstein, frozen in wax—does sound a little creepy. But back in its heyday, in the late 1960s and 1970s, Movieland was like Tinseltown South. Remember, we didn't have VHS, DVD, on-demand movies, or cable channels. Watching a movie on TV was less frequent—as well as tiny, black-and-white, and with commercial interruptions. Theater screens and the movie stars on them were gigantic. Hollywood was a glamorous, faraway place, and it was a thrill to be able to walk past scenes from our favorite movies, inches from real, live actors. Okay, not real or live, but close enough for those low-tech times.

About once a year, when Movieland added a new figure, its flesh-and-blood celebrity counterpart usually would be on hand for the unveiling. Mary Pickford, Jerry Lewis, Buster Keaton and others donated pieces of their actual wardrobe. When Movieland enshrined the Three Stooges, they staged a massive pie fight. For added prestige, Movieland built a faux art museum next door, with wax re-creations of scenes from famous artwork. 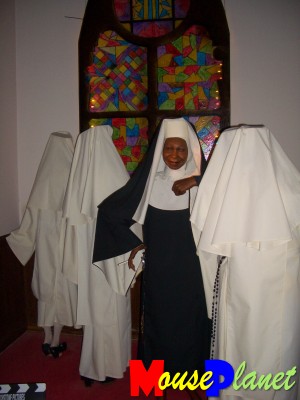 Sister Act II, the most recent of the four Disney scenes, is a more elaborate than most of the newer scenes, but still reeks of penny-pinching. The other nuns face away from the guests, so we can't see that they've been “repurposed” from another scene, and the “stained glass” window looks like it was made with crayons and a sheet of plastic. Photo by David Koenig.

Unfortunately, the place seemed frozen in time. And, come Monday, October 31, they're closing the museum doors forever. My childhood memories will be getting just a little bit smaller.

To be honest, I'm not surprised Movieland is closing. Remember, Disneyland has trouble getting a crowd for Mr. Lincoln. Now imagine if he just sat there.

I had been expecting Movieland to fold since the last time I visited, on a lark, maybe eight years ago. I hadn't been in maybe 15 years before that. The depressing visit was like poking around Grandma's attic, blowing the dust off long-forgotten photo albums and realizing that the past wasn't quite as pretty as the pictures in my head. The museum's basic layout was the same, but the wax characters hadn't aged well. The place looked dingy, ragged, tired. The newer figures weren't placed in elaborate sets, such as the half-submerged ship in PT 109, the chariot race tableau from Ben Hur, or the gladiator battle from Spartacus. Most of the newer characters were just queued along the wall, like they were appearing in a police lineup instead of a movie. What few updates were made were typically taking an old figure and redressing him for a more recent role—like exchanging John Travolta's white disco suit for a dark suit like he might have worn in Get Shorty.

I was appalled. I fully expected the owner to torch the place for insurance money, leaving behind 300 movie stars melted down to their kneecaps.

Fears aside, when I heard news of its closure, I decided to pay my respects. It didn't hurt that they're only charging $5 a head during the final weeks.

As I bought my ticket, I told the fellow in the window that I was sorry to see the place go. “Me, too,” he sighed, sadness in his starstruck eyes. “We thought we were just getting a new owner. We didn't know they were going to tear it down.”

Once inside the familiar lobby, I was hustled into a seat next to George Burns for a souvenir photo (marked down to $1.95). Then it was into the low-lit halls for one last visit with some old friends. Mary Pickford and Douglas Fairbanks in Taming of the Shrew was still the first scene you saw—odd, I thought, since few people under 90 have ever heard of them. It was a nice touch, though, when I read the plaque and realized that Ms. Pickford was on hand for the grand opening of Movieland in 1962.

I was curious which forgotten film giant was next. Instead there was Tom Selleck from Magnum P.I., posing on the beach in his suit from Three Men and a Baby. There were plenty of jarring transitions. After a long string of familiar scenes, like Gene Kelly in Singin' in the Rain or Yul Brunner in The King and I, there would be an inferior addition, like the Olsen twins on the old Laugh-In stage.

Worst of all were the bizarre characters I suspect paid for their own likenesses—Vidal Sassoon in front of a salon, talk show host Christina Saralegui sharing a gazebo with Julio Iglesias, Jennifer Lopez in the beloved classic Maid in Manhattan, Gavin McLeod on the deck of The Love Boat, Levar Burton (PBS's Reading Rainbow) looking like he was working at a garage sale.

Most of the newer characters were also inferior reproductions. Snow White and the Two Dwarfs were hideous. Leslie Nielsen was unrecognizable. Obviously, Blaine Gibson is not on the payroll.

Nonetheless, unbelievably, I really enjoyed my visit. Everything looked cleaner and more presentable than I remember. There was plenty to see—nearly 150 different sets. Attendance was heavy, with camera flashes going off continually. All of which makes Movieland's closure even more depressing. Maybe, just maybe, this place could have been saved.

First of all, any figures unrecognizable to 90 percent of visitors should have been removed. Sorry, Norma Shearer and Slim Summerville. Also they should have booted anyone whose once-great popularity has completely disappeared. Goodbye, Lou Grant, Hulk Hogan, Mr. T and Billy Ray Cyrus. Sometimes less is more. Think of all the space they'd free up by evicting Roseanne from her kitchen.

Next, they should have installed not only famous actors from famous movies, but ones with exotic environments. Why can't we explore that treacherous jungle or ancient cave with Indiana Jones? Or climb with Spider-Man along the face of a 100-story tall skyscraper? Where are Lord of the Rings? Harry Potter? The Simpsons? 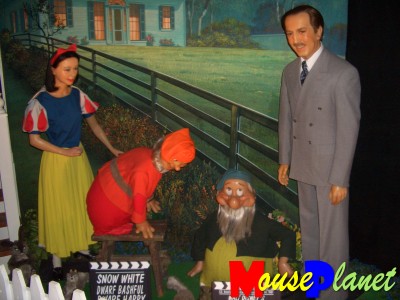 The low light of my trip—Uncle Walt feigns amusement at two strange creatures, for some reason named Bashful and Happy, and a Snow White who looks like a bad department store mannequin. Photo by David Koenig.

Most of all, lots of these exhibits should have been interactive. Where's the John Wayne shooting gallery? I don't want to see James Bond posing all pretty; I want to sit next to him in a car chase. Why are there no shows?

The obvious answer is that Movieland's current owners didn't want to sink any more money into the place. They also own the Ripley's Believe It or Not museum in Buena Park (which is also closing) and a more successful wax museum in San Francisco (which will inherit many of Movieland's displaced figures).

The whole affair makes me think of, naturally, old movies. Whenever I watch a silent movie shot 80 years ago in Los Angeles, I see a bright, hopeful town, with open lots and orange groves as far as the camera could see. I think how lucky it must have been for Grandma to live in such a magical place and how sad it must be for her to see how progress has bulldozed her past. Then I imagine years from now, my children or their children stumbling across my old postcards from the wax museum and thinking the same things about me.